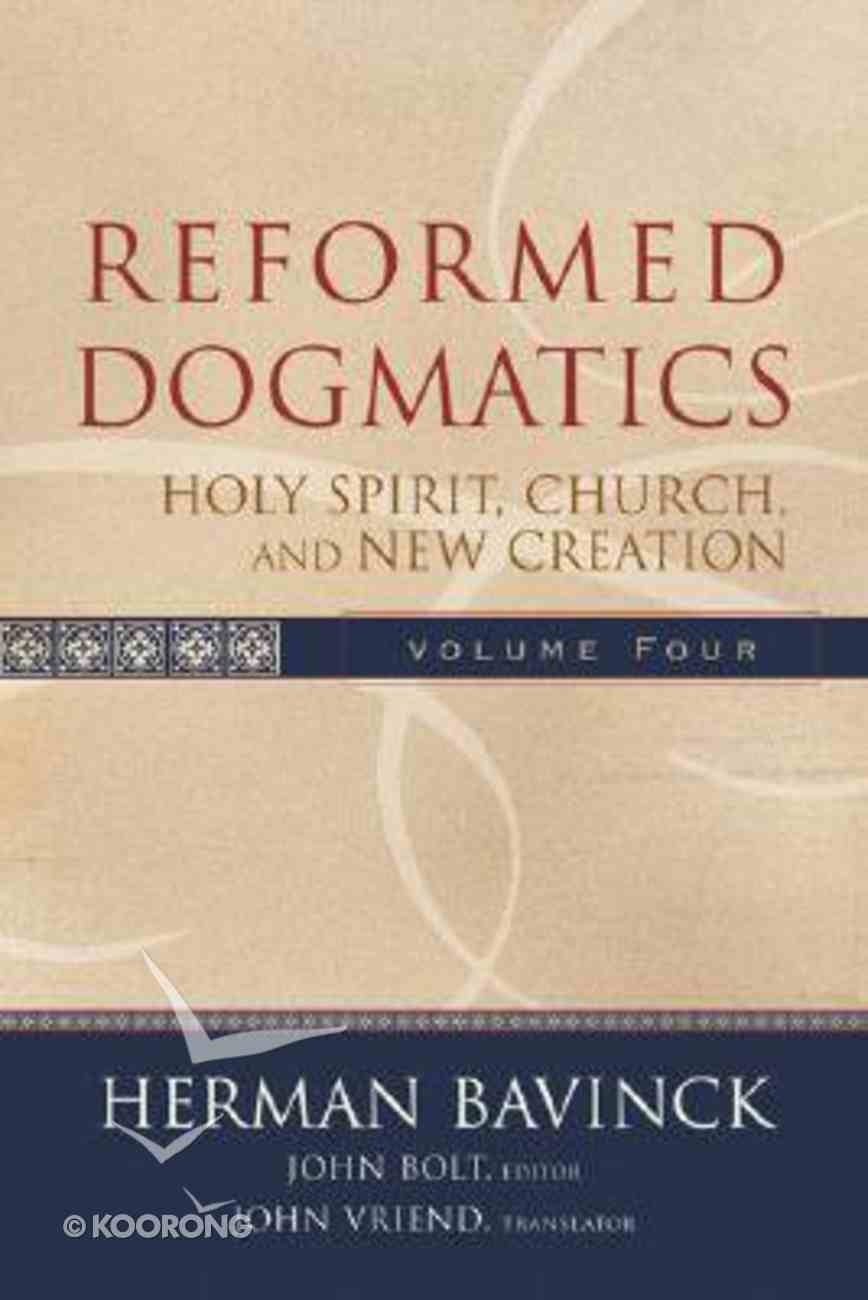 Reformed Dogmatics, vol. 4: Holy Spirit, Church, and New Creation In partnership with the Dutch Reformed Translation Society, Baker Academic is proud to offer in English for the very first time the fourth and final volume of Herman...

In partnership with the Dutch Reformed Translation Society, Baker Academic is proud to offer in English for the very first time the fourth and final volume of Herman Bavinck's complete Reformed Dogmatics, now also available as a four-volume set. This volume includes the combined indexes for all four volumes. In addition, editor John Bolt introduces each chapter and has enhanced the footnotes and bibliography. This masterwork will appeal not only to scholars, students, pastors, and laity interested in Reformed theology but also to research and theological libraries.
-Publisher

"For those struggling with the most critical issue facing theology today, namely, the question of the truth of the Christian faith, this volume is a godsend. . . . To read it is to take a large step back from the theological currents that swirl around and through the theological academy. . . . While the content of [t]his volume is identical with the original, the layout in the translation renders the material far more accessible. . . . Most helpful of all are the splendid chapter synopses that have been crafted with obvious care by the editor and inserted before each chapter. . . . The translation is eloquent, lucid, and faithful to the original."--George Vandervelde, Calvin Theological Journal"Bavinck's serious engagement with the biblical text, the history of Christian theology, non-Christian thought, and with other non-Reformed theological traditions, particularly Roman Catholicism and liberal Protestantism, makes for enjoyable theological reading. . . . The translation of these volumes into English is a welcome addition to the resources for study of Reformed theology. . . . Those who desire to understand the faith once for all delivered to the saints will be rewarded by a careful and systematic reading."--Glenn R. Kreider, Bibliotheca Sacra"Bavinck's Reformed Dogmatics has been the fountainhead of Reformed theology for the last hundred years. It is by far the most profound and comprehensive Reformed systematic theology of the twentieth century. The reader will be amazed by Bavinck's erudition, creativity, and balance. Bavinck is confessionally orthodox, but he recognizes the need to rethink the traditional formulations from Scripture in the context of contemporary discussion. I hope it will have a large readership and will bring forth much theological and spiritual fruit."--John M. Frame, Reformed Theological Seminary"This magisterial work exhibits Bavinck's vast knowledge and appreciation of the Christian tradition. Written from a Reformed perspective, it offers a perceptive critique of modern theology. . . . Recommended for university, church, and seminary libraries because of its historical importance."--Augustine J. Curley, Library Journal
-Publisher