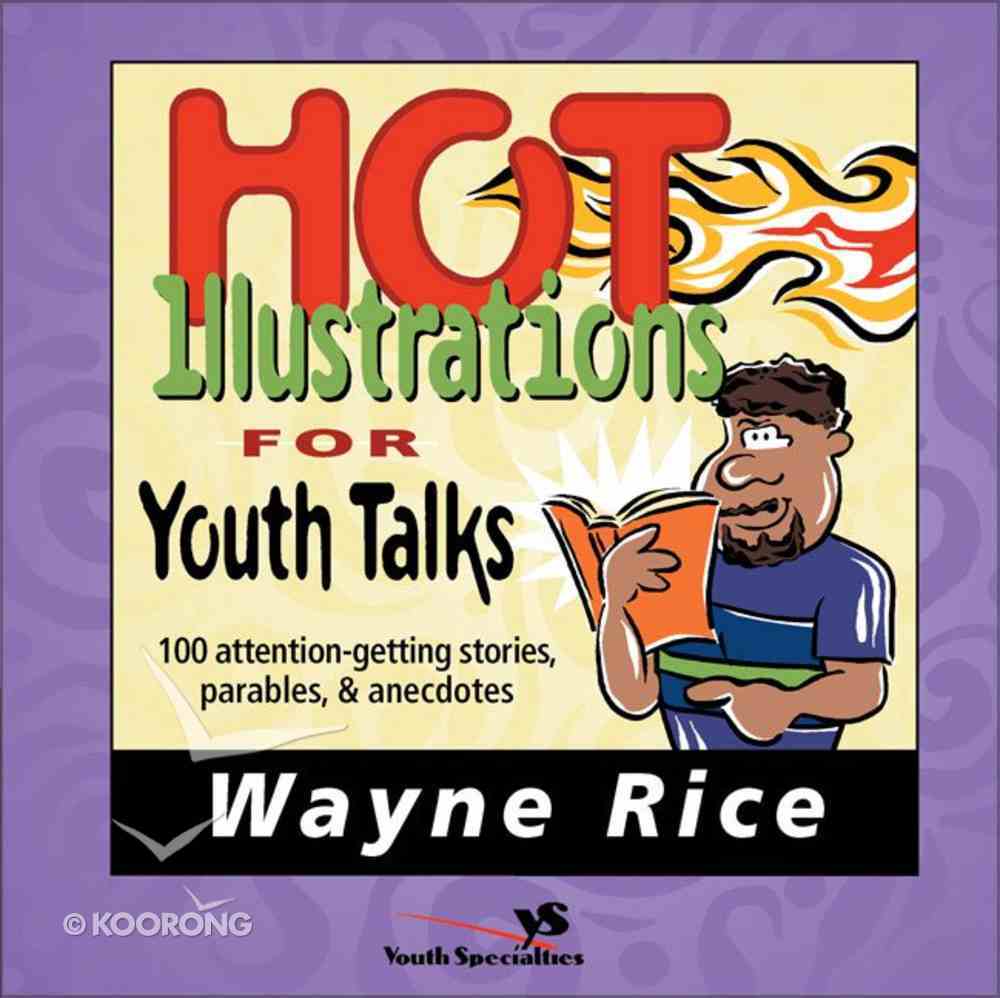 These 100 lively stories, parables and anecdotes are guaranteed to grab teenagers attention! Each illustration was contributed by a veteran youth worker and includes a thought-provoking biblical application. 235 pages, from Zondervan.

2 available
Expected to ship within 3 hours from Australia.
Learn More
Free Shipping
for orders over $99.

The Power of a Praying Teen
Stormie Omartian
Paperback

These 100 lively stories, parables and anecdotes are guaranteed to grab teenagers attention! Each illustration was contributed by a veteran youth worker and includes a thought-provoking biblical application. 235 pages, from Zondervan.

Your search for lively illustrations to spice up your youth talks is over. Hot Illustrations for Youth Talks is here! Veteran youth worker and nationally known speaker Wayne Rice has carefully selected and crafted 100 of the best stories, parables, and anecdotes available anywhere. Rice has collected these illustrations form his own files and from files of some of youth ministry's best speakers -- Mike Yaconelli -- Tony Campolo -- Dewey Bertolini -- Chap Clark -- Les Christie -- Ray Johnston -- Len Kageler -- Rick Bundschuh --- and many more! These stories (all indexed by topic) cover a lot of youth ministry ground -- some will make you laugh, some will make you cry, and all of them will make you think. And they all work with teenagers. They're just the thing to give your youth talks that extra spark you're looking for. You'll love what Hot Illustrations for Youth Talks will do for your youth talks. And your kids will love you for it!
-Publisher

Veteran youth worker and nationally-known speaker Wayne Rich has carefully selected and crafted 100 of the best stories, parables and anecdotes available anywhere. These illustrations cover the spectrum - some will make you laugh, some will make you cry, and all of them will make your think. What they all have in common is that they work with teenagers.
-Publisher


His other books include Read This Book or You're Grounded; Enjoy Your Middleschooler; Hot Illustrations for Youth Talks;Reinventing Youth Ministry (Again)From Bells and Whistles to Flesh and Blood and Up Close and Personal (an ECPA Gold Medallion winner). With Ken Davis, he created the video curriculum Understanding Your Teenager. An accomplished musician, Rice has played and recorded albums with several different bluegrass bands. He currently hosts Bluegrass Special weekly on KSON in San Diego.

Nathan the prophet was the guest speaker. King David was the audience. Nathan had a message from the Lord to deliver to David, and, being theexcellent communicator that he was, he opened with a story: There were two men in a certain town, one rich and the other poor. The rich man had a very large number of sheep and cattle, but the poor man had nothing except one little ewe lamb he had bought. He raised it, and it grew up with him and his children. It shared his food, drank from his cup and even slept in his arms. It was like a daughter to him. Now a traveler came to the rich man, but the rich man refrained from taking one of his own sheep or cattle to prepare a meal for the traveler who had come to him. Instead, he took the ewe lamb that belonged to the poor man and prepared it for the one who had come to him (II Samuel 12:1-4). The story, of course, had King David on the edge of his seat. He took it seriously and responded with gut-wrenching emotion: 'As surely as the Lord lives, the rich scoundrel who took that little lamb deserves to die!' Bingo. The rest of Nathan's message required few words. All he had to do was apply the story to his audience: 'You, sir, are that man.' Nathan knew what every good speaker and teacher knows: a picture is worth a thousand words. A captivating illustration that is thoughtfully chosen and skillfully used communicates more, is remembered longer, and has greater impact than thousands of words that may be truthful and important, but which are abstract and tell no story. Jesus knew the value of a story, too. He spoke in parables. In fact, Matthew 13:34 records that Jesus never spoke without using a parable. He consistently sprinkled His talks with stories and illustrations to drive home the point He was making. He drew His illustrations from everyday life in the Middle East, describing farmers and families, sheep and goats, barns and wheat fields. People were amazed at His teaching. Unfortunately, amazing is not often the word that teens use to describe speakers and teachers in the church today. The word boring seems to be more in fashion. A few popular speakers, however, know how to communicate well with kids, and invariably they use stories and illustrations effectively in their talks. Hot Illustrations is a selection of stories that have been used effectively in youth talks by several of those popular speakers. I have used many of them myself. All of them can work with kids if the stories are chosen properly and communicated with conviction and purpose. This is not an exhaustive collection of illustrations for youth talks. The books that claim to be exhaustive are often so large that they are difficult to use. One book on my shelf boasts nearly eight thousand illustrations in it. But to be honest, it's difficult to find one good illustration in that book when I need it. My goal for this book has been to offer you quality rather than quantity. Selecting and using illustrations is a subjective and personal task; what works for you may not work for me (and vice versa). Even so, this book offers you a sampling of illustrations that I recommend without reservation. Much of that has to do with the quality of people who contributed to this book. (Their names are listed on pages 7 and 8). Good illustrations are extremely valuable and hard to come by. Many speakers prefer keeping them to themselves. That's why I'm grateful for these contributors who were willing to share some of their best illustrations with us. AIM TO HIT YOUR TARGET The most important thing to remember as you use the illustrations in this book is that they are only illustrations. They are not the points to be made. In other words, don't build your talk around these or any other illustrations. Begin with the point (the truth) that you want to communicate, and then find or create the illustration that supports that point. A young boy received a bow and arrow from his father and immediately went outside to shoot it. A few minutes later, his father went outside and saw that the boy had shot his arrows at several targets that had been drawn on the side of a fence. To his amazement, each arrow had hit a bull's-eye. The father was impressed and said to his son, 'I didn't realize you were such a good shot!' The boy replied, 'Oh, it was easy. I shot the arrows first; then drew the targets around them.' When you use illustrations simply because they are good illustrations, you are drawing targets around your arrows. Begin planning a talk by deciding what the point (the target) is. Enhance the talk with an illustration only if it effectively drives home that point. Keep in mind that it takes different kinds of arrows to hit different kinds of targets. In the same way, be selective in filling your quiver with illustrations. With each illustration in this book, I have suggested one or two points that can be supported by the illustration. Every illustration has multiple applications. A list of general topics that will help you to select illustrations more easily can be found in this text.