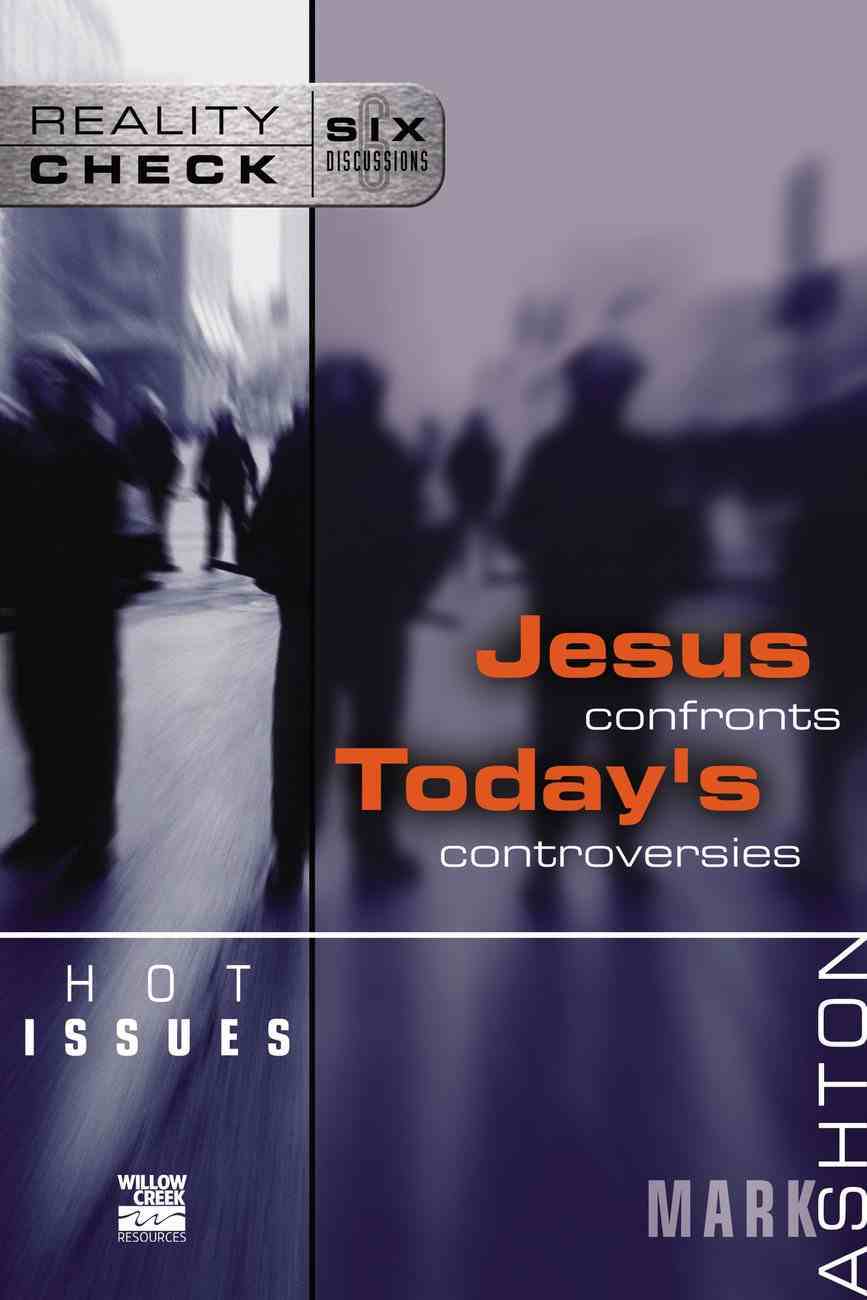 The Reality Check series makes just one assumption: that you're serious enough about your spiritual journey to investigate Christianity with an open mind. This isn't about joining anyone's religious club--it's about being real with yourself and with the others in...

The Reality Check series makes just one assumption: that you're serious enough about your spiritual journey to investigate Christianity with an open mind. This isn't about joining anyone's religious club--it's about being real with yourself and with the others in your group. Since no one has all the answers, there's plenty of room for discussion. After all, if there is any truth to the Bible's stories about Jesus, then one thing he'd welcome are questions and opinions that come from honest, earnest hearts.Have you stopped to consider just how broken this planet really is? Look around you. Poverty, racism, intolerance, materialism, oppression of women . . . it doesn't take long to see plenty that needs fixing. Hot Issues explores six current social evils that affect us all one way or another. They'll come as no surprise--until you explore Jesus' radical responses to the same issues in his time. Hot Issues includes these sessions: The Poverty Line Crossing the Racial Divide Handling Hyp
-Publisher

Six sessions. Discussion guides designed to help people from a variety of spiritual backgrounds discover the powerful life and teaching of Jesus in the context of small group.Jesus on Six Hot Issues: About the manner in which Jesus addressed the challenges of racism, feminism, sexuality, materialism, poverty, and intolerance.
-Publisher

ICEBREAKER Consider the average family that lives on your block. In terms of total family income, where would they rank in comparison to the rest of the country? For example, an answer of 60 percent would indicate that they are wealthier than 60 percent of the nation's population; 90 percent would mean they are wealthier than 90 percent of our country' s population. Mark it on the 'Country' graph on the following page, and explain why you rated it as you did. Now compare your average family to the rest of the world. As you evaluate, consider the following statistics: * Half of the world lives on less than two dollars per day. * Six people die every second from hunger and hunger-related ailments. * Indonesians making shoes earn 16 cents an hour. * Americans spend $8 billion a year on cosmetics and $21 billion on pets. * Nine billion dollars would provide clean water for everyone in the world. * Four-fifths of Americans making over $75 thousand a year would 'like to be rich.' THE POVERTY LINE Make your mark on the 'World' graph above, then explain your rating. Finally, where would you place your average family compared to every family in the history of the world? Explain your mark on the 'History of the World' graph above. Read Matthew 25:31 -- 46 'When the Son of Man comes in his glory, and all the angels with him, he will sit on his throne in heavenly glory. All the nations will be gathered before him, and he will separate the people one from another as a shepherd separates the sheep from the goats. He will put the sheep on his right and the goats on his left. 'Then the King will say to those on his right, 'Come, you who are blessed by my Father; take your inheritance, the kingdom prepared for you since the creation of the world. For I was hungry and you gave me something to eat, I was thirsty and you gave me something to drink, I was a stranger and you invited me in, I needed clothes and you clothed me, I was sick and you looked after me, I was in prison and you came to visit me.' 'Then the righteous will answer him, 'Lord, when did we see you hungry and feed you, or thirsty and give you something to drink? When did we see you a stranger and invite you in, or needing clothes and clothe you? When did we see you sick or in prison and go to visit you?' 'The King will reply, 'I tell you the truth, whatever you did for one of the least of these brothers of mine, you did for me.' 'Then he will say to those on his left, 'Depart from me, you who are cursed, into the eternal fire prepared for the devil and his angels. For I was hungry and you gave me nothing to eat, I was thirsty and you gave me nothing to drink, I was a stranger and you did not invite me in, I needed clothes and you did not clothe me, I was sick and in prison and you did not look after me.' 'They also will answer, 'Lord, when did we see you hungry or thirsty or a stranger or needing clothes or sick or in prison, and did not help you?' 'He will reply, 'I tell you the truth, whatever you did not do for one of the least of these, you did not do for me.' 'Then they will go away to eternal punishment, but the righteous to eternal life.' DISCUSS! 1. What examples does Jesus give to divide righteous and unrighteous behavior? 2. How would you summarize, in one sentence, the difference between the sheep and the goats? 3. In many other conversations, Jesus clearly says that people who trust in him---which means believing he is the Son of God, who died for our sins and rose from the dead---will be in heaven, while those who reject him will not. What do these words from Matthew indicate about the quality of life for those who are faithful to Jesus? 4. When in your life have you had one of these practical needs--- and how did someone meet it? 5. If you've ever helped out at a hospital or a homeless shelter, talked to someone in prison, or invited a stranger into your home, what kind of worries---and rewards---did you have as a result? Read Luke 14:12 -- 14 Then Jesus said to his host, 'When you give a luncheon or dinner, do not invite your friends, your brothers or relatives, or your rich neighbors; if you do, they may invite you back and so you will be repaid. But when you give a banquet, invite the poor, the crippled, the lame, the blind, and you will be blessed. Although they cannot repay you, you will be repaid at the resurrection of the righteous.' 6. Jesus was attending a swank dinner party when he spoke these words to the host. Pretend you're a guest at the party. After Jesus' statement, you can feel the tension gripping the room. What kind of comment might you make to ease the tension? 7. Why do you think it's so rare for people to actually follow this command of Jesus? 8. What can you gather from the above teachings---the sheep and the goats, and the dinner party---about Jesus' heart toward the poor? 9. Imagine that five hundred people agree together to live out this teaching of Jesus in relation to one another and in relation to their immediate community. What might this group look like, and what impact might they have on their community? REALITY CHECK On a scale of 1 to 10, how much does Jesus' vision of how the world could be appeal to you, and why? Given your wealth ranking in comparison with the rest of the world, what do you think your responsibility toward the poor should be? What opportunity could you seize to care for someone less fortunate than yourself in the next week?

Micah: What Does God Require of Us? (6 Studies) (The Good Book Guides Series)
Stephen Um
Paperback