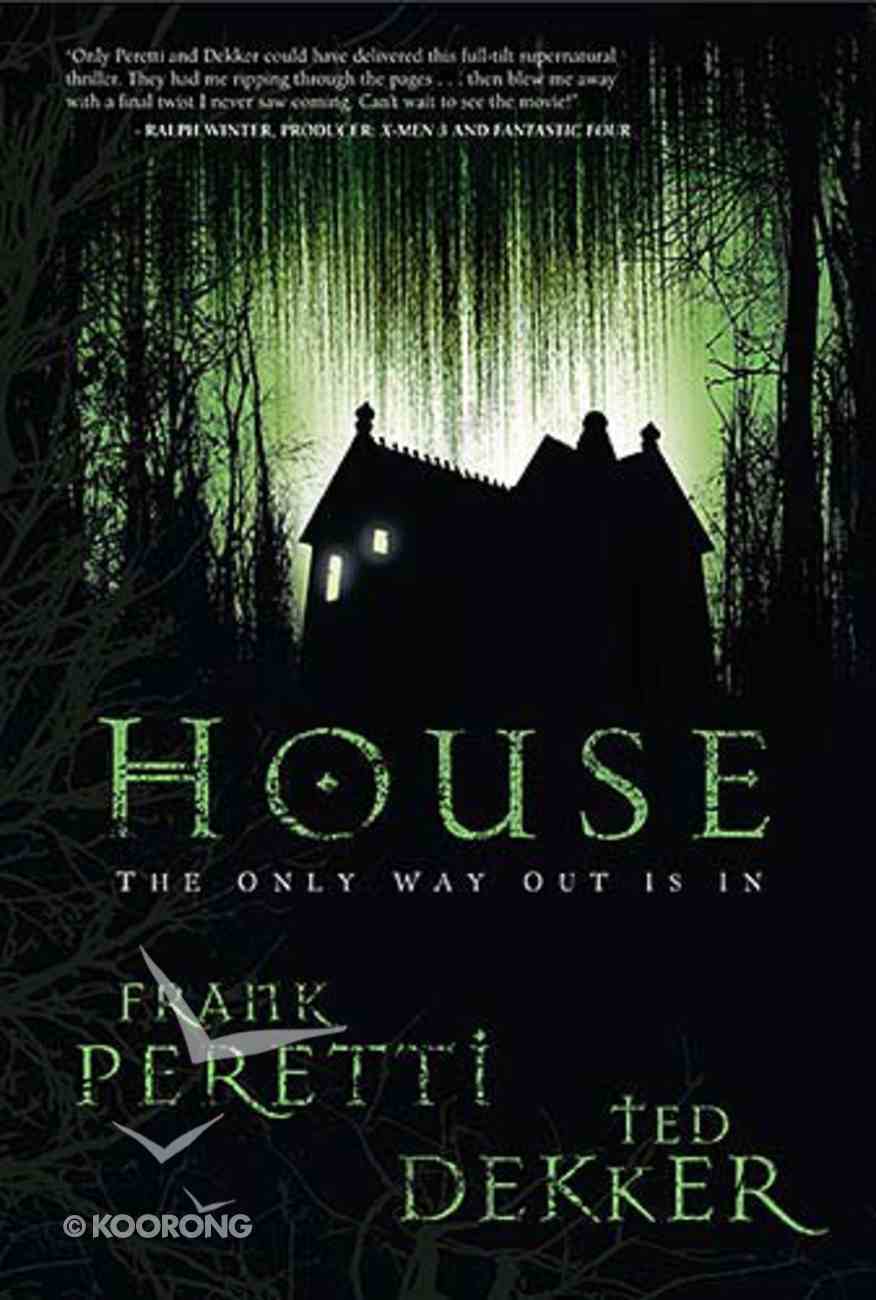 A mind-bending supernatural thriller from the creators of "This Present Darkness" and "Showdown." ^Frank Peretti and Ted Dekker - two of the most acclaimed writers of supernatural thrillers - have joined forces for the first time to craft a story unlike any you've ever read. Enter "House" - where you'll find yourself thrown into a killer's deadly game in which the only way to win is to lose...and the only way out is in. ^The stakes of the game become clear when a tin can is tossed into the house with rules scrawled on it. Rules that only a madman - or worse - could have written. Rules that make no sense yet must be followed. ^"One game. Seven players. Three rules. Game ends at dawn."
-Publisher


He stood motionless in the entryway, staring at his own shadow splayed before him like a stain upon the floor. He studied the patina of dust, sampled the stench of mold and rat urine, listened to a beam settling one more fraction of an inch toward the center of the earth.


This room bore so little evidence of the events that had led to the dawn. From this vantage point, it was just one more abandoned house. Interesting.


But the rest of the house told the truth.


Beneath his boots, the floorboards lay shoulder to shoulder like the buried dead, cupped with creeping moisture, edges buckling, obscured by gray dust and fallen flakes of white paint.


Across the foyer, at the base of a wall, the rose-printed wallpaper fluttered. Behind one of the roses, something scratched, pushed, gnawed, and clawed until a black, whiskered nose burst through. With a wad of shredded wallpaper in its jaws, the rat wriggled through the hole, then rested on its haunches and met his eyes. Neither found the other's presence alarming. The rat skittered along the baseboard and disappeared around a corner.


At the far end of the room, half a tattered curtain rustled and stirred before a broken window. A pitiful attempt at escape. Apart from the broken window, there was no sign that anyone had been here in years.


But when some curious passerby--or the police, should they be so fortunate as to stumble upon this place--wandered farther in, they'd find signs to the contrary in abundance. And those signs would lead them to the mysteries below.


Death lingered in the musty air, even up here. The walls were like shrouds, enfolding every space in exquisite darkness. It had been a perfect arena for a perfect game.


And already Barsidious White was looking forward to the next.


His mind jerked out of a daydream and back to the lonely Alabama highway in front of the blue Mustang. The speedometer topped eighty. He cleared his mind and relaxed his right foot. "Sorry."


Stephanie went back to her singing, her voice clear if melancholy, her inflection classic country. "My heart holds all secrets; my heart tells no lies . . ."


That one again. She wrote it, so he never criticized it, but those awful lyrics, especially today--


The speedometer was inching toward eighty again. "Sorry." He forced his foot to relax.


"What's the matter with you?"


She smiled at him. "You should try singing."


His grip tightened on the steering wheel. "Yeah, that's your answer for everything, isn't it?"


He sighed. He had to quit taking her bait. "Sorry." Always apologizing. He looked her way and forced a smile, hoping she would believe it.


She smiled back in a way that said she didn't.


She was beautiful, enough to capture the next man just as she'd captured him--blond, youthful, a real credit to those jeans--everything the guys in the lounges and bars could want in a country singer. No doubt those blue eyes could still sparkle, but not for him anymore. Right now they were hiding behind fashion-statement sunglasses, and she was craning to see out the back. "I think there's a cop behind us."


He checked the rearview mirror. The highway, which had narrowed to two lanes, curved lazily through late-spring forest and farmland, rose and fell over dips and rises, hiding and revealing, hiding and revealing a single car. It was gaining on them, near enough now for Jack to recognize the light bar atop the roof. He checked his speed. Sixty-five. That should be legal.


A few seconds more and the cruiser filled Jack's mirror as if he were towing it. He could see the cop's iron-jawed countenance behind the wheel, reflective black sunglasses obscuring the eyes.


Jack double-checked the speedometer, then slowed to sixty, hoping the cop wouldn't rear-end them.


He was going to rear-end them!


Jack smashed the gas pedal to the floor, and the Mustang shot ahead.


"What are you doing?" Stephanie cried.


The car fell back ten yards. Its red and blue lights flashed to life.


"Oh, great," she muttered, turning and flopping back against her seat. He could hear the blame in her voice. Always the blame. But you're the one who walked away, Steph.


The cruiser veered into the oncoming lane and pulled up beside them. The uniformed officer turned his face to Jack. Met his eyes. Or so Jack imagined. Black glasses. No expression. Jack forced his eyes back to the road.


The two cars were side by side, locked in formation at sixty miles an hour.


He would if he could. Jack strained to see an opportunity. The forest, a thick tangle of maple, oak, and birch draped with kudzu, encroached like an advancing wall. "I can't. There's no shoulder. I can't just . . ."


He slowed. There had to be a turnout somewhere. Forty miles per hour. Thirty. The cruiser matched his speed.


Jack saw a break in the foliage, a sliver of a shoulder, just enough room. He began to veer off.


The cruiser surged and left them behind, lights blazing in silence. Fifteen seconds later it was a dot on the road between the towering trees, and then it was gone.


"What was that about?" Jack asked, checking his mirrors, rubbernecking, and easing back onto the highway. He wiped a sweaty palm on his jeans.


"You were speeding." She fixed her gaze on the highway, fumbled with a map, avoided his eyes.


"That's Alabama, Jack. You don't do things their way, they let you know."


"Yeah, but you don't ram someone in the tail for speeding."


She slapped her lap, a release of frustration. "Jack, will you please just get us there, legally, in one piece? Please?"


He chose silence over a comeback and concentrated on the road. Save it for the counseling session, Jack. He wondered what she'd been saving up, what new claims she'd unload tonight.


She shook out her shoulders, put on a smile, and started humming.


If smiling and singing could bring back those days, he would laugh like a fool and even sing Stephanie's lyrics, but he was fresh out of illusions. All he had were the memories that stole his mind away even as his eyes remained on the road: her arms about his shoulders and the excitement in her eyes; the inner dawn he felt whenever she entered the room; the secrets they shared with a glance, a smile, a wink; all the things he thought life and love should be--


The accident changed everything.


He imagined himself sitting in the counselor's office, being honest about his feelings. I'm feeling . . . like I've been had all my life.Life is pointless. If there is a God, he's the devil, and . . . What wast hat? Oh, you mean Stephanie? No, I've lost her too. She's gone. I mean, she's here, but she's checked out . . .


He couldn't put away the idea that this whole trip was only a formality, another nail in the coffin of their marriage. Steph would sing her way to Montgomery and back and still get the divorce she wanted, go on her merry way.


With a start, he returned his attention to driving. The Mustang purred along at sixty-five, gobbling up the highway. The forest was breaking up now, giving way to crude homesteads and stump-filled pastureland.


He caught the sarcasm before it escaped. Hurtful words came so easily these days. "What do you mean?"


He glanced at the mirror, then twisted to see the back of the receding sign. "5?"


She studied the map, tracing a route with her finger. "We're supposed to be on Highway 82."


He leaned and tried to read the map. The car swerved. He shot his eyes forward again, corrected the wheel.


Not necessarily. "You see Highway 5 on there? Where does it lead?"


She dragged her finger over the map and stopped about three inches out of Montgomery. "Not to Montgomery, unless you have a week to sightsee. How could you possibly have gotten off 82?"


Dare he defend himself ? "I was a little distracted by a cop eating up my bumper."


She pulled her cell phone out of a cup holder and checked the display clock. "There's no way we'll make it."


Was that hope in her voice? He checked his watch. If they turned around now, maybe--


"I canceled a gig to go to this appointment with you." Stephanie hunched in the seat, arms folded.


Red and blue lights flashed up ahead.


Jack slowed as they approached the patrol car parked just beyond a turnoff. Orange cones and a sign blocked the road ahead."Repaving Operation. Highway Closed to Through Traffic," Jack read. "Well, we have to turn around anyway." Jack pulled onto the gravel shoulder but had a second thought. "Let's ask. Maybe there's a faster way."


Jack eased the blue Mustang forward, up to the turnoff, and stopped a few feet behind the patrol car. The cruiser's door swung open and an officer--the officer--stepped out, aviator sunglasses still hiding his eyes.