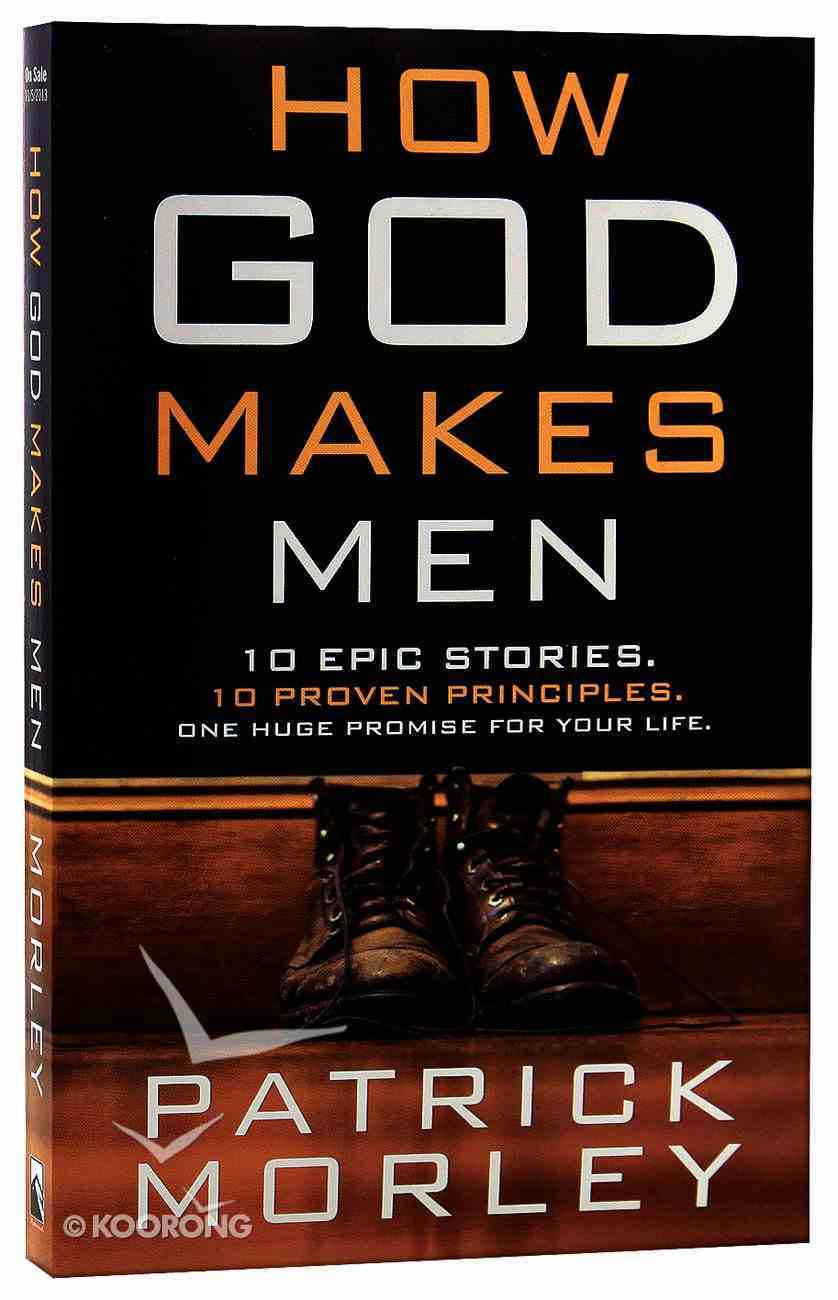 Men's ministry expert Patrick Morley presents ten epic stories of the Bible's most talked-about men, and draws out ten principles based on their successes and failures, showing how God works in a man's life. Readers will learn how to become...

The Christian Man: A Conversation About the 10 Issues Men Say Matter Most
Patrick M Morley
Paperback

Men of Courage: God's Call to Move Beyond the Silence of Adam (Formerly Silence Of Adam, The)
Larry Crabb
Paperback

Men's ministry expert Patrick Morley presents ten epic stories of the Bible's most talked-about men, and draws out ten principles based on their successes and failures, showing how God works in a man's life. Readers will learn how to become the men that God created them to be!

God&rsquo;s Way for You to Become God&rsquo;s Man
&#160;
Let&rsquo;s face it&mdash;men today are under severe attack. The battle line against biblical manhood is clearly drawn and fiercely contested. More than ever, men who want to follow Christ are asking:
&#160;
&bull; Why is it so hard to live an authentic Christian life?
&bull; Who will show me how to thrive as a father, a husband, and on the job?
&bull;What should I do when I&rsquo;m being tested to the breaking point?
&#160;
Fortunately, the Bible preserves crucial details about the powerful lessons learned by men who have already faced and answered these questions. In&#160;How God Makes Men, renowned expert on men&rsquo;s issues Patrick Morley takes you into Scripture for a first-hand encounter with:
&#160;
&bull; 10 epic stories of the Bible&rsquo;s most talked-about men
&bull; 10 proven principles&mdash;based on their failures and successes&mdash;that show how God works in a man&rsquo;s life, and how you can cooperate with Him in yours
&bull; The promise that you&#160;can&#160;become the man God created you to be
&#160;
Don&rsquo;t settle for less. Join Patrick on this epic adventure of becoming God&rsquo;s man. You&rsquo;ll discover how to prevail in tough times and release God&rsquo;s power in every area of your life.
-Publisher

Patrick Morley is the author of bestselling The Man in the Mirror. It was selected as one of the 100 Christian books that changed the twentieth century. After building one of Floridas 100 largest privately held companies, he founded Man in the Mirror in 1991, a nonprofit organization to help men find meaning and purpose in life. Patrick also trains leaders in the marketplace (www.MorleyLeadershipCenter.com). He is the author of 14 books including Walking with Christ in the Details of Life, The Rest of Your Life, and Two-Part Harmony

When I travel and meet strangers, someone will often say, &ldquo;You work with men. That must really be hard.&rdquo;

My response is always the same. &ldquo;You&rsquo;ve got the wrong guy! I have the best job in the world. Every day we see men coming to Christ and growing as disciples. God is powerfully at work in men&rsquo;s lives!&rdquo; With that said, we need to do a reality check. Men today are under severe attack. A counter-Christian pop culture ridicules men in general and Christian men in particular. The battle line against biblical manhood is clearly drawn and fiercely contested. As a result, legions of men struggle to sustain what they started and finish the race.

Because I get to work with men as my vocation, I&rsquo;ve been watching this battle play out and intensify at an alarming rate. Every week at our Bible study, I meet men who have professed faith in Christ but who, for the last five, ten, fifteen, or more years, have been living by their own wisdom. Many were told, &ldquo;Just pray this prayer and everything
will turn out okay.&rdquo; But it hasn&rsquo;t. They enlisted and were issued a weapon they&rsquo;ve never learned how to clean and shoot. These men are not bad, just confused.

Most men I talk with feel like there&rsquo;s another man coiled up inside of them who desperately wants to get out. How about you?

Can you relate? If so, I&rsquo;ve got some really great news for you. It&rsquo;s all wrapped up in the one sentence that best describes my own life: Because God is good, your life will not turn out like you planned. That&rsquo;s because God has a better plan. A much better plan. So what is this plan, and how can you make it your own?

God&rsquo;s plan is made up of strikingly relevant, time-tested lessons written down and preserved for us in the Bible. It pulsates with stories about men who released and sustained the passion of their faith. They became the men God created them to be.

And you can too.

However, it&rsquo;s shocking how many of these life-changing principles are gathering dust. It&rsquo;s as though we&rsquo;re afraid to tell men, &ldquo;Following Christ is harder than it looks and takes longer than expected. But God does have a plan, and it comes packed with real answers and genuine hope.&rdquo;

So in How God Makes Men, I want to share with you the most powerful principles of manhood from ten of the most well-known men in the Bible. In each of their epic stories, we can see the hand of God at work&mdash;shaping them, leading them, making them into the men He always planned for them to become. That &ldquo;always planned for them to become&rdquo; is for you too. And it&rsquo;s one of the main features we&rsquo;ll be exploring together.

How did God mold and mobilize these men? What were the obstacles they faced? What held them back? How did God get them uncoiled? And what was their part? As we spend time listening to their lives, we will come face to face with the gritty truth that can release and sustain the passion of our faith too. When added together, they&rsquo;re not just ten amazing stories but one big story&mdash;yours!

Here&rsquo;s the promise of How God Makes Men. And it&rsquo;s a huge one. If you will absorb and embrace the timeless principles offered by these ten men, you can get past the shallow cultural Christianity that wants to gut your manhood and get to&mdash;or back to&mdash;a more biblical Christianity.

If you will let these ten men mentor you, then, like them, you will become the man God created you to be. You will release the power of God in every direction and detail of your life. You will know how to sustain the passion of your faith. And you will be well on the way to writing your own epic story. Why? Because God is way too good to let our lives merely turn out like we planned!

You always knew that one day you would be called upon to take your place on the battlefront, right? This is that call. Together, we can turn this around. This is a battle we can win. We cannot, we must not, and by God&rsquo;s grace we will not fail.

If this is what you want, turn the page. I have some guys I want you to meet.

You Have What It Takes
John Eldredge
Booklet

Lies Men Believe: And the Truth That Sets Them Free
Robert Wolgemuth
Paperback