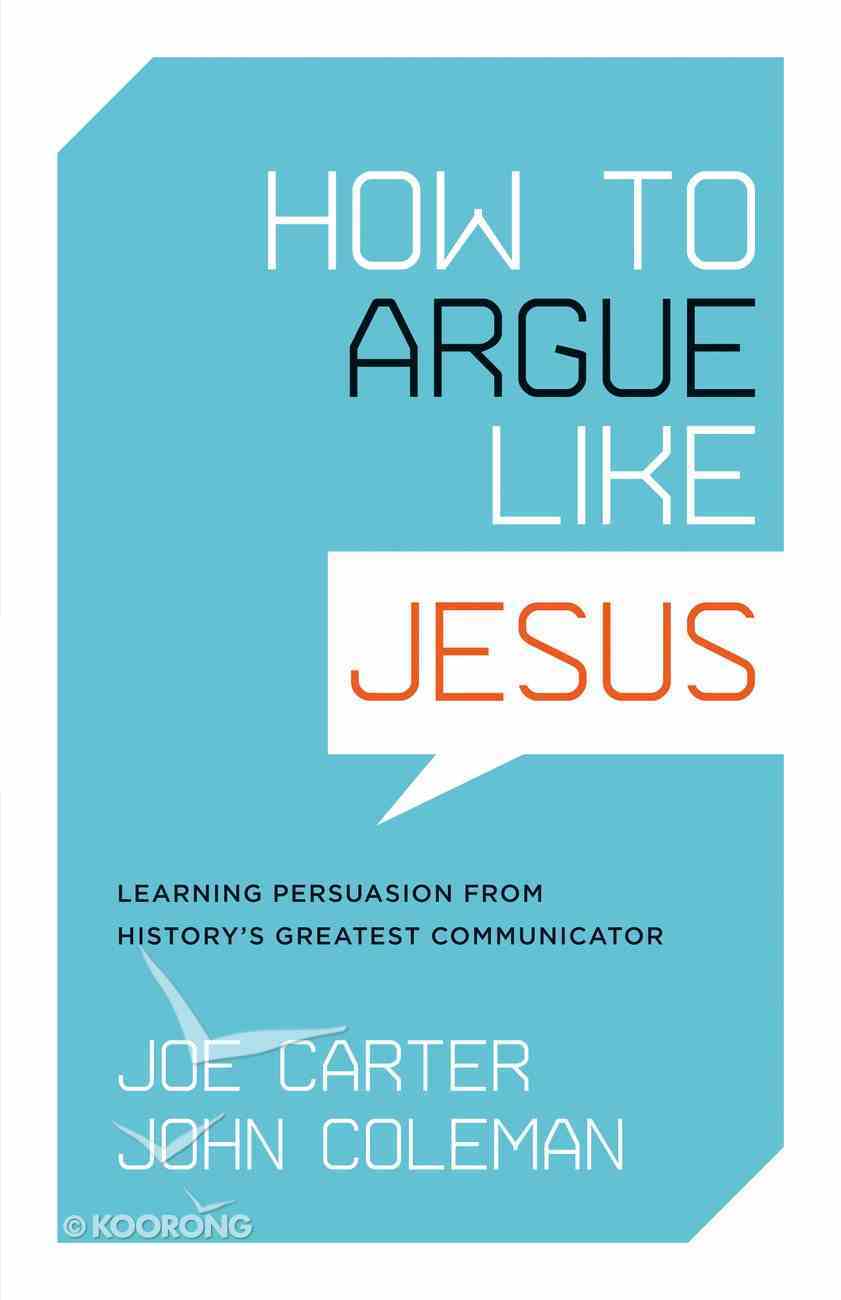 How to Argue Like Jesus: Learning Persuasion From History's Greatest Communicator

^Uses Jesus' words and actions found in the New Testament to systematically evaluate his rhetorical stylings, drawing real lessons from his teachings that today's readers can employ. ^Jesus of Nazareth never wrote a book, held political office, or wielded a...

How to Argue Like Jesus
Joe Carter, John Coleman
eBook

What Jesus Demands From the World: "All Authority in Heaven and on Earth Has Been Given to Me" - Jesus
John Piper
Paperback

The Real Jesus: Challenging What You Know About the Greatest Person Who Ever Lived
Jonathan Stockstill
Paperback

Saints and Scoundrels in the Story of Jesus
Nancy Guthrie
Paperback

What Does It Mean to Fear the Lord?: "How the Fear of God Delights and Stengthens" (Union Series)
Michael Reeves
Paperback

Jesus: The God Who Knows Your Name
Max Lucado
Hardback

^Uses Jesus' words and actions found in the New Testament to systematically evaluate his rhetorical stylings, drawing real lessons from his teachings that today's readers can employ. ^Jesus of Nazareth never wrote a book, held political office, or wielded a sword. He never gained sway with the mighty or influential. He never took up arms against the governing powers in Rome. He was a lower-class worker who died an excruciating death at the age of thirty-three. Yet, in spite of all odds-obscurity, powerlessness, and execution-his words revolutionized human history. ^How to Argue like Jesus examines the life and words of Jesus and describes the various ways in which he sought-through the spoken word, his life, and his disciples-to reach others with his message. The authors then pull some very simple rhetorical lessons from Jesus' life that readers can use today. ^Both Christian and non-Christian leaders in just about any field can improve their ability to communicate effectively
-Publisher

Who is the Messiah? How can we recognize Him? When will He come?Centuries ago prophets spoke of the coming of a great leader. He would be sent by God and would be called Godrs"s Anointed One, the Messiah. The current interest in the state of Israel awakens renewed interest in the Messiah. Here are six descriptions that identify Him: He must be of the seed of Abraham. Moses recorded the promise of God to Abraham in the following way: "In thy seed shall all the nations of the earth be blessed" (Genesis 22:18). He must be of the tribe of Judah. When Jacob was dying, he said to his son Judah: "The scepter shall not depart from Judah, nor a lawgiver from between his feet, until Shiloh come; and unto him shall the gathering of the people be" (Genesis 49:10). He must be of the house of David. In Isaiahrs"s prophecy of the Messiah we read: "Of the increase of his government and peace there shall be no end, upon the throne of David, and upon his kingdom, to order it, and to establish it with justice and with righteousness" (Isaiah 9:7). He must be born of a virgin. The prophet Isaiah wrote: "Therefore the Lord himself shall give you a sign; Behold the virgin shall conceive, and bear a son, and shall call his name Immanuel" (Isaiah 7:14). He must be born in Bethlehem as foretold by the prophet Micah: "But thou, Bethlehem Ephratah, though thou be little among the thousands of Judah, yet out of thee shall he come forth unto me that is to be ruler in Israel" (Micah 5:2). He must be God. Isaiah clearly stated that when he wrote: "His name shall be called... The Mighty God, The Everlasting Father, The Prince of Peace" (Isaiah 9:6).More than two thousand years ago, a child was born in a stable in the town of Bethlehem. He was of the seed of Abraham. He was of the tribe of Judah and the house of David. His mother was a virgin.The Messiah has come!Who is the Messiah? The only one who meets all the requirements is Jesus. As a devout Jew, Jesus lived a remarkable life. He restored sight to the blind, healed crippled limbs, and even raised the dead. He astounded the Jewish leaders of that time by His insight, wisdom, and teaching of the Scriptures. By His words and works He proved Himself to be Godrs"s Anointed One.Then, according to the predetermined plan of God, Jesus gave Himself as Godrs"s Passover Lamb-He died for the atonement of His peoplers"s sins. As the prophet Isaiah predicted: "He is despised and rejected of men, a man of sorrows, and acquainted with grief, and we hid as it were our faces from him; he was despised and we esteemed him not.... But he was wounded for our transgressions, he was bruised for our iniquities; the chastisement of our peace was upon him; and with his stripes we are healed. All we like sheep have gone astray; we have turned every one to his own way, and the Lord hath laid on him the iniquity of us all" (Isaiah 53:3-6).Jesus, the Redeemer, the Suffering Servant of God, died on the cross of Calvary and was buried. On the third day He rose from the dead and appeared to hundreds of eyewitnesses.By the resurrection, God clearly demonstrated that Jesus is the Messiah. If you have not received Jesus asyourMessiah, He invites you: "If thou shalt confess with thy mouth the Lord Jesus, and shalt believe in thine heart that God hath raised him from the dead, thou shalt be saved" (Romans 10:9).
-Publisher

John Alexander Coleman is John A. Garver Professor of Jurisprudence and Philosophy at Yale law School.

JOE CARTER(BA, Excelsior College) is the managing editor forCulture11, an online magazine. His personal blog, The Evangelical Outpost, was voted &#8220;Best Religious Blog&#8221; in the 2005 Weblog Awards and was named one of the &#8220;Best Spiritual Blogs&#8221; by Belief.net. Carter contributed to Crossway&#8217;sThe New Media Frontier.JOHN COLEMAN(Berry College) was named the nation&#8217;s top overall intercollegiate speech competitor in 2004. After working for two years at a top management consulting firm, Coleman is currently pursuing an MBA/MPA at the Harvard Business School and Harvard Kennedy School.

How to Argue Like Jesus
Joe Carter, John Coleman
eBook