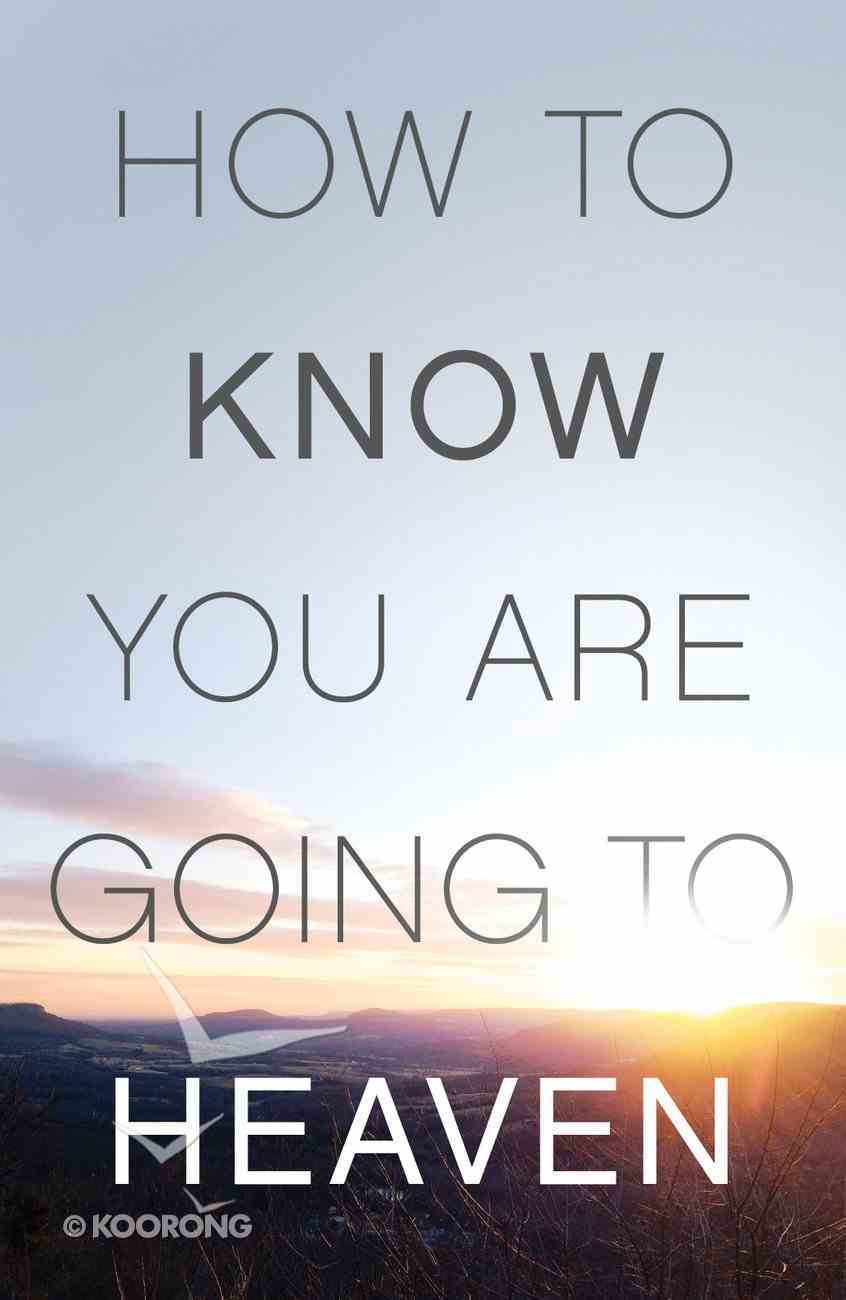 : A professor of philosophy in a university was lecturing on thelack of certainty in our age. "Certainty is impossible," he said. "We can know nothing for certain." A freshman raised her hand and asked "Professor, are you sure...

How Can We Know We'll Go to Heaven? (ESV) (Pack Of 25)
Randy Alcorn
Booklet

Are You Going to Heaven? (Pack Of 25)
Booklet

Heaven Or Hell: Which Will You Choose? (ESV) (25 Pack)
Booklet

Do Good People Go to Heaven? (Pack Of 25)
Booklet

:
A professor of philosophy in a university was lecturing on thelack of certainty in our age. "Certainty is impossible," he said. "We can know nothing for certain."


A freshman raised her hand and asked "Professor, are you sure of that?"


Yes, we live in an age of uncertainty. We're learning more and more about everything and yet we seem to know less and less for sure.


KNOW WHAT YOU KNOW


In contrast, the first followers of Jesus were characterized by their certainty. They didn't guess ... or hope ... or wish. They knew for certain. They were even willing to die for that certainty!


Unfortunately, most people don't have such confidence when it comes to eternal life. They hope, they wish, they would like to think, but they don't know for certain. As a result, they have no confidence in the face of death, which is tied to the certainty that we know we have eternal life. Yet, they often decide to put off thinking about death and dying until their "later years."


Some time ago I spoke at a meeting of a group of churches. After speaking one morning, I made my way outside for some fresh air. As I passed by the church kitchen I saw a giant of a man washing dishes. "Good morning! How are you today?" I said. He returned my greeting.


We shared some small talk. Then I said, "I'm in town conducting a spiritual workshop, and we're talking about eternal certainties. I'd like to ask you, 'When you die, do you know for certain that you will go to heaven?'"


He set his jaw and looked down for quite a while. When he lifted his face he said, "No, I don't know."


"Are you aware that it is possible to know that?" I asked.


I shared with him about God's grace and how he could know that he had eternal life. I explained that Christ had paid for all of our sins and that if we trust in him we can know that we are on our way to heaven. Then he and I bowed our heads to pray, and he placed his trust in Christ.


That reminds me of what a man named John Gerstner once said, "Christ has done everything necessary for [the sinner's] salvation. Nothing now stands between the sinner and God but... ."


But what? What is this roadblock that stands between so many people and their salvation by the gracious, forgiving God? That roadblock, he continued, is "the sinner's 'good works!'" Not their sins, but their good works, and their delusion that they do not need Christ and that their own good works can satisfy God.


It's exactly like the Bible-God's book to humankind -says: "The heart is deceitful above all things, and desperately sick; who can understand it?" (Jeremiah 17:9). Unfortunately, many people don't awaken to their error until it's forever too late. How many people in the first five minutes after death would give anything for simply one minute to get right with God?


Do you have certainty about eternity? Do you know for sure?


Throw away all trust in your own goodness. Look to the cross of Jesus Christ. See him who suffered the agony of the condemned in your place, who received from his own Father the penalty we deserve and then rose from the dead. Christ himself "bore our sins in his body on the tree [cross]" (1 Peter 2:24). Transfer all of your hopes from what you have done to what he has done for you at Calvary. Place your trust in him alone. "Whoever has the Son has life; whoever does not have the Son of God does not have life. I write these things to you who believe in the name of the Son of God that you might know that you have eternal life" (1 John 5:12-13).


Do you know that you have eternal life?


Lord Jesus Christ, I know I am a sinner and do not deserve eternal life. But, I believe you died and rose from the grave to purchase a place in heaven for me. Lord Jesus, come into my life; take control of my life; forgive my sins and save me. I repent of my sins and now place my trust in you for my salvation. I receive the free gift of eternal life.

The Number One Way to Fight the Devil
Norvel Hayes
Booklet