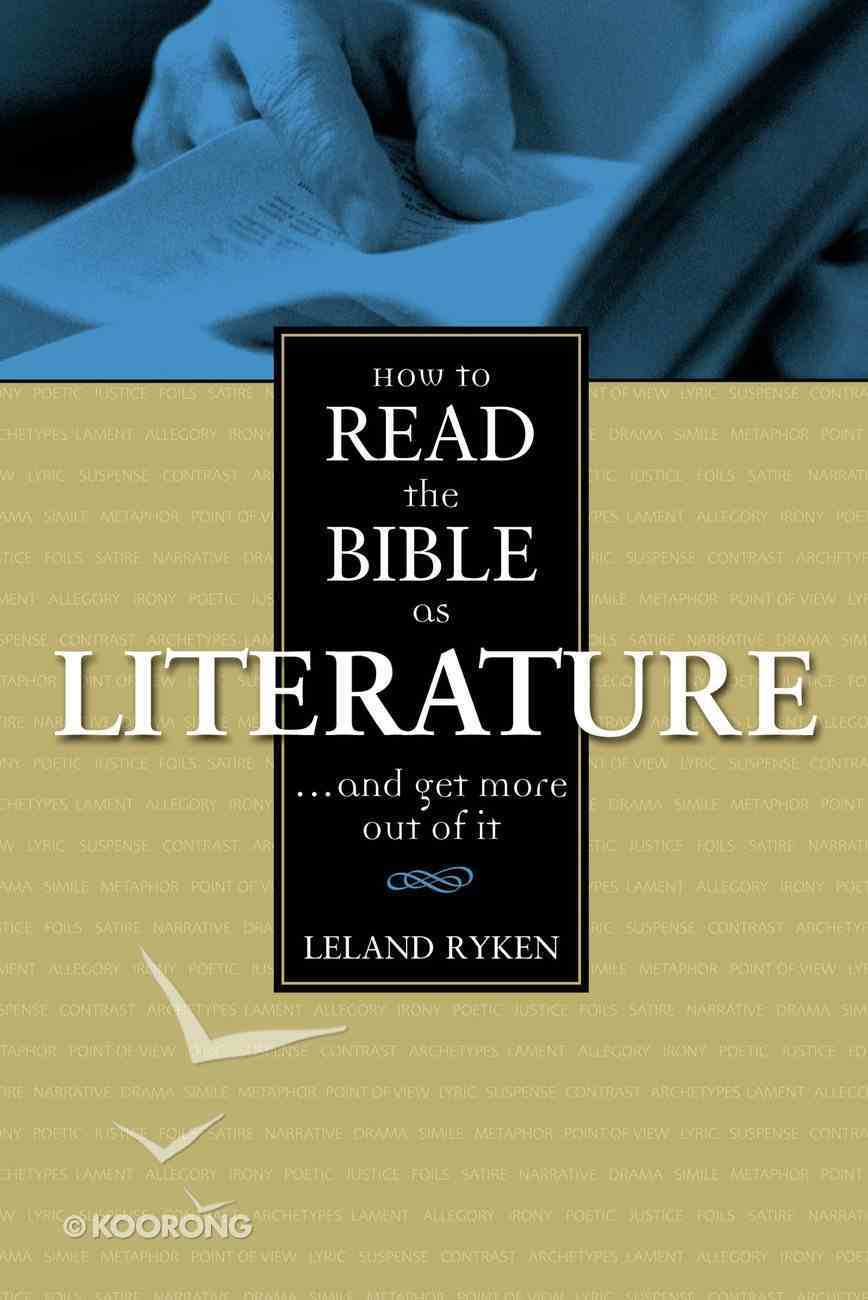 How to Read the Bible as Literature

Why the Good Book Is a Great ReadIf you want to rightly understand the Bible, you must begin by recognizing what it is: a composite of literary styles. It is meant to be read, not just interpreted. The Bible's truths...

How to Read the Bible as Literature
Leland Ryken
eBook

Interpreting the God-Breathed Word: How to Read and Study the Bible
Robbie F Castleman
Paperback

Why the Good Book Is a Great ReadIf you want to rightly understand the Bible, you must begin by recognizing what it is: a composite of literary styles. It is meant to be read, not just interpreted. The Bible's truths are embedded like jewels in the rich strata of story and poetry, metaphor and proverb, parable and letter, satire and symbolism. Paying attention to the literary form of a passage will help you understand the meaning and truth of that passage.How to Read the Bible as Literature takes you through the various literary forms used by the biblical authors. This book will help you read the Bible with renewed appreciation and excitement and gain a more profound grasp of its truths.Designed for maximum clarity and usefulness, How to Read the Bible as Literature includes * sidebar captions to enhance organization* wide margins ideal for note taking* suggestions for further reading* appendix: "The Allegorical Nature of the Parables"* indexes of persons and subjects
-Publisher

Leland Ryken (Ph.D., University of Oregon) is Clyde S. Kilby Professor of English at Wheaton College in Wheaton, Illinois. He is the author of more than one hundred published articles and essays, and he has written, edited or contributed to (so far) twenty-five books, including The Word of God in English: Criteria for Excellence in Bible Translation (Crossway), The Christian Imagination: The Practice of Faith in Literature and Writing (Shaw), Dictionary of Biblical Imagery (InterVarsity Press), The Discerning Reader: Christian Perspectives on Literature and Theory (Baker) and A Complete Literary Guide to the Bible (Zondervan).
His most recent books have been on C.S.Lewis' works A Reader's Guide Through the Wardrobe and A Reader's Guide to Caspian: A Journey into C. S. Lewis's Narnia and Understanding English Bible Translation: The Case for an Essentially Literal Approach. He is a frequent speaker at the Evangelical Theological Society and served as literary stylist for The Holy Bible, English Standard Version.
Koorong -Editorial Review.

Chapter One Is the Bible Literature? New Directions in Biblical Studies THERE IS A QUIET REVOLUTION GOING ON in the study of the Bible. At its center is a growing awareness that the Bible is a work of literature and that the methods of literary scholarship are a necessary part of any complete study of the Bible. There are two sides to the movement: literary scholars are showing increasing interest in applying their methods to the Bible, and Bible scholars are calling for a literary approach. A number of ingredients make up this new approach to the Bible: a concern with the literary genres of the Bible; a new willingness to treat biblical texts as finished wholes instead of as a patchwork of fragments; a focus on the Bible as it now stands instead of conducting excavations in the redaction (editing) process behind the text; an inclination to use literary instead of traditional theological terms to discuss the stories and poems of the Bible; an appreciation for the artistry of the Bible; a sensitivity to the experiential, extra-intellectual (more-than-ideational) dimension of the Bible. But above all, the new attitude toward the Bible involves a growing awareness that literature expresses truth in its own way, different from ordinary propositional discourse. In other words, when the Bible employs a literary method, it asks to be approached as literature and not as something else. In the words of C. S. Lewis, 'There is a ... sense in which the Bible, since it is after all literature, cannot properly be read except as literature; and the different parts of it as the different sorts of literature they are.' Defining the Term 'Literature' The purpose of this opening chapter is to identify what makes a text 'literature.' I should say at once that by the term 'literature' I do not mean everything that is written. I use it in a more restricted sense to mean the types of writing that are often called 'imaginative literature' or 'creative writing,' in contrast to expository writing. In this chapter, I am in effect defining those parts of the Bible that are like the works covered in high school and college literature courses. By thus defining literature I am not establishing an 'either--or' method of distinguishing between literary and nonliterary texts. The Bible is obviously a mixed book. Literary and nonliterary (expository, explanatory) writing exist side by side within the covers of this unique book. I have no intention of building a 'great divide' that would make a biblical passage either literature or nonliterature. Instead, I am describing a continuum, or scale, on which some parts of the Bible are more literary and other parts are less literary. Nor do I wish to suggest that the literary parts of the Bible cannot be approached in other ways as well. I do not question that the literary parts can and should also be approached as history and theology. My claim is simply that the literary approach is one necessary way to read and interpret the Bible, an approach that has been unjustifiably neglected. Despite that neglect, the literary approach builds at every turn on what biblical scholars have done to recover the original, intended meaning of the biblical text. In fact, the literary approach that I describe in this book is a logical extension of what is commonly known as the grammatico-historical method of biblical interpretation. Both approaches insist that we must begin with the literal meaning of the words of the Bible as determined by the historical setting in which the authors wrote. The Parable of the Good Samaritan The best way into the subject is to look at a couple of examples. One of the most memorable passages in the whole Bible is the parable Jesus told when a lawyer asked him to define who his neighbor was. Here is the definition of 'neighbor' that Jesus gave (Luke 10:30--36): A man was going down from Jerusalem to Jericho, when he fell into the hands of robbers. They stripped him of his clothes, beat him and went away, leaving him half dead. A priest happened to be going down the same road, and when he saw the man, he passed by on the other side. So too, a Levite, when he came to the place and saw him, passed by on the other side. But a Samaritan, as he traveled, came where the man was; and when he saw him, he took pity on him. He went to him and bandaged his wounds, pouring on oil and wine. Then he put the man on his own donkey, took him to an inn and took care of him. The next day he took out two silver coins and gave them to the innkeeper. 'Look after him,' he said, 'and when I return, I will reimburse you for any extra expense you may have.' Which of these three do you think was a neighbor to the man who fell into the hands of robbers? Everything about this passage makes it a piece of literature. We should notice first that Jesus never gives an abstract or propositional definition of 'neighbor.' Instead, he tells a story that embodies what it means to be a neighbor. This suggests at once the most important thing about literature: its subject matter is human experience, not abstract ideas. Literature incarnates its meanings as concretely as possible. The knowledge that literature gives of a subject is the kind of knowledge that is obtained by (vicariously) living through an experience. Jesus could have defined neighbor abstractly, as a dictionary does, but he chose a literary approach to the truth instead. This is comparable to an experience we probably have all had when struggling with the assembly of a toy or appliance: when we have a good picture, we may not even need the written instructions.