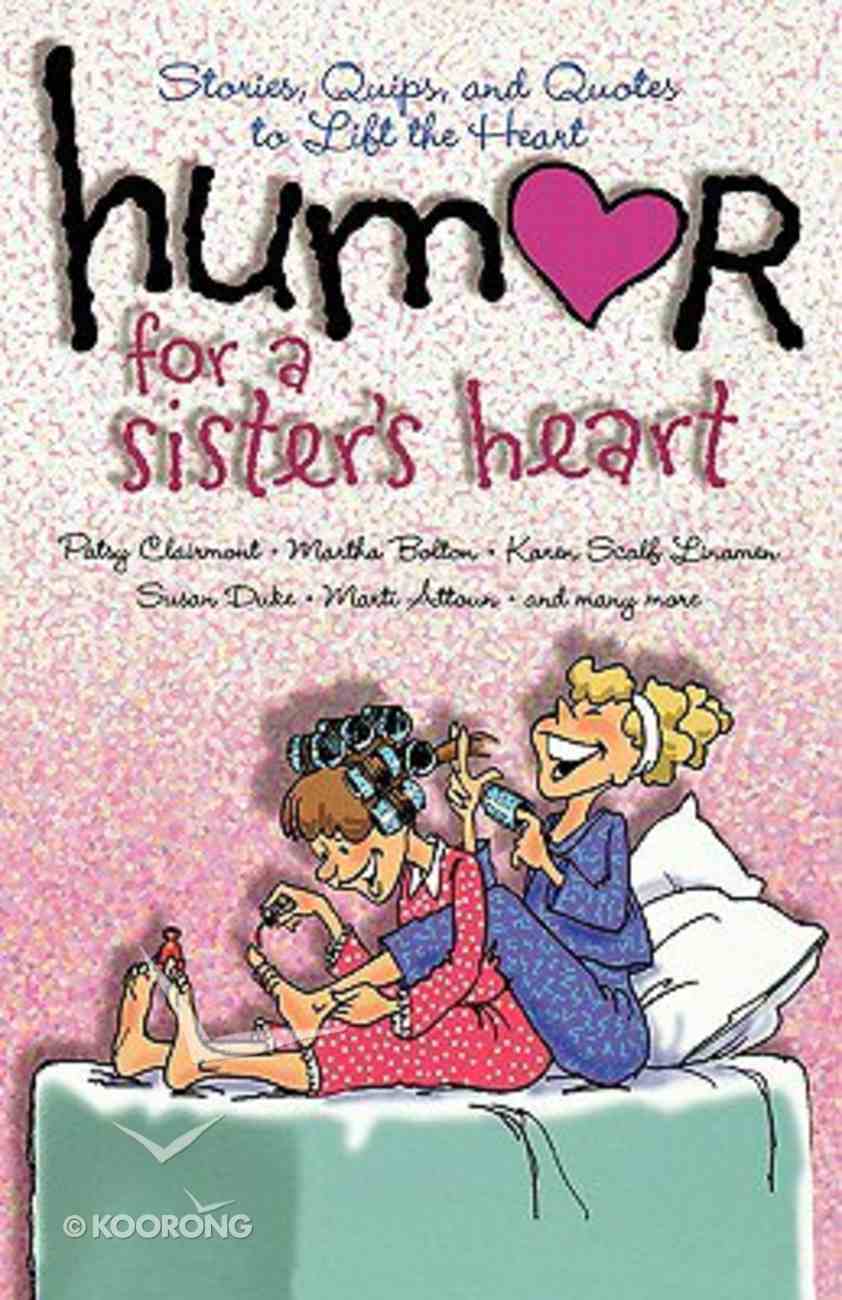 Humor For a Sister's Heart

HUMOUR FOR. . . SERIES Here is a great gift idea for special people in your life! Full of stories, quips, and uplifting quotes, these hilarious books remind readers of the lighter side of life, making daily pressures a...

Mdf Ceramic Small Frame Collage: I Love That You're My Sister (2 Cor 7:4)
Homeware

Ceramic Mug: I Have Loved You With An Everlasting Love, White/Pink Heart/Gold Foiled (Jer 31:13) (414ml)
Homeware

Humor For the Heart
Paperback

Humor For a Mom's Heart
Paperback

Here is a great gift idea for special people in your life! Full of stories, quips, and uplifting quotes, these hilarious books remind readers of the lighter side of life, making daily pressures a little easier to face through the blessing of laughter.

Celebrate the Bond of Sisterhood When it comes to sisters, there's plenty to laugh about -- and this joyful book is filled with humorous stories about the special relationship that sisters share. Sisters share secrets, sorrows, success, and sometimes silliness. It's this sense of sharing that brings sisters so close -- and in that closeness, there are all kinds of reasons to laugh. You'll giggle and grin as you read stories from some of your favorite authors and comedians -- like Patsy Clairmont, Martha Bolton, Karen Scalf Linamen -- and new friends you'll delight in getting to know. Whether sisters by family, faith, or friendship, you'll find yourself -- and your sister -- reflected in stories of childhood antics, shopping trips, midnight heart-to-heart talks, and the many shared "oops " of life. Whether for yourself or your sister, this cheerful infusion of humor will bring joy to a day that's dreary and giggles to one that's already glorious.
-Publisher

Chapter One Sisters Are There for You in a Pinch Make My Day, Doughboy!by Karen Scalf Laramer For some unknown reason, I was awake at 3 a.m. when my sister Michelle tiptoedpast my bedroom door. I said, "Hey." "Hey back." She poked her head in my room. "I'm glad you're awake. I heard anoise in the basement." Ten months earlier, my two kids and I moved into a big old house in the woodsand invited my sister and five-year-old niece to move in with us. No husbands orsons, just two single moms, our three daughters, and enough clothes tofashionably outfit a third-world country. Now the dark basement of that big oldhouse was making weird noises in the middle of the night. I threw on a robe and we tiptoed down the stairs, through the main hall, aroundthe corner, and peered down the basement stairwell. I whispered, "What did you hear?" "I heard scratching. It was so loud I thought it was you." I frowned. "Just how loud do I scratch?" "I think we need a weapon." "Curling iron? Stilletos? Cheez Whiz?" Michelle smacked palm to forehead. "Gun!" Michelle's former husband, Russ, had been a police officer. Of course therewould be a gun. I followed her into the office and watched as she tried toremember the combination to the fire safe. Eventually she gave up, rocked backon her heels, and looked at me. At the exact same moment we both said, "Rollingpins!" It's amazing we even own rolling pins. After all, we are a household run by twosingle moms. We don't have husbands to keep in line, and we don't have time tobake from scratch. Nevertheless, five minutes later we were armed and dangerous. Michelle said it well. Brandishing her rolling pin she shouted, "Hey, whoeveryou are -- we're armed and dangerous!" I sighed. "The Pillsbury Doughboy is quaking in his boots. Look, maybe we shouldcall the police. Sure, we could go down together into the dark basement,clutching each other, flashlight in one hand and rolling pin in the other, but,frankly, I've seen those movies and it never ends well." She saw my point. We called 911, and ten minutes later we spotted flashlightbeams darting around the house. When we answered a rap at the door, three officers filled the hallway. Michelle btold them what she'd heard, and theydisappeared into the bowels of the house. We waited. I sat cross-legged on the floor of the hall in my terry-cloth robe. Michelle saton the bottom step of the stairs leading to the bedrooms where our daughtersslept soundly. There were three men in our basement. Four if you counted theintruder. Or maybe three men and a squirrel. Michelle was still holding therolling pin and wearing fuzzy slippers. Now that we no longer needed to protectour children with a baking implement, this suddenly seemed like an awfullyexciting thing to be doing at 3:42 a.m. Adrenaline high and danger on the wane,we began to giggle. I admitted, "I called the police once like this when I wasliving in California. I kept hearing noises on the porch. The cop searched theoutside of the house for ten minutes, then rang the bell to give me the news.Turns out I'd put a bag of trash on the front porch and some animal had beendigging through it. Boy, did I feel stupid." Michelle laughed. "When Russ was a rookie cop, he was doing a patrol check on avacant house that was under construction, when he really had to pee. Theplumbing was working, but none of the rooms had doors yet. As he's standingthere taking care of business, it dawns on him that someone could sneak upbehind him, so he draws his gun. Sure enough, he hears something behind him andwhips around, a gun in one hand and, well...let's just say he had both handsfull. I guarantee that electrician will think twice before showing up
-Publisher