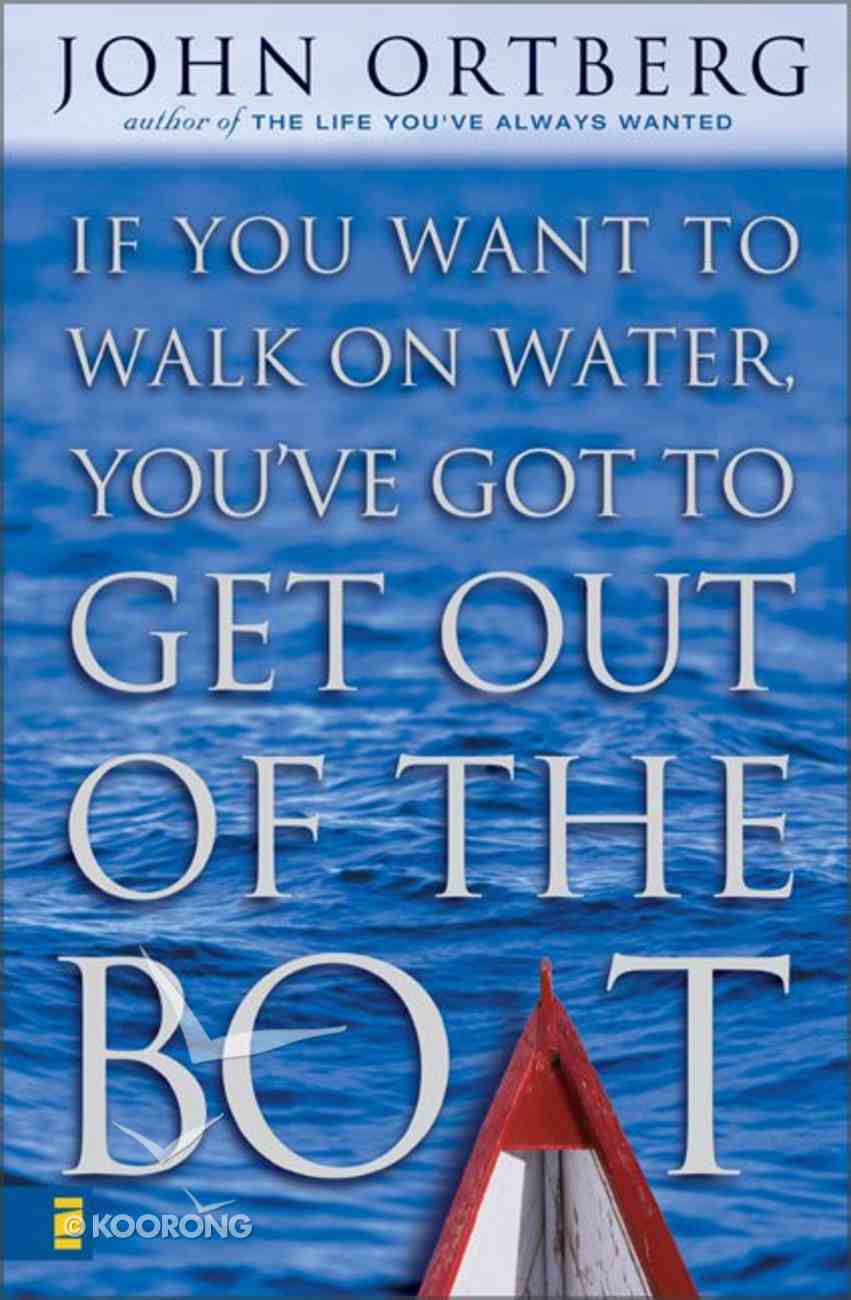 If You Want to Walk on Water, You've Got to Get Out of the Boat

Winner of the 2002 Christianity Today Book Award!;You're One Step Away from the Adventure of Your Life Deep within you lies the same faith and longing that sent Peter walking across the wind-swept Sea of Galilee toward Jesus.;In what ways...

If You Want to Walk on Water, You've Got to Get Out of the Boat
John Ortberg
Paperback

If You Want to Walk on Water, You've Got to Get Out of the Boat: A DVD Study
John Ortberg, Stephen Sorenson, Amanda Sorenson
DVD

If You Want to Walk on Water, You've Got to Get Out of the Boat (Participant's Guide With Dvd)
John Ortberg, Stephen Sorenson, Amanda Sorenson
Pack

If You Want to Walk on Water, You've Got to Get Out of the Boat Leader's Guide (Spa) (Spanish)
John Ortberg
eBook

If You Want to Walk on Water, You've Got to Get Out of the Boat (Participant's Guide)
John Ortberg, Stephen Sorenson, Amanda Sorenson
eBook

If You Want to Walk on Water, You've Got to Get Out of the Boat (Participant's Guide)
John Ortberg, Stephen Sorenson, Amanda Sorenson
Paperback

If You Want to Walk on Water, You've Got to Get Out of the Boat (Unabridged Mp3)
John Ortberg
CD

Winner of the 2002 Christianity Today Book Award!;You're One Step Away from the Adventure of Your Life Deep within you lies the same faith and longing that sent Peter walking across the wind-swept Sea of Galilee toward Jesus.;In what ways is the Lord telling you, as he did Peter, Come?;John Ortberg invites you to consider the incredible potential that awaits you outside your comfort zone. Out on the risky waters of faith, Jesus is waiting to meet you in ways that will change you forever, deepening your character and your trust in God. The experience is terrifying. It's thrilling beyond belief. It's everything you'd expect of someone worthy to be called Lord.;The choice is yours to know him as only a water-walker can, aligning yourself with God's purpose for your life in the process. There's just one requirement* If You Want to Walk on Water, You've Got to Get Out of the Boat.
-Publisher

Out on the risky waters of faith, Jesus is waiting to meet you and offer you his Holy Spirit power that will change your life forever, deepening your faith and trust in God. Read by John Ortberg.
-Publisher

If You Want to Walk on Water, You've Got to Get Out of the Boat Leader's Guide
John Ortberg, Stephen Sorenson, Amanda Sorenson
Paperback

If You Want to Walk on Water, You've Got to Get Out of the Boat Leader's Guide (Spa) (Spanish)
John Ortberg
eBook

On Water-Walking Some years ago my wife arranged for us to ride in a hot-air balloon as a birthday gift. We went to the field where the balloons ascended and got into a little basket with one other couple. We introduced ourselves and swapped vocational information. Then our pilot began the ascent. The day had just dawned---clear, crisp, cloudless. We could see the entire Canejo Valley, from craggy canyons to the Pacific Ocean. It was scenic, inspiring, and majestic. But I also experienced one emotion I had not anticipated. Want to guess? Fear. I had always thought those baskets went about chest high, but this one only came up to our knees. One good lurch would be enough to throw someone over the side. So I held on with grim determination and white knuckles. I looked over at my wife, who does not care for heights at all, and relaxed a bit, knowing there was someone in the basket more tense than I was. I could tell, because she would not move---at all. During part of our flight there was a horse ranch on the ground directly behind her. I pointed it out because she loves horses, and, without turning around or even pivoting her head, she simply rolled her eyes back as far as she could and said, 'Yes, it's beautiful.' About this time I decided I'd like to get to know the kid who was flying this balloon. I realized that I could try to psyche myself up into believing everything would be fine, but the truth was we had placed our lives and destinies in the hands of the pilot. Everything depended on his character and competence. I asked him what he did for a living and how he got started flying hot-air balloons. I was hoping for his former job to be one full of responsibilities---a neurosurgeon, perhaps, an astronaut who missed going up into space. I knew we were in trouble when his response to me began, 'Dude, it's like this...' He did not even have a job! He mostly surfed. He said the reason he got started flying hot-air balloons was that he had been driving around in his pickup when he'd had too much to drink, crashed the truck, and badly injured his brother. His brother still couldn't get around too well, so watching hot-air balloons gave him something to do. 'By the way,' he added,'if things get a little choppy on the way down, don't be surprised. I've never flown this particular balloon before, and I'm not sure how it's going to handle the descent.' My wife looked over at me and said, 'You mean to tell me we are a thousand feet up in the air with an unemployed surfer who started flying hot-air balloons because he got drunk, crashed a pickup, injured his brother, and has never been in this one before and doesn't know how to bring it down?' Then the wife of the other couple looked at me and spoke---the only words either of them were to utter throughout the entire flight. You're a pastor. Do something religious. So I took an offering. The great question at a moment like that is, Can I trust the pilot? I could try telling myself that everything would turn out okay. Facing the flight with a positive attitude would certainly make it a more pleasant journey. But the journey would be over soon. And the real issue concerned the dude who was flying this thing. Were his character and competence such that I could confidently place my destiny in his hands? Or, was it time to do something religious? Every day you and I take another leg of our journey in this giant balloon that's whirling around a vast universe. We only get one trip. I long to take it with an enormous spirit of adventure and risk---and I'll bet you do, too. But it's a pretty uncertain ride sometimes. I wish the walls to my basket went up a little higher. I wish the balloon was a little thicker. I wonder how my little ride will end up. I'm not sure how it will handle on the way down. I can try to psyche myself up for taking chances and believing everything will turn out okay. But the real question is, Is there somebody piloting this thing? And are his character and competence such that he can be trusted? Because if they're not, I don't want to take a chance. My story, like every human story, is, at least in part, the struggle between faith and fear. Because of this, I have found myself drawn for many years to the story of Peter getting out of the boat and walking on the water with Christ. It is one of the greatest pictures of extreme discipleship in Scripture. In the following chapters we will take a close look at each detail of this story for what it teaches us about water-walking. But for the rest of this chapter, let's get an aerial overview. What goes into the making of a water-walker?