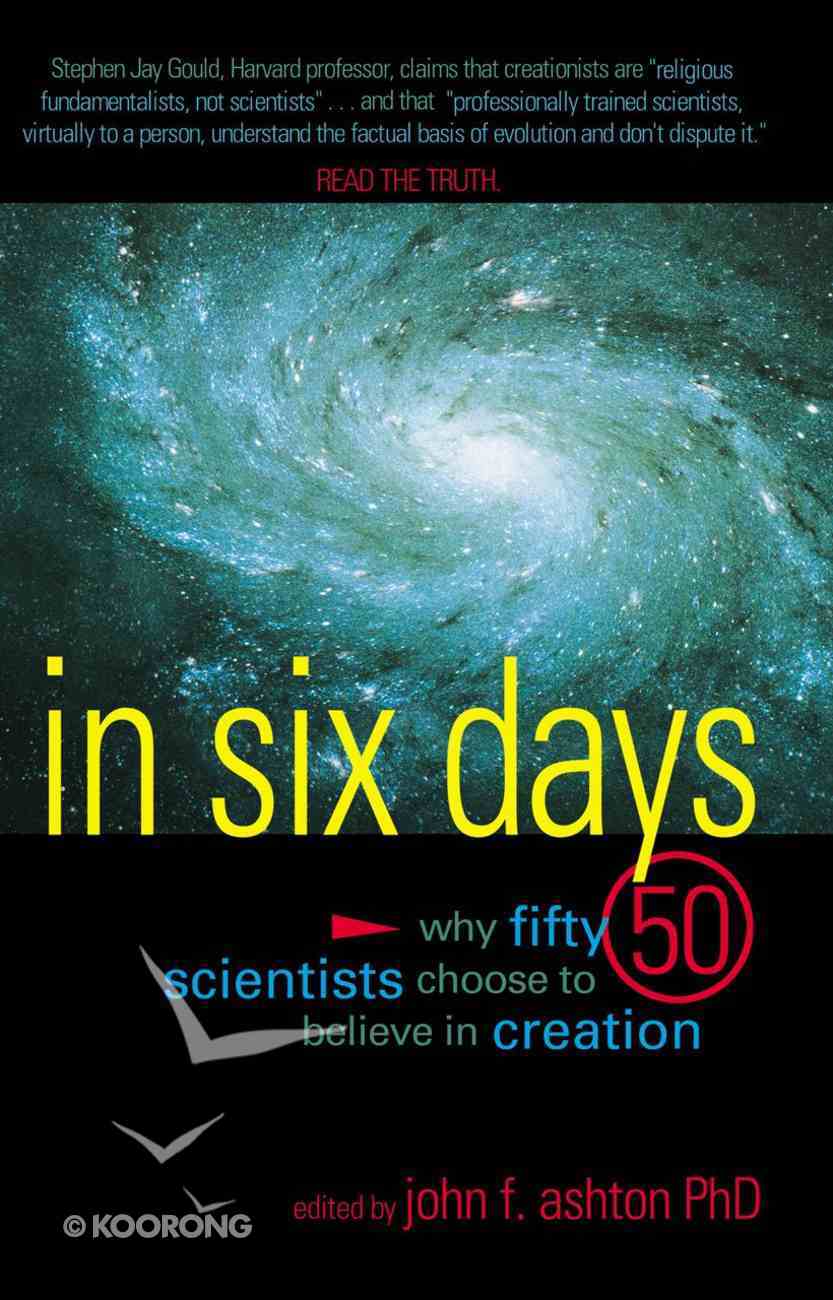 In Six Days: Why 50 Scientists Choose to Believe in Creation

Examining the evidence for evolution, fifty physicists, biologists and chemists present a straightforward and wide-ranging defense of creation. Important questions about the Big Bang Theory, radioactive dating of rocks, light from distant stars, and fossils are discussed in detail. This...

Six Days: The Age of the Earth and the Decline of the Church
Ken Ham
Paperback

Examining the evidence for evolution, fifty physicists, biologists and chemists present a straightforward and wide-ranging defense of creation. Important questions about the Big Bang Theory, radioactive dating of rocks, light from distant stars, and fossils are discussed in detail. This fascinating and highly readable book opens the evolution versus creation debate to a wider public. It is a must-read for all thinking Christians.

Why would any educated scientist with a PhD advocate a literal interpretation of the six days of creation? Why, indeed, when only one in three Americans believes "the Bible is the actual word of God and is to be taken literally, word for word" according to a recent Gallup poll.


Science can neither prove nor disprove evolution any more than it can creation. Certainly there are no human eyewitness accounts of either. However, certain factors are present today which are capable of swaying one's beliefs one way or the other.


In this book are the testimonies of fifty men and women holding doctorates in a wide range of scientific fields who have been convicted by the evidence to believe in a literal six-day creation. For example, meet:

The geneticist who concludes that there must have been 150 billion forerunners of "modern man" in order for the natural selection required by evolution to have taken place in the development of man. The evidence for such vast numbers of "prehistoric man" is in dire shortage. The orthodontist who discovered that European museum fossils of ancient man have been tampered with to adhere to evolution theories. The geologist who studied under the late Stephen Jay Gould and literally cut the Bible to pieces before totally rejecting evolution.
All fifty of these scientists, through faith and scientific fact, have come to the conclusion that God's Word is true and everything had its origin not so very long ago, in the beginning, In Six Days.