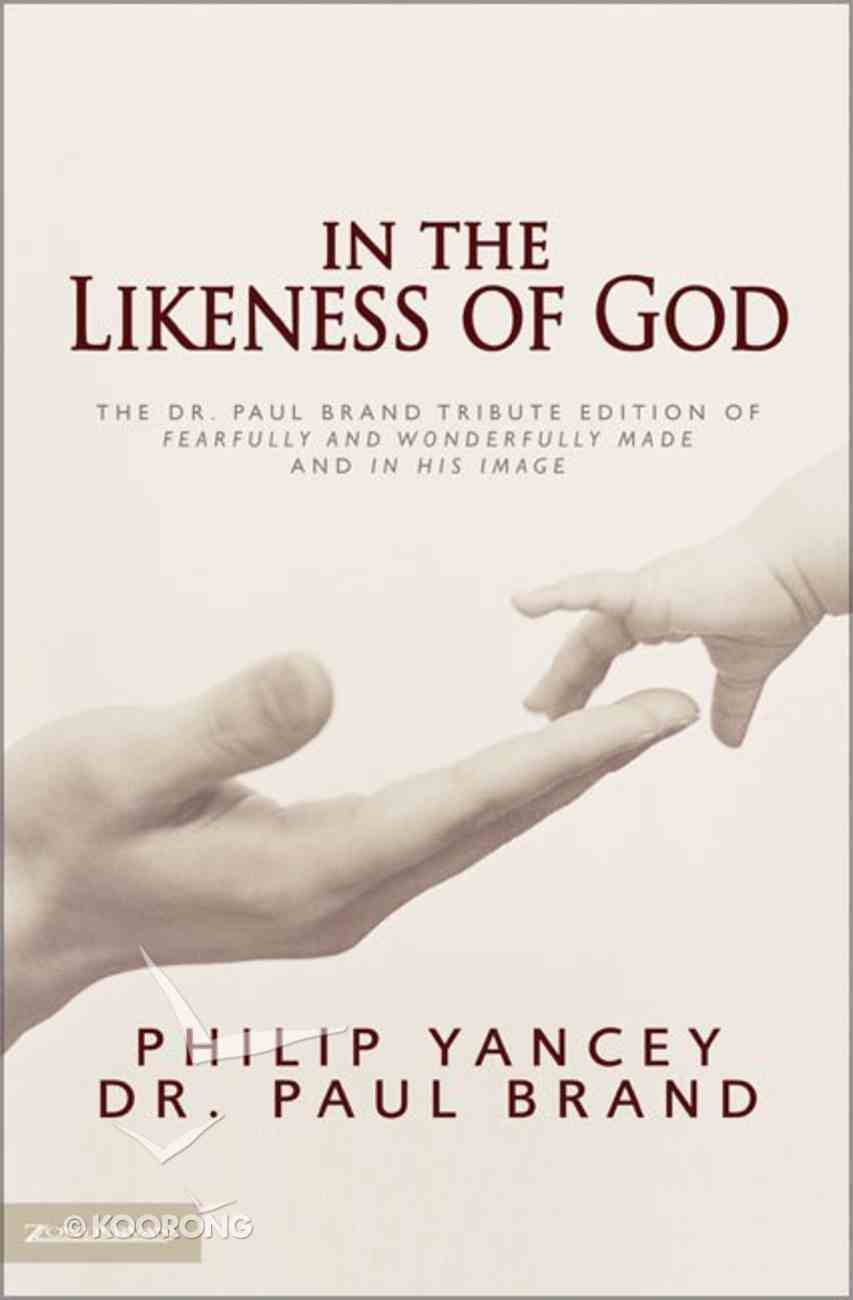 In the Likeness of God

The human body is a likeness of God, its design revealing insights into the church, the "body of Christ" For bestselling author Philip Yancey, the late Dr. Paul Brand--the brilliant hand surgeon who devoted his life to the poorest people...

In the Likeness of God
Philip Yancey, Paul Brand
eBook

In His Image
Paul Brand
eAudio

Where is God When It Hurts?
Philip Yancey
Paperback

The human body is a likeness of God, its design revealing insights into the church, the "body of Christ" For bestselling author Philip Yancey, the late Dr. Paul Brand--the brilliant hand surgeon who devoted his life to the poorest people of India and Louisiana--was also a likeness of God, living the kind of Christian life that exemplified what God must have had in mind. In the Likeness of God combines the complete texts of Fearfully and Wonderfully Made and In His Image--both Gold Medallion Award-winners which together have sold more than half a million copies--into one volume. Also included for the first time are eight beautiful litanies of praise on the human body by Dr. Brand. In Fearfully and Wonderfully Made, Dr. Paul Brand and bestselling writer Philip Yancey explore the wonder of the human body and uncover the eternal statements that God has made in the very structure of our bodies. Their remarkable journey through inner space--the world of cells, systems, and chemistry--points
-Publisher

In the Likeness of God Copyright 2004 by Philip Yancey Fearfully and Wonderfully Made Copyright 1980 by Paul Brand and Philip Yancey In His Image Copyright 1984 by Paul Brand and Philip Yancey Requests for information should be addressed to: Zondervan, Grand Rapids, Michigan 49530 Library of Congress Cataloging-in-Publication Data Yancey, Philip. In the likeness of God : the Dr. Paul Brand tribute edition of Fearully and wonderfully made and In His image / Philip Yancey and Paul Brand. p. cm. Previous editions entered under Brand, Paul W. Rev. ed. of the authors Fearfully and wonderfully made. 1980, and In His image. 1984. Includes bibliographical references and index. ISBN 0-310-25742-5 1. Church. 2. Body, Human-Religious aspects-Christianity. I. Brand, Paul W. II. Brand, Paul W. Fearfully and wonderfully made. III. Brand, Paul W. In His image. IV. Title. BV600.5.Y36 2004 233'.5-dc22 2004005670 This edition printed on acid-free paper. Scripture quotations are taken from the Holy Bible: New International Version. NIV. Copyright 1973, 1978, 1984 by International Bible Society. Used by permission of Zondervan. All rights reserved. The King James Version. The New American Standard Bible, Copyright 1960, 1962, 1963, 1968, 1971, 1972, 1973, 1975, 1977 by the Lockman Foundation. Used by permission. All rights reserved. No part of this publication may be reproduced, stored in a retrieval system, or transmitted in any form or by any means-electronic, mechanical, photocopy, recording, or any other-except for brief quotations in printed reviews, without the prior permission of the publisher. Interior design by Michelle Espinoza Printed in the United States of America 04 05 06 07 08 09 10 /.DC/ 10 9 8 7 6 5 4 3 2 1 We want to hear from you. Please send your comments about this book to us in care of zreview@zondervan.com. Thank you. MEMBERS I have been trying to think of the earth as a kind of organism, but it is no go. I cannot think of it this way. . . . The other night, driving through a hilly, wooded part of southern New England, I wondered about this. If not like an organism, what is it like, what is it most like? Then, satisfactorily for that moment, it came to me: it is most like a single cell. Lewis Thomas I remember the first time I saw a living cell under a microscope. I was twenty-one years old and taking a short course in tropical hygiene at Livingstone College in England. We had been studying parasites, but our specimens were dead; I wanted to see a living amoeba. Early one morning, before the laboratory was cluttered with students, I sneaked into the old science building. The imposing red brick structure stood next to a pond from which I had just scooped some water in a teacup. Bits of decomposing leaves floated in the turbid water, smelling of decay and death. But when I touched one drop of that water to a microscope slide, a universe sprang to life. Hundreds of organisms crowded into view: delicate, single-celled globes of crystal, breathing, unfurling, flitting sideways, excited by the warmth of my microscope light. I edged the slide a bit, glancing past the faster organisms. Ah, there it was. An amoeba. A mere chip of translucent blue, it was barely visible to my naked eye, but the microscope revealed even its inner workings. Something about the amoeba murmurs that it is one of the most basic and primordial of all creatures. Somehow it has enlisted the everyday forces of millions of spinning atoms so that they now serve life, which differs profoundly from mere matter. Just an oozing bit of gel, the amoeba performs all the basic functions that my body does. It breathes, digests, excretes, reproduces. In its own peculiar way it even moves, plumping a hummock of itself forward and following with a motion as effortless as a drop of oil spreading on a table. After one or two hours of such activity, the grainy, watery blob will have traveled a
-Publisher

Dr. Paul Brand, son to missionary parents, was a world-renowned hand surgeon and pioneer in developing tendon transfer techniques for use in the hands of those with leprosy. He trained in medicine at the University College Hospital in London and and later gained his surgical qualifications whilst working as a casualty surgeon in the London Blitz. After visiting a Leprosy Sanatorium at Chingleput, he was motivated to explore the reasons behind the deformities of this disease. A donation from a missionary woman helped him establish the New Life Rehabilitative Center, which helped dispel the stig