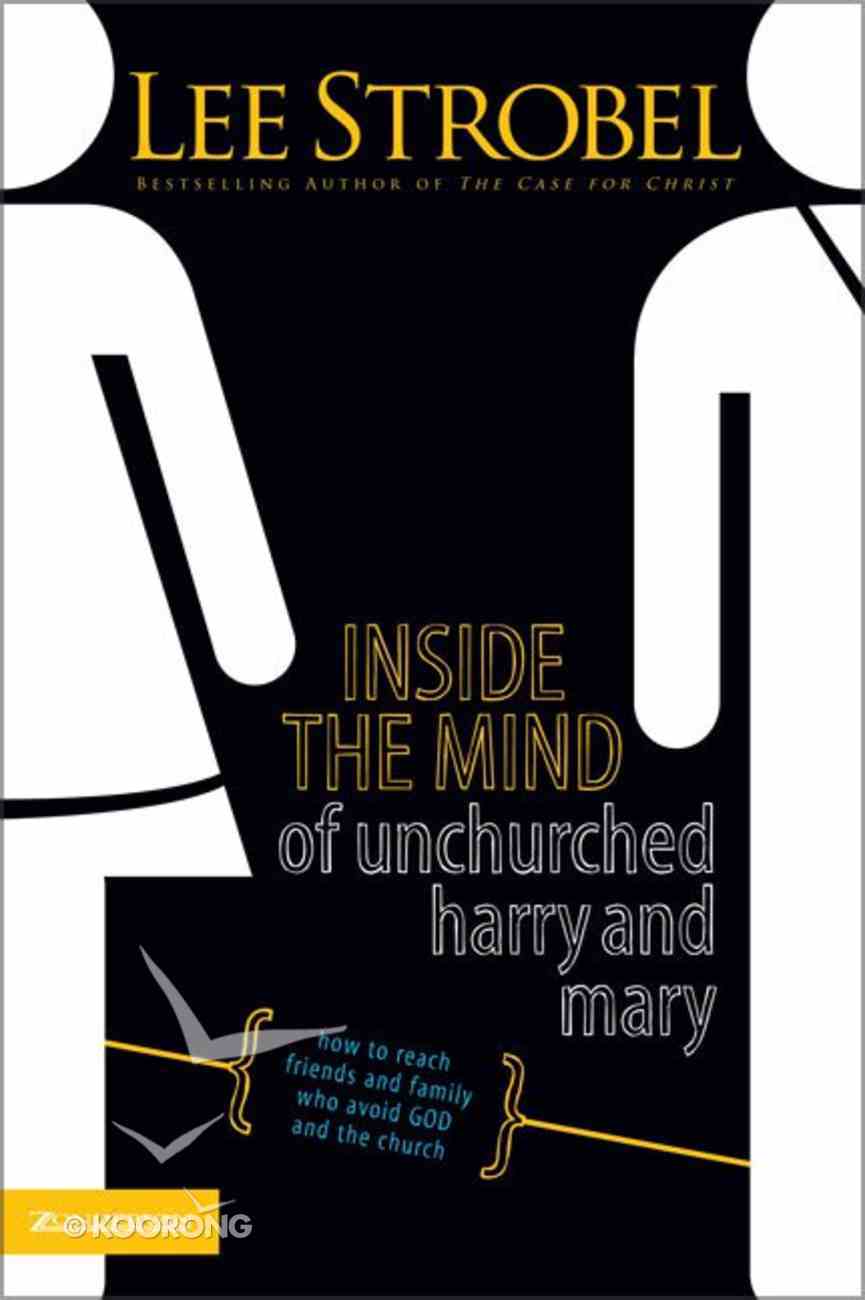 Inside the Mind of Unchurched Harry and Mary

To reach friends with the gospel, we need to understand why they hold God and the church at arm's length. Through firsthand experiences, compelling anecdotes, biblical illustrations, and the latest research, this book will help you better understand those outside...

To reach friends with the gospel, we need to understand why they hold God and the church at arm's length. Through firsthand experiences, compelling anecdotes, biblical illustrations, and the latest research, this book will help you better understand those outside the church. Its practical approach - mixed with humour - will help you as an individual believer and your church to effectively reach your community. 224 pages, from Zondervan

Who Are Unchurched Harry and Mary?He or she could be the neighbor who is perfectly happy without God.Or the coworker who scoffs at Christianity.Or the supervisor who uses Jesus' name only as profanity.Or the family member who can't understand why religion is so important.Inside the Mind of Unchurched Harry and Mary isn't a book of theory. It's an action plan to help you relate the message of Christ to the people you work around, live with, and call your friends.Using personal experiences, humor, compelling stories, biblical illustrations, and the latest research, Lee Strobel helps you understand non-Christians and what motivates them. The book includes: * 15 key insights into why people steer clear of God and the church* A look at Christianity and its message through the eyes of a former atheist* Practical, inspirational strategies for building relationships with non-Christians* Firsthand advice on surviving marriage to an unbelieving spouse
-Publisher

Inside the Mind of Unchurched Harry and Mary isn't a book of theory. It's an action plan to help Christians relate the message of Christ to the people they work around, live with, and call their friends. Using personal experiences, humor, compelling stories, biblical illustrations, and the latest research, Lee Strobel helps Christians understand unbelievers and what motivates them.
-Publisher

Chapter 2 Harry's Journey Begins 'Unchurched Harry' Sure, I've been kidded that I was Unchurched Harry, but actually that's too mild a nickname to describe my attitude back then. It sounds like someone who's stuck in spiritual neutral. A more appropriate description of my mindset would have been 'Anti-Church Charlie' because I was so negative toward spiritual matters. For most of my adult life, I considered myself an atheist. Admittedly, I hadn't analyzed the evidence for and against the existence of God before I concluded that He didn't exist. I merely thought the concept of an almighty deity was absurd on its surface. Why devote time to checking out such obvious wishful thinking? Angels and demons---come on! It did not take much of a dose of modern science to debunk the Sunday school mythology of my childhood. Even as a youngster, I was the skeptical sort. When I'd go into an ice-cream shop, I'd count all the flavors just to make sure there were thirty-one like the sign said. I was the kind of high school student who peppered teachers with remarks like, 'Prove it to me,' and 'How do you know?' So I suppose it was natural for me to pursue journalism as a career. It seemed like the perfect profession for an iconoclast who liked to write. From an early age, I was fascinated by newspapers. I loved to read The Chicago Tribune before breakfast and The Chicago Daily News after dinner because they were aggressive and tough-minded. They seemed to subscribe to the old axiom that newspapers exist to comfort the afflicted and afflict the comfortable. I wanted that to be my motto, too. When I was eleven years old, I started a neighborhood newspaper called The Arlington Bulletin in my hometown of Arlington Heights, Illinois, a suburb northwest of Chicago. With the help of some buddies, I produced the five-page Bulletin on a decrepit mimeograph machine every week for two years, publishing everything from local crime stories and politics to reports on new residents of the area. At one point, Stanton Cook, then production manager of The Chicago Tribune, got wind of our paper, and he came over to see my 'newsroom' in our basement. When a Tribune reporter later interviewed me for an article, I was able to articulate a firm vision of my future: I wanted to get my degree from the University of Missouri's journalism school and then embark on a career in Chicago, one of the country's most tumultuous newspaper towns. Graduating from church I wasn't concerned much about spiritual issues as a child. My parents certainly encouraged me to believe in God, and they brought me and my four brothers and sisters to a Lutheran church on a regular basis. Frankly, I hated it, and so periodically I'd fake a sore throat and say that I was too sick to go. Of course, my mom would reply, 'If you're too sick for church, then you're too sick to go outside and play this afternoon.' That usually cured me. What I recall most from Sunday school is the mind-numbing boredom of it all. I vaguely remember a jumble of stories about men who wore robes and rode camels, people I just couldn't relate to. It was worse when I'd go to the adult service; the twenty-minute sermons seemed interminable, and the whole time I was supposed to sit still and be quiet. I don't remember much of the content other than some talk about Jesus' dying on the cross and paying for our sins, but I never could quite comprehend the connection between the two. All the kids in our family were expected to go through the church's confirmation process. That meant going to church for religious training for a few hours each week during parts of seventh and eighth grades. We would sit in a strict classroom while the pastor tried to stuff theology into our uncooperative heads. Each week the class was assigned a chunk of the catechism to memorize, such as one of the Ten Commandments and the commentary on it. Of course, I never studied the assignment until I was walking to church the next week and so I would sit in the back row with sweaty palms until I'd have to stand and fumble my way through the recital. The pastor seemed exasperated by the attitude of much of the class. And, to be honest, we were a pretty exasperating bunch. I still remember his favorite word: 'diligence.' I wasn't sure what it meant; all I knew was that we sure didn't have much of it. Believe me, he made that clear. In eighth grade, we were presented to the church. Beforehand, the pastor drilled us on the kind of questions that he was going to ask, and when we stood before the congregation, we said what we had been taught to say. I really can't remember much about it. In some ways, though, it was like graduation, because not only did we graduate from the confirmation process but we also graduated from church. At least, I did. Now that I had done the 'religion thing' by being confirmed, the decision of whether to go to church was pretty much left up to me. Basically, I felt liberated from my religious commitment except for Christmas and Easter.

Tell Someone: You Can Share the Good News
Greg Laurie
Hardback