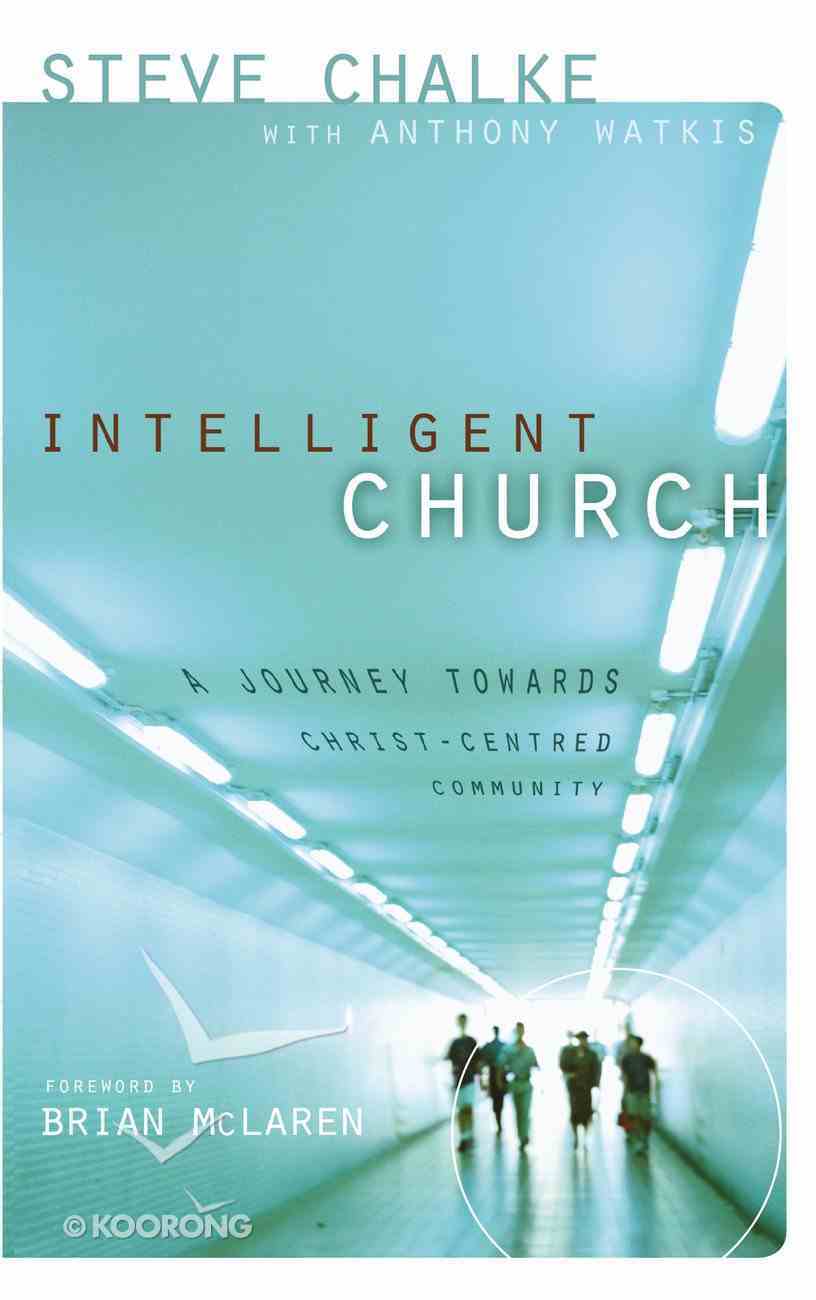 Becoming Conversant With the Emerging Church
D A Carson
Paperback

Becoming Conversant With the Emerging Church
D A Carson
eBook

The Out of Bounds Church?
Steve Taylor
eBook

Prepare Your Church For the Future
Carl George
Paperback

Intelligent Church Copyright 2006 by Steve Chalke Requests for information should be addressed to: Zondervan, Grand Rapids, Michigan 49530 Library of Congress Cataloging-in-Publication Data Chalke, Steve. Intelligent church : a journey towards Christ-centred community / Steve Chalke and Anthony Watkis.- 1st ed. p. cm. ISBN-13: 978-0-310-24884-2 ISBN-10: 0-310-24884-1 1. Mission of the church. 2. Church. I. Watkis, Anthony. II. Title. BV601.8.C43 2006 270.8'3 - dc22 2006001097 CIP Steve Chalke and Anthony Watkis assert the moral right to be identified as the authors of this work. All Scripture quotations, unless otherwise indicated, are taken from the Holy Bible: New International Version. NIV. Copyright 1973, 1978, 1984 by International Bible Society. Used by permission of Zondervan. All rights reserved. Scripture quotations marked (KJV) are taken from the Holy Bible, King James Version. The website addresses recommended throughout this book are offered as a resource to you. These websites are not intended in any way to be or imply an endorsement on the part of Zondervan, nor do we vouch for their content for the life of this book. All rights reserved. No part of this publication may be reproduced, stored in a retrieval system, or transmitted in any form or by any means - electronic, mechanical, photocopy, recording, or any other - except for brief quotations in printed reviews, without the prior permission of the publisher. Interior design by Mark Sheeres Printed in the United Kingdom 06 07 08 09 10 11 12 - 10 9 8 7 6 5 4 3 2 1 I had a strange experience recently. I was at a weekend retreat in the Wiltshire countryside with some of the leadership team of my church. At lunchtime on Saturday a few of us ventured to the supermarket in the nearest town to buy food. As we walked up to the doors of the shop, we noticed a few people standing outside the building with a banner announcing Saint Luke's Church. Thinking that this was part of the church's mission to the local community, we decided to stop for a chat and to offer some encouragement. Incredibly, though, as we approached, a man in clerical dress started shaking a collection tin in our faces. He was, it seems, of the belief that we (and, presumably, the rest of those out shopping for groceries) should make a donation to Saint Luke's organ refurbishment fund. We stopped and talked, but however hard we tried to change the conversation, they were only interested in discussing keyboards, pedals and pipes. As we wandered off I was overcome by the sad realisation that the only message the shoppers heard from the church that day was, 'We're broke. Please save us!' This story is a modern-day parable. I can almost hear it - told with style - on the lips of Jesus. It triggers me to consider again the purpose of the church. Have we concentrated our efforts in the right place? Are we trying so hard to save ourselves that we've forgotten what we are really here to do? Who are we? Why do we exist? How do we develop an intelligent response to the communities in which we find ourselves living? redefinition Intelligent churches in the twenty-first century will take many different forms, but window dressing is not our concern here. Rather, the task ahead is to nail down what it means to be church - to discern what core values, principles, and theology should be the hallmarks of our churches. We will determine not what shape churches should take as much as from what substance they should be formed. A former archbishop of Canterbury, William Temple, prophetically warned, 'If a man's concept of God is at error, the more fundamentally committed he is to it, the more damage he will do.' With that in mind
-Publisher

Anthony Watkis is a graduate of London School of Theology. He is a professional writer and works with Oasis UK.

Steve Chalke is the founder of Oasis Global, the Faithworks Movement, Parentalk, and the Church.co.uk Network. In 2004 he was awarded an MBE by the Queen for his work in social inclusion. He is currently the Guinness World Record holder of the most charitable money ever raised through a single sporting event, having captured his title at the 2007 London Marathon from Sir Steve Redgrave.
He is the author of a number of challenging books on the Emergent church including Intelligent Church: A Journey Towards Christ-Centred Community, The Lost Message of Jesus, Change Agents: 25 Hard-Learned Lessons in the Art of Getting Things Done and Trust: A Radical Manifesto. Most recently he has written Apprentice: Walking the Way of Christ.
Koorong -Editorial Review.