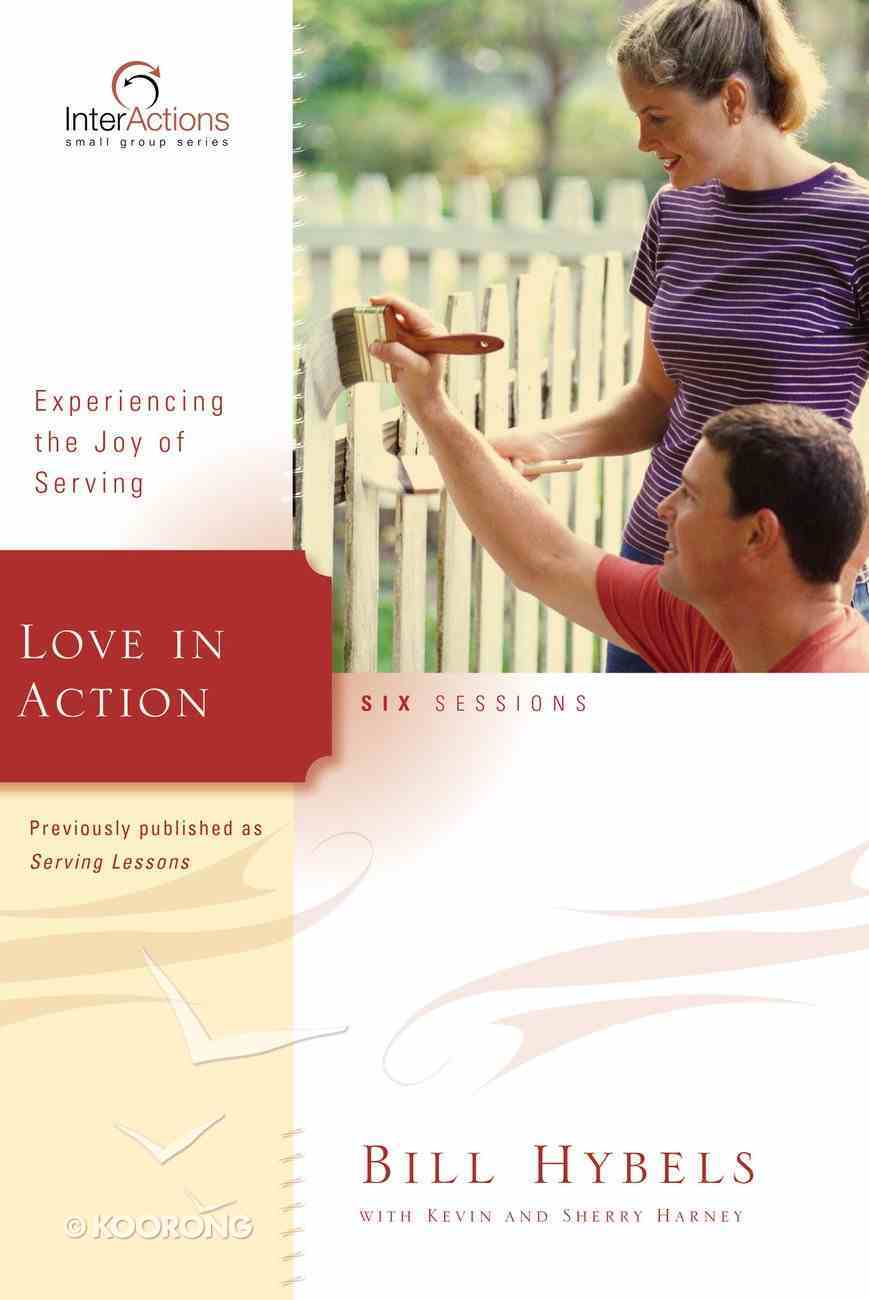 Love in ActionCopyright 1998 by Willow Creek AssociationPreviously published as Serving LessonsRequests for information should be addressed to:Zondervan, Grand Rapids, Michigan 49530ISBN-10: 0-310-26607-6ISBN-13: 978-0-310-26607-5All Scripture quotations, unless otherwise indicated, are taken from the Holy Bible: New InternationalVersion. NIV. Copyright 1973, 1978, 1984 by International Bible Society. Used by permission ofZondervan. All rights reserved.All rights reserved. No part of this publication may be reproduced, stored in a retrieval system, ortransmitted in any form or by any means-electronic, mechanical, photocopy, recording, or any other-except for brief quotations in printed reviews, without the prior permission of the publisher.Interior design by Rick Devon and Michelle EspinozaPrinted in the United States of America05 06 07 08 09 10 11 12 /?DCI/ 10 9 8 7 6 5 4 3 2 1T H E B I G P I C T U R EWhat is the message of our culture today? What is the commonthread of thought that weaves its way through almosteverything we do? What is the core value that drives andguides the lives of most people? All we have to do is walkaround in our society and we will begin to develop this particularmind-set almost by osmosis.It is a "me-first" mind-set. This mind-set says indulge yourself,fulfill your desires, satiate your appetites, pursue pleasure,take off all restraints. As much as we might want to pretendthat this value system died in the eighties, let''s behonest: it is alive and still thriving.With this mind-set comes an elusive promise: If you seek firstyour own good and satisfy your own desires, then you will behappy. In print, on television, and in the movies, over andover we hear the lie. The road to contentment, satisfaction,fulfillment, and true joy is marked with a street sign flashing"Me First."The truth is, this perverted and backward view of life is leadingto modern day madness. Our society is on the verge ofinternal collapse. Escapism is running rampant. Perversion ofsexuality has become almost common fare. Unwanted pregnanciesby the thousands are being terminated every day.Men and women walk away from their commitment tospouse, children, job, and many other life responsibilitieswith growing ease. People are pathologically self-centeredand ignore the needs of others. The "me-first" mind-set is controllingmany lives, even the lives of those who call themselvesfollowers of Christ.SESSION 1LOVE IN ACTIONEXPOSING THE"ME-FIRST"MIND-SETA W I D E A N G L E V I E W1. What are some signs that the "me-first" mind-set isalive and thriving in one of these areas:- In the marketplace- In the church- In families- In your country- In the mediaA B I B L I C A L P O R T R A I TRead Mark 8:31-38 2. What do you learn about Jesus'' view of Himself in thispassage?What do you learn about Jesus'' view of His followers?3. Jesus was clear about His commitment to suffer anddie for His followers. Why do you think Peter tried tostand in the way of Jesus'' plan?Why was Jesus'' response to Peter''s resistance so severe?S H A R P E N I N G T H E F O C U SRead Snapshot "Grappling with Greatness"4. What are some of the warning signs and symptomsyou see in your life when you are striving for a "positionof greatness"?GRAPPLING WITH GREATNESSJesus tried again and again to expose and attack self-centeredness in His disciples. He wanted themto have a "Father-first" mind-set but often saw their "me-first" mind-set prevailing. Once, while walkingdown a road toward a city called Capernaum, some of Jesus'' followers were debating amongthemselves which of them was the greatest. In the gospel of Mark we read these words: "They cameto Capernaum. When he was in the house, he asked them, ''What were you arguing about on theroad?'' But they kept quiet because on the way they had argued about who was the greatest" (Mark 9:33-34).Jesus had just preached a powerful sermon on servanthood, yet the disciples still did not get the point. In an effortto drive the point home even
-Publisher

Discover the joy of serving others. How can you identify full devoted followers of Christ? Their servant lifestyle gives them away! In our 'me-first' culture, servanthood is the earmark of men and women who have discovered the joy of giving. But the secret to servanthood isn't running yourself ragged trying to be everything to everyone---it's pouring freely out of a full cup the things you were designed to give. Love in Action shows how you can break the back of self-centeredness and experience the satisfaction of serving others wisely and effectively. You'll discover how sharing your unique personal resources and spiritual gifts can become a source of strength to others, worship and praise to God, and a personal delight that nothing else can match! Interactions---a powerful and challenging tool for building deep relationships between you and your group members, and you and God. Interactions is far more than another group Bible study. It's a cutting-edge series designed to help small group participants develop into fully devoted followers of Christ.
-Publisher

Kevin G. Harney is the Teaching Pastor and Evangelism Champion at Faith Church in Dyer, Indiana and Central Wesleyan Church in Holland, MI. He is also on the Teaching Team of the campus ministry at Grand Valley State University in Allendale, Michigan. He is author of Leadership from the Inside Out: Examining the Inner Life of a Healthy Church Leader; Seismic Shifts, the little changes that make a BIG difference in your life; John: An Intimate Look at the Saviour; Ephesians: Bringing Heaven to Earth, and co-author of the Willow Creek Interactions series, the Willow Creek New Community series, the Old Testament Challenge series, and Finding a Church You Can Love and Loving the Church You've Found.