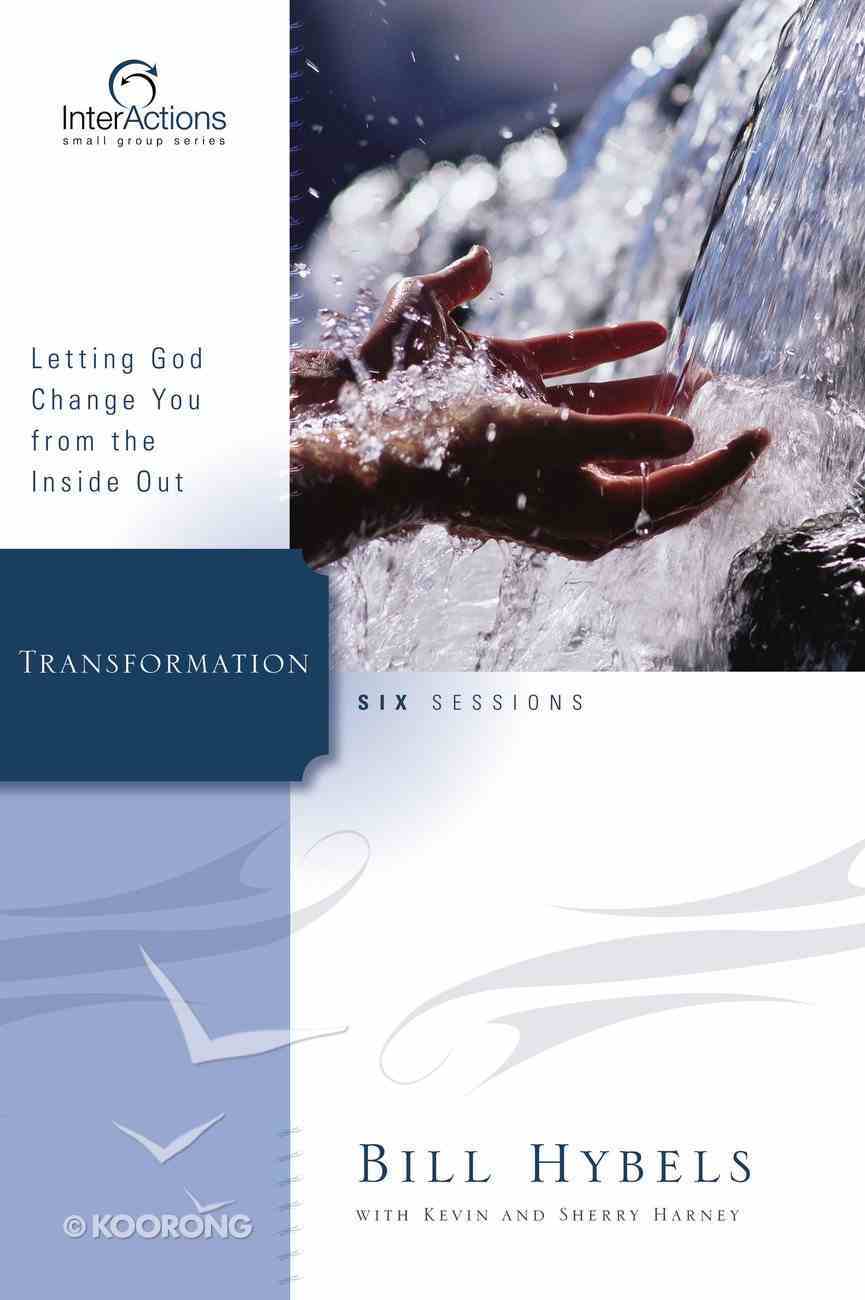 Interactions: Transformation - Letting God Change You From the Inside Out (Interactions Small Group Series)

Team up with God for the project of your life! Right now, God is ready to transform your life. But He wants your partnership. The strength and guidance for transformation come from Him--but the "green light" can only come from...

Redeemed Sexuality: 12 Sessions For Healing and Transformation in Community
Andrew A Boa
eBook

Team up with God for the project of your life! Right now, God is ready to transform your life. But He wants your partnership. The strength and guidance for transformation come from Him--but the "green light" can only come from you.Transformation will help you recognize and cooperate with God's transforming influence in your life. Each session focuses on a critical area He has targeted for change and growth. You'll learn proven ways of responding to God's guidance that will keep you growing closer to Him. You'll also discover an inspiring picture of what awaits you as a fully devoted follower--membership in a joyous, supportive community of believers, infused with God's love.Interactions--a powerful, challenging tool for building deep relationships between you and your group member, and you and God. Interaction is far more than another group Bible study. It's a cutting-edge series designed to help small group participants develop into fully devoted followers of Christ. If you are the d
-Publisher

TransformationCopyright 1997 by Willow Creek AssociationRequests for information should be addressed to:Zondervan, Grand Rapids, Michigan 49530ISBN-10: 0-310-26598-3ISBN-13: 978-0-310-26598-6All Scripture quotations, unless otherwise indicated, are taken from the Holy Bible: New InternationalVersion. NIV. Copyright 1973, 1978, 1984 by International Bible Society. Used by permission ofZondervan Publishing House. All rights reserved.All rights reserved. No part of this publication may be reproduced, stored in a retrieval system, ortransmitted in any form or by any means-electronic, mechanical, photocopy, recording, or anyother-except for brief quotations in printed reviews, without the prior permission of the publisher.Interior design by Rick Devon and Michelle EspinozaPrinted in the United States of America05 06 07 08 09 10 11 12 /?DCI/ 10 9 8 7 6 5 4 3 2 1S E S S I O N 1 T R A N S F O R M A T I O NA NEWHEARTT H E B I G P I C T U R EThere is a very serious heart disease we should all know about.I call it "the disease of hard-heartedness." There is also a verypainful but effective cure for this disease.Many times in the Old Testament we read that God accused thepeople of Israel of being hard-hearted. In the New Testament,Jesus would sometimes tell the religious leaders, and even Hisown followers, "Your hearts are so hard!" In the Bible "hardhearted"refers to the unresponsive, stiff, angry, insensitive,rebellious, and independent attitude ruling our hearts. This attitudeis first directed toward God, but also toward other people.Jesus told a parable of a farmer who went out and sowed seeds.You don''t have to have a green thumb to know that the objectof sowing seed is to get it into fertile soil so it can take rootand produce fruit. Jesus pointed out that often when a farmerwould throw seed, some would land on hard-packed soil.That seed was wasted; it would never grow. Jesus went onto explain what He meant by this agricultural story. Somepeople''s hearts are impenetrable, hardened, unresponsive,and callous. The Word of God just bounces off. It doesn''teven take root.If I were to nominate a biblical character for the "Iron HeartAward," I would submit the man who was crucified next toJesus. When Jesus was nailed to the cross, there was a criminalbeing executed on His right and another on His left. One wasa repentant thief. In the last moments of his life, he softenedhis heart and said, "Oh Lord, would You remember me?" Jesussaid to him, "Today you''ll be with Me in paradise." But theother thief, who was being crucified for a life of crime andviolence, had a hard heart. He was minutes from death, inchesfrom the Savior, but his heart was like stone. He was busyhurling abuse and insults at Jesus.The repentant thief called over to the hard-hearted thief andsaid, "I can''t believe it. You are minutes away from death andinches away from the Savior and you''re still hard! Don''t youfear God?" From all indications of Scripture, the "Iron HeartAward" would have been presented to that unrepentant thiefon his arrival in hell. And that is what will happen ultimatelyto those people who spend their whole lives with an attitudeof hard-heartedness.A W I D E A N G L E V I E W1. If you were a spiritual doctor doing a test for hardheartedness,what are some of the symptoms youwould look for in your examination?A B I B L I C A L P O R T R A I TRead Ezekiel 11:17-21; 36:24-28 2. According to Ezekiel, idolatry was a sign of hard-heartedness.What did idolatry look like in Ezekiel''s day?What does idolatry look like in our day?A HARD HEARTHearts get hard when we habitually say no to God. The very first time you say no to God a little layerforms around your heart. The second time another layer goes around your heart. The third timeanother layer forms, and on and on it goes. A person who ends up saying no to God for a lifetimeends up with a heart encased by steel.As a person''s heart grows hard, two things begin to happen. First, the hardness drives them farthera
-Publisher

Kevin G. Harney is the Teaching Pastor and Evangelism Champion at Faith Church in Dyer, Indiana and Central Wesleyan Church in Holland, MI. He is also on the Teaching Team of the campus ministry at Grand Valley State University in Allendale, Michigan. He is author of Leadership from the Inside Out: Examining the Inner Life of a Healthy Church Leader; Seismic Shifts, the little changes that make a BIG difference in your life; John: An Intimate Look at the Saviour; Ephesians: Bringing Heaven to Earth, and co-author of the Willow Creek Interactions series, the Willow Creek New Community series, the Old Testament Challenge series, and Finding a Church You Can Love and Loving the Church You've Found.