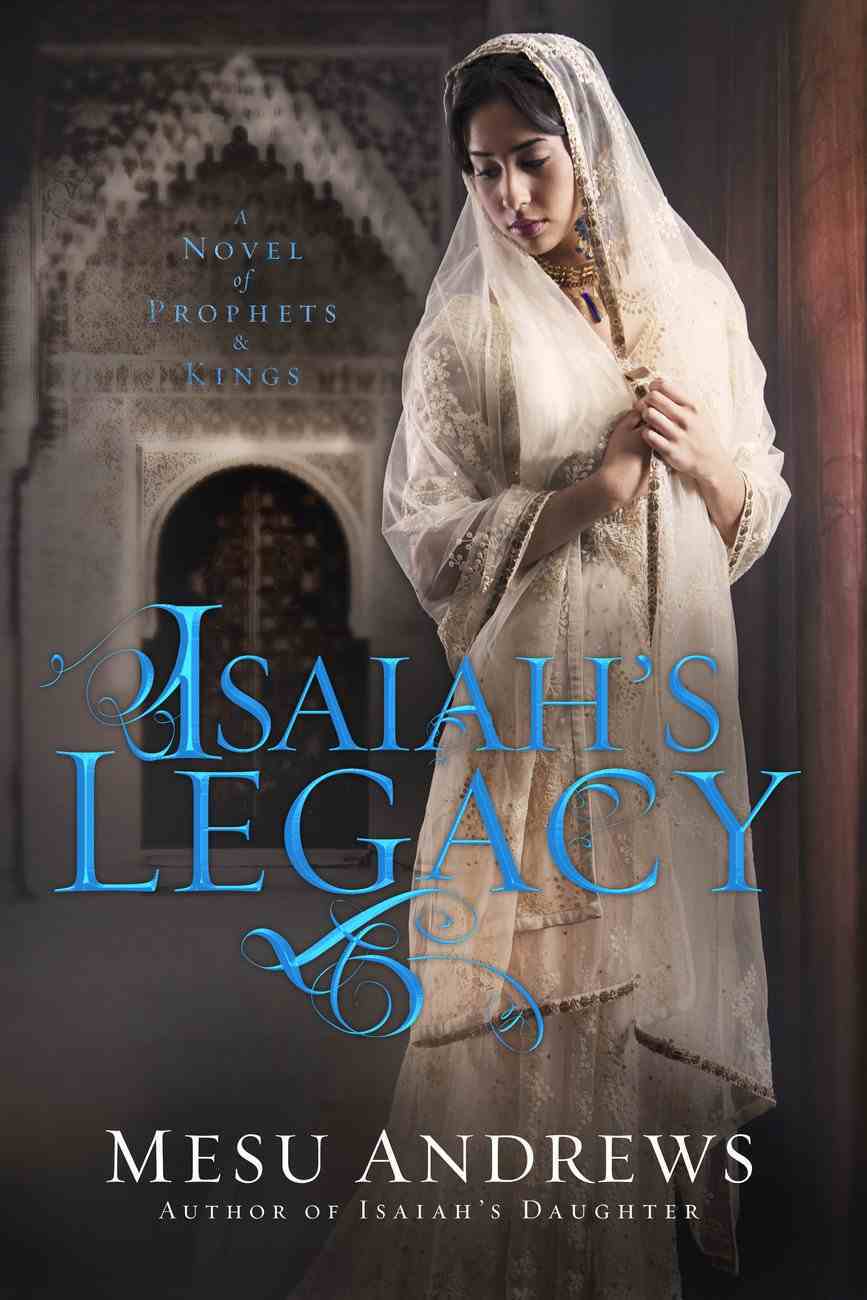 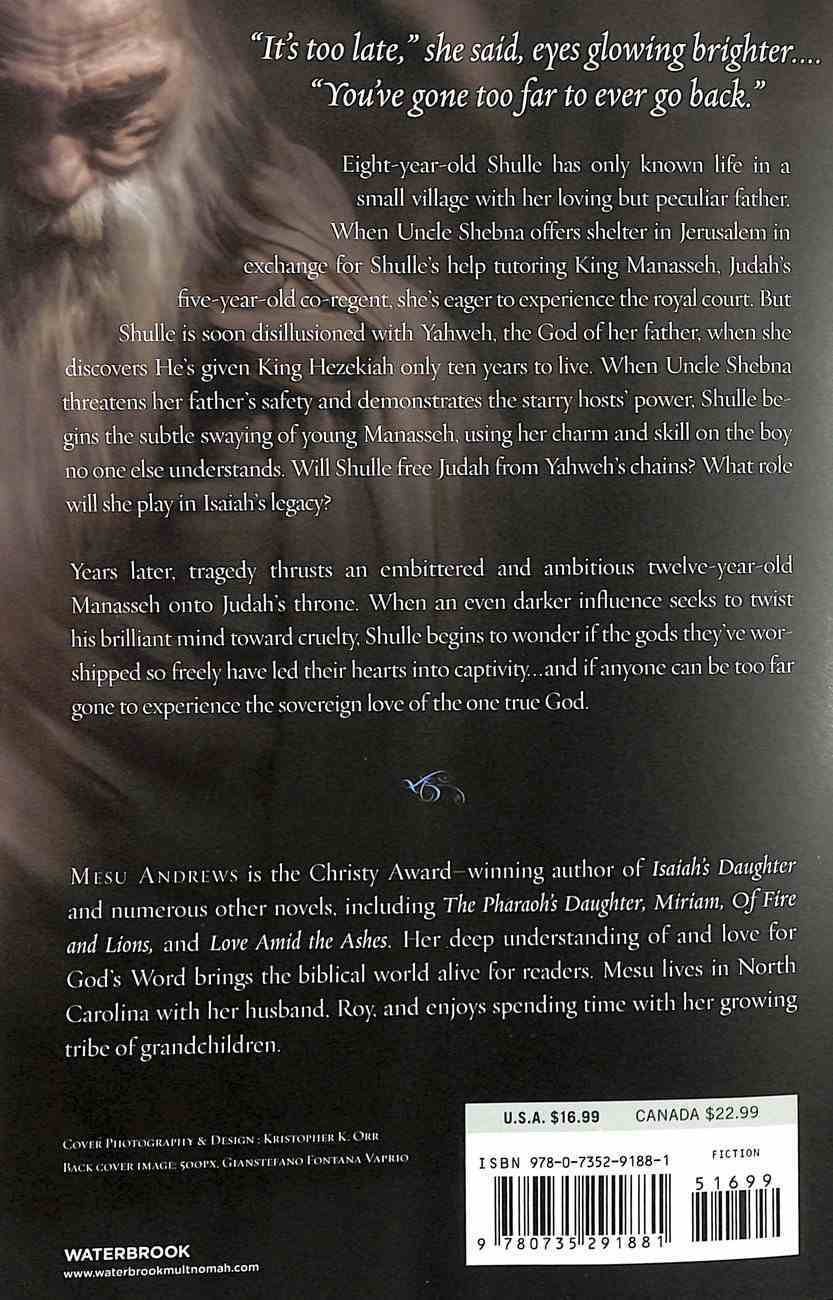 Isaiah's Legacy: A Novel of Prophets and Kings

:The drama of the Old Testament comes to life as Judah's most notorious king ascends to the throne in this gripping novel from the award-winning author of Isaiah's Daughter. At eight years old, Shulle has known only life in...

:The drama of the Old Testament comes to life as Judah's most notorious king ascends to the throne in this gripping novel from the award-winning author of Isaiah's Daughter.

At eight years old, Shulle has known only life in a small village with her loving but peculiar father. When Uncle Shebna offers shelter in Jerusalem in exchange for Shulle's help tutoring King Manasseh, Judah's five-year-old co-regent who displays the same peculiarities as her father, she's eager to experience the royal court. But Shulle soon realises the limits of her father's strict adherence to Yahweh's Law when Uncle Shebna teaches her of the starry hosts and their power.

Convinced Judah must be freed from Yahweh's chains, she begins the subtle swaying of young Manasseh, using her charm and skills on the boy no one else understands. When King Hezekiah dies, twelve-year-old Manasseh is thrust onto Judah's throne, bitter at Yahweh and eager to marry the girl he adores. Assyria's crown prince favours Manasseh and twists his brilliant mind toward cruelty, beginning Shulle's long and harrowing journey to discover the Yahweh she'd never known, guided with loving wisdom by Manasseh's mother: Isaiah's daughter, the heartbroken Hephzibah. Amid Judah's dark days, a desperate remnant emerges, claiming the Lord's promise, 'Though we're helpless now, we're never hopeless--because we serve El Shaddai.' Shulle is among them, a girl who becomes a queen through Isaiah's legacy.
-Publisher

Mesu Andrews is the author of "Love Amid the Ashes" and "Love's Sacred Song". She is an active speaker who has devoted herself to passionate and intense study of Scripture. Harnessing her deep understanding and love for God's Word, Andrews brings the biblical world vividly alive for her readers. She lives in Washington. A

I hated weeding the garden alone, but I&rsquo;d rather Abba copy his scrolls inside than bear our neighbor&rsquo;s cutting remarks. Why did others ridicule what they couldn&rsquo;t understand? Abba couldn&rsquo;t tolerate wool against his skin, and linen cost too much for him to own more than one robe. Garden work would ruin it, so one day he worked bare chested&mdash;and earned the wrath of the village elders. They had treated him with suspicion ever since. Though it happened three years ago when I was only five, I still remembered the shame on Abba&rsquo;s face. We held each other that afternoon and wept, prisoners in our own home.


Fury strengthened my grip on a wayward green sprout. &ldquo;Ouch!&rdquo; Dropping the thistle, I sucked on my finger and removed the barb with my teeth.


&ldquo;Are you all right, Meshullemeth?&rdquo; Our neighbor&rsquo;s singsong voice rubbed at my raw mood. I spit on the ground and returned to my work. Of course I was all right. It was just a thistle.


&ldquo;Haruz works that poor little girl like a mule,&rdquo; the neighbor woman said to her maid. &ldquo;I don&rsquo;t know why the elders don&rsquo;t take her away from him. She should be with a real family.&rdquo;


I pretended not to hear and kept my back bent, head down. Abba and I were a real family. What did she know about our lives? How many eight-year-old girls could write? I could. How many could read the Torah? Perhaps I should write a complaint to the elders about her. I sighed. Abba would never allow it. He would quote King Solomon, Anxiety weighs down the heart, but a kind word cheers it up.


Abba was too nice.


The ground under my feet began to tremble, and I looked at the neighbor woman to see if she noticed. She was too busy talking. By the time she looked to the southeast, I knew it was the pounding of many horses.


&ldquo;Shulle, get in the house!&rdquo; Abba shouted from the threshold of our little house. Tucking my robe into my belt, I ran fast as a deer. Maybe someday Abba and I would follow one of those pretty creatures into the forest. Live alone. Away from the wagging tongues of Jotbah. He always made me hide when travelers passed by. I once asked why, and he said because I was his only treasure.


I dashed through our curtained doorway and closed it behind me. Abba knelt beside it, gathering me in his arms so we could peek outside together as the caravan passed. A line of chariots and horses led a golden coach over the rise, followed by a cloud of dust that made our neighbor woman cough. She was too nosy to go inside and escape.


Surprisingly, the first chariot stopped in front of her house, and a little man dismounted and approached her. His driver remained in the chariot, while the little man talked with our neighbor. In a moment both began pointing our direction.


&ldquo;What are they saying, Abba?&rdquo; He was tugging absently on his beard, so I captured his hand between mine. &ldquo;Fear, surprise, excitement, or joy?&rdquo; It was our game to decide why he tugged at his beard. Abba couldn&rsquo;t always tell me how he felt.


He kissed my hands and explained. &ldquo;That man with the soldiers is my older brother, your dohd Shebna. I haven&rsquo;t seen him since your ima and I left Jerusalem many years ago. I don&rsquo;t know why he&rsquo;s come.&rdquo;


The little man bowed to our neighbor, and two soldiers followed him as he walked toward our house. That&rsquo;s when I noticed his face looked just like Abba&rsquo;s. Smaller, but the same hooked nose and close-set black eyes.


Abba nudged me toward the ladder in our one-room home. &ldquo;Hide in the loft.&rdquo;


I hurried and hid under my tattered blanket. It was warmer than the bread oven, but I thought my father was afraid, so I obeyed.


A bony hand drew back our curtain. Dohd Shebna and two soldiers stepped across the threshold without an invitation. The little man&rsquo;s lips curved into in a smile, but his eyes squinted, studying every object in our home&mdash;and then landed on Abba.


&ldquo;You&rsquo;re even bigger than you were when you left Jerusalem.&rdquo;


&ldquo;You were old enough to marry my Adnah.&rdquo;


&ldquo;The Torah says honor your parents.&rdquo; Abba shifted from one foot to the other now, pulling hairs from his beard. &ldquo;I obeyed our abba.&rdquo; I didn&rsquo;t like the effect this little man had on him. It was our home, not his, and Abba&rsquo;s beard had just grown back after the elders accused him of stealing the neighbor&rsquo;s cow. They found the cow two days later in the forest. Why did people think they could accuse and belittle a good man just because he was different?


I threw off my blanket. &ldquo;We offered you bread and wine, as the laws of hospitality command, but you are not welcome here if you disrespect my abba.&rdquo; The startled looks on all four men&rsquo;s faces lasted only a moment before Shebna and his soldiers began their mocking.


&ldquo;You have the fire of your ima, little one.&rdquo; Dohd Shebna laughed. &ldquo;What is your name?&rdquo;


&ldquo;On the contrary.&rdquo; Dohd Shebna fixed his gaze on me. &ldquo;Meshullemeth is the very reason I&rsquo;ve come to Jotbah. She must return to Jerusalem with me and help the king and queen teach Prince Manasseh how to communicate&mdash;&rdquo;


&ldquo;Get out!&rdquo; Abba shoved him into his two guards. &ldquo;You can&rsquo;t take her from me. Leave!&rdquo;


The guards drew their swords, and I rushed down the ladder. &ldquo;No!&rdquo;


Shebna stepped between his men and Abba. &ldquo;Put away the swords.&rdquo; He fixed his eyes on me. &ldquo;You look just like Adnah.&rdquo; Mouth gaping, his arrogant smirk was gone.


Abba lifted me into his arms, and I circled one arm over his shoulder. &ldquo;Dohd Shebna came a long way,&rdquo; I said softly. Perhaps we should listen to what he came to say.&rdquo;


Abba pecked my cheek with a kiss and whispered, &ldquo;We must not let him separate us, Shulle.&rdquo; He set my feet on the floor and nudged me behind him as if he were afraid Dohd would snatch me away. Then he reached for our circular leather mat and laid it on the floor, while I chose our three best cushions. &ldquo;Sit down,&rdquo; he said to our guests, handing them the worn pillows I&rsquo;d chosen. I brought out the loaves of bread I&rsquo;d saved after breaking our fast this morning. It was all we had for the rest of this day, but it was unthinkable to let visitors leave without feeding them.


&ldquo;Did you bake these?&rdquo; Dohd asked me as Abba offered the loaves to the men and joined them around the leather mat. Abba nodded permission for me to answer as he filled four cups with watered wine.


&ldquo;Yes. I baked the bread this morning, my lord.&rdquo; I called him lord because of his fancy purple robe.


&ldquo;You&rsquo;re quite grown up for an eight-year-old.&rdquo; He picked up his cup and looked at Abba over the rim. After a long drink, he added, &ldquo;You&rsquo;ve trained her well, Haruz. I&rsquo;m impressed.&rdquo;


Abba stared at the bread on his plate, but I saw a faint smile. &ldquo;I&rsquo;ve trained her to read the Torah and write Hebrew and Aramaic, but it&rsquo;s Shulle who trained me to entertain a guest.&rdquo;


Dohd took a quick sip and set aside his cup. &ldquo;Which is why she must come with me to Jerusalem. Prince Manasseh is soon to be made co-regent and shows many of the same signs you did at age five.&rdquo;


&ldquo;I plan to, but children learn best from other children who understand them.&rdquo; Dohd waved me over to join them. Abba&rsquo;s open arms were my safe invitation. Once I settled on Abba&rsquo;s lap, Dohd spoke to us both. &ldquo;When King Hezekiah was a small boy, he witnessed his older brother being sacrificed in a pagan altar fire. Hezekiah was so traumatized he lost the ability to speak until a little girl named Ishma&mdash;who had also been traumatized by captivity and slavery&mdash;helped restore his speech. That little girl became his best friend and was given permission to learn alongside him and the other royal boys of Judah.&rdquo;


I turned a disbelieving stare on Abba. &ldquo;How have you never told me of Ishma?&rdquo;


He chuckled, rubbing his thumb over my hand. &ldquo;I have. Ishma was taken into Isaiah&rsquo;s household, adopted as his daughter, and given a new name, Hephzibah. You know her as Queen Zibah.&rdquo;


&ldquo;The queen was a slave?&rdquo; I couldn&rsquo;t imagine it. &ldquo;She was the little girl who helped King Hezekiah?&rdquo;


Abba nodded, and Dohd touched my arm as gently as if he were stroking a dove. &ldquo;I&rsquo;d like you to be that little girl for Prince Manasseh, Shulle.&rdquo;