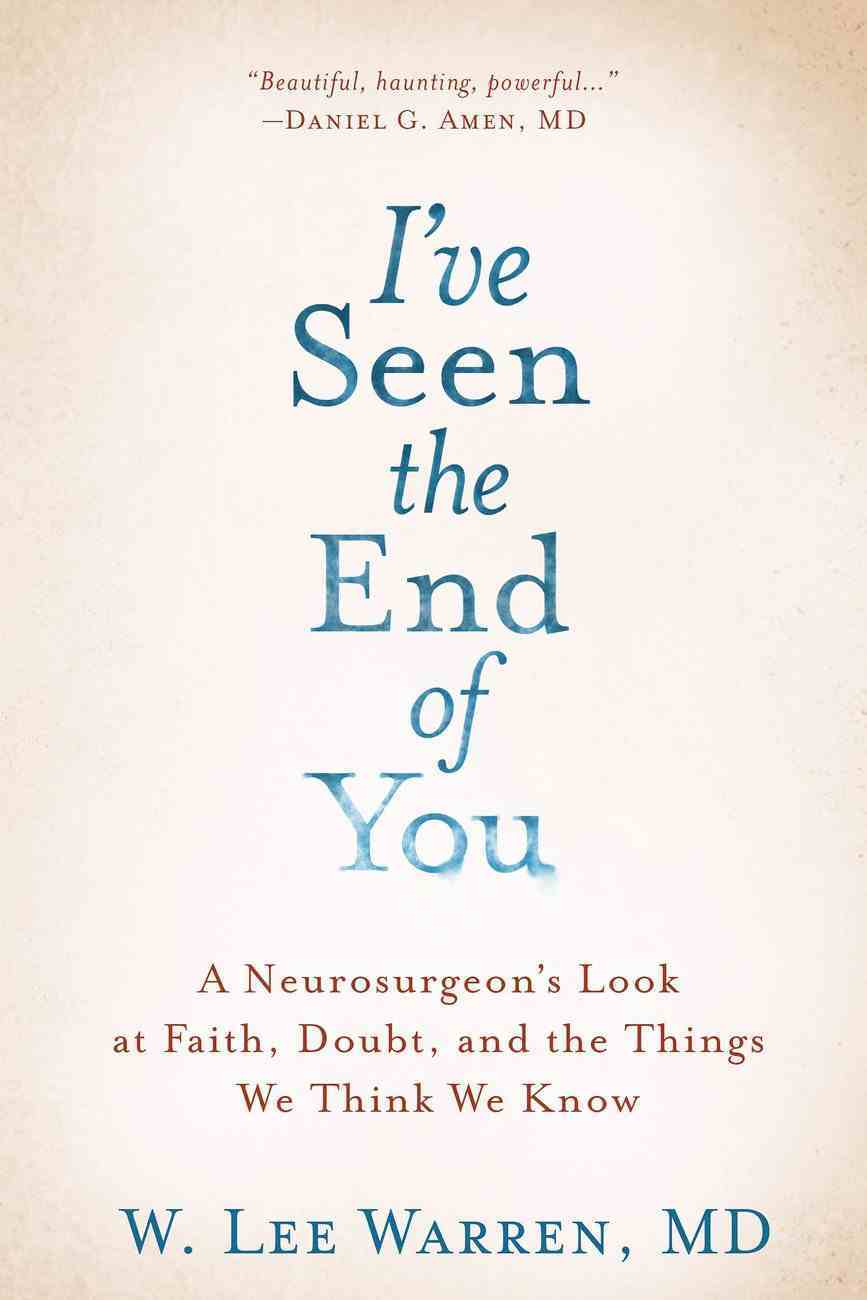 I've Seen the End of You: A Neurosurgeon's Look At Faith, Doubt, and the Things We Think We Know

:This gripping, inspirational memoir grapples with the tension between faith and science--and between death and hope--as a seasoned neurosurgeon faces insurmountable odds and grief both in the office and at home. Dr. W. Lee Warren, a practising brain surgeon,...

I've Seen the End of You
W Lee Warren
eBook

I've Never Been to Vegas, But My Luggage Has
Mandy Hale
eBook

I've Never Been This Old Before
Stan Toler
eBook

I've Never Been to Vegas, But My Luggage Has
Mandy Hale
eAudio

:This gripping, inspirational memoir grapples with the tension between faith and science--and between death and hope--as a seasoned neurosurgeon faces insurmountable odds and grief both in the office and at home.

Dr. W. Lee Warren, a practising brain surgeon, assumed he knew most outcomes for people with glioblastoma, head injuries, and other health-care problems. Yet even as he tried to give patients hope, his own heart would sink as he realised, 'I've seen the end of you'.

But it became far more personal when the acclaimed doctor experienced an unimaginable family tragedy. That's when he reached the end of himself.

Page-turning medical stories serve as the backdrop for a raw, honest look at how we can remain on solid ground when everything goes wrong and how we can find light in the darkest hours of life.

'I've Seen the End of You' is the rare book that offers tender empathy and tangible hope for those who are suffering. No matter what you're facing, this doesn't have to be the end. Even when nothing seems to makes sense, God can transform your circumstances and your life. And he can offer a new beginning.
-Publisher


If you have questions, ask away. Just be prepared when God answers.


&mdash;Craig Groeschel, Hope in the Dark


&ldquo;Don&rsquo;t get so far out!&rdquo; I yelled over the wind and the crashing surf. The kids were playing in the waves, laughing and grinning and dunking one another, their heads popping out of the water and going back under like fishermen&rsquo;s bobbers.


The day had been almost magical. For a blended family like ours, getting everyone together in the same place at the same time was something of a miracle in itself. Lisa and I sat on the beach, soaking in the sun and the love and the togetherness we so needed.


Our older son, Josh, was twenty-two and about to move from Alabama back to San Antonio to work for his dad. Caity was eighteen and head over heels for my scrub tech and Iraq War colleague, Nate, who had come to work for us after the war and had tried for years to resist falling for his employers&rsquo; daughter, to no avail.


Kimber was fifteen and lived in a nearby town with her mother, along with thirteen-year-old Mitch and our youngest daughter, Kalyn, who was ten.


Our family was a beautiful blended mess, but it was our family, and having everyone at the beach together meant the world to us.


When God brought Lisa into my life, &ldquo;her&rdquo; kids (Josh and Caity) and &ldquo;my&rdquo; kids (Kimber, Mitch, and Kalyn) instantly became &ldquo;our&rdquo; kids&mdash;they even said vows to one another at our wedding. But as the years went by and everyone got older, we knew schedules and jobs and weddings would make days like these even rarer and more special.


An hour earlier Lisa&rsquo;s dad, Dennis, had baptized Nate in the ocean. All of us stood in the waist-deep water and held hands while Dennis led us in prayer and thanked God for the day and the sun and the love swirling in the waves around us. Nate had never been baptized, and he&rsquo;d asked Dennis, whom the kids have all called Tata since Josh&rsquo;s first attempt as a baby to say &ldquo;Grandpa,&rdquo; whether he would do it.


Nate confessed his belief in Jesus, Tata dunked him under the water, and we sang hymns in the Gulf of Mexico.


A few miles offshore a storm was pushing bigger and bigger waves to the beach. It made the bodysurfing a lot of fun, but at the same time the rough water brought seaweed and countless jellyfish with it. Josh and Mitch were the first to realize this, and they both came screaming out of the water with jellies in their shorts. We all laughed and cringed simultaneously.


And now, as the sun began its brilliant dive into the western sky and our memory-filled day was drawing to a close, I noticed that Mitch was getting farther and farther from where the other kids still splashed.


&ldquo;Come back in!&rdquo; I called as loudly as I could. Mitch didn&rsquo;t seem to hear. He just waved and dove back under the surf.


I stepped out into the water and felt the undercurrent picking up with each departing surge.


Mitch wasn&rsquo;t a strong swimmer, and I knew he was too far out to be safe. I waded into the surf to get him, but when Josh heard me call, he noticed his little brother and swam out and brought Mitch in.


Josh and Mitch came bounding out of the ocean together, laughing and smiling with their arms around each other. Lisa snapped a couple of pictures of them, which are still in a frame on Josh&rsquo;s desk to this day.


I can see that scene in my mind&rsquo;s eye now, a decade later. That&rsquo;s what our family does: we swim out to help one another. From the moment Lisa and I decided to blend our two families into one, it&rsquo;s been all in for all of us. The kids never called one another &ldquo;step&rdquo; siblings. It&rsquo;s been a beautiful, healing experience to see God turn two hurting groups into one whole tribe.


The rest of the family went back up the hill to the house we were renting, and Lisa and I stayed on the beach for a while to enjoy the sunset. We held hands and talked about how faith and family and days like this were so important.


As darkness sneaked over the horizon, marking the end of a day I was thankful for even as I mourned its conclusion, we walked back to the house together.


In my mind that night, I replayed the pictures of our five kids in the same frame. I could see their smiles, hear their voices, and feel the love and emotion during Nate&rsquo;s baptism and our special time together. The next morning we would be returning to Auburn, Alabama, and I knew that within a few days our vacation would slip into memory as we got back to work. Lisa ran our practice, and the business of solo-practice neurosurgery gave both of us more work to do than we&rsquo;d ever imagined.


My last thoughts before I slept that night took me back to the kids in the surf. I could see them playing, see the waves getting rougher and the hidden dangers like jellyfish and riptides lurking around them, see Mitch getting pulled away by the tide and Josh going to help him. Lisa and I talked about how hard it was to not have all of them with us every day and how much we wished it could be different.


When they were younger, I could wrap my arms around all of them, pull them out of trouble, keep them safe. Now they were moving and growing and spreading out all over the place: Josh heading to San Antonio, Caity going back home with us, and Kimber, Mitch, and Kalyn leaving for their mom&rsquo;s house an hour from Auburn. It would be a while before we were all together again.


How was I supposed to keep them all safe from the riptides of time, growth, and change?


While I was growing up, my parents gave me a simple faith. They taught me to trust that God would take care of us and make everything work out all right. We weren&rsquo;t naive to the troubles of the world, but we believed that they were all part of a plan and that we could trust in God&rsquo;s provision in the future because he&rsquo;d never failed us in the past. I&rsquo;d applied that same philosophy to raising my own kids, trying to give each of them the peace of mind that comes when faith becomes real in your life.


But teaching your kids something is one thing. When you turn off the lights at night and it&rsquo;s just you and your thoughts, how real is it?


We were about to spread across the country, go back to our daily lives, be distant from one another. Josh wouldn&rsquo;t be close by to swim out for Mitch anymore, Caity and Kimber would no longer share a room, and Kalyn wouldn&rsquo;t be right down the hall every night as she&rsquo;d been all week in the beach house.


But God had always been there before, no matter how stormy life had been through times of war, divorce, and stress.