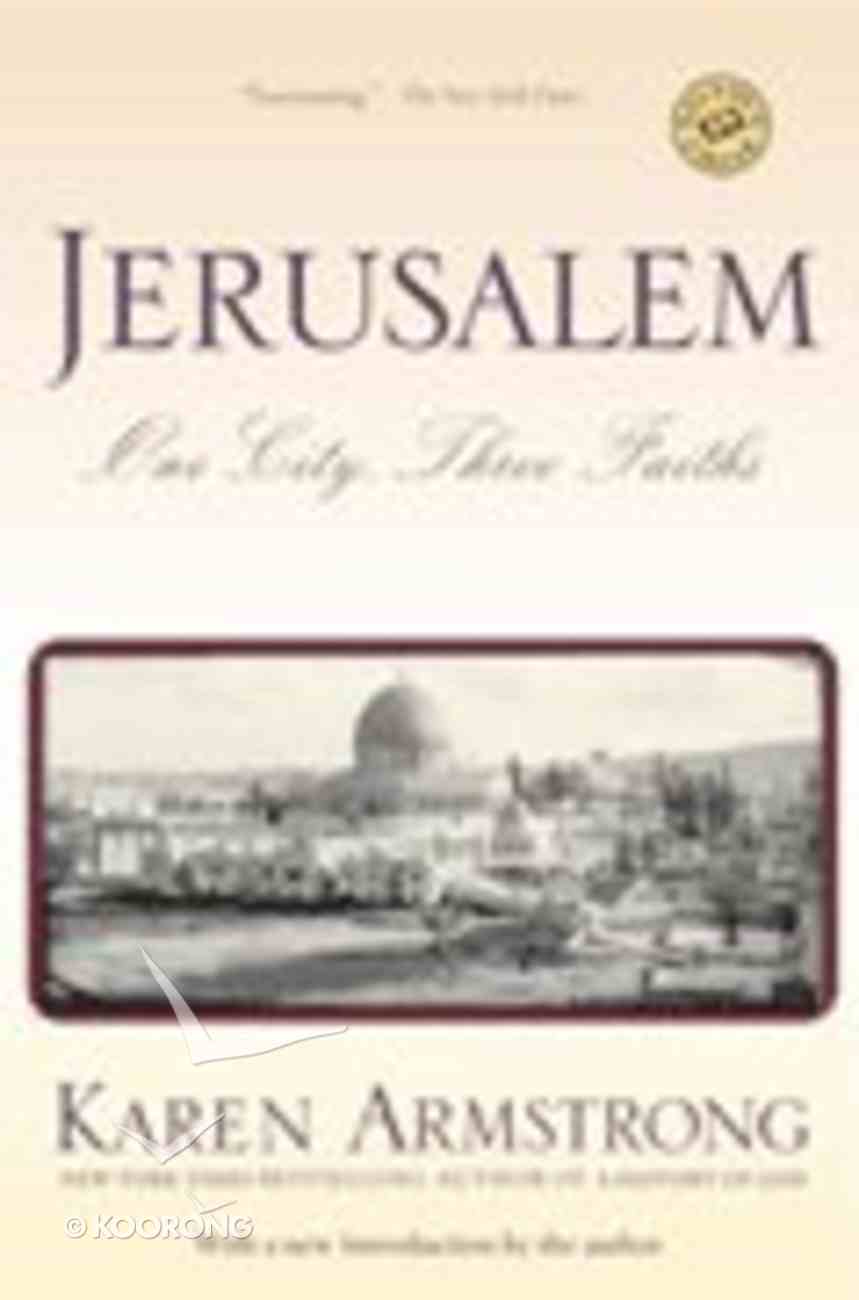 1. Has reading Jerusalem changed the way you view the city or any of the three faiths that claim it as their own? In what way? 2. Given the passion aroused by Jerusalem's sacred sites, do you think it is...

Battle For God: The Fundamentalism in Judaism, Christianity and Islam (Text Only)
Karen Armstrong
eBook

What About Other Faiths?
Martin Goldsmith
eBook

World Religions in a Nutshell: A Compact Guide to Reaching Those of Other Faiths
Ray Comfort
Paperback

1. Has reading Jerusalem changed the way you view the city or any of the three faiths that claim it as their own? In what way? 2. Given the passion aroused by Jerusalem's sacred sites, do you think it is possible for a practicing Jew, Christian, or Muslim to view the city objectively? Do you think that Armstrong views it objectively? 3. Have you ever experienced a place as "holy" or "sacred"? If so, what was that experience like? What sort of thoughts and feelings did you have? 4. In the book's introduction, Armstrong defines mythology as "an ancient form of psychology." What does she mean by this and do you agree with her definition? 5. Compassion is central to the doctrines of Judaism, Christianity, and Islam, and yet has been sadly missing throughout Jerusalem's history. Why do you think this is so? 6. Since social justice and peace are central to the ideal of a "holy city," can Jerusalemgiven its violent historytruly be regarded as "holy"? 7. After reading Jerusalem, do you think that one faith lays a greater claim to the city than the others? If so, which one and why? 8. "Suffering does not necessarily make us better, nobler people. All too often, quite the reverse," writes Armstrong. Nonetheless,we have many cultural myths about how suffering has the power to soften the hardest heart. In your opinion, which of these opposed viewpoints is more "true"? 9. For centuries, Jews did not consider the Western Wall to be sacred. Christians did not develop a devotion to the Stations of the Cross until the early 1600s. Only 150 years after the Prophet's death did Muslims claim that Muhammed ascended to heaven from the Dome of the Rock. In short, these sites were not originally regarded as holy, but only became so later in history through a sort of general consensus of the faithful. Does this surprise you? Does it change the way you view the world's sacred sites? How? 10. Armstrong believes that there is a deep human need to regard certain sites as holy or sacred, even in the modern era. Do you agree? 11. Throughout Jerusalem's history, construction was used as an "ideological weapon," "a means of obliterating the tenancy of the previous owners," writes Armstrong. Do you think that this has been true in other places as well? When and where? 12. For all of Jerusalem's dishearteningly violent history, there have also been long periods when Jews, Christians, and Muslims lived peacefully side by side. Today, that is decidedly not the case. How much do you think this change has been due to the creation of the state of Israel and how much to the tension among the faiths that has been growing for the last few centuries? 13. In ancient times, pilgrims visited Jerusalem to "see" God in the holy sites. In modern times, pilgrimsand especially Christiansvisit Jerusalem to see historical evidence that "proves" their faith. Yet, as Armstrong writes, archeology provides no clear answers. In light of this, can ours truly be called a more rational age or has one set of beliefs simply been replaced by another? 14. "Zionism would be a secular movement, inspired for the most part by Jews who had lost faith in religion," writes Armstrong. Does this statement surprise you? Do you agree with it? 15. In late 1996, Armstrong wrote: "As of this writing, the prospect of peace looks bleak." Do you think that Jerusalem's prospect for peace has improved, deteriorated, or remained more or less the same since then? 16. Have you visited Jerusalem? Are you more or less likely to visitor return tothe city after reading the book?
-Publisher

Venerated for millennia by three faiths, torn by irreconcilable conflict, conquered, rebuilt, and mourned for again and again, Jerusalem is a sacred city whose very sacredness has engendered terrible tragedy. In this fascinating volume, Karen Armstrong, author of the highly praised A History of God, traces the history of how Jews, Christians, and Muslims have all laid claim to Jerusalem as their holy place, and how three radically different concepts of holiness have shaped and scarred the city for thousands of years.

Armstrong unfolds a complex story of spiritual upheaval and political transformation--from King David's capital to an administrative outpost of the Roman Empire, from the cosmopolitan city sanctified by Christ to the spiritual center conquered and glorified by Muslims, from the gleaming prize of European Crusaders to the bullet-ridden symbol of the present-day Arab-Israeli conflict.

Written with grace and clarity, the product of years of meticulous research, Jerusalem combines the pageant of history with the profundity of searching spiritual analysis. Like Karen Armstrong's A History of God, Jerusalem is a book for the ages.

"THE BEST SERIOUS, ACCESSIBLE HISTORY OF THE MOST SPIRITUALLY IMPORTANT CITY IN THE WORLD."
--The Baltimore Sun

Karen Armstrong, author, scholar, and journalist, is among the world's foremost commentators on religious history and culture. Her books include the bestselling "A History of God" and "The Battle for God", as well as "Buddha" and "Islam: A Short History". C