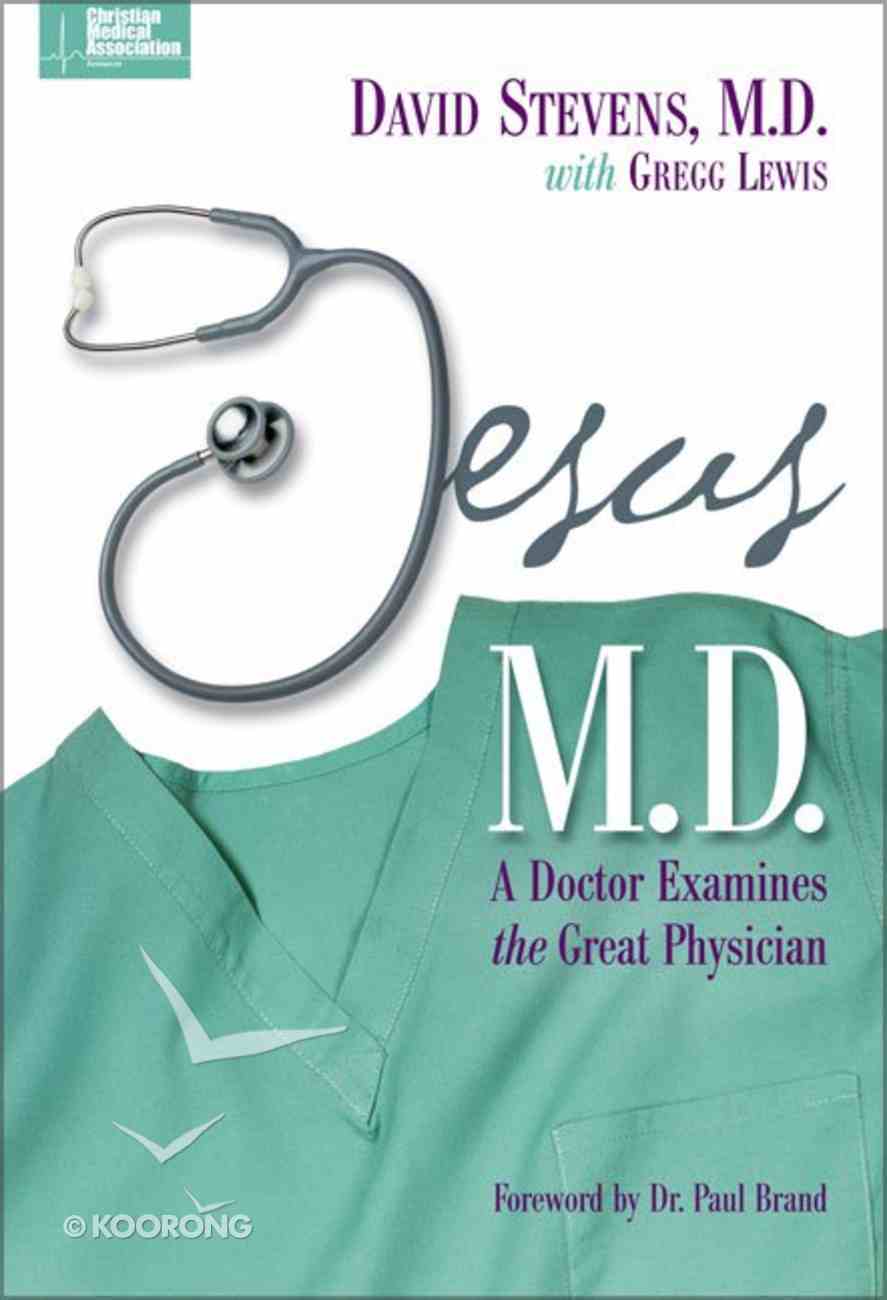 Jesus--the ultimate doctor. His touch extended grace to the sick and sinful of ancient Palestine and left a miracle in its wake. And his ministry hasn't ceased. Today, he looks for willing hearts and hands through which he can heal...

A Cup of Comfort For Nurses
Colleen Sell
eBook

Jesus--the ultimate doctor. His touch extended grace to the sick and sinful of ancient Palestine and left a miracle in its wake. And his ministry hasn't ceased. Today, he looks for willing hearts and hands through which he can heal a needy world. Dr. David Stevens knows. His eleven years at Tenwek Hospital in Kenya have shown him more than the drama and sacrifice of missionary medicine. In Jesus, M.D. Dr. Stevens shares the insights he has gained into the character, power, and purposes of the Great Physician and what it means for you to follow in his footsteps.This is more than a book of dramatic, true-life stories. It is an inspiring and challenging invitation to partner with Jesus in his "practice," accompanying him on his rounds to people whose lives he wants to make whole. Discover how to participate with him in bringing his healing touch to your corner of the world. You don't need a medical education--just determination to trust God as your "attending physician," your mentor, you
-Publisher

Through the eyes of a modern medical missionary, who observes and notes everything from Christ's bedside manner to his diagnostic expertise, readers can understand Jesus in ways they have never considered Him before. Readers can experience the tension, risks, and awesome wonder of what God accomplishes in the midst of brokenness and seemingly impossible circumstances.
-Publisher

Stevens is Executive Director of Christian Medical and Dental Society, is a leading spokesman for Christian doctors in America.

Chapter 1 Panga Sunday Panga is the Swahili word for machete. I knew that, and I knew other tribes used the same word, because my wife, Jody, and I had just recently finished six months of Kipsigis (kip-suh-geez) language school and were serving our first term with World Gospel Mission at Tenwek Hospital in the beautiful highlands of the Kericho District in southwestern Kenya. At age thirty, after years of planning, praying, and preparing and after packing up my young family and moving eight thousand miles away from home, I felt excited to have finally begun my life's work as a missionary doctor. I was still very much a rookie, but on this particular Sunday, I happened to be the senior physician on duty at the hospital. The older doctors were gone. Thus, I would be expected to handle---on my own---any emergencies or medical crises that arose. Since I had done my residency in family practice, I felt capable of dealing with the vast majority of routine cases I'd encountered since my arrival at Tenwek just months before. But I confess to feeling a little leery about what surgical emergencies might come in the door during the absence of my more experienced colleagues. That day my worst nightmare came true. Sundays were always different from the normal daily routine. As the doctor on call, I had seen the sickest patients, examined new admissions, and checked the maternity ward for problems. I missed church and got home late for lunch, hoping to catch up on a little correspondence. It was about four o'clock on a sunny afternoon when the call came from the hospital saying we'd just received a trauma patient who needed immediate surgery---something about a panga wound. I sprinted up the hill through the compound to the hospital, arriving at the OR short of breath from the high altitude and totally unprepared for what I saw in front of me. A forty-year-old Kipsigis man, covered in blood, was lying on the operating table. The blow from a machete had caught him across the bridge of his nose and sliced all the way across and through his face, down to the bottom of his jaw. His face had been literally cut in two, with the lower half peeled forward and lying on his chest. The patient was in shock and struggling for breath. Amazed that the man hadn't bled out and died on his way to the hospital, I gave orders to mobilize what we at Tenwek referred to as our 'walking blood bank.' That is, we put out a call for any missionaries or hospital staff on the compound with matching blood type to quickly donate enough blood to save this patient. Meantime, the nurse had started an IV and fluids were running wide open. I ordered a second IV in the other arm as I worked to secure his airway because the patient was in danger of choking to death from blood and his own secretions. The quickest and easiest thing would have been to intubate him, but that would have required placing an endotracheal tube into his throat---right through the middle of his gaping wound. I had no choice but to perform my second emergency tracheostomy ever---no small challenge without proper anesthesia or instruments. I breathed a big sigh of relief once I'd cut open his neck, placed the tube directly into the trachea, and saw the patient immediately begin breathing more easily. As soon as we got the man stabilized, I literally ran from the OR to the doctors' 'office,' a closet-sized room where we kept the hospital's medical library. I didn't even know what to call this type of wound, but it probably wasn't in any index anyway. I grabbed our only orthopedic atlas and hurriedly thumbed through pictures and diagrams searching for something that looked like my patient's case. It was time to do what we often call on the mission field 'a little cookbook surgery.' For some reason American medical texts don't contain much about machete wounds of the face. The closest thing I could find was in an orthopedic text showing a diagram for repairing different types of maxilla (upper jaw) fractures. Le Fort-type fractures are facial injuries that occur most often in automobile accidents where people are smashed into the dash so violently that the maxilla is fractured all the way across their cheekbones. Actually, the textbook diagram I found only showed bones separated less than a quarter of an inch, so they didn't look much like my patient, whose entire face was lying open. The similarity was in the fact that these Le Fort fractures also resulted in a separation of facial bones and required literally pulling those bones (and the face) back together. Deciding this was probably as close an example as I was going to find, I started reading the text even as I rushed back to surgery. By the time I walked into the OR, however, I realized I hadn't found the solution, but merely defined the problem. What good is a cookbook if you lack the ingredients? The first step mentioned in the text was to wire the upper and lower teeth together with 'arch bars.' I had never seen a set of arch bars, let alone applied them. I showed the nurse the picture (she had never seen arch bars either) and sent her to the hospital storage room on the slim chance she could find a set---or at least uncover something else, anything, we might use to make do. Then I propped the text open on a stand beside the operating table and began looking back and forth between my patient and the pictures in the book to decide where and how to start putting this man's face back together. I knew if I didn't, he would certainly die.