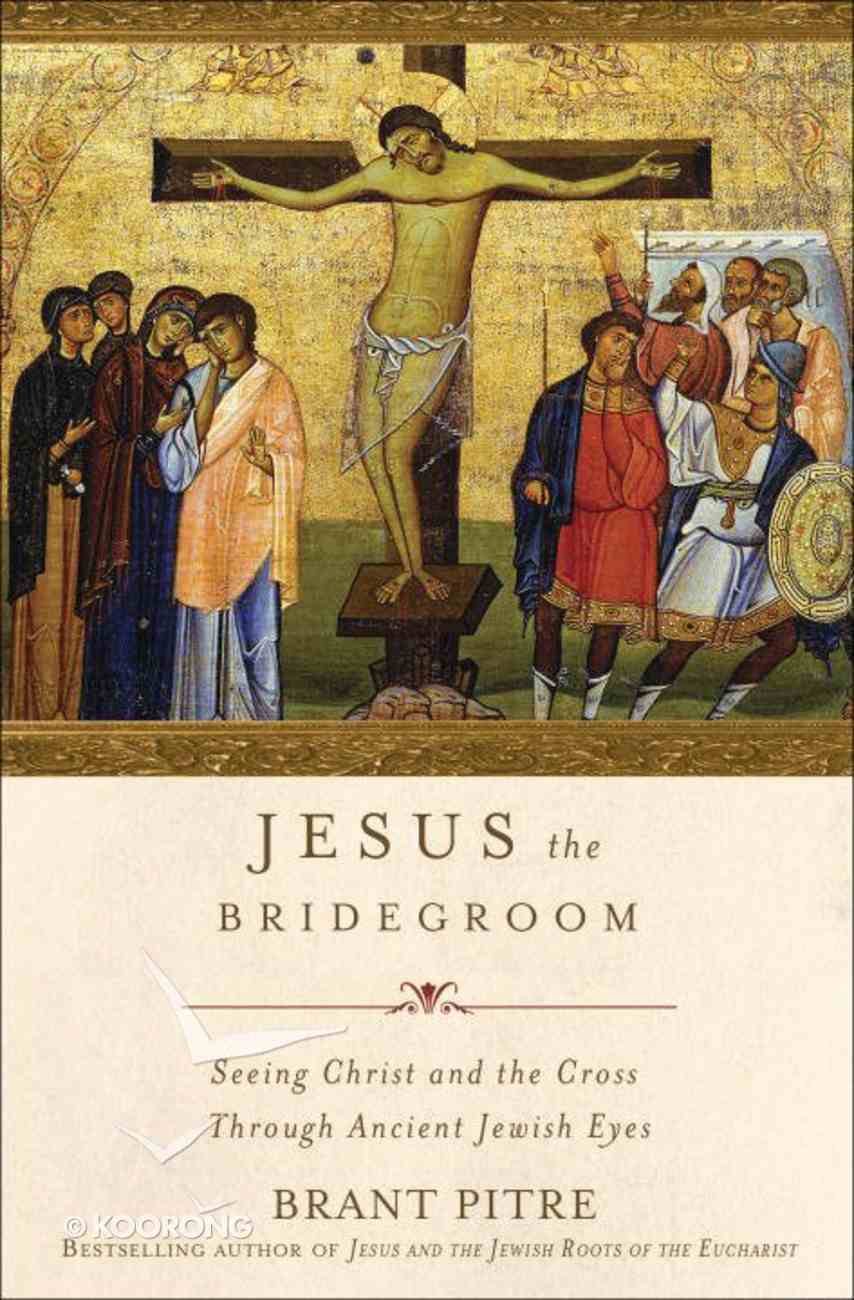 In Jesus the Bridegroom , Brant Pitre once again taps into the wells of Jewish Scripture and tradition, and unlocks the secrets of what is arguably the most well-known symbol of the Christian faith: the cross of Christ. In this...

A Rabbi Looks At Jesus of Nazareth
Jonathan Bernis
Paperback

This Beautiful Book: An Exploration of the Bible's Incredible Story Line and Why It Matters Today
Steve Green, Bill High
Hardback

In Jesus the Bridegroom, Brant Pitre once again taps into the wells of Jewish Scripture and tradition, and unlocks the secrets of what is arguably the most well-known symbol of the Christian faith: the cross of Christ. In this thrilling exploration, Pitre shows how the suffering and death of Jesus was far more than a tragic Roman execution. Instead, the Passion of Christ was the fulfillment of ancient Jewish prophecies of a wedding, when the God of the universe would wed himself to humankind in an everlasting nuptial covenant.

To be sure, most Christians are familiar with the apostle Paul's teaching that Christ is the 'Bridegroom' and the Church is the 'Bride'. But what does this really mean? And what would ever possess Paul to compare the death of Christ to the love of a husband for his wife? If you would have been at the Crucifixion, with Jesus hanging there dying, is that how you would have described it? How could a first-century Jew like Paul, who knew how brutal Roman crucifixions were, have ever compared the execution of Jesus to a wedding? And why does he refer to this as the "great mystery" (Ephesians 5:32)?

As Pitre shows, the key to unlocking this mystery can be found by going back to Jewish Scripture and tradition and seeing the entire history of salvation, from Mount Sinai to Mount Calvary, as a divine love story between Creator and creature, between God and Israel, between Christ and his bride--a story that comes to its climax on the wood of a Roman cross.

In the pages of Jesus the Bridegroom, dozens of familiar passages in the Bible--the Exodus, the Song of Songs, the Wedding at Cana, the Woman at the Well, the Last Supper, the Crucifixion, and even the Second Coming at the End of Time--are suddenly transformed before our eyes. Indeed, when seen in the light of Jewish Scripture and tradition, the life of Christ is nothing less than the greatest love story ever told.
-Publisher

Brant Pitre (Ph.D., University of Notre Dame) is Donum Dei Professor of Word and Sacrament at Our Lady of Holy Cross College in New Orleans, Louisiana. He holds an M.T.S. in biblical studies and theology from Vanderbilt Divinity School.

What do you see when you look at a crucifix? Different people see different things. Do you see the brutal execution of an ancient Jewish man at the hands of the Roman authorities? Or the unjust punishment of a great teacher, who was tragically misunderstood by the leaders of his day? Do you see the martyrdom of the Jewish Messiah, who was killed for claiming to be &ldquo;the king of the Jews&rdquo;? Or the sacrifice of the divine Son of God, who willingly took upon himself the sins of the world?

In the first century A.D., the apostle Paul &mdash; a former disciple of the Jewish rabbi Gamaliel &mdash; saw all of these things. But he also saw something more in the crucifixion of Jesus of Nazareth. Paul saw &#160;the love of a bridegroom for his bride. In one of the most famous (and controversial) &#160;passages he ever penned, the apostle describes the passion and death of Jesus in terms of the love of a husband for his wife. Speaking to husbands and wives in the church at Ephesus, Paul writes these words:
&#160;
Wives, submit to your husbands, &#160;as to the Lord. For the hus- band is the head of the wife as Christ is the head of the church his body, and is himself its Savior. As the church submits to Christ, so let wives also submit in everything to their husbands. Husbands, love your wives, as &#160;Christ loved &#160;the church &#160;and gave himself up for her, that he might sanctify her, having cleansed her by the washing &#160;of water with the word, that he might present the church to himself in splendor, without &#160;spot or wrinkle &#160;or any such thing, that she might be holy and without &#160;blemish. . . . &ldquo;For this reason a man shall leave his father and mother and be joined to his wife, and the two shall become one.&rdquo; This is a great mystery, and I mean in reference to Christ and the church. (Ephesians 5:21&ndash;27, 32)
&#160;
Now, I realize that many readers &#160;may be thinking: &ldquo;Wives &#160;do what?!&rdquo; Why does Paul tell wives to &ldquo;submit&rdquo; to their husbands? And why do husbands apparently get off so easy, with the simple command to &ldquo;love&rdquo; their wives? Is Paul some kind of apostolic chauvinist? What in the world does he mean when he says such things?
&#160;
I promise to get to that later on in the book. Before we can, however, we first need to focus our attention on what lies be- hind these controversial words: Paul&rsquo;s description of Christ as a bridegroom, the Church as his bride, and the crucifixion of Jesus as the kind of ancient Jewish wedding day on which he &ldquo;loved&rdquo; her and &ldquo;gave himself &rdquo; for her. Indeed, as we will see later on, when Paul refers to the Church being &ldquo;washed&rdquo; and &ldquo;presented&rdquo; to Christ, he is describing the ancient Jewish &#160;bridal bath and wedding ceremony. From Paul&rsquo;s point of view, the torture and crucifixion of Jesus on Calvary was nothing less than an expres- sion of spousal love.
&#160;
What are we to make of this mysterious analogy? To be sure, most Christians are familiar &#160;with the idea that Christ is &ldquo;the Bridegroom&rdquo; and the the Church is &ldquo;the Bride.&rdquo; But what does this really mean? And what would ever possess Paul to think of such a comparison? If you had been there at the foot of the bloody cross, with Jesus &#160;hanging there dying, is that how you would have described what was happening? How could a first- century Jew &#160;like Paul, who knew how horribly brutal Roman crucifixions were, have ever compared the execution of Jesus to the marriage between a bridegroom and his bride? Is this just an elegant metaphor? If so, why then does Paul refer to it as a &ldquo;great mystery&rdquo; (Greek mysterion mega) (Ephesians &#160;5:32)?
&#160;
As I hope to show in this book, it is precisely because Paul was Jewish that he saw the passion of Christ in this way. It is precisely because Paul knew Jewish &#160;Scripture and tradition that he was able to see the crucifixion of Jesus of Nazareth as more than just a Roman execution, an unjust martyrdom, or even the sacrifice of the Son of God. Because of his Jewish background, Paul saw the passion and death of Christ as the fulfillment of the God of Israel&rsquo;s eternal plan to wed himself to humankind in an everlast- ing marital covenant. As we will see in this book, from an ancient Jewish perspective, in its deepest mystery, all of salvation history is in fact a divine love story between Creator and creature, between God and Israel, a story that comes to its climax on the bloody wood of a Roman cross.

In order for us to see all of this, however, we will have to go &ldquo;back in time&rdquo; to the first century A.D. and take off our modern &ldquo;eyeglasses&rdquo; and try to see both the love of God and the pas- sion of Jesus the way the apostle Paul and other ancient Chris- tians saw them &mdash; through ancient Jewish eyes. In other words, we will have to go back and reread the accounts of the life, death, and resurrection of Jesus in light of ancient Jewish Scripture and tradition.

When we do this, we will discover that Paul is not the only person who talked this way. In the early stages of Jesus&rsquo; ministry, John the Baptist &mdash; another first-century Jew &mdash; refers to Jesus as &ldquo;the Bridegroom&rdquo; (John 3:29), even though Jesus has no wife. Later on, in one of his most mysterious parables, Jesus refers to himself as &ldquo;the bridegroom,&rdquo; and calls his disciples &ldquo;the sons of the bridechamber&rdquo; (Mark 2:18&ndash;19). Moreover, the very first mir- acle Jesus &#160;performs takes place at a Jewish &#160;wedding, when he acts like a bridegroom by miraculously providing wine for the wedding party (John 2:1&ndash;11). Most striking of all, the last days of Jesus&rsquo; life &mdash; the Last Supper, the passion, and his crucifixion and death &mdash; when examined through the lens of ancient Jew- ish Scripture and tradition, look mysteriously &#160;similar to certain aspects of an ancient Jewish wedding. According to the book of Revelation (written by yet another Jewish Christian), the world itself ends with a wedding: the eternal &ldquo;marriage supper of the Lamb&rdquo; and the unveiling of the new Jerusalem as the Bride of Christ (Revelation 19, 21).

In other words, when seen through ancient Jewish eyes, Jesus of Nazareth was more than just a teacher, or a prophet, or even the Messiah; he was the bridegroom God of Israel come in the flesh. As the Bridegroom Messiah, his mission was not just to teach the truth, or proclaim the kingdom, but to forgive the sinful bride of God and unite himself to her in an everlasting covenant of love. In the words of the Catechism of the Catholic Church:
&#160;The Son of God, by becoming incarnate and giving his life, has united to himself in a certain way all mankind saved by him. . . . The entire Christian life bears the mark of the spousal love of Christ and the Church. (CCC 1612, 1617)
&#160;
So, if you&rsquo;ve ever found yourself puzzled by the words of the apostle Paul, or if you&rsquo;ve ever wondered exactly what it means to say that Christ is &ldquo;the Bridegroom&rdquo; and the Church is his &ldquo;bride,&rdquo; or if you&rsquo;ve just wanted to understand better who Jesus was and why he was crucified, then I invite you to come along on this journey of discovery.

As we will see, by looking at the love of God and the passion of Christ through the lens of the Bridegroom Messiah, we can transform not only the way we see Jesus and his death, but also how we understand baptism, the Lord&rsquo;s Supper, marriage, virgin- ity, and even the end of the world. While many a man through- out history has jokingly described his wedding day as his funeral, Jesus of Nazareth is the only man who ever solemnly described his funeral as his wedding day. This book explains why, and what it means for who he was, why he lived, and why he died on the cross.

Before we can begin to see Jesus differently, however, we first have to go back to the beginning of the love story, and try to see God differently, through ancient Jewish eyes.
&#160;