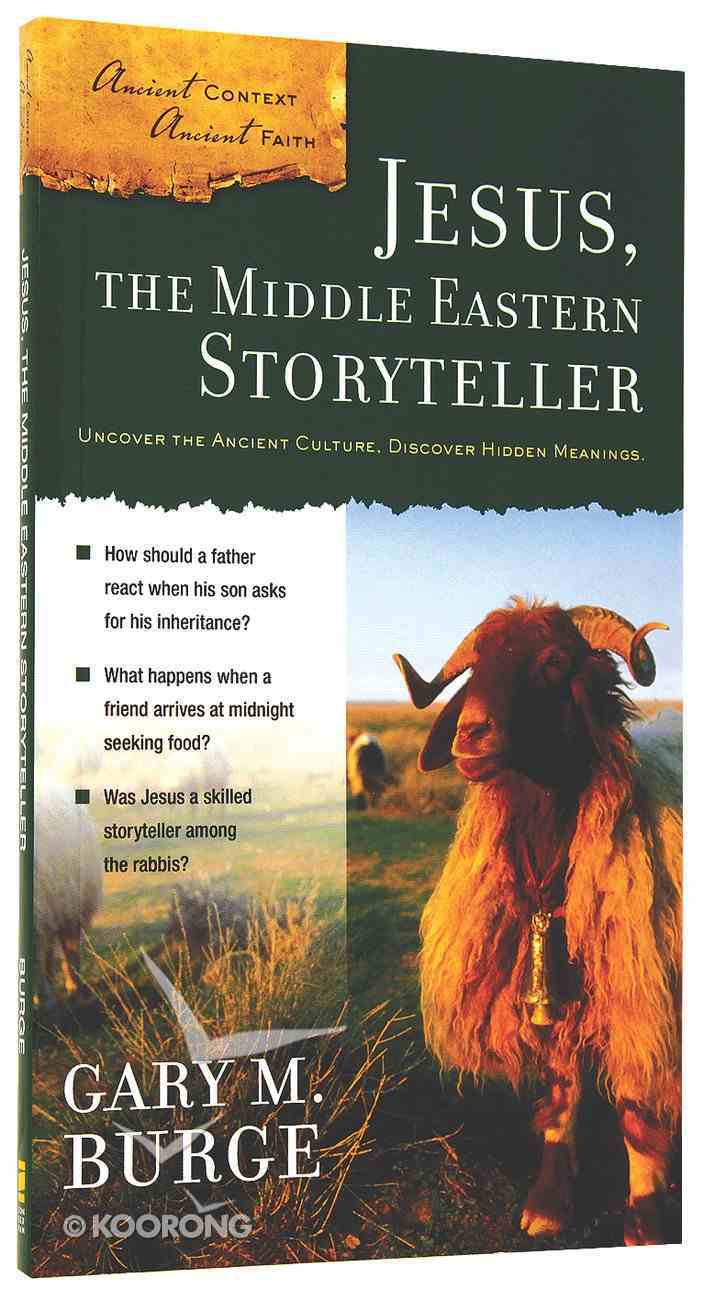 Jesus, the Middle-Eastern Storyteller offers all Christians a rare glimpse into the world of Jesus and provides insights into his parables that make them come alive like never before. Using biblical scholarship, cultural anthropology, and Middle Eastern tradition, Gary M....

Jesus, the Middle-Eastern Storyteller offers all Christians a rare glimpse into the world of Jesus and provides insights into his parables that make them come alive like never before. Using biblical scholarship, cultural anthropology, and Middle Eastern tradition, Gary M. Burge invites us to re-read the parables as if we were in the first century.
^^^As the early church moved away from the original cultural setting of the Bible and found its home in the west, Christians lost touch with the ancient world of the Bible. Cultural habits, the particulars of landscape, even the biblical languages soon were unknown. And the cost was enormous: Christians began reading the Bible as foreigners and missing the original images and ideas that shaped a biblical worldview. The Bible and the Land, by New Testament scholar Gary M. Burge, launches a multi-volume series that explores how the culture of the biblical world is presupposed in story after story of the Bible. Using cultural anthropology, ancient literary sources, and a selective use of modern Middle Eastern culture, Burge re-opens the ancient biblical story and urges us to look at them through new lenses. Here he explores primary motifs from the biblical landscape geography, water, rock, bread, etc. and applies them to vital stories from the Bible.


In Jesus, the Middle Eastern Storyteller, Burge explains that Jesus lived in a story-telling culture that was completely unlike the modern world. When we imagine Jesus' teaching in his own time and place, we cannot use profiles of teachers from our own setting to understand the nature of his work. Jesus' world was different. Using biblical scholarship, cultural anthropology, and a knowledge of the Middle East's traditions, Gary M. Burge explains the parables like they have been rarely explained before. And he does so to bring new insight to Jesus' view of God and his understanding of the life of discipleship.
-Publisher.


Storytellers made history, and Jesus was the greatest of them all. But how can modern readers know what he actually meant in such iconic parables as the Prodigal Son and the Good Samaritan? Jesus, the Middle Eastern Storyteller combines the readability of a popular novel and the authority of scholarship to uncover the hidden meaning of references too often misinterpreted or left shrouded in mystery. The first volume in the Ancient Context, Ancient Faith series drives to the heart of readers' desire to know the culture behind the Scriptures. Colorful maps, photos, and illustrations enhance the context of the times that shaped Jesus' vivid communication of core truths. This expert guide is an invaluable resource for study groups, teachers, leaders, and inquiring Christians who want to dig deeper and enrich their spiritual life.
-Publisher

Gary M. Burge (Ph.D., King's College, Aberdeen University) has been Professor of New Testament at Wheaton College since 1992. He has a longstanding interest with the literature of John and Palestine (including Evangelical involvement with it).
His publications evidence this The New Testament in Antiquity; Whose Land? Whose Promise? What Christians are not being told about Israel and the Palestinians; Commentary on the Gospel of John (The NIV Application Commentary); Commentary on the Johannine Epistles. (The NIV Application Commentary), Interpreting the Gospel of John (Guides to New Testament Exegesis) and The Anointed Community. The Holy Spirit in the Johannine Tradition. Most recently he has launched a multivolume series Ancient Context, Ancient Faith with the first two volumes The Bible and the Land and Jesus, the Middle-Eastern Storyteller:
-Editorial Review.