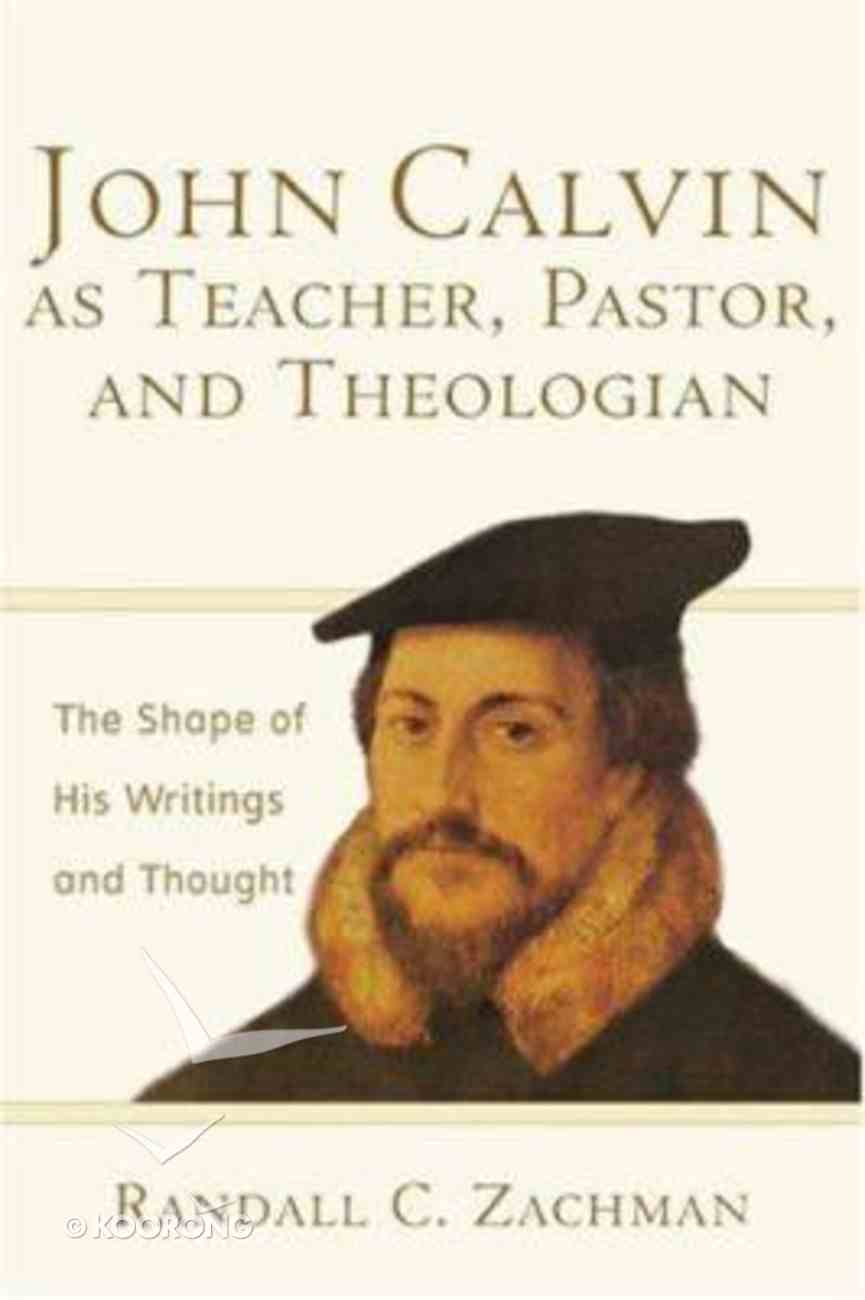 John Calvin has been the subject of numerous studies, but most have focused on one aspect of his thought or a limited selection of his writings. This study of Calvin adopts a uniquely holistic approach. Randall Zachman begins with a...

John Calvin has been the subject of numerous studies, but most have focused on one aspect of his thought or a limited selection of his writings. This study of Calvin adopts a uniquely holistic approach. Randall Zachman begins with a brief biography and considers Calvin's own understanding of his ministry as a teacher and pastor. From this perspective, he surveys Calvin's writings and their place in the work of reforming the church--both through the training of clergy and the instruction of the laity. Zachman then considers Calvin as a theologian. In contrast to Martin Luther, Calvin sought to balance the verbal proclamation of the Word with an emphasis on the visible manifestation of God--both in creation and in Christ. This study will be of great interest to Reformed clergy and to students of the Reformation and Calvinism.
-Publisher

"This is a remarkably fresh and comprehensive study of the ministry and theology of the Genevan reformer, John Calvin. Randall Zachman has read widely in the whole Calvinian corpus as well as among the relevant secondary literature. He also places many of the topics discussed in their historical context, contrasting Calvin's views with other reformers such as Luther and Melanchthon. The result is a very readable treatise that will be of interest not only to Calvin specialists but also to students and pastors. It is a major contribution to Calvin studies."--I. John Hesselink, professor emeritus of theology, Western Theological Seminary"This valuable collection of essays brings together in one volume the fruit of many years of careful study of Calvin. It will be a welcome addition to the libraries of all with a special interest in the reformer."--A. N. S. Lane, professor of historical theology and director of research, London School of Theology"Randall Zachman is fast becoming a premier Calvin interpreter, and this volume shows why. Zachman explores Calvin's calling as teacher and pastor by examining Calvin's concern for godly doctrine and the exposition of Scripture. He also probes Calvin's calling as theologian by showing how Calvin combined hearing the Word of God with actually seeing living images of God--particularly in creation and Christ. Zachman's work expands our perceptions of Calvin's theological work for pastors and ordinary Christians. He leads us to a wider view of the fullness of Calvin's labors and to a deeper appreciation of 'the school of Christ' in which we are all pupils."--Donald K. McKim, editor, The Cambridge Companion to John Calvin and Calvin and the Bible (Cambridge University Press)"Baker Academic is to be congratulated for bringing together this fine collection of Professor Zachman's essays on Calvin. Two new ones have been added, one on catechism and the other a very intriguing comparison/contrast of Luther and Calvin on hearing and seeing revelation. Students of Calvin will be much benefited by having all of these essays easily available in one place where they can so helpfully enhance each other."--Elsie McKee, Archibald Alexander Professor of Reformation Studies and the History of Worship, Princeton Theological Seminary"Randall Zachman brings to this book the kind of bite that makes for excellent intellectual history. Its most distinctive feature is a crisp pattern of organization, using John Calvin's own writings to analyze in a fresh and persuasive way Calvin's work--first as a teacher helping educated men become pastors, next as a pastor helping the laity understand basic Christianity, and finally as a theologian emphasizing the role of imagery in understanding what biblical Christianity is all about. The end result should be a deeper appreciation and a fuller understanding of the man who is the most influential architect of modern Reformed Christianity."--Robert M. Kingdon, professor emeritus of history, University of Wisconsin-Madison
-Publisher

Randall C. Zachman (Ph.D., University of Chicago) is associate professor of Reformation studies at the University of Notre Dame. He is also the author of The Assurance of Faith: Conscience in the Theology of Martin Luther and John Calvin, John Calvin as Teacher, Pastor, and Theologian, and most recently John Calvin and Roman Catholicism: Critique and Engagement, Then and Now.

The Gospel as Taught By Calvin
R C Reed
Paperback