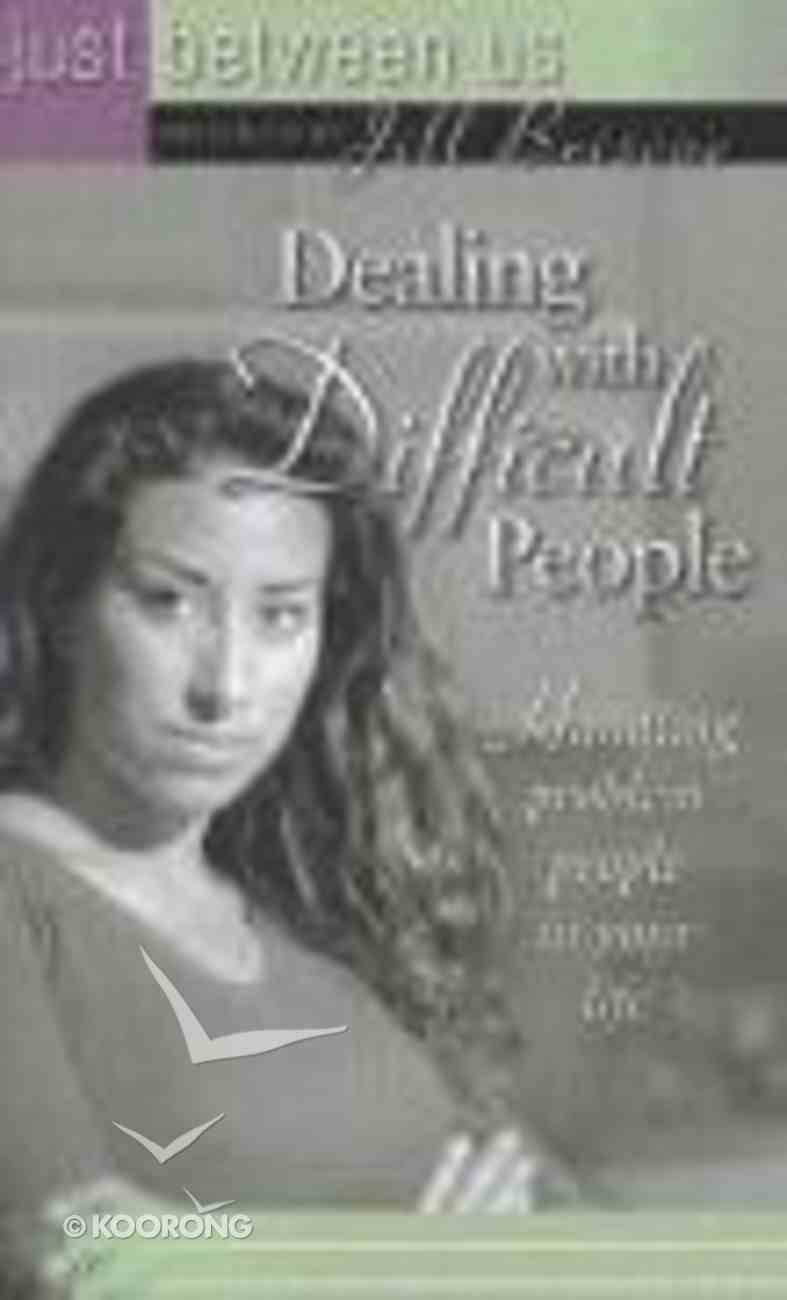 Just Between Us: Dealing With Difficult People

Statistics have shown that most women are discouraged or dealing with depression and in need of resources to help them in developing their leadership skills. This series features the top 10 themes from Just Between Us--a magazine that speaks directly...

Prayers For Difficult Times: When You Don't Know What to Pray (Women's Edition)
Emily Biggers
Paperback

Not the Boss of Us: Putting Overwhelmed in Its Place in a Do-All, Be-All World
Kay Wills Wyma
Paperback

Statistics have shown that most women are discouraged or dealing with depression and in need of resources to help them in developing their leadership skills. This series features the top 10 themes from Just Between Us--a magazine that speaks directly to the current issues that women face--especially those in ministry.
-Publisher

A Note from Jill Briscoe


Shortly after becoming a ministry wife, I found myself in a church meeting where my husband was the object of criticism. He sat there quietly, offering absolutely no defense. "Why doesn't he say something?" I wondered desperately.


After a few more arrows aimed in his direction, I said to myself, "well, if he isn't going to defend himself, I guess that is what a good Christian wife is for."


I rose to my feet, made an impassioned, one-minute speech, burst into tears, and rushed from the auditorium! Since that traumatic event, I have done a little better at handling criticism and difficult people. (That wouldn't be hard, I can hear you say!)


It's difficult when people criticize you, but it's worse when they get after your husband or family. Sometimes church members don't want to confront the pastor, but feel they can pass on their complaints via the pastor's wife because she isn't so intimidating.


Criticism takes on many forms. "He's too deep," says one. "He's too shallow," says the next. "He's too dull. My Kids are bored," confides another. Do they expect you to say, "Oh, I agree, Mrs. Smith? He bores me to pieces too?"


Sometimes when I'm listening to someone criticizing my husband, I think to myself, "Has this person forgotten I'm married to the man? How would she feel if I drew her aside by the coat racks to tell her I felt her husband really should smarten up his appearance?"


How do we handle such encounters with difficult people? Perhaps we leap to our beloved's defense or cut the person off in mid-complaint. I usually feel quite sick or produce a headache within a half hour of such an episode. After thirty years, I still wrestle with the unfairness of it all.


No matter what our position or function in the church body, all of us have to deal with difficult people. It's all Eve's fault!


But it does no good blaming her for the awkward people we have to cope with in our lives and ministry. After all, all we need to do is look in the mirror to see evidence of our own Eve-ness too! So what's the answer in dealing with difficult people? Maybe an acrostic using the word difficult will help.


Investigate what the Bible says about the problem, then apply the truth you learn.


Forgive them for being difficult.


Intercede for them. It's hard to be irritated with someone when you're in the presence of God.


Confront the difficulty and try to talk with them about it. A third party may help to referee if necessary.


Understand "why" the person is behaving like he or she is.


Love them practically. Do something for them they don't deserve.


I hope the chapters in this book will help you as you better deal with the difficult people in your lives. I have to go now as I have an appointment with someone who wants to see me. She says, "She finds me a really difficult person!" Help Lord!


For more information about Just Between Us resources, visit .

The Deborah Anointing: Embracing the Call to Be a Woman of Wisdom and Discernment
Michelle McClain-walters
Paperback