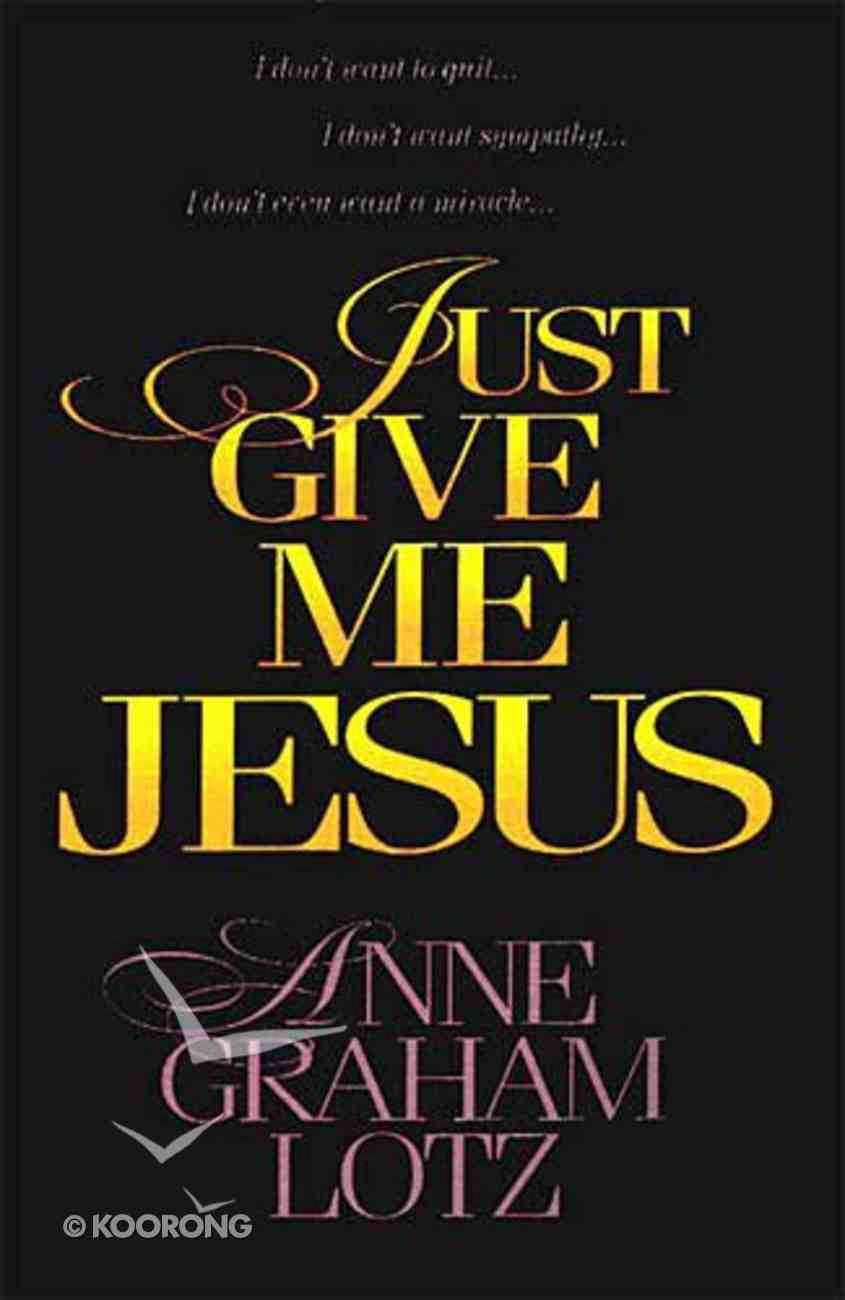 Just Give Me Jesus

To those needing a fresh start, to those still searching for happiness, to those in need of forgiveness, to the suffering and the self-righteous alike, Jesus was, is, and will always be the answer. In this faith-inspiring book, Billy Graham's...

Unavailable. We are unsure when this item will be available to ship. Other edition is available. 9780849920936

The Vision of His Glory
Anne Graham Lotz
eBook

To those needing a fresh start, to those still searching for happiness, to those in need of forgiveness, to the suffering and the self-righteous alike, Jesus was, is, and will always be the answer. In this faith-inspiring book, Billy Graham's daughter shares the realities of life with her Saviour

After two pressure-filled, life-changing years of professional exhaustion and personal turmoil, Anne Graham Lotz found herself with only one heart-cry, "Please, just give me Jesus."In this faith-inspiring book, she stares intently at the realities of life with her Savior.To those needing a fresh start, to those still searching for happiness, to those in need of forgiveness, to the suffering and the self-righteous alike, Jesus was, is, and will always be the answer.
-Publisher

In this faith-inspiring book, the daughter of Billy and Ruth Graham recommends that readers turn to Jesus for a fresh start, happiness, forgiveness, and relief from suffering. Includes a CD featuring Lotz and music from Fernando Ortega.
-Publisher

CHAPTER ONE:Jesus Makes God Visible . . . To MeJohn 1:1-9 Yearsago my mother was invited to a very prestigious dinner party in London,England. The glittering affair included members of the royal family aswell as other aristocrats and leaders from British society. The dinner,softened by candlelight, with the tinkle of silver and the sparkle of crystalaccompanying the sounds of accented conversation, had an ambiance of elegance.The occasion might have been intimidating for someone unaccustomed tosuch a setting, but my mother was as at ease as a queen holding court.Dressed in a simple black gown with a triple strand of pearls around herneck, she looked stylish and sophisticated. Heads turned as people whisperedtheir curious inquiries about who she might be.But my mother was so interested in the other guests at her table shewas oblivious to the small stir she had created. Her expression was notthe duly bored, arrogant look adopted by many of the socially elite. Norwere her words stilted and self-conscious. Instead, her eyes danced withthe joy of life, and her conversation was lively and peppered with questionsas she sought to draw the others at her table into a discussion.As she conversed, Mother discovered that the distinguished-looking oldergentleman seated beside her was the former head of Scotland Yard, GreatBritain's equivalent of the FBI. Fascinated, she respectfully began toprobe him for anecdotes. As he opened up under her genuine interest, herevealed that the departments under his authority had included those forforgery and counterfeiting. When she surmised that he must have spent alot of time studying counterfeit signatures, he corrected her. "On thecontrary, Mrs. Graham. I spent all of my time studying the genuine thing.That way, when I saw a counterfeit, I could immediately detect it."Today, our world is cluttered with lies, deceit, hypocrisy, and fraudat almost every level. From government leaders to salesclerks to airline ticket agentsto restaurant maitre d's to business associatesto secretaries to friendsto neighbors to advertisers, everyone seems to play loose with the truth. This "whatever works is right" attitude has even crept into the Christiancommunity. Too often, we focus on methods instead of missions, programsinstead of prayer, organization instead of inspiration, pragmatism insteadof power. Many preachers preach to be popular, instead of preaching tochange lives. Their sermons are 95 percent their own thoughts and 5 percentGod's truth. And the average church member cannot tell the differencebecause he or she is biblically illiterate!Sadly, this also tends to twist our perception of Who Jesus is. Whilesome have softened and sentimentalized Him until He is barely recognizable,others have distorted and doubted Him until He is undesirable.My mother's dinner partner had unwittingly touched on a very importantprinciple. If you and I want to be able to detect counterfeit Christs andcounterfeit truth, we need to immerse ourselves in the real thing. We needto saturate ourselves in the truth of the Word of God. This applies toour faith in general, as well as to our understanding of Jesus.Who is Jesus? He lived two thousand years ago, in an obscuretown, in an obscure country, during a relatively dark period in human historythat was dominated by the Roman Empire. Yet He stands unequaled and unparalleledin the phenomenal greatness of His life as well as in the stunning impactHe has had on history.As we turn the corner into a new millennium and gaze back at the lasttwo thousand years, a handful of individuals seem to rise up from our historypages-individuals whose lives or words or accomplishments impacted theentire human race, for good or for bad. Names like Julius Caesar, MartinLuther, Muhammad, Christopher Columbus, Orville and W
-Publisher