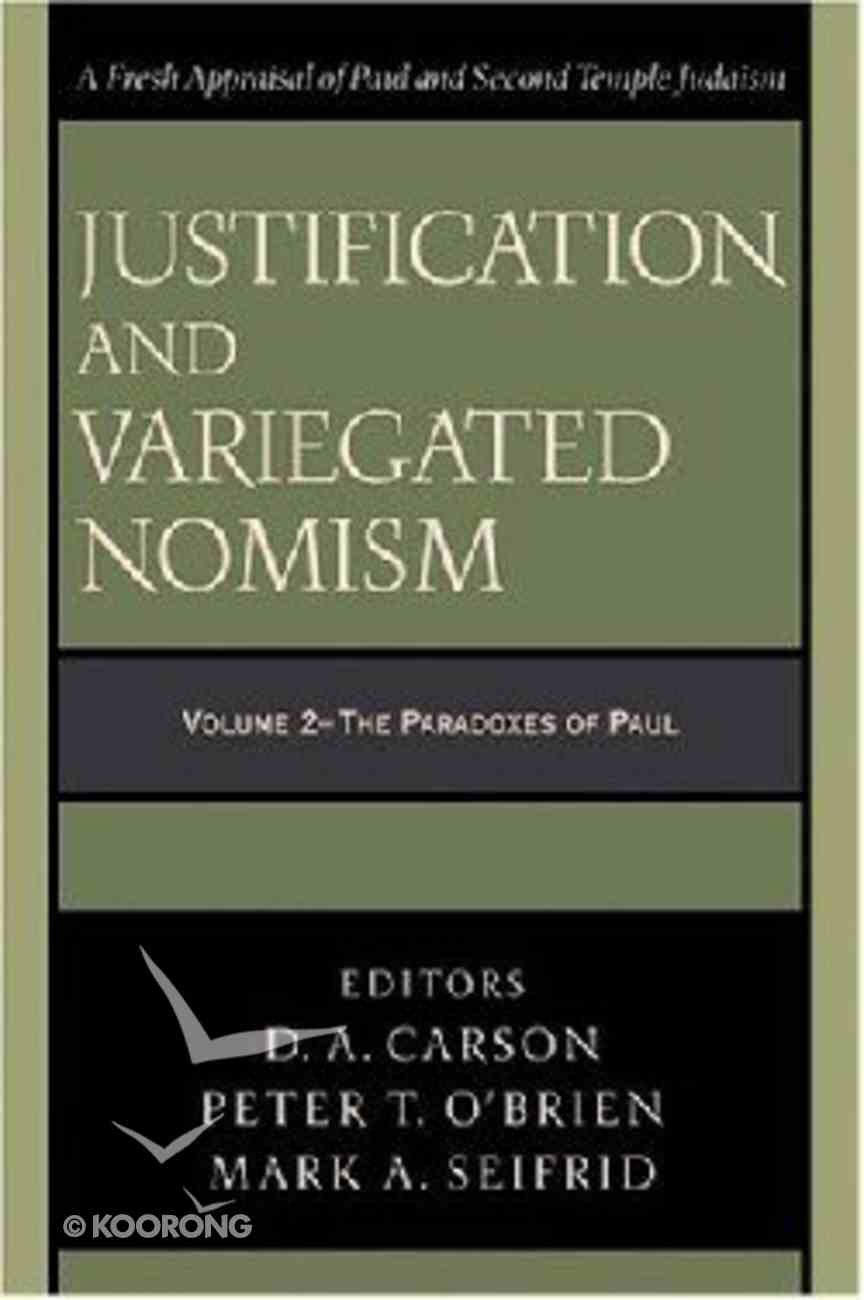 Deficiencies in the Justification of the Ungodly
Manny Alaniz
eBook

Justified in Christ: God's Plan For Us in Justification
K Scott Oliphint
Paperback

A comprehension of Paul's understanding of the law and justification has been a perennial problem for historians and theologians. In light of new studies on early Judaism, an international group of esteemed New Testament scholars evaluates the paradoxes of Paul in this second volume of "Justification and Variegated Nomism." Contributors include Martin Hengel, Douglas J. Moo, Timothy George, and Stephen Westerholm.
-Publisher

"In this book, twelve internationally noted scholars weigh in on the covenantal nomism of Second Temple Judaism first championed by E. P. Sanders. Together with the first volume of 'Justification and Variegated Nomism,' 'The Paradoxes of Paul' has now become the definitive conversation partner, if not at times sparring partner, with the multifaceted approach known as the new perspective on Paul. The selections are incisively rich, provocatively rewarding, and well worth the read."--David P. Moessner, professor of biblical theology, University of Dubuque Theological Seminary
-Publisher

Peter O'Brien (Ph.D., University of Manchester) is senior research fellow in New Testament, at Moore Theological College, Sydney, Australia. Dr O'Brien is an erudite scholar much akin to his dokvater Prof. Bruce, balancing exegetical precision, theological balance with pastoral warmth, this is especially evident in his four major commentaries The Epistle to the Philippians (The New International Greek Testament Commentary); The Letter to the Hebrews and The Letter to the Ephesians (both in the Pillar Commentary Series) and Colossians and Philemon (Word Biblical Commentary revised edition with Clinton Arnold)
Koorong -Editorial Review.

Mark A. Seifrid (Ph.D., Princeton Theological Seminary) is the Mildred and Ernest Hogan Professor of New Testament Interpretation at Southern Baptist Theological Seminary, Wilmore, KY. Before joining the Southern faculty, Dr. Seifrid served as Visiting Lecturer at Wheaton College and at Trinity Evangelical Divinity School. Along with several articles, he is the author of Justification by Faith: The Origin and Development of a Central Pauline, Christ Our Righteousness and co-editor of two volumes with Peter T. O'Brien and D.A Carson Justification and Variegated Nomism: The Complexities of Second Temple Judaism and Justification and Variegated Nomism: The Paradoxes of Paul. He is a member of the Society of New Testament Studies and the Society of Biblical Literature. He previously served as a campus minister with the Navigators at the University of Michigan and the University of Illinois.

What's So Important About the Cross
Derek Prince
Paperback

The Truth of the Cross
R C Sproul
Hardback