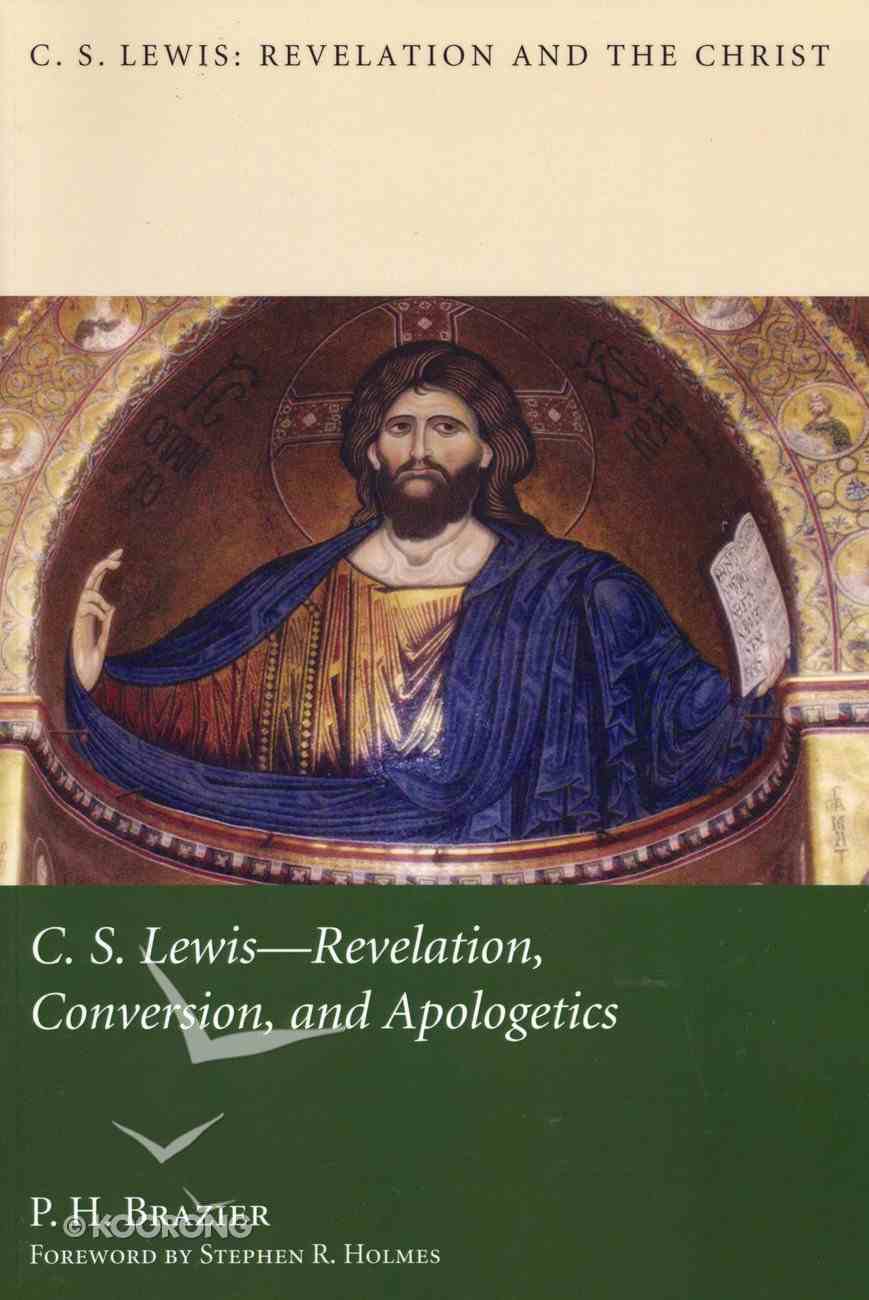 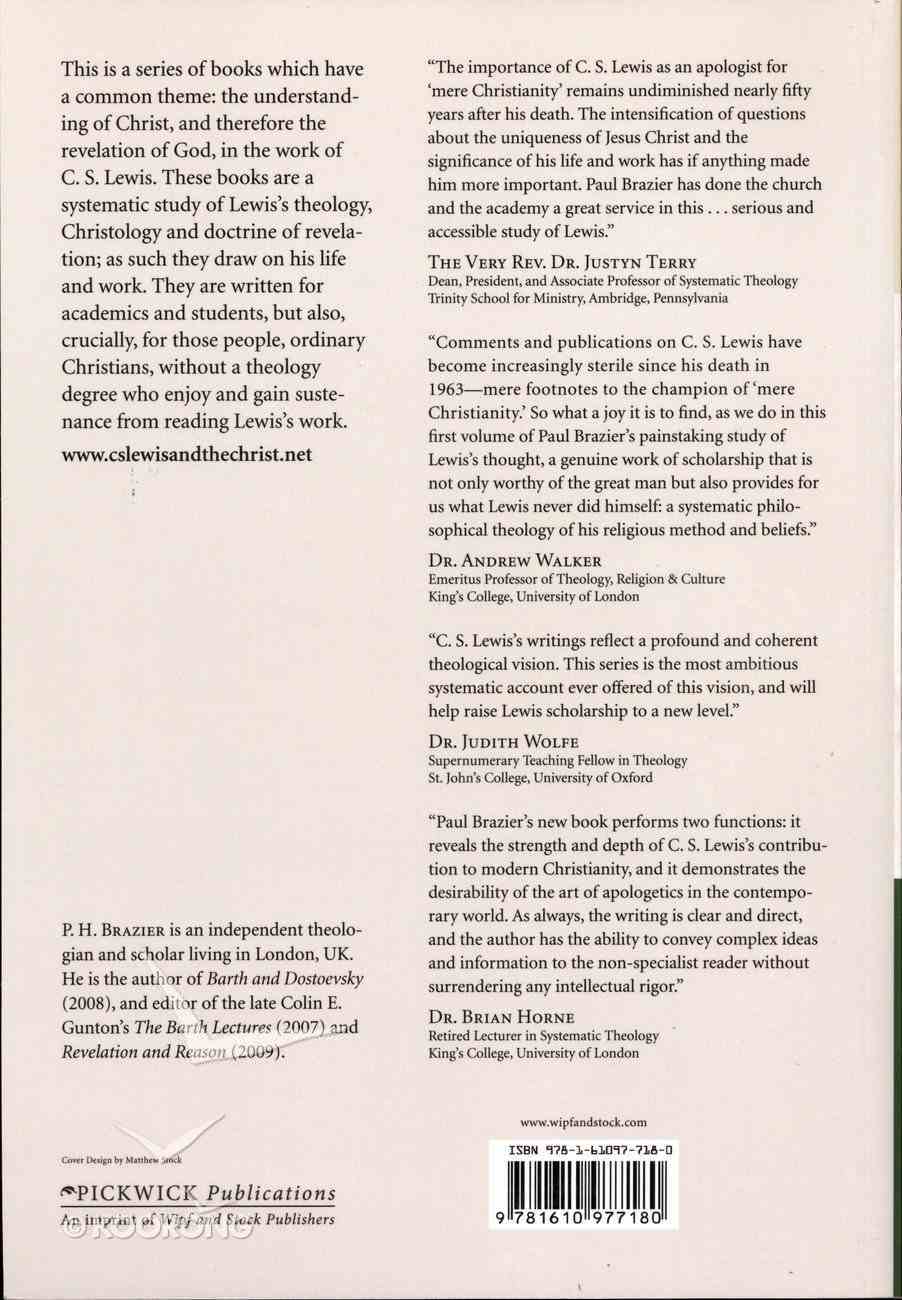 Synopsis: This is a series of books which have a common theme: the understanding of Christ, and therefore the revelation of God, in the work of C. S. Lewis. These books are a systematic study of Lewis's theology, Christology and...

Synopsis: This is a series of books which have a common theme: the understanding of Christ, and therefore the revelation of God, in the work of C. S. Lewis. These books are a systematic study of Lewis's theology, Christology and doctrine of revelation; as such they draw on his life and work. They are written for academics and students, but also, crucially, for those people, ordinary Christians, without a theology degree who enjoy and gain sustenance from reading Lewis's work. Endorsements: "The importance of C. S. Lewis as an apologist for 'mere Christianity' remains undiminished nearly fifty years after his death. The intensification of questions about the uniqueness of Jesus Christ and the significance of his life and work has if anything made him more important. Paul Brazier has done the church and the academy a great service in this ...serious and accessible study of Lewis." --The Very Rev. Dr. Justyn Terry Dean, President, and Associate Professor of Systematic Theology Trinity School for Ministry, Ambridge, Pennsylvania "Comments and publications on C. S. Lewis have become increasingly sterile since his death in 1963--mere footnotes to the champion of 'mere Christianity.' So what a joy it is to find, as we do in this first volume of Paul Brazier's painstaking study of Lewis's thought, a genuine work of scholarship that is not only worthy of the great man but also provides for us what Lewis never did himself: a systematic philosophical theology of his religious method and beliefs." --Dr. Andrew Walker Emeritus Professor of Theology, Religion & Culture King's College, University of London "C. S. Lewis's writings reflect a profound and coherent theological vision. This series is the most ambitious systematic account ever offered of this vision, and will help raise Lewis scholarship to a new level." --Dr. Judith Wolfe Supernumerary Teaching Fellow in Theology St. John's College, University of Oxford "Paul Brazier's new book performs two functions: it reveals the strength and depth of C. S. Lewis's contribution to modern Christianity, and it demonstrates the desirability of the art of apologetics in the contemporary world. As always, the writing is clear and direct, and the author has the ability to convey complex ideas and information to the non-specialist reader without surrendering any intellectual rigor." --Dr. Brian Horne Retired Lecturer in Systematic Theology King's College, University of London "Serious investigations into the theology of C. S. Lewis have been long in coming...[T]he fact that Lewis was not a professional theologian has led to him being overlooked by those who were most able to engage critically and creatively with his writings. Fortunately ...a new generation of scholars has taken up the task. Paul Brazier's latest contribution to this is a most welcomed accomplishment that will leave an indelible impression on our understanding of-and appreciation for-Lewis' remarkable theological contributions." --Dr. Grayson Carter Associate Professor of Church History Fuller Theological Seminary, Pasadena, California Editor of Sehnsucht: The C. S. Lewis Journal "In this rigorous and searching study of the theology of C. S. Lewis, Paul Brazier locates Lewis within the wider context of theological scholarship and shows him to be a theologian to be reckoned with in his own right, rather than simply a popularizer of Christian faith. This most welcome volume in a proposed three-volume series will surely prove invaluable in the assessment of Lewis's legacy." --Dr. Murray Rae Professor and Head of the Department of Theology and Religion University of Otago, New Zealand Author Biography: P. H Brazier is an independent theologian and scholar living in London, UK. He is the author of Barth and Dostoevsky (2008), and editor of the late Colin E. Gunton's The Barth Lectures (2007) and Revelation and Reason (2009).
-Publisher

Paul Brazier holds a degree in Fine Art, in Education and also Theology; a teacher for 20 years. He recently completed a PhD on Barth, Thurneysen and Dostoevsky (Paternoster 2007). He is the editor of Colin E. Gunton's The Barth Lectures (2007) and The Revelation and Reason Seminars (2008).