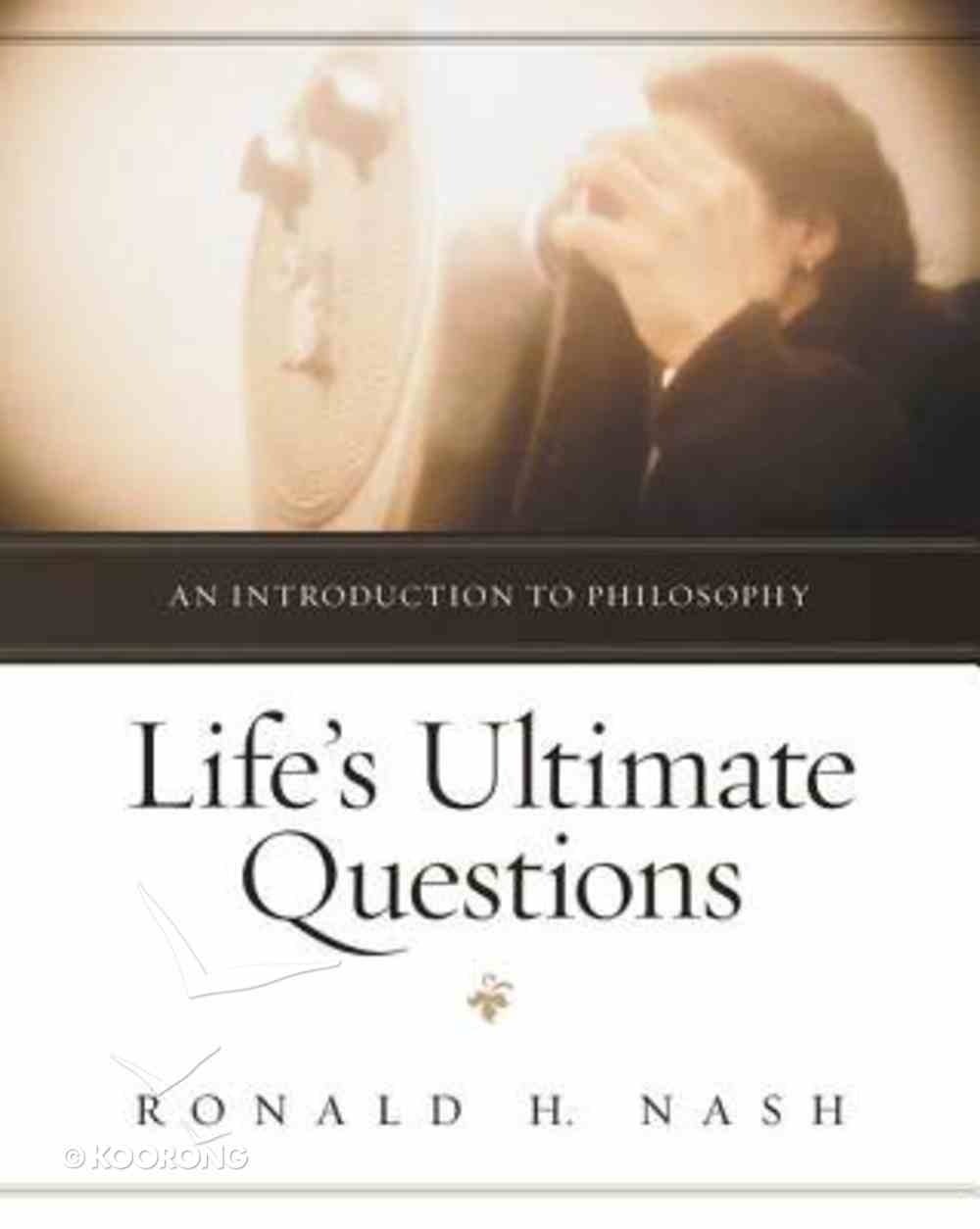 136 Questions: About God's Word and His World
Malcolm Dunjey
Paperback

How Do We Know?: An Introduction to Epistemology
James K Dew, Mark W Foreman
Paperback

Ronald H. Nash (PhD, Syracuse University) was professor of philosophy at Southern Baptist Theological Seminary in Louisville, Kentucky. He was the author of numerous books, including The Concept of God, Faith and Reason,Is Jesus the Only Savior? and When a Baby Dies.

Preface I took my first philosophy course during my senior year in college. When I left the classroom after those first sixty minutes, I said, 'Wow! Where has this stuff been all my life?' I decided to stay for another year to complete a philosophy major before beginning graduate studies at Brown University. I taught my first philosophy class in 1957, and I've been teaching the subject ever since: forty-one years and still kicking. I estimate I have taught more than fifteen thousand students at the bachelor's, master's, and doctor's levels. During many of those forty-one years, I had difficulty finding a satisfactory textbook for my Introduction to Philosophy courses. All of the books I examined and many that I used seemed to have been written not for students but for a relatively small group of philosophers. Now that it's finished, this book is the kind of text I wish I'd had when I began teaching. This book represents a synthesis of three distinct approaches: a section that deals with important philosophical problems and issues; another section dealing with six major systems in the history of philosophy; and a section that relates approaches in the first two sections to worldview thinking. This book differs from other beginning texts in the emphasis it gives to the notion of a worldview. I have written this book with several kinds of readers in view: the college and seminary students who will be using the book as a text; their professors, who will use it as a teaching tool; and readers outside of any academic community who want to know more about philosophy and its relevance for their lives and their own worldview. I had at least five objectives in writing this book: --- To show that many of life's problems can be illuminated by philosophy. In fairness, I must also admit that some philosophers produce more darkness than light on the subjects they discuss. --- To help students think more clearly about the problems and philosophers discussed in this book. --- To introduce readers to several important philosophical tools, including logic and ways of developing an argument. --- To introduce readers to examples of conceptual analysis. Many centuries ago, Socrates noted how often human arguments contain an implicit appeal to some concept or term that few people seemed able to define. Twenty-five hundred years of philosophy have not diluted the wisdom of Socrates' judgment. --- To introduce readers to worldview thinking. Conceptual analysis deals with individual ideas or concepts. Sooner or later we have to combine separate concepts into patterns of thought that this book calls worldviews. Chapter 1 introduces the reader to the idea of a worldview, to the importance of worldviews, and to their place in philosophy. It also serves as an introduction to the book. One of the more important things that a study of philosophy ought to do is acquaint the reader with the role that worldviews play in every person's thought and conduct. I want readers to advance their understanding of their own worldview. I would like to think that by the time readers have finished the book, their worldview will have undergone some changes and will be better because of those changes. I trust many readers will have eliminated inconsistent or inadequate beliefs from their worldviews. In chapter 1, I introduce some of the elements of any reasonably complete worldview and discuss the tests by which we can evaluate these beliefs. One such test is the law of non-contradiction, a topic I cover in chapter 8. Part 1 of the book covers six important systems from the history of philosophy. The content of part 1 is significant for several reasons. For one thing, knowing the fundamental ideas of thinkers like Plato, Aristotle, Augustine, and Aquinas used to be a vital part of what it meant to be an educated person. Moreover, the study of these six systems will enable us to tap into formative discussions of life's ultimate questions at different stages of their development. Why, many will ask, are the conceptual systems of no philosophers after Aquinas included? For one thing, this is not a textbook in the history of philosophy. I would like to think that many of my readers will want some day to take a history course that will introduce them to the systems of Descartes, Spinoza, Leibniz, Locke, Berkeley, Hume, Kant, Hegel, and others. This book is intended for beginners. There will be plenty of opportunities later in life to explore the intricacies of modern and contemporary philosophy. Moreover, part 2 of this book covers a number of issues that have gained prominence in recent centuries and that owe much to the work of modern and contemporary philosophers. Who can complain about my decision to include the systems of Plato, Aristotle, Augustine, and Aquinas in part 1? I added the system of Plotinus because it marks a brilliant synthesis of the work of Plato and Aristotle and also because it played a major role in the development of the systems of Augustine and Aquinas. Only someone unfamiliar with the importance of Plotinus would object. Then, to provide balance and to close a major gap, I included the materialistic and naturalistic beliefs of such ancient thinkers as Democritus, Epicurus, and Lucretius. Part 1 begins with the chapter on naturalism because most of the core beliefs of ancient naturalism were opposed by Plato and Aristotle. Naturalism continues to be an influential worldview, even though many of its modern formulations appear to be more sophisticated than the ancient opinions I examine.