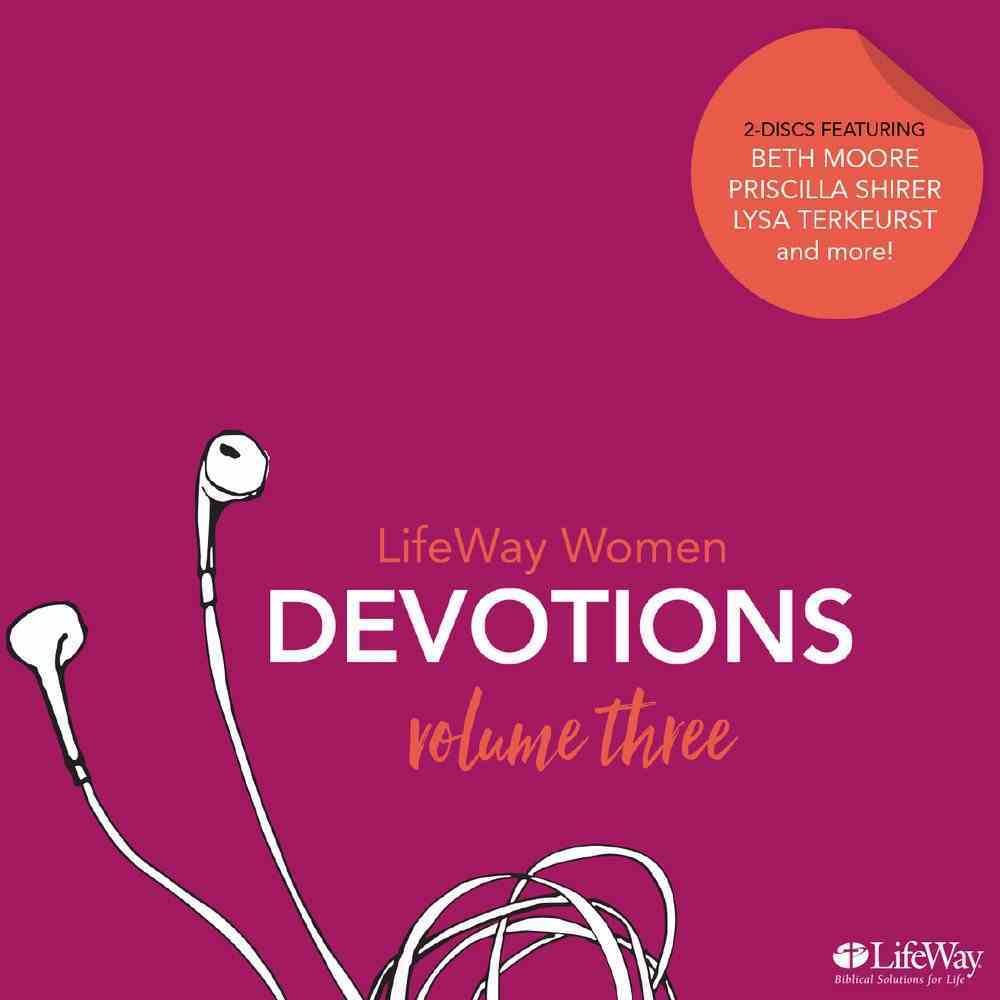 Awaken: 90 Days With the God Who Speaks
Priscilla Shirer
Paperback

:
LifeWay Women Devotional CD Volume 3
This 2-disc audio CD set from various LifeWay Women authors and Bible studies includes twelve devotional segments from the original studies and teaching. Each drive-time devotion is approximately 10-12 minutes in length. Use these audio devotions to grow closer to God when you drive to and from work, to pick up the kids, or to give as a gift! This CD includes inspiring Scripture-based lessons that will offer you encouragement for your daily routine.

Track 1
From Lisa Harper // The Gospel of Mark: The Jesus We're Aching For
The Unlikely Catalyst of Unbelief (12:04)
Dive into Mark 9 and The Mount of Transfiguration. In this teaching we discover that what God promised in the Old Testament is perfectly fulfilled by Jesus in the New Testament.

Track 2
From Jen Wilkin // 1 Peter: A Living Hope in Christ
The Triune Nature of God (10:03)
1 Peter 1:1-12 speaks of our inheritance through Christ. Because of Jesus' sacrifice on the cross, we have a living hope in Him and an inheritance that is imperishable, undefiled, and unfading.

Track 3
From Beth Moore // Entrusted: A Study of 2 Timothy
The Gospel and the Gifting (10:06)
This devotional offers us a glimpse into Paul's first letter to Timothy and establishes the concept of Entrusted and our challenge to carry the gospel.

Track 4
From Lauren Chandler // Steadfast Love: A Study of Psalm 107
The Desert (10:20)
God is working something in the desert, plucking false anchors, filling wells, tilling the soil of our hearts to receive seeds to bear fruit. Let Him do His work, but do not neglect to cry out for His help. We aren't meant for the desert forever. He has a way out.

Track 5
From Jennifer Rothschild // Hosea: Unfailing Love Changes Everything
When You Say "I Do" to I AM (9:46)
Why would a man like Hosea marry a woman like Gomer? Why would God chose to love us? We learn that God is love and it is His love that makes us all loveable. We have a new identity when we remember His Word and His promises.

Track 6
From Nicki Koziarz // A Woman Who Doesn't Quit: 5 Habits from the Book of Ruth
Move Forward in Faith (6:20)
Review the five habits of a woman who doesn't quit and reminds us how Ruth and Naomi remained strong and faithful to see the victory of God in their lives.

Track 1
From Kelly Minter // All Things New: A Study on 2 Corinthians
Rethinking Generosity (10:53)
Kelly shares truths about biblical generosity. Focused on the grace of God, we discover that only God can make overflowing joy and extreme poverty equally rich in generosity.

Track 2
From Angela Thomas-Pharr // Redeemed: Grace to Live Every Day Better than Before
Redeemed for Freedom (10:42)
The moment we are redeemed the chains of sin are broken. Even so, we often don't throw them down but hang on to them. This devotion reminds us that everyone who calls on the name of Jesus Christ will be saved. Jesus alone can break the chains.

Track 4
From Jennie Allen // Proven: Where Christ's Abundance Meets Our Great Need
Rest: The End of Striving (13:18)
Why are you tired? Are you carrying burdens in your family, with your children, or ministry that weigh down your soul? Jesus shows us another way. God does not move because of us, but in spite of us.

Track 5
From Angie Smith // Seamless: Understanding the Bible as One Complete Story
The Kingdoms and the Prophets (12:05)
Kingdoms unite and divide. The same thing happened among God's people the Israelites with their prophets, priests, and kings. Remember the reign of King David, the building of the temple, and more on the background of our Savior, Jesus Christ.

Angie Smithis the wife of Todd Smith (lead singer of Dove Award winning group Selah) and author of the popular blog entitled Bring the Rain. She holds a Masters degree in Developmental Psychology from Vanderbilt University and lives with her husband and daughters in Nashville, Tennessee.

Jen Wilkin is a speaker, writer, and teacher of women's Bible studies. During her seventeen years of teaching, she has organized and led studies for women in home, church, and parachurch contexts. Jen and her family are members of the Village Church in Flower Mound, Texas.

Lauren is the author of Steadfast Love and Goodbye to Goodbyes. She's also a singer/songwriter, and her albums include The Narrow Place. Lauren is married to Matt, the Lead Pastor of Teaching at The Village Church, Flower Mound, Texas, and is mother to Audrey, Reid, and Norah.

Jennifer Rothschild, speaker, author, and recording artist, captivates audiences with her storytelling and signature wit as she travels across the country challenging her listeners to walk by faith, not by sight. Rothschild is cofounder of WomensMinistry.NET and lives in Springfield, Missouri, with her husband, Philip, and their sons, Clayton and Connor.

Jennie Allen is the founder and visionary behind IF:Gathering, an organization that equips women to know God more deeply and to disciple others in their own lives. Through simulcasts and live events, IF has reached more than one million women in nearly two hundred countries and has seven thousand women leading in-person gatherings around the world. A popular podcaster and sought-after speaker, Jennie has taught at Women of Faith, Catalyst, Q Conference, and Send (North American Mission Board), as well as some of the largest churches in North America. She is the author of several books and study guides, including Restless, Anything, and Nothing to Prove. Jennie has a master's degree in biblical studies from Dallas Theological Seminary. She and her husband, Zac, live in Dallas, Texas, with their children.