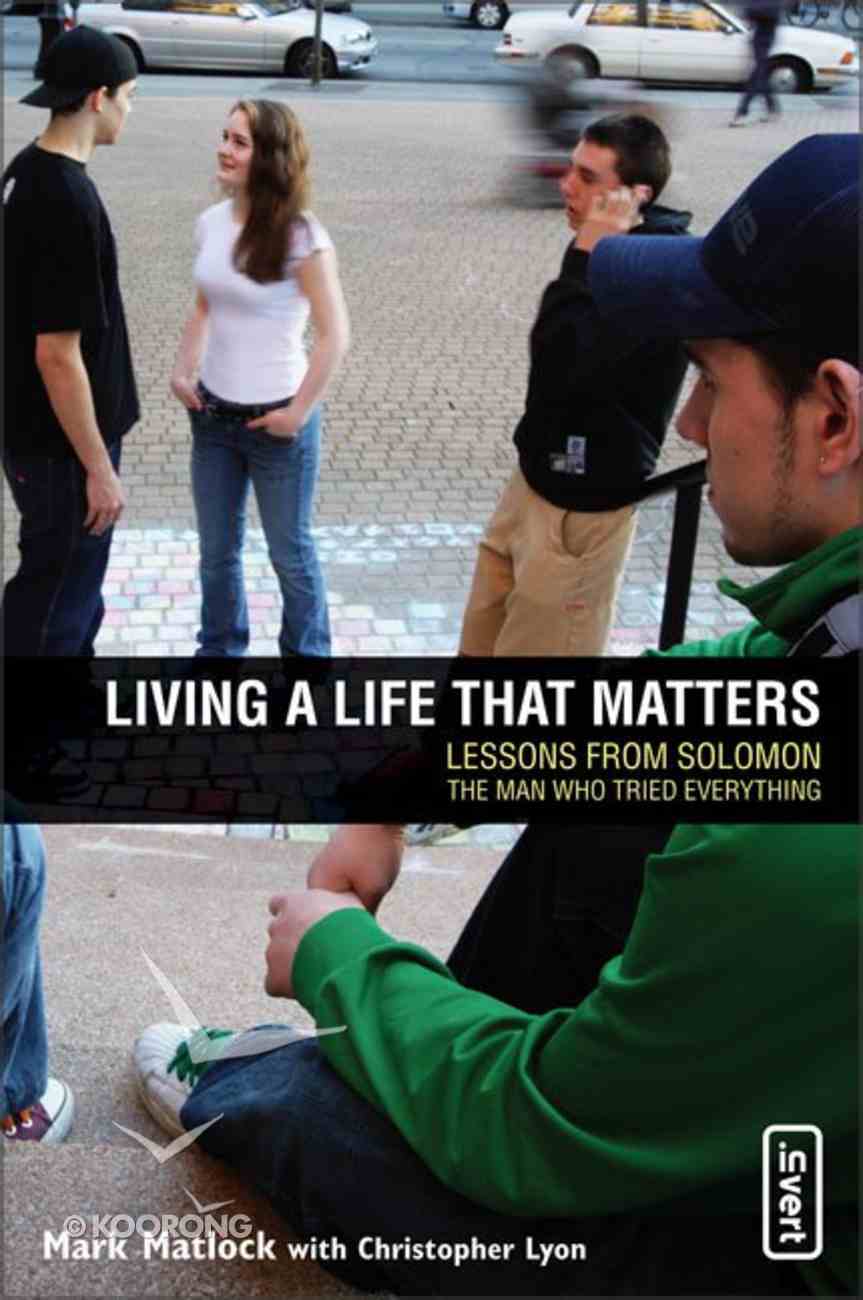 Living a Life That Matters

FILL IN THE BLANK: MY LIFE WOULD BE MEANINGFUL IF__________________.People have all kinds of ways to fill in that blank. Some want more money. Some moreinfluence. Others more pleasure. The point is we want MORE. But is that enough? Doesdevouring...

Wisdom on ... Getting Along With Parents (Invert Series)
Mark Matlock
Paperback

What Does God Want From Me?
Mark Matlock
eBook

Wisdom on ... Getting Along With Parents (Invert Series)
Mark Matlock
eBook

Let's Be Real: Living Life as An Open and Honest You
Natasha Bure, Sadie Robertson
Paperback

FILL IN THE BLANK: MY LIFE WOULD BE MEANINGFUL IF__________________.People have all kinds of ways to fill in that blank. Some want more money. Some moreinfluence. Others more pleasure. The point is we want MORE. But is that enough? Doesdevouring everything the world has to offer lead to satisfaction?In the Bible, the book of Ecclesiastes describes someone who tried to answer thatquestion. Whether it was sex, drugs, money, power, food, relationships, or knowledge, King Solomon of Israel tried it all--and documented what he discovered in his search forpurpose in his life.Living a Life That Matters lets you gaze over Solomon's shoulder as he indulges everypleasure, exercises every power, and emerges with a radical conclusion about how to live. You'll find ways that his search for meaning connects with yours and how your story can connect with your friends' as they seek meaning in the world.
-Publisher

Living a Life that Matters: Lessons from Solomon - the man who tried everythingCopyright 2005 by Youth SpecialtiesYouth Specialties Products, 300 South Pierce Street, El Cajon, CA 92020, arepublished by Zondervan, 5300 Patterson Avenue SE, Grand Rapids, MI 49530Unless otherwise indicated, all Scripture quotations are taken from the HolyBible: New International Version (North American Edition). Copyright 1973,1978, 1984 by International Bible Society. Used by permission of Zondervan.All rights reserved. No part of this publication may be reproduced, stored ina retrieval system, or transmitted in any form or by any means-electronic,mechanical, photocopy, recording, or any other-except for brief quotations inprinted reviews, without the prior permission of the publisher.Web site addresses listed in this book were current at the time of publication.Please contact Youth Specialties via e-mail (YS@YouthSpecialties.com) to reportURLs that are no longer operational and replacement URLs if available.Editorial direction by Randy SouthernEdited by Sharon OdegaardProofread by Anna Hammond and Heather HaggertyCover design by BurnkitInterior design by SharpSeven DesignPrinted in the United States of America05 06 07 08 09 10 / DCI / 10 9 8 7 6 5 4 3 2 1TOO MUCH IS NEVER ENOUGHWhat if you could have it all?Money. Power. Love. Sex. Respect. Popularity.Absolutely anything you want. Many of us spendour lives wishing for that very scenario-or at leastimagining what it would be like. But not many ofus get there.Mel Gibson got there.Once an unknown Australian actor, Gibson gothis fi rst big break starring in the cult classic Mad Maxwhen he was twenty-three. More big roles followedin blockbusters such as the Lethal Weapon series,Maverick, Ransom, Conspiracy Theory, Payback,What Women Want and Signs. As his internationalstardom grew, so did his bank account. He is nowone of the top-paid actors in the world. For everymovie he stars in, he now gets $25 million.But acting wasn''t enough for him. In 1993 hestepped behind the camera to direct The Man Withouta Face. Two years later he earned two AcademyAwards for directing and producing Braveheart.Gibson''s success didn''t stop with his career. He''s been marriedto the same woman for 25 years, and they have seven kidstogether. People magazine named him the Sexiest Man Alive.Premiere magazine listed him as one of the most powerful peoplein Hollywood.Worldwide fame. Unlimited riches. True love. Fatherhood.Widespread respect for his talent. International renown for hissexual appeal. Virtually limitless power in his career. Rarely doesone man get so much in one lifetime.Mel Gibson had it all. So he must have been the happiestman on the planet, right? He had the power to do almost anythinghe wanted. The money to buy almost anything he couldimagine. Almost nothing was out of reach for him.Yet Gibson felt something was missing. All that he had wasn''tenough for him. So he added some new experiences to the mix."I would get addicted to anything," he admits. "Anything at all,okay? Drugs, booze, anything. You name it. Coffee, cigarettes.Sometimes I used to drive inebriated. I mean, this is the height ofcareless stupidity. Done a lot of things I''m not proud of."Eventually Gibson sought treatment for his addictions. Butafter getting clean and sober, he found himself right back wherehe had started: with an emptiness in his life."I just didn''t want to go on."Th at''s what he told Diane Sawyer in an interview on ABC''sPrimetime Live. All of his personal success had brought him to aplace where the most appealing option to him was to jump out awindow and end it all."You know, I was looking down thinking, man, this is justeasier this way," he said. "I don''t know, you have to be mad, youhave to be insane to despair in that way. But that is the height ofspiritual bankruptcy. There''s nothing left."NOTHING WORKSIf Mel Gibson had made that jump-if he''d killed himself at theheight of his success-he would have joined a list of well-kn
-Publisher

Mark Matlock has been working with youth pastors, students, and parentsandnbsp;for more than two decades. He's the Executive director of Youth Specialtiesandnbsp;and founder of WisdomWorks Ministries and PlanetWisdom. He's the authorandnbsp;of several books including The Wisdom On series, Living a Life That Matters,andnbsp;Don't Buy the Lie, and Raising Wise Children. Mark lives in Texas with his wife, Jade, and their two teenageandnbsp;children.

What If?
Kristen Young
Paperback

My Tech-Wise Life: Growing Up and Making Choices in a World of Devices
Amy Crouch, Andy Crouch
Hardback