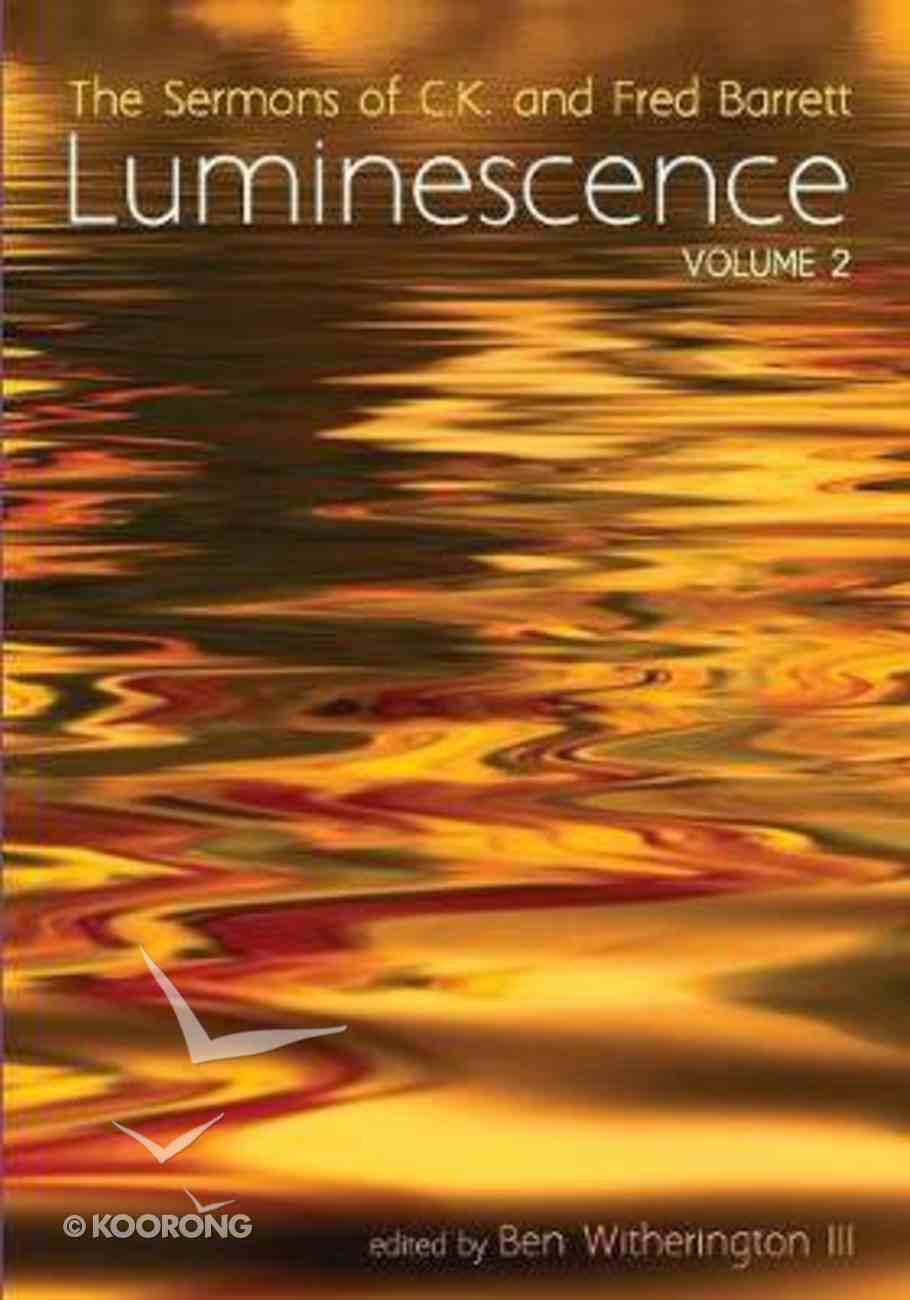 Luminescence: The Sermons of C. K. and Fred Barrett (Vol 2)

What is found in this series, unveils an entirely different side of C.K. Barrett, a side one might never have known about if one had knowledge only of his famous commentaries and monographs. Herein lies a goodly selection of Kingsley's...

What is found in this series, unveils an entirely different side of C.K. Barrett, a side one might never have known about if one had knowledge only of his famous commentaries and monographs. Herein lies a goodly selection of Kingsley's sermons preached largely in small- and medium-sized Methodist churches in the Northeast of England, though often elsewhere in England and around the world. Fred Barrett was not the scholar his son was, but on close inspection, one can most definitely see the impact of the father on the son when it came to preaching.It seems rightto include as many sermons from both of these men as we can in this series. One thing sorely lacking in much preaching these days is in-depth engagement with both the biblical text and one's tradition and theology. The sermons in these volumes demonstrate what such preaching can look like.While the first volume presented sermons on the Gospels and Acts, this second volume covers the rest of the New Testament and extensive portions of the Old Testament. ""I, like generations of preachers, have been tutored by C.K. Barrett, the biblical scholar who helped us into the biblical text by sharing his unending delight in the joys of scripture.But until Ben Witherington, I did not know C.K. Barrett the preacher, even less his father, Fred.In this book of Barrett sermons, Ben Witherington shows why he loves Barrett the preacher and how Barrett's preaching can help us contemporary servants of the word.The sermons are disarmingly fresh, direct, and engaging, demonstrating how the biblical word can speak here and how.What a delightful collection of great biblical preaching."" --Will Willimon, Professor of the Practice of Christian Ministry, Duke Divinity School; United Methodist Bishop, retired ""C.K. Barrett's sermons are the gospel in miniature. Wearing his scholarship lightly, Barrett confronts us here first and foremost with the person of Jesus.In simple, pithy prose, he subverts comfortable piety and conventional religion by evoking the disturbing voice of Jesus, and then leads us beyond that bracing encounter into the limitless love of God. These down-to-earth reflections are both personal and profoundly theological, and they stand the test of time. Barrett was a brilliant communicator of the gospel in the Methodist chapels of County Durham, but these selected sermons have the capacity to speak powerfully to many contexts today."" --John Barclay, Lightfoot Professor of Biblical Studies, Durham University, England ""It was rather daunting to be C.K. Barrett's successor. Our local church in Nottingham had been Methodist and so it was appropriate for another Methodist to succeed Barrett in a Theology Department whose other professors had traditionally been Anglicans and Canons of the Cathedral next door to the Department. Initially my wife and I bypassed our nearest Methodist chapel in North Road on Sundays because two New Testament Professors in the congregation might be somewhat intimidating for local (lay) preachers. But we soon realized that we need have no concerns on that front, since Kingsley was away everySundaypreaching elsewhere in the region, with local stewards more than willing to come and pick him up each time, since he didn't drive.In my own preaching round Methodist chapels in the region, a typical warmly appreciative remark would refer to Mr. Barrett who taught somewhere in 'the college in Durham.' One of my favourite memories was of an exceptional occasion when he took the service in North Road and began by holding up a piece of mechanism, which, he explained, came from his wife Margaret's washing machine. He wryly noted Margaret's comment that 'We need a little man' (to mend the machine), and added, 'Apparently I was not ""a little man.""' No indeed! He was a great man, the leading New Testament scholar in the United Kingdom, and high within the top ten in the world. Daunting, yes; but what an honour!"" --James D. G. Dunn, EmeritusLightfoot Professor of Div
-Publisher

Fred Barrett grew up in Kenmore, New York, and has lived in Portland, Oregon, for many years. He has two children and three grandchildren. Fred enjoys movies, musicals, his workshop, vegetable gardening, and sports (especially football), as well as reading, volunteering, exercising at the gym, and most of all, writing. This is his fifth book".