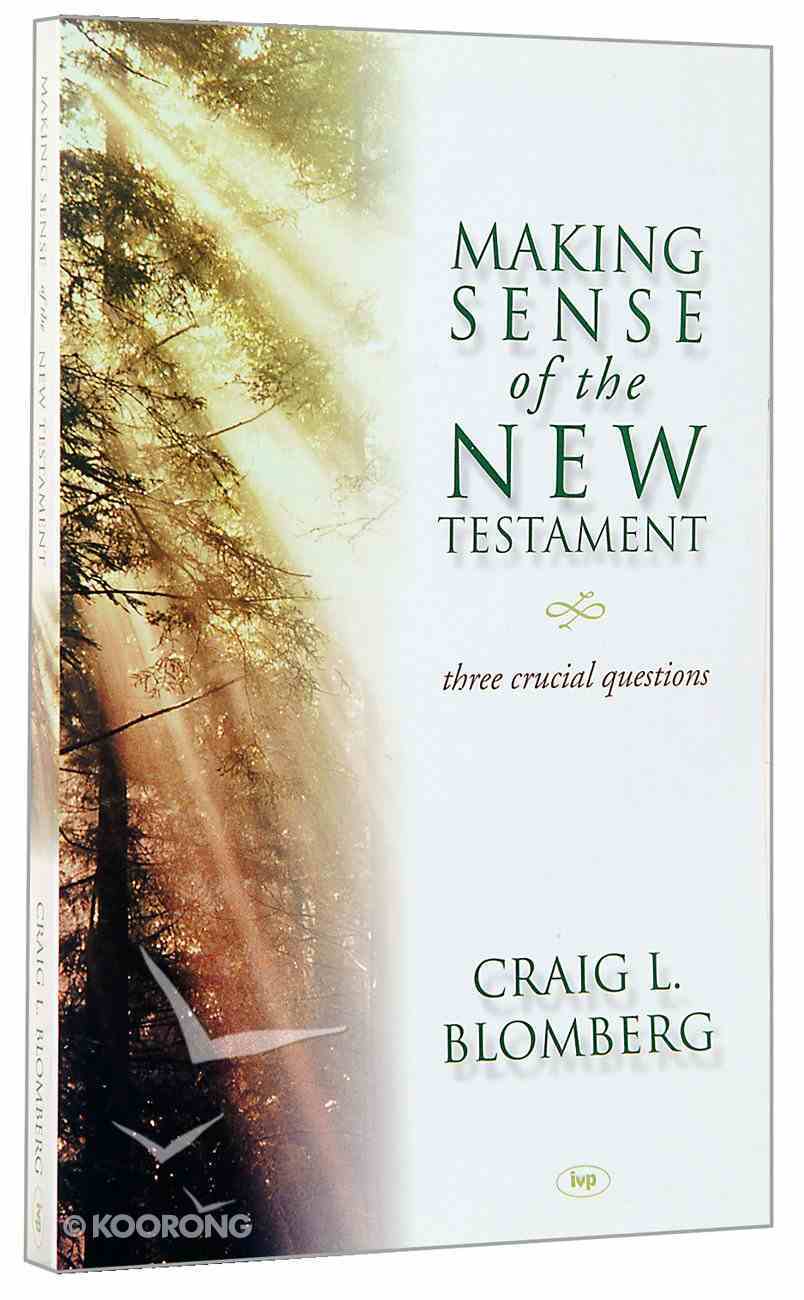 Making Sense of the New Testament

From the introduction Arguably the most controversial aspect of the life of Christ during the past two hundred years, since the rise of modern biblical scholarship, is whether or not the New Testament's portraits of Jesus of Nazareth can...

Arguably the most controversial aspect of the life of Christ during the past two hundred years, since the rise of modern biblical scholarship, is whether or not the New Testament's portraits of Jesus of Nazareth can be trusted. There are opaque portions of the Gospels, to be sure, but any reasonably literate person with a good translation of the Bible can quickly recognize that Matthew, Mark, Luke, and John all believed Jesus to be much more than a great teacher, a Jewish rabbi, and a controversial first-century prophet. They believed he was also Israel's long-awaited Messiah or liberator, a divinely sent messenger, even God incarnate. From these convictions came a crucial corollary - all humanity would one day be judged based on their response to this Jesus. His followers could look forward to a new age, inaugurated already in his lifetime but consummated only when he would return from heaven to reign on earth. Christians, as those followers later came to be called, would then experience an eternity of unending happiness in the company of God and each other, while those who rejected Jesus and the New Testament's message about him would spend an eternity separated from God and all things good.

One's assessment of the New Testament's claims about Jesus, from this perspective, is thus the most important issue a person can ever face in this life, despite our world's cultures that would replace it with dozens of other allegedly more pressing concerns. But this line of reasoning presupposes that at least the basic contours of the Bible's portrait of Christ are trustworthy. If Jesus did not make the kinds of claims for himself that the New Testament presents, then we may relegate him to a lesser role in the history of humanity and get on with facing more urgent, current events. One of the three crucial questions for this book to address, therefore, must involve the historical reliability of the New Testament. Or, to phrase the question more precisely, do the apparently historical portions of the New Testament in fact communicate trustworthy history? This means that we must particularly scrutinize the Gospels and Acts, which purportedly provide biographies of Jesus and a history of the first generation of Christianity, respectively. But there are autobiographical reflections in Paul's letters that will have to be considered as well, along with more indirect evidence bearing on questions of history in all the New Testament letters and even in the Book of Revelation.

A closely related crucial question redirects our primary attention from Jesus to Paul. Even if the basic picture of Jesus that the New Testament paints proves trustworthy, his message often sounds quite different from that of the first century's greatest missionary preacher, the apostle Paul. Churches in many times and places throughout Christian history have devoted far more attention to Paul than to Jesus as they have tried to encapsulate the gospel message. Can we reconcile the teaching of these two formative figures? Or did Paul so distort Jesus' message that we must choose one over the other? Was Paul, in fact, the second founder, or perhaps even the true founder of Christianity as it has developed down through the centuries? Our second crucial question must therefore address the continuity and discontinuity between Jesus and Paul as they are depicted in the New Testament. Is it a case of "Jesus versus Paul" or can the two be seen as complementing each other, while still maintaining their distinctive qualities? Obviously, we can address this question only after we have a clear understanding of what both men stood for. By the time we have dealt with these two initial crucial questions, then, we will have had to "make sense" of a large portion of the New Testament.

Because interpretation accomplishes little unless it leads to application, the third crucial question will be: How do we apply the New Testament today, especially in cultures far removed in time and space from those of the first-century Mediterranean world in which Jesus and Paul ministered? More precisely, what varying principles emerge for applying the New Testament's diverse literary forms? After all, Jesus' parables are not to be interpreted as straightforward history, nor does narrative material in general yield its lessons in the same way as do more direct commands. And biographies, histories, and letters all differ from apocalyptic literature - the literary genre that the Revelation most closely reflects. What in the world are readers to do today with that collection of visions that at times borders on the bizarre?

The New Testament is the foundation of the Christian church, but some question its historical accuracy. Others have claimed that Paul's teaching differs from that of the Gospels. How can we reconcile the seemingly different messages of Jesus and Paul? What is the relevance of the New Testament in our world today, in cultures far removed by time and space from the first-century Mediterranean world? What principles can we use to make appropriate applications? In Making Sense of the New Testament, Craig Blomberg offers a reasonable, well-informed response to these crucial questions encountered by Bible readers. Grounded in sound scholarship but written in an accessible style, this book offers reliable guidance to pastors, students, and anyone interested in a better understanding of the New Testament.
-Publisher