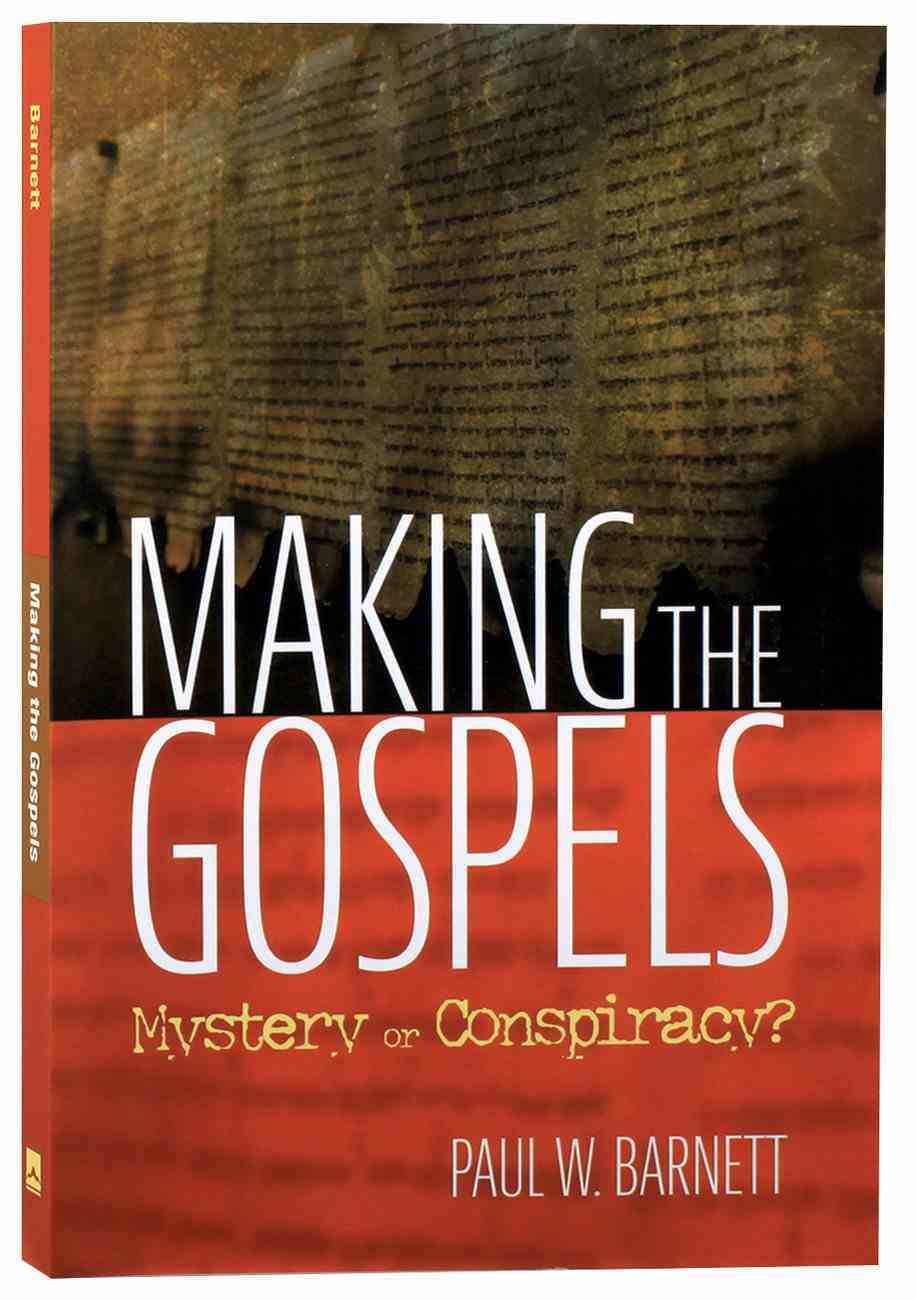 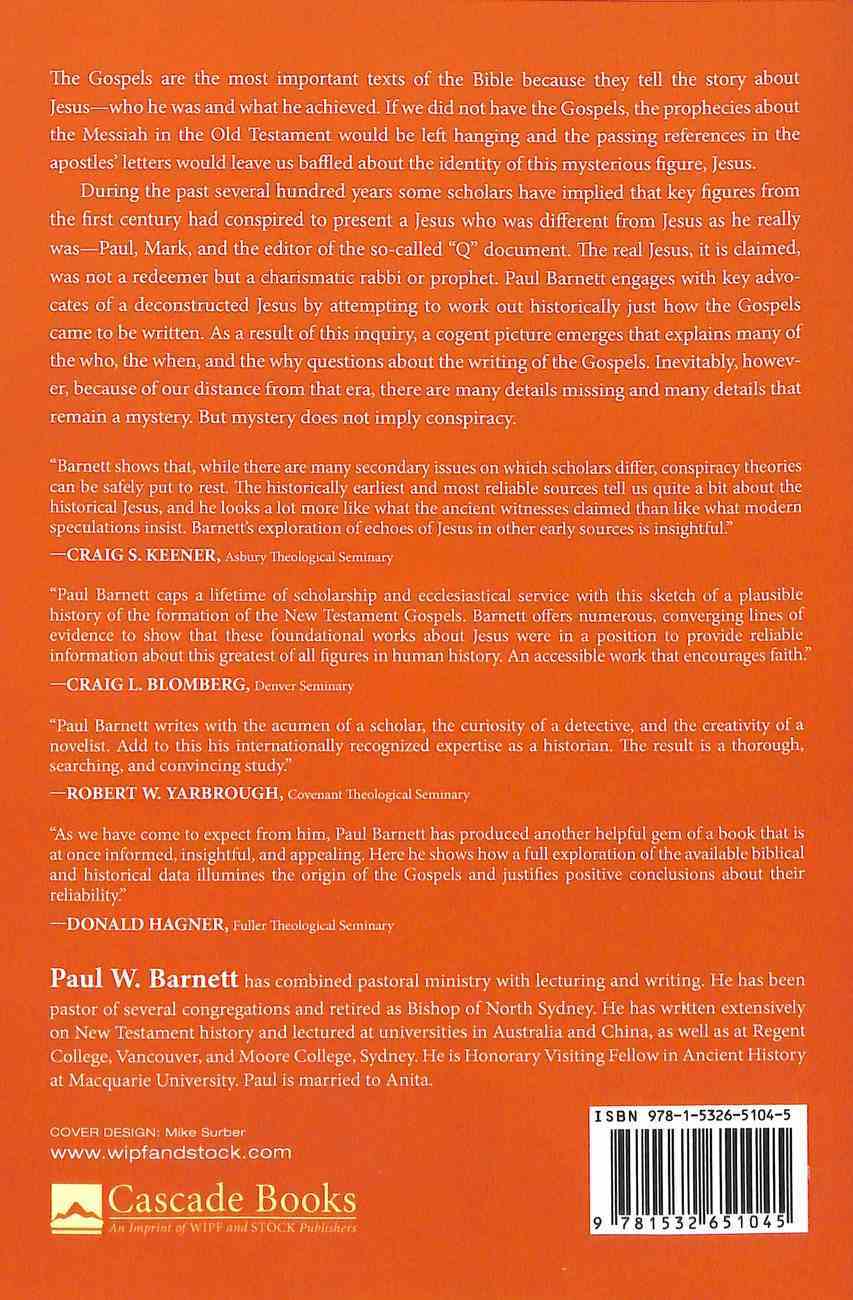 Making the Gospels: Mystery Or Conspiracy?

Some scholars believe that Jesus was merely a charismatic rabbi or prophet. Paul Barnett engages with key advocates of a deconstructed Jesus to determine historically how the Gospels came to be written. A cogent picture has emerged explaining many of...

99 available
Expected to ship on Monday from Australia.
Learn More
Free Shipping
for orders over $99.

A Short Book About Jesus: The Man From Heaven
Paul Barnett
Paperback

The Birth of Christianity, the First Twenty Years (#01 in After Jesus Series)
Paul Barnett
Paperback

Some scholars believe that Jesus was merely a charismatic rabbi or prophet. Paul Barnett engages with key advocates of a deconstructed Jesus to determine historically how the Gospels came to be written. A cogent picture has emerged explaining many of the who, when, and why questions.
- Koorong

The Gospels are the most important texts of the Bible because they tell the story about Jesus - who he was and what he achieved. If we did not have the Gospels, the prophecies about the Messiah in the Old Testament would be left hanging and the passing references in the apostles' letters would leave us baffled about the identity of this mysterious figure, Jesus.

During the past several hundred years some scholars have implied that key figures from the first century had conspired to present a Jesus who was different from Jesus as he really was - Paul, Mark, and the editor of the so-called "Q" document.

The real Jesus, it is claimed, was not a redeemer but a charismatic rabbi or prophet. Paul Barnett engages with key advocates of a deconstructed Jesus by attempting to work out historically just how the Gospels came to be written.

As a result of this inquiry, a cogent picture emerges that explains many of the who, the when, and the why questions about the writing of the Gospels. Inevitably, however, because of our distance from that era, there are many details missing and many details that remain a mystery. But mystery does not imply conspiracy.

"Barnett shows that, while there are many secondary issues on which scholars differ, conspiracy theories can be safely put to rest. The historically earliest and most reliable sources tell us quite a bit about the historical Jesus, and he looks a lot more like what the ancient witnesses claimed than like what modern speculations insist. Barnett's exploration of echoes of Jesus in other early sources is insightful." -- Craig S. Keener, Asbury Theological Seminary

"Paul Barnett caps a lifetime of scholarship and ecclesiastical service with this sketch of a plausible history of the formation of the New Testament Gospels. Barnett offers numerous, converging lines of evidence to show that these foundational works about Jesus were in a position to provide reliable information about this greatest of all figures in human history. An accessible work that encourages faith." -- Craig L. Blomberg, Denver Seminary

"Paul Barnett writes with the acumen of a scholar, the curiosity of a detective, and the creativity of a novelist. Add to this his internationally recognized expertise as a historian. The result is a thorough, searching, and convincing study." -- Robert W. Yarbrough, Covenant Theological Seminary

"As we have come to expect from him, Paul Barnett has produced another helpful gem of a book that is at once informed, insightful, and appealing. Here he shows how a full exploration of the available biblical and historical data illumines the origin of the Gospels and justifies positive conclusions about their reliability." -- Donald Hagner, Fuller Theological Seminary

Paul W. Barnett has combined pastoral ministry with lecturing and writing. He has been pastor of several congregations and retired as Bishop of North Sydney. He has written extensively on New Testament history and lectured at universities in Australia and China, as well as at Regent College, Vancouver, and Moore College, Sydney. He is Honorary Visiting Fellow in Ancient History at Macquarie University. Paul is married to Anita.
-Publisher

The Gospel of the Kingdom
George Eldon Ladd
Paperback