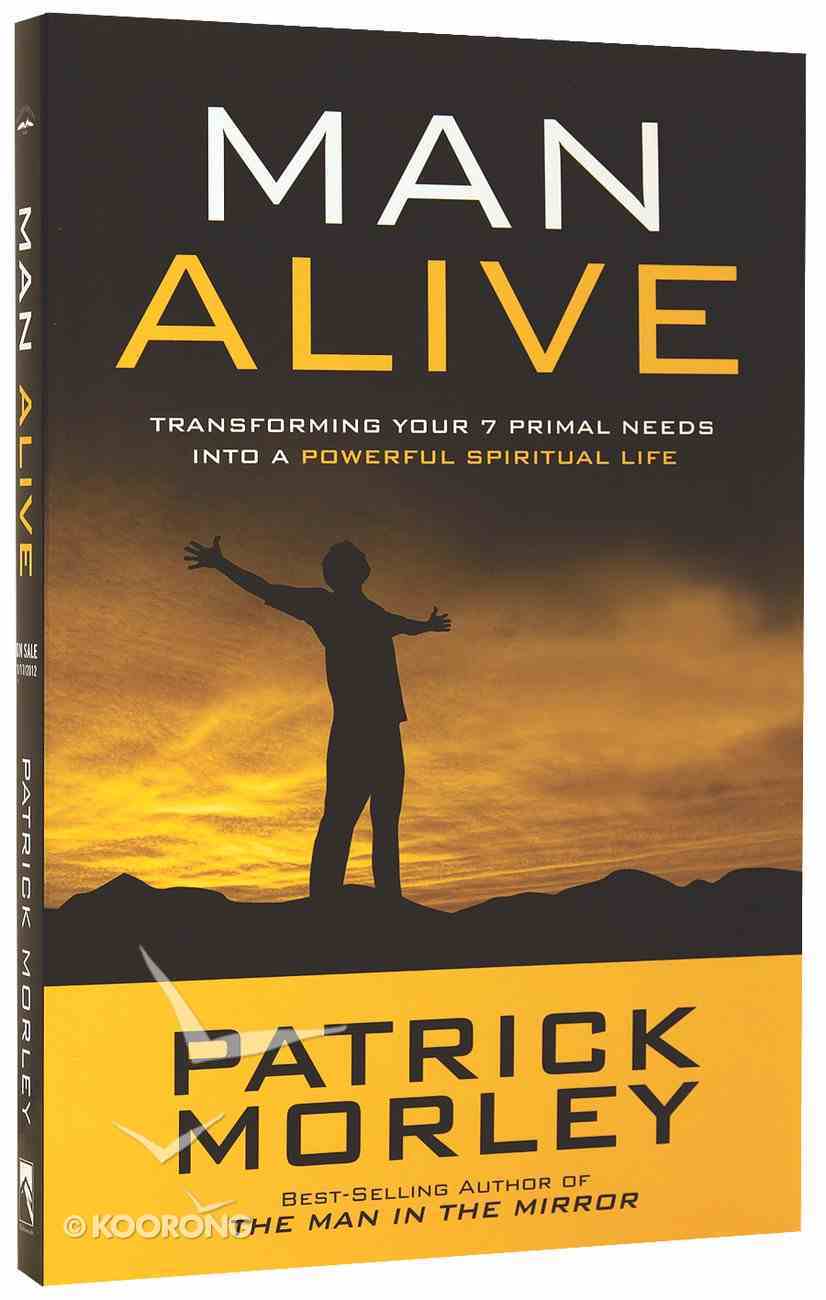 You Don't Have to Settle "Over the last four decades, I've met one-on-one with thousands of men. Most of them know that Jesus promised "a rich and satisfying life" (John 10:10), but too many are confused about what that...

You Don't Have to Settle

"Over the last four decades, I've met one-on-one with thousands of men. Most of them know that Jesus promised "a rich and satisfying life" (John 10:10), but too many are confused about what that looks like. In fact, I'd estimate that 90 percent of Christian men lead lukewarm, stagnant, defeated lives - and they hate it. When men try to put into words what's holding them back, they invariably describe one or more of these seven symptoms:

"Do you see yourself in these statements? In my experience, these inner aches and pains correspond to seven primal God-given needs that all men feel deeply. And in Man Alive, I'll show you something surprising - God's plan to harness that raw, restless energy you feel, pull you out of mediocrity, and propel you toward the life you were meant to live. I promise you...there is a way. No man should have to settle for half alive. You can become the man God created you to be. You can experience a powerful life transformed by Christ. In the book you're holding, I'll show you how."
- Patrick Morley, PhD

"Most men want to leave a positive moral and spiritual legacy. Yet we know that in order to do that, we must be living out our moral and spiritual beliefs in the present. Man Alive shows how to make this desire a reality. I highly recommend this book to men of all ages."
- Gary Chapman, author, The Five Love Languages

"Something is missing from the average Christian man's life, but what is it? Man Alive gives men permission to dig down and discover the fire within."
- Craig Groeschel, Senior Pastor of LifeChurch.tv; author of Dare to Drop the Pose, Chazown, and Weird

"A great many men I've met want so much to experience the rich and abundant life Jesus promised but don't. As a result, they feel dissatisfied, caught in conflicting emotions. Are you one? In Man Alive, Pat Morley--who has probably had more deeply personal conversations with men than anyone I know--goes straight to the heart of your dissatisfaction. He delivers a world of wisdom that will lead you to strength, confidence and clarity."
- Bob Buford, Founder, Leadership Network, author of Halftime and Finishing Well

Patrick Morley is the author of bestselling The Man in the Mirror. It was selected as one of the 100 Christian books that changed the twentieth century. After building one of Floridas 100 largest privately held companies, he founded Man in the Mirror in 1991, a nonprofit organization to help men find meaning and purpose in life. Patrick also trains leaders in the marketplace (www.MorleyLeadershipCenter.com). He is the author of 14 books including Walking with Christ in the Details of Life, The Rest of Your Life, and Two-Part Harmony

As stories began to emerge after the collapse of the World Trade Center towers, several survivors from the South Tower mentioned a courageous young man who mysteriously appeared from the smoke and led them to safety. They did not know who this man was who saved their lives, but this they remembered: wrapped over his mouth and nose
was a red bandana.

For fifty-six minutes the man in the red bandana shouted orders and led people down a stairwell to safety. “I found the stairs. Follow me,” he would say. He carried one woman down seventeen flights of stairs on his back. He set her down and urged others to help her and keep moving down. Then he headed back up.

A badly injured woman was sitting on a radiator, waiting for help, when the man with the red bandana over his face
came running across the room. “Follow me,” he told her. “I know the way out. I will lead you to safety.” He guided her and another group through the mayhem to the stairwell, got them started down toward freedom, and then disappeared back up into the smoke.

He was never seen again.

Six months later, on March 19, 2002, the body of the man with the red bandana was found intact alongside firefighters in a makeshift command center in the South Tower lobby, buried under 110 stories of rubble.

Slowly the story began to come out. His name was Welles Crowther. In high school he was the kid who would feed the puck to the hockey team’s worst player, hoping to give his teammate that first goal. He became a junior volunteer
firefighter in Upper Nyack, New York, following in his dad’s footsteps.

Welles graduated from Boston College, where he played lacrosse, always with his trademark red bandana. His father had always carried a blue bandana.

After college he worked as an equities trader on the 104th floor of the South Tower. He had a habit of putting change in his pocket in the morning to give to street people on his way to work.

Not long before September 11, Welles told his father, “I don’t know how much longer I can keep doing this work.” He
was restless for more. Crunching numbers for invisible clients just didn’t seem like what he was born to do. He dreamed of becoming a firefighter or public servant.

On September 11, 2001, at the age of twenty-four, Welles Crowther became both. And also a hero, because he was willing to go up while everyone else was coming down.

There Must Be More

This story touches a need deep inside me—something so primal that I find it hard to put into words. But it makes me yearn to feel more alive. And every man with whom I’ve ever shared it has felt the same way.

Like Welles, we all want to make a contribution and leave the world a better place. It is a primal need—one among many. By “primal,” I mean that as men we have a raw, restless energy that’s different from women. It needs to be channeled, chiseled, transformed.

Over the last four decades, I’ve met one-on-one with thousands of men over coffee, in restaurants, in offices, online, after Bible studies, or just hanging out at the racetrack—men like you. I’ve listened to their stories. I’ve heard what they said and didn’t say. Christian men know—or strongly sense—that we were created to lead powerful lives  transformed by Christ.

But something is blocking them. With a few inspiring exceptions, most men I talk to are confused about what a powerful, transformed life really looks like, regardless of how much “I love Jesus” they’ve got. They have high hopes for what Christianity offers but little to show for it. Their instincts are screaming, There must be more! When men try to put into words what keeps them from feeling fully alive, they invariably describe one or more of these seven symptoms:

Do you feel the angst? Do you see yourself on this list? As you can see, as men, our similarities dwarf our differences.
These inner aches and pains—these yearnings—correspond to the seven primal, instinctive needs we’ll be exploring
in this book.

The High Cost of Being Half Alive

I’d estimate that as many as 90 percent of Christian men lead lukewarm, stagnant, often defeated lives. They’re mired in spiritual mediocrity—and they hate it. Despite their good intentions, after they “walk the aisle” and “pray the sinner’s prayer,” most men return to their seats and resume their former lives. They don’t take the next steps. Almost imperceptibly, one disappointment at a time, the world sucks out their newfound joy and passion for life in Christ.

Men lose heart, go silent, and anesthetize their pain. Then they give up, burn out, drop out, or just slowly drift away. It’s not just getting older; it’s an assassination of the soul. And isn’t that exactly what the enemy of our souls wants?
As Jesus said, referring to the devil, “The thief’s purpose is to steal and kill and destroy” (John 10:10).

No man fails on purpose. None of us wakes up in the morning and thinks, I wonder what I can do today to irritate my
wife, neglect my kids, work too much, and have a moral failure. But many of us will.

The statistics are jarring:

The collateral damage is staggering. Tonight, one-third of America’s seventy-two million children will go to bed in a home without their biological dad. But perhaps the greatest cost to the physical absence of fathers is the practical absence of mothers. Essentially, one person must now do the work of two. As a young woman who grew up without a dad said, “When my mom and dad divorced, I didn’t just lose my dad. I also lost my mom, because she had to work long hours to support us.” A man leaves. A woman weeps herself to sleep. A little girl prays, “God, why is my daddy always so angry with me?” The men problem has made Dr. Phil a very rich man.

There has to be a better way.