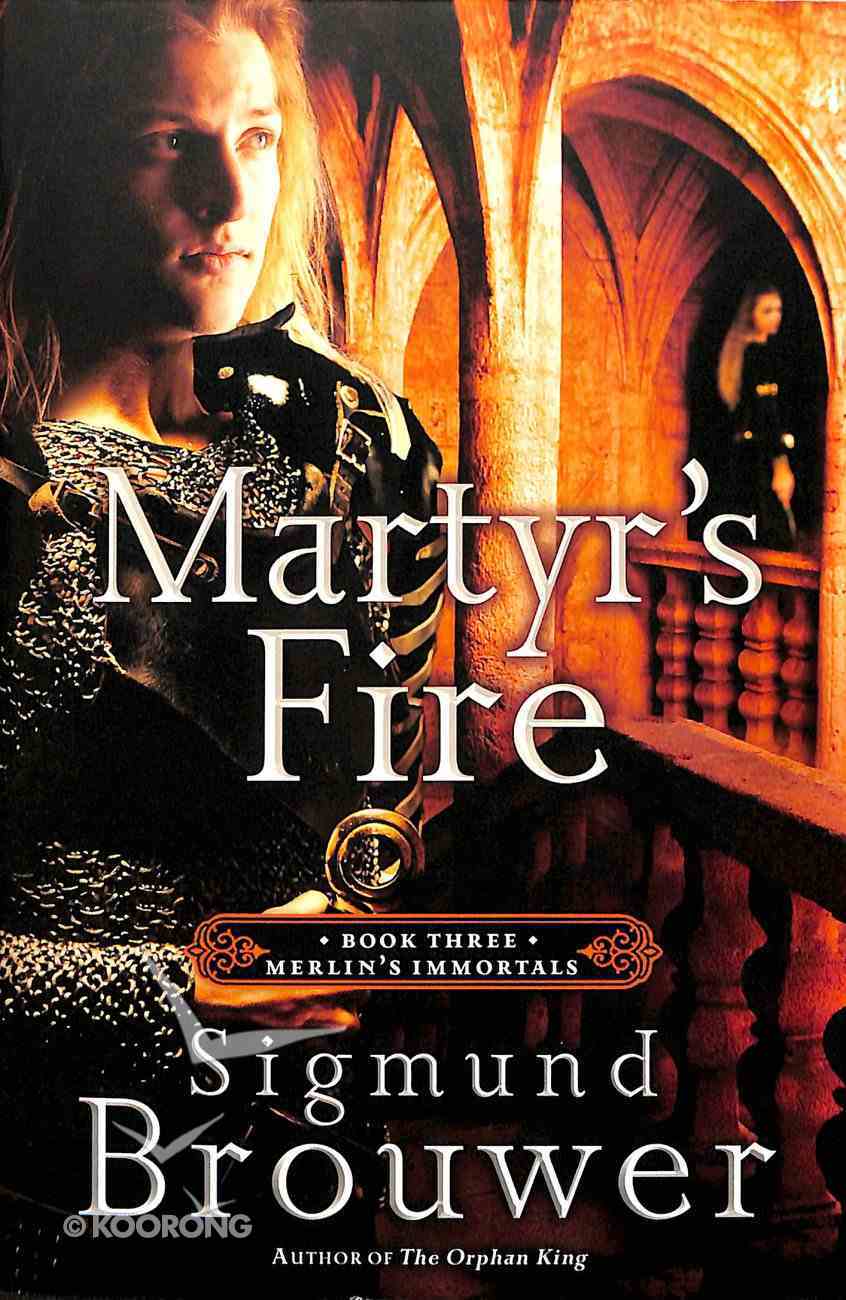 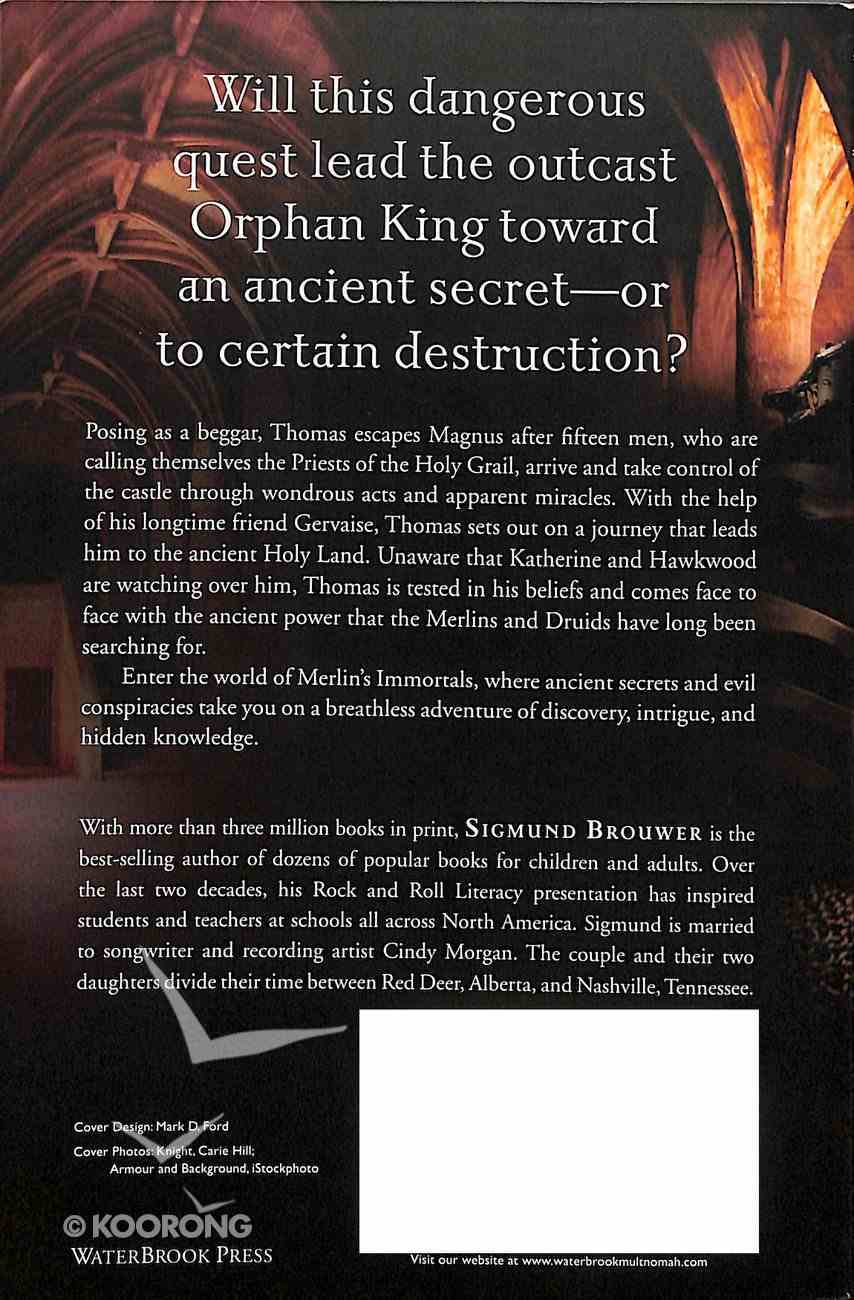 Will this dangerous quest lead the outcast Orphan King toward an ancient secret—or to certain destruction?   Posing as a beggar, Thomas escapes Magnus after fifteen men, who are calling themselves the Priests of the Holy Grail, arrive and...

Will this dangerous quest lead the outcast Orphan King toward an ancient secret—or to certain destruction?

Posing as a beggar, Thomas escapes Magnus after fifteen men, who are calling themselves the Priests of the Holy Grail, arrive and take control of the castle through wondrous acts and apparent miracles. With the help of his longtime friend Gervaise, Thomas sets out a journey that leads him to the ancient Holy Land. Unaware that Katherine and Hawkwood are watching over him, Thomas is tested in his beliefs and comes face to face with the ancient power that the Merlins and Druids have long been searching for.

Enter the world of Merlin’s Immortals, where ancient secrets and evil conspiracies take you on a breathless adventure of discovery, intrigue, and hidden knowledge.

The man that Isabelle faced was wealthy. And handsome, except for the stub where his left ear had been, now half-covered by hair. She could tell by the shift of his shoulders and the intensity of his gaze that he was enthralled by her, as indeed were nearly all men. Yet he was not Thomas. She spent hours dreaming that one day, Thomas, too, would be enthralled.

The man before her now had been on his horse, crossing a pasture that overlooked the town of York, clustered behind the high stone walls that protected it. With occasional clouds throwing brief shadows as they crossed overhead, she&rsquo;d waited in sunshine, knowing that this was along his regular path to York from hunting in the moors. She&rsquo;d been sitting on a blanket like a woman of leisure, dressed in fine silks, a basket beside her.

He was tall and slim, wearing the clothes of a nobleman. He&rsquo;d dismounted and looked around, as if wondering where her servants might be. She had risen from the blanket and now lifted the basket with food.

&ldquo;If you&rsquo;ve been riding long,&rdquo; she purred, &ldquo;you must be hungry. And I&rsquo;ve been waiting for you.&rdquo;

She set the basket on the ground and leaned down to lift out a piece of thick buttered bread and pieces of rich cheese.

As she expected, he took it without hesitation. &ldquo;You know who I am, then?&rdquo;

He smiled with pride.

He was Michael of York, the son of the earl who had enlisted Thomas&rsquo;s army to prevail against the Scots not so long ago. As he tore off a chunk of bread and stuffed it into his mouth, he looked around again. Not with the eye of a man wary of a trap, but with the sharp glance of a predator. She was in front of him and so alone. And he was a rich and powerful man, accustomed to being offered what he wanted&mdash;or to taking it whether it was offered or not. Obvious on her neck was jewelry that was worth a year&rsquo;s wages for a working man. If he had the heart of a thief, and she knew he did, his mind would have been on her apparent helplessness.

Since no noblewoman should be alone in a field because the dangers were too great, the apparent helplessness should have made him suspicious. But men were fools.

&ldquo;Mead?&rdquo; she asked, holding up a chalice.

He took it without a word, as if he were entitled to it. He rammed some cheese into his mouth first, then washed it down with the honey wine.

&ldquo;You&rsquo;ve been waiting for me,&rdquo; Michael said, with a grin that came too close to a leer.

&ldquo;With a message from those who watched you cut off your own ear.&rdquo;

His smile froze, just for an instant. Then he laughed.

&ldquo;From anyone but a lady as lovely as yourself, I would take that accusation as an insult. And I would answer it accordingly.&rdquo;

&ldquo;It is a dangerous accusation,&rdquo; she agreed. &ldquo;If your father ever had proof that you severed your own ear to force him to attack Magnus, you would be thrown in prison and disinherited.&rdquo;

&ldquo;You are very alone here.&rdquo; He gestured at the open pasture. &ldquo;You would be wise not to anger me.&rdquo;

He placed his right hand on the hilt of his knife, hanging from a sheath on a gold-studded belt.

&ldquo;And you would be wise to listen to me,&rdquo; she said. &ldquo;After all, your father already questions your loyalty, does he not? After the trial by ordeal, did he&#160;not leave Magnus believing that Thomas is an ally and that you had deceived him?&rdquo;

Michael&rsquo;s face pinched. He was beginning to suspect a trap. But his next words suggested that he believed the trap came from the earl.

&ldquo;I will speak to you as I have repeatedly spoken to my father: I do not know the men who attacked me and cut off my ear. All I know is that I was given a message to deliver and told it was from Thomas. Obviously, those who cut off my ear were the ones deceitful about Thomas. Not me. Go back to my father and tell him this.&rdquo;

&ldquo;Your father did not send me,&rdquo; she said. She tossed him a heavy ring. &ldquo;Look closely at the symbol. Those of the symbol are the ones who sent me.&rdquo;

He caught it in his left hand and studied it. He glanced at her and closed his fist around the ring. He kept his right hand on the handle of his knife.

&ldquo;I don&rsquo;t believe you.&rdquo; His words were certain enough, but not the tone.

&ldquo;Let me repeat what you were told by those of the symbol. You were promised that if you delivered a letter to your father, along with your ear, pretending it was a letter from Thomas, that your father would go to war and take the castle of Magnus. And that Magnus would be yours.&rdquo;

Isabelle knew this was truth. She&rsquo;d been hidden behind trees, watching the discussion, seeing greed cross this man&rsquo;s face as he calculated what small price it would cost for him to obtain a kingdom&mdash;his deception and his ear.

&ldquo;The man who made you that promise,&rdquo; she said, &ldquo;was my father. Richard Mewburn, who ruled Magnus until Thomas took it from him.&rdquo;

She watched his smile fade as he thought through the implications. This was not something that a person could guess&mdash;proof to him that she knew for certain. And if she knew of that secret conversation, then she likely knew much more.

Michael lifted his hand away from his knife. &ldquo;Please tell Lord Mewburn that I had no intention of harming you.&rdquo;

&ldquo;Of course not,&rdquo; she said. &ldquo;We are just having a conversation. So tell me. If my father were to deliver York to you, would you, in return, help him secure Magnus?&rdquo;

&ldquo;York cannot be mine while my father is the earl,&rdquo; he answered. It was an oblique answer. Nothing in it openly suggested disloyalty. Yet it was an invitation to continue.

&ldquo;A man who is willing to cut off his own ear is a man hungry for power,&rdquo; Isabelle said. &ldquo;This time, however, what we ask of you will be far less painful."

Michael&rsquo;s face reflected obvious relief before once again contorting into dismay. &ldquo;But I was already promised that Magnus would fall. It did not. The trial by ordeal that Thomas faced and survived&mdash;&rdquo;

&ldquo;Nothing will be asked of you until Magnus falls,&rdquo; Isabelle said. &ldquo;But believe me, it will. Very soon.&rdquo;