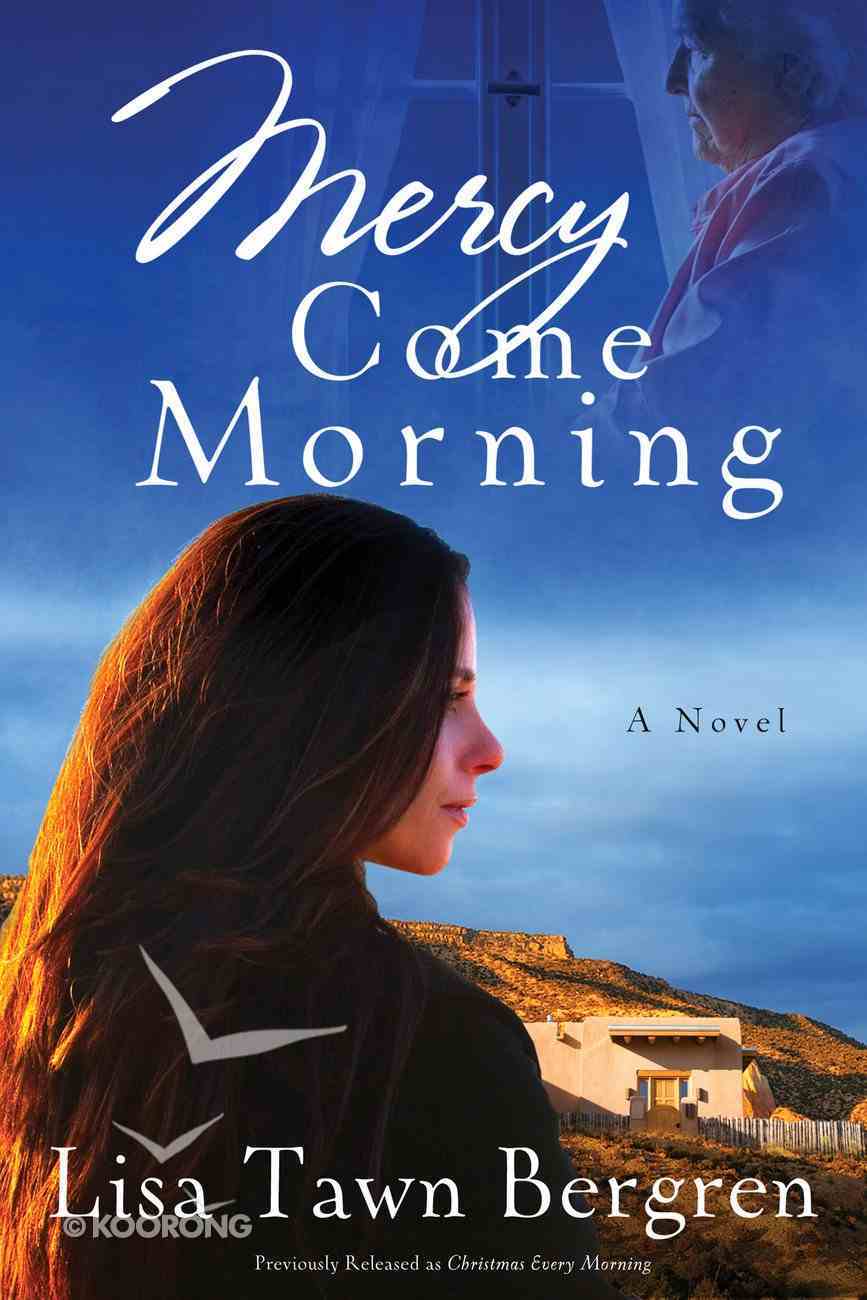 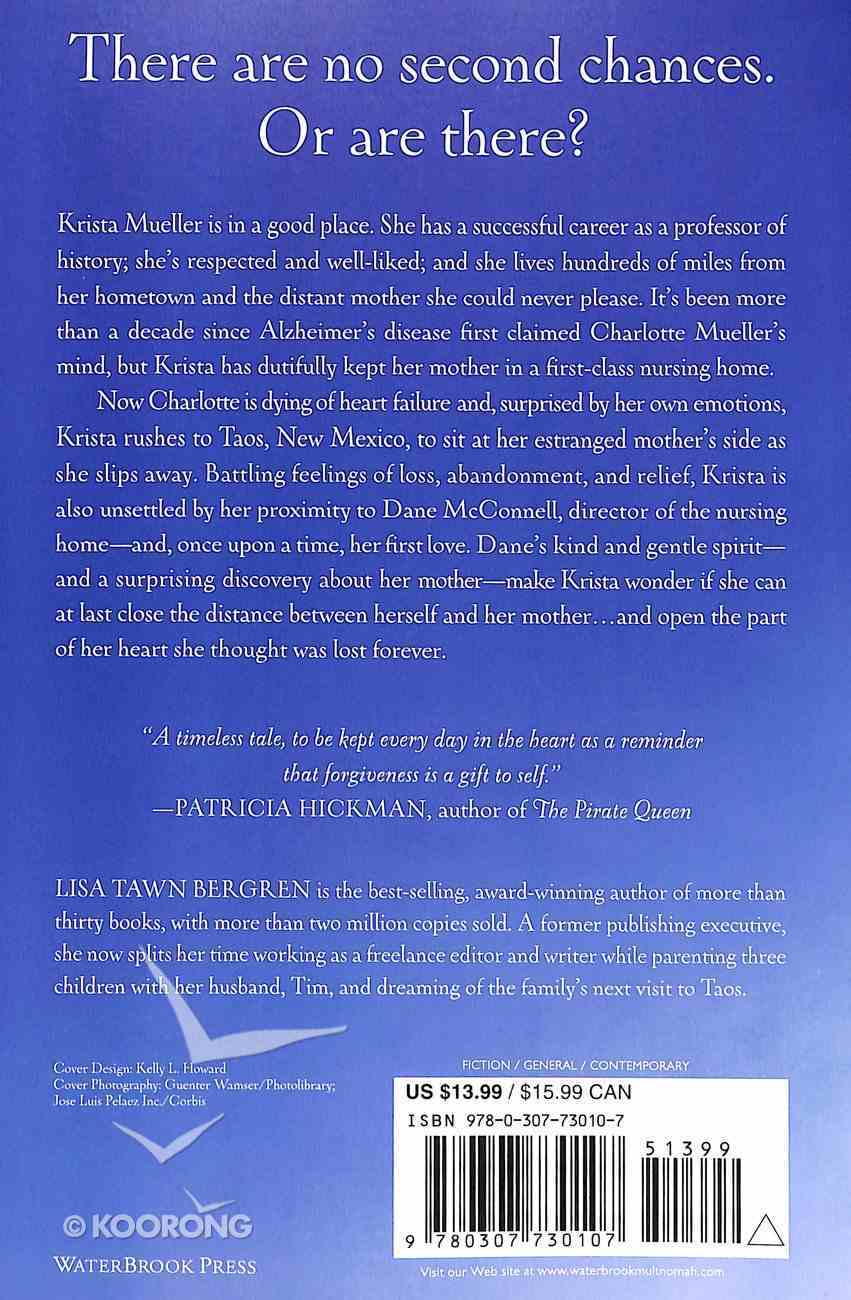 Praise for MERCY COME MORNING ; Mercy Come Morning is Lisa Bergren's best yet! Strong characters dealing with passionate life-and-death issues in a Southwest setting so authentic I could taste the chilies and smell the sage. A compelling story of...

Praise for MERCY COME MORNING ; Mercy Come Morning is Lisa Bergren's best yet! Strong characters dealing with passionate life-and-death issues in a Southwest setting so authentic I could taste the chilies and smell the sage. A compelling story of longing, love, and the search for life.& It's a story to meet the need in every woman's heart. ; -JANE KIRKPATRICK, author of A Name of Her Own and the Kinship and Courage series ;Bergren just keeps getting better. Mercy Come Morning is a deeply moving story of love lost and found. It is also a gentle but compelling invitation to remember the things we should know by heart but often forget along the way. ; -CAROLYN ARENDS, recording artist and author of We've Been Waiting for You ;Lisa Bergren writes like a dream, softly calling us to familiar places, walking us through our memories in grandma's kitchen, past the disappointments of growing up, and through the complexities of imperfect families. Mercy Come Morning is a timeless tale, to be kept every day in the heart as a reminder that forgiveness is a gift to self and joy the glittering residue left upon our doorpost when Christmas is kept every day of the year. ; -PATRICIA HICKMAN, author of Sandpebbles and Katrina's Wings
-Publisher

There are no second chances. Or are there?

Krista Mueller is in a good place. She’s got a successful career as a professor of history; she’s respected and well-liked; and she lives hundreds of miles from her hometown and the distant mother she could never please. It’s been more than a decade since Alzheimer’s disease first claimed Charlotte Mueller’s mind, but Krista has dutifully kept her mother in a first-class nursing home.

Now Charlotte is dying of heart failure and, surprised by her own emotions, Krista rushes to Taos, New Mexico, to sit at her estranged mother’s side as she slips away. Battling feelings of loss, abandonment, and relief, Krista is also unsettled by her proximity to Dane McConnell, director of the nursing home—and, once upon a time, her first love. Dane’s kind and gentle spirit—and a surprising discovery about her mother—make Krista wonder if she can at last close the distance between her and her mother … and open the part of her heart she thought was lost forever.

“A timeless tale, to be kept every day in the heart as a reminder
that forgiveness is a gift to self.”
—PATRICIA HICKMAN, author of The Pirate Queen

Previously released as Christmas Every Morning

I took a long, slow breath. “She died a long time ago, Dane.”

He paused, and I could picture him formulating his next words, something that would move me. Why was my relationship with my mother so important to him? I mean, other than the fact that she was a patient in his care. “There’s still time, Kristabelle.”

I sighed. Dane knew that his old nickname for me always got to me. “For what? For long, deep conversations?” I winced at the harsh slice of sarcasm in my tone.

“You never know,” he said quietly. “An aide found something you should see.”

“Come. I’ll keep it here in my office until you arrive. Consider it a Christmas present.”

“Okay, consider it an early present.”

It was typical of him to hold out a mysterious hook like that. “I don’t know, Dane. The school term isn’t over yet. It’s a hard time to get someone to cover for me.” It wasn’t the whole truth. I had an assistant professor who could handle things on her own. And I could get back for finals. Maybe. Unless Dane wasn’t overstating the facts.

“Krista. She’s dying. Her doctor tells me she has a few weeks, tops. Tell your department chair. He’ll let you go. This is the end.” I stared out my cottage window to the old pines that covered my yard in shadows. The end. The end had always seemed so far away. Too far away. In some ways I wanted an end to my relationship with my mother, the mother who had never loved me as I longed to be loved. When she started disappearing, with her went so many
of my hopes for what could have been. The road to this place had been long and lonely. Except for Dane. He had always been there, had always waited. I owed it to him to show. “I’ll be there on Saturday.”

“Okay. I teach a Saturday morning class. I can get out of here after lunch and down there by five or six.”

I slowly let my mouth close and paused. I was in no mood to argue with him now. “I’ll meet you at Cimarron,” I said.
“Great. It will be good to see you, Kristabelle.” I closed my eyes, imagining him in his office at Cimarron Care Center. Brushing his too-long hair out of his eyes as he looked through his own window.

He hung up then without another word, and it left me feeling slightly bereft. I hung on to the telephone receiver as if I could catch one more word, one more breath, one more connection with the man who had stolen my heart at sixteen.

Dane McConnell remained on my mind as I wrapped up things at the college, prepped my assistant, Alissa, to handle my history classes for the following week, and then drove the scenic route down to Taos from Colorado Springs, about a five-hour trip. My old Honda Prelude hugged the roads along the magnificent San Luis Valley. The valley’s shoulders were still covered in late spring snow, her belly carpeted in a rich, verdant green. It was here that in 1862 Maggie O’Neil single-handedly led a wagon train to settle a town in western Colorado, and nearby Cecilia Gaines went so
crazy one winter they named a waterway in her honor—“Woman Hollering Creek.”

I drove too fast but liked the way the speed made my scalp tingle when I rounded a corner and dipped, sending my stomach flying. Dane had never driven too fast. He was methodical in everything he did, quietly moving ever forward. He had done much in his years since grad school, establishing Cimarron and making it a national think tank for those involved in gerontology. After high school we had essentially ceased communication for years before Cimarron came about. Then when Mother finally got to the point in her descent into Alzheimer’s that she needed fulltime institutionalized care, I gave him a call. I hadn’t been able to find a facility that I was satisfied with for more than a year, when a college friend had shown me the magazine article on the opening of Cimarron and its patron saint, Dane McConnell.

“Good looking and nice to old people,” she had moaned. “Why can’t I meet a guy like that?”

“I know him,” I said, staring at the black-and-white photograph.

“What happened?” she asked, her eyes dripping disbelief.

I still wasn’t sure. Things between us had simply faded over the years. But when I saw him again, it all seemed to come back. Or at least a part of what we had once had. There always seemed to be a submerged wall between us, something we couldn’t quite bridge or blast through. So we had simply gone swimming toward different shores.

Mother’s care had brought us back together over the last five years. With the congestive heart failure that was taking her body, I supposed the link between us would finally be severed. I would retreat to Colorado, and he would remain in our beloved Taos, the place of our youth, of our beginnings, of our hearts. And any lingering dream of living happily ever after with Dane McConnell could be buried forever with my unhappy memories of Mother.

I loosened my hands on the wheel, realizing that I was gripping

it so hard my knuckles were white. I glanced in the rearview mirror, knowing that my reverie was distracting me from paying attention to the road. It was just that Dane was a hard man to get over. His unique ancestry had gifted him with the looks of a Scottish Highlander and the sultry, earthy ways of the Taos Indians. A curious, inspiring mix that left him with both a leader’s stance and a wise man’s knowing eyes. Grounded but visionary. A driving force, yet empathetic at the same time. His employees loved working for him. Women routinely fell in love with him.

I didn’t know why I could never get my act together so we could finally fall in love and stay in love. He’d certainly done his part. For some reason I’d always sensed that Dane was waiting for me, of all people. Why messed-up, confused me? Yet there he was. I’d found my reluctance easy to blame on my mother. She didn’t love me as a mother should, yada-yada, but I’d had enough time with my counselor to know that there are reasons beyond her. Reasons that circle back to myself.

I’d always felt as if I was chasing after parental love, but the longer I chased it, the further it receded from my reach. It left a hole in my heart that I was hard-pressed to fill. God had come close to doing the job. Close. But there was still something there, another blockade I had yet to blast away. I would probably be working on my “issues” my whole life. But as my friend Michaela says, “Everyone’s got issues.” Supposedly I need to embrace them. I just want them to go away.

“Yeah,” I muttered. Dane McConnell was better off without me. Who needed a woman still foundering in her past?

I had to focus on Mother. If this was indeed the end, I needed to wrap things up with her. Find closure. Some measure of peace. Even if she couldn’t say the words I longed to hear.

I love you, Krista.

Why was it that she had never been able to force those four words from her lips?