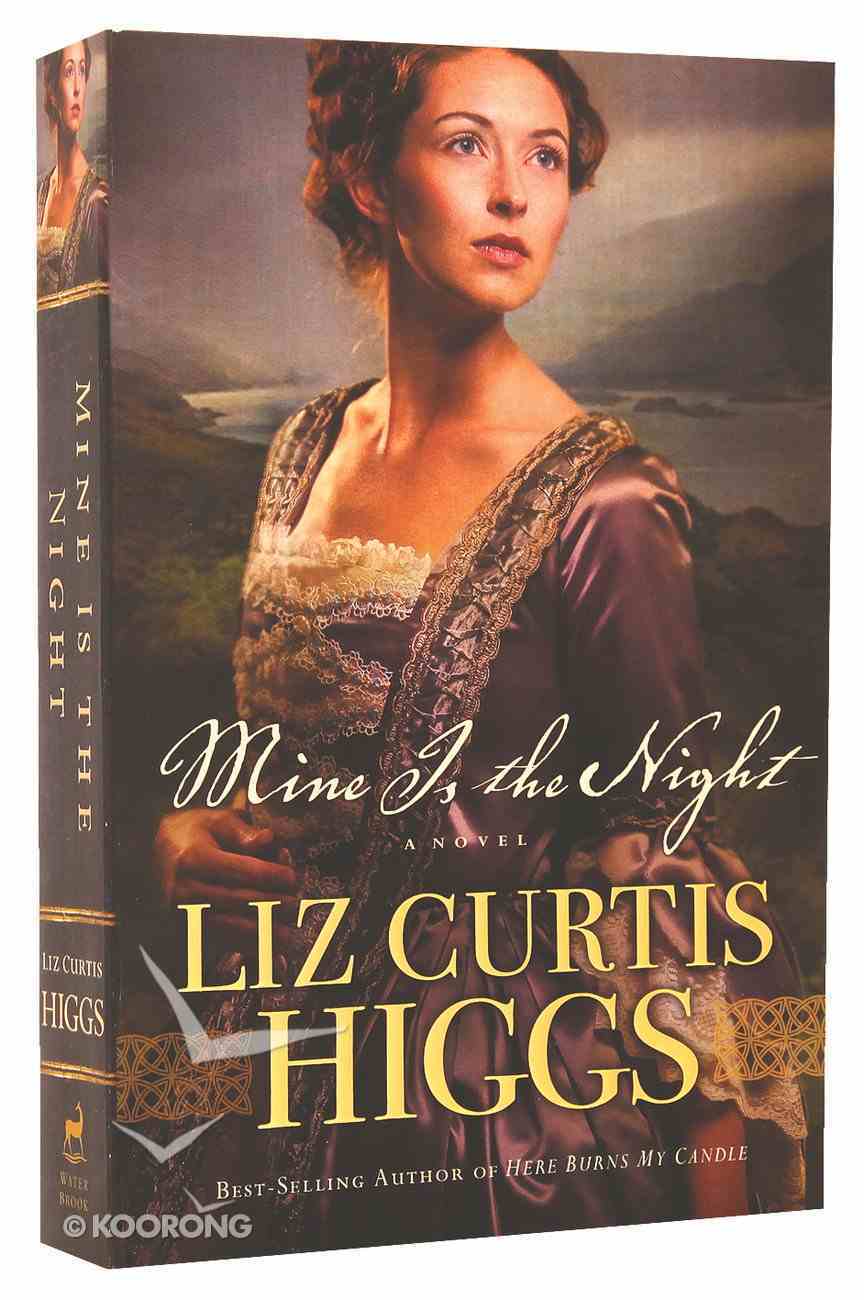 Mine is the Night

She lost everything she loved. He had everything she needed. But could she find the courage to trust him? Stepping from a battered coach on a rainy April eve, newly widowed Elisabeth Kerr must begin again, without husband or...

Stepping from a battered coach on a rainy April eve, newly widowed Elisabeth Kerr must begin again, without husband or title, property or fortune. She is unafraid of work and gifted with a needle, but how will she stitch together the tattered remnants of her life? And who will mend her heart, torn asunder by betrayal and deception?
Elisabeth has not come to Selkirk alone. Her mother-in-law, Marjory Kerr, is a woman undone, having buried her husband, her sons, and any promise of grandchildren. Dependent upon a distant cousin with meager resources, Marjory dreads the future almost as much as she regrets the past. Yet joy still comes knocking, and hope is often found in unexpected places.
Then a worthy hero steps forward, rekindling a spark of hope. Will he risk his reputation to defend two women labeled as traitors to the Crown? Or will a wealthy beauty, untainted by scandal, capture his affections?
The heartrending journey of the Kerr women comes to a glorious finish in Mine Is the Night, a sparkling gem of redemption and restoration set in eighteenth-century Scotland.

Praise for Mine Is the Night a Mine Is the Night was everything I hoped it would be-the crown of the series! I loved the historical setting, the details, the love stories, the characters who change and grow. The pace and storylines kept me turning pages; I couldnat put it down.a -Francine Rivers, best-selling author of Redeeming Love aFew authors stir my emotions more deeply than Liz Curtis Higgs. One does not merely read her novels; one forges a bond so deep with her characters that reader and story become one, embarking on a journey that both inspires and transforms. But be warned- Mine Is the Night will steal your night from the first page to the last, and never will hours be better spent. It was an absolute pleasure to read.a -Julie Lessman, author of A Hope Undaunted aLiz Curtis Higgs has once again combined her extraordinary skill as a storyteller with her elegant writing style to weave a grand Scottish tale, one that transports us back to the past in an emotional and unforgettable journey. Beautifully crafted and clearly written from the heart, Mine Is the Night just took its place among my other favorite novels from one of our most gifted historical authors. I was reluctant to see the story of the Kerr women end-but what an ending it is!a -BJ Hoff, author of The Emerald Ballad aLiz Curtis Higgs brings the book of Ruth to life in Jacobite Scotland with Mine Is the Night, a page-turning, emotionally intense, gloriously researched, and soul-stirring read. I was in eighteenth-century Scotland with characters I did not want to leave. Simply brilliant.a -Linda Windsor, author of Healer aLiz Curtis Higgs does it again! Mine Is the Night delivers a compelling story of intrigue, adventure, and love. With extreme attention to detail and historical accuracy, Liz creates a love story to last the ages. Her ability to weave Bible story, historical culture, and fiction into a rich tapestry is sure to delight you and leave you longing for more.a -Tracie Peterson, best-selling author of Embers of Love aStunning from start to finish! Sharply witty, charming, romantic, captivating. Liz Curtis Higgs delivers a finale that satisfies in every way. Her best yet!a -Tamera Alexander, author of Beyond This Moment
-Publisher

The distant hoofbeats were growing louder.

Elisabeth Kerr quickly pushed aside the curtain and leaned out the carriage window. A cool spring rain, borne on a blustery wind, stung her cheeks. She could not see the riders on horseback, hidden by the steep hill behind her. But she could hear them galloping hard, closing the gap. Her mother-in-law seemed unconcerned, her attention drawn to the puddle forming at their feet. A frown creased her brow. “Do you mean for us to arrive in Selkirk even more disheveled than we already are?” Three long days of being jostled about in a cramped and dirty coach had left Marjory
Kerr in a mood as foul as the weather.

“’Tis not the rain that concerns me.” Elisabeth resumed her seat, feeling a bit unsteady. “No ordinary traveling party would ride with such haste.”

Marjory’s breath caught. “Surely you do not think—”

Had they not heard the rumors at every inn and coaching halt? King George’s men were scouring the countryside for anyone who’d aided bonny Prince Charlie in his disastrous bid to reclaim the British throne for the long deposed
Stuarts. Each whispered account was worse than the last. Wounded rebel soldiers clubbed to death. Houses burned with entire families inside. Wives and daughters ravished by British dragoons.

Help us, Lord. Please. Elisabeth slipped her arm round her mother-in-law’s shoulders as she heard the riders crest the hill and bear down on them.

“We were almost home,” Marjory fretted.

“The Lord will rescue us,” Elisabeth said firmly, and then they were overtaken.

A male voice cut through the rain-soaked air, and the carriage jarred to a halt.

Mr. Dewar, their round-bellied coachman, dropped from his perch and landed by the window with a grunt. He rocked back on his heels until he found his balance, then yanked open the carriage door without ceremony. “Beg yer pardon, leddies. The captain here would have a wird with ye.”

Marjory’s temper flared. “He cannot expect us to stand in the rain.”

“On the contrary, madam.” A British dragoon dismounted and rolled into view like a loaded cannon. His shoulders were broad, his legs short, his neck invisible. “I insist upon it. At once, if you please.”

With a silent prayer for strength, Elisabeth gathered her hoops and maneuvered through the narrow carriage doorway. She was grateful for Mr. Dewar’s hand as she stepped down, trying not to drag her skirts through the mud. Despite the evening gloom, her eyes traced the outline of a hillside town not far south. Almost home.

The captain, whom Elisabeth guessed to be about five-and-forty years, watched in stony silence as Marjory disembarked. His scarlet coat was drenched, his cuffed, black boots were covered with filth, and the soggy brim of his cocked hat bore a noticeable wave.

He was also shorter than Elisabeth had first imagined. When she lifted her head, making the most of her long neck, she was fully two inches taller than he. Some days she bemoaned her height but not this day.

By the time Marjory joined her on the roadside, a half-dozen uniformed men had crowded round. Broadswords hung at their sides, yet their scowls were far more menacing.

“Come now,” Mr. Dewar said gruffly. “Ye’ve nae need to frighten my passengers. State yer business, and be done with it. We’ve little daylight left and less than a mile to travel.”

“Selkirk is your destination?” The captain seemed disappointed. “Not many Highland rebels to be found there.”

“’Tis a royal burgh,” Marjory told him, her irritation showing. “Our townsfolk have been loyal to the crown for centuries.”

Elisabeth shot her a guarded look. Have a care, dear Marjory.

The captain ignored her mother-in-law’s comments, all the while studying their plain black gowns, a curious light in his eyes. “In mourning, are we? For husbands, I’ll wager.” He took a brazen step toward Elisabeth, standing entirely too close. “Tell me, lass. Did your men give their lives in service to King George? At Falkirk perhaps? Or Culloden?”

Please, Lord, give me the right words.

Elisabeth took a long, slow breath, then spoke from her heart. “Our brave men died at Falkirk honoring the King who has no equal.”

He cocked one eyebrow. “Did they now?”

“Aye.” She met the captain’s gaze without flinching, well aware of which sovereign she had in mind. I am God, and there is none like me. She’d not lied. Nor had the dragoon grasped the truth behind her words: by divine right the crown belonged to Prince Charlie.

“No one compares to His Royal Highness, King George,” he said expansively.

“Though I am sorry for your loss. No doubt your men died heroes.”

Elisabeth merely nodded, praying he’d not ask their names. A list of royalist soldiers killed at Falkirk had circulated round Edinburgh for weeks. The captain might recall that Lord Donald and Andrew Kerr were not named among the British casualties. Instead, her handsome husband and his younger brother were counted among the fallen rebels on that stormy January evening.

My sweet Donald. However grievous his sins, however much he’d wounded her, she’d loved him once and mourned him still.

Her courage bolstered by the thought of Donald in his dark blue uniform, Elisabeth squared her shoulders and ignored the rain sluicing down her neck. “My mother-in-law and I are eager to resume our journey. If we are done here—”

“We are not.” Still lingering too near, the captain inclined his head, measuring her. “A shame your husband left such a bonny widow. Though if you fancy another soldier in your bed, one of my men will gladly oblige—”

“Sir!” Marjory protested. “How dare you address a lady in so coarse a manner.”

His dragoons quickly closed ranks. “A lady?” one of them grumbled. “She sounds more like a Highlander to my ear.”

The captain’s expression darkened. “Aye, so she does.” Without warning he grasped the belled cuff of Elisabeth’s sleeve and turned back the fabric.

“Where is it, lass?Where is your silk Jacobite rose?”

“You’ve no need to look.” Elisabeth tried to wrest free of him. “I haven’t one.”

Ignoring her objections, he roughly examined the other cuff, nearly tearing apart the seam. “The white rose of Scotland was Prince Charlie’s favorite, was it not? I’ve plucked them off many a Highland rebel.”

“I imagine you have.” Elisabeth freed her sleeve from his grasp. “Are you quite satisfied?”

“Far from it, lass.” The captain eyed the neckline of her gown, his mouth twisting into an ugly sneer. “It seems your flower is well hidden. Nevertheless, I mean to have it.”