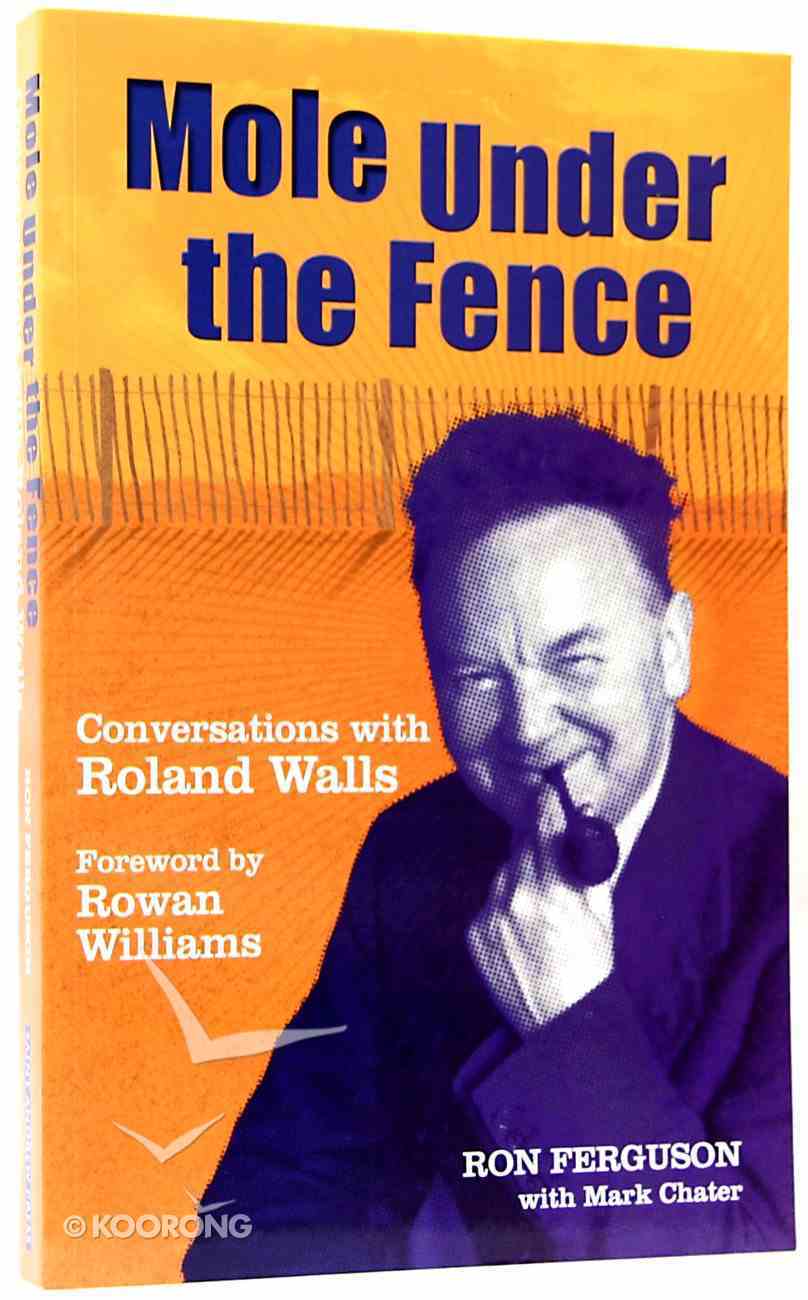 Mold Under the Fence (Roland Walls)

Father Roland Walls has inspired and influenced many - from Christian leaders of all denominations to people down on their luck. This volume shares the views of this prophetic, wise, mischievous and deeply loved former priest-in-charge of the famed Rosslyn...

Under the Influence
Julia Fisher
Paperback

Under the Cover of Light
Carole Avriett
eBook

A Hope-Filled Journey Under His Sky
Bruce G Allder
eBook

Under the Rainbow
Catherine Campbell
eBook

In My Father's House: The Years Before the Hiding Place
Boom Corrie Ten
Paperback

Father Roland Walls has inspired and influenced many - from Christian leaders of all denominations to people down on their luck. This volume shares the views of this prophetic, wise, mischievous and deeply loved former priest-in-charge of the famed Rosslyn Chapel.
-Publisher

Roland Walls is a name known only by word-of-mouth and few of his teachings ever appeared in print - until now. For the first time, the view of this prophetic, wise, mischievous and deelpy loved former priest-in-charge of the famed Rosslyn Chapel are available and accessible to all, in his favourite conversational form. 'The book offers an impression of a man who thinks while he talks. While Walls is not performing an academic act, nevertheless his thoughts, convictions, questions, doubts, hope, humour, compassion, irony, almost tumble out of the pages, yet in an orderly, pure manner ...And there is much more. Hence the short conclusion must be: go and buy!' Coracle Busloads of tourists arrive at Rosslyn Chapel because it features in the blockbuster novel The Da Vinci Code. Nearby, in a 'slightly dilapidated building', is the home of the Community of the Transfiguration. Many people have visited this place, too. It is what Ron Ferguson calls 'an arena of healing, hope and inspiration'. He visited it to record conversations with Roland Walls, a remarkable, popular and inspiring theologian who has many illuminating things to say about our times. EXTRACT Roland, how do you understand the kingdom of God? One of the things that is really distressing about the switch of attention from the phenomenal church to the kingdom of God - which is good, and I'm wholeheartedly behind it - is that in making this tremendous shift from identifying the kingdom of God with the church, most of us go to town about building the kingdom. Now so far as I know there is no mention in the Bible whatsoever of building the kingdom, or indeed of building Jerusalem. The Lord builds up Jerusalem, and he comes down from heaven to us. And that deflected arrow from God to us is the constant temptation of the zealous and the active. It's a common thing, isn't it, this talk of building the kingdom, having a blueprint? That's right, as if we've got a blueprint, and all we've got to do is build it. But that overthrows the essential good news of the gospel, which is that it is all going to be gift. It's going to arrive. You're going to enter it. You're going to be invited to see it, to enter it, to be given it. And it's going to arrive from God to us. Now what do we mean then, by the kingdom of God? Is it here? Is it coming? What are we actually offering people? Well, I think the kingdom of God, in its meaning in the Aramaic and Greek, and in the Latin, regnum, means the rule of God: where God has his way, the kingdom comes. In the Lord's Prayer we pray eschatologically about the end: but we also pray fervently, "Thy will be done", today, by us - but also, in spite of us. Now the kingdom comes when the will is done. So all we should do is either (a) make a space where God can himself do something, and we sit back and watch it, which is marvellous - most of the time God can't do any will of his because we're having our religious or spiritual wills fulfilled by ourselves - or (b) say, "Well, look Lord, put me in the way of your will, so that I can do it by the insights and the strengths you've given me." So in a way God's doing it, yes, through us. I believe that the kingdom can be prepared for by making a space, by following the little insignificant - seemingly insignificant - will of God, in how we spend money and how we treat one another and all the rest of it. But in the end the kingdom itself, the bliss of the kingdom, is sheer grace, nothing we can manage. So the stuff about building the kingdom is a real heresy? Yes, it's the usual Western semi-Pelagianism. When we ask anybody about the sacraments, when we talk about the Word, when we talk about prayer, theologically we know we have to avoid semi-Pelagianism - but in actual practice, especially in preaching, we get on to semi-Pelagianism, because it's so easy to invite people into some incredible challenges and all that nonsense. The word "challenge" - another word that never appears in scripture - seems to occur until you're knee-deep in challenges after most sermons. That's right, it's all about challenge, building and great exhortations ...Yes! What are we going to do about it, and all that. The minister in the pulpit loves that bit of the sermon when he's done with all the exposition of the text and gets on to - well what are we going to do about it? That's one of the things that seems to run through the whole church spectrum - the challenge to build, produce some kind of results. Those who preach that show the kind of "oughtness" they're living with There's a real anxiety there ...and a terrible guilt that they haven't done this or they haven't done that. That's what gives them the nerve to tell other people. And the terrible thing is that just at the moment when the Church of Rome is reviewing what it thinks of Luther - some of them going so far as to say that one of these days he'll be declared, in some of his writings, a Doctor of the Church - the Protestant world seems to have gone on to a works thing! Recommended by Rowan Williams, John Miller, Keith O'Brien, Brian Smith, Iain Torrance and Alison Newell
-Publisher

RON FERGUSON is an award-winning journalist, writing for The Herald, the Press & Journal and Life & Work among other publications. Previously, he was leader of the Iona Community and minister of St Magnus Cathedral on Orkney, where he lives.