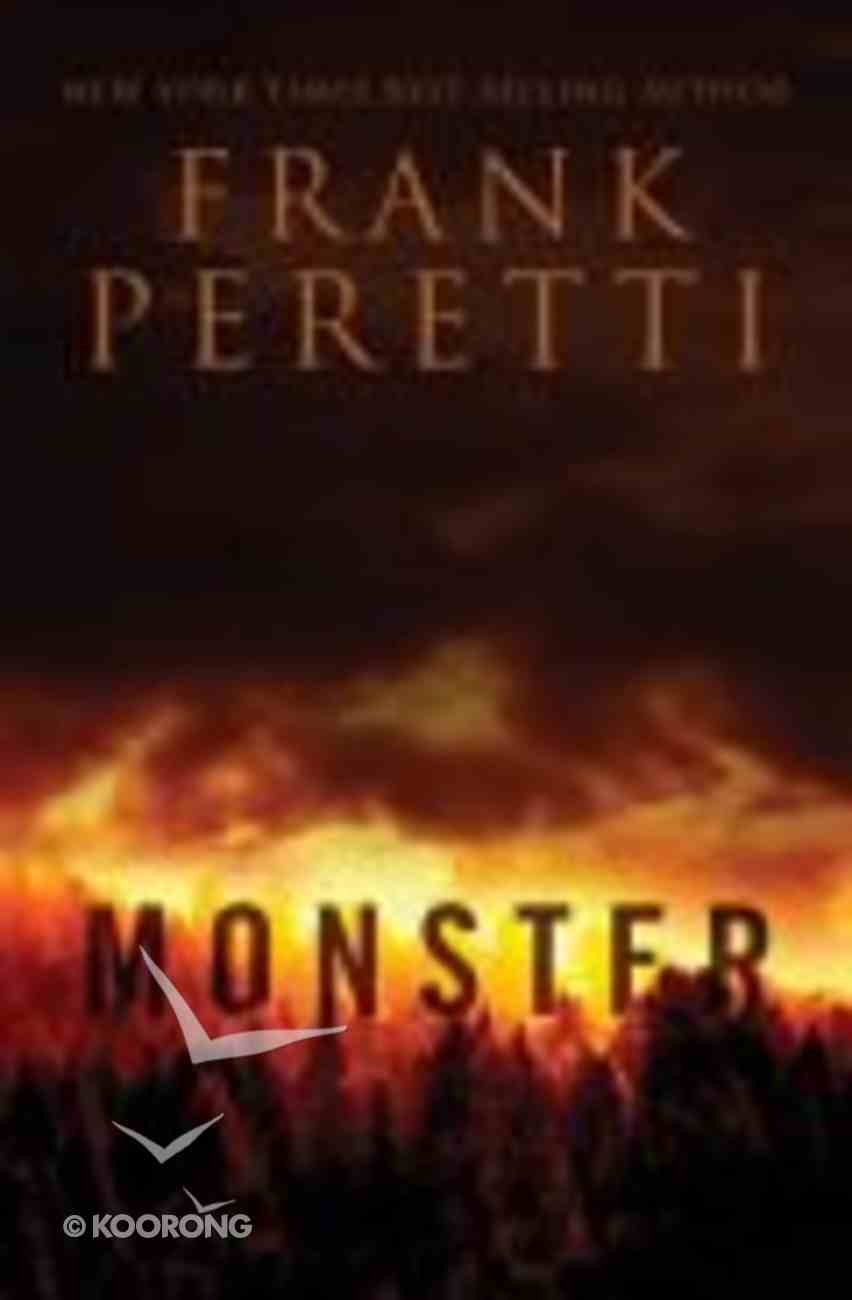 Something's out there... Reed Shelton organized this survival weekend. Hired the best guide in the region. Meticulously trained, studied, and packed while enouraging his wife, Beck, to do the same. But little did they know that surviving the elements...


Reed Shelton organized this survival weekend. Hired the best guide in the region. Meticulously trained, studied, and packed while enouraging his wife, Beck, to do the same. But little did they know that surviving the elements would become the least of their worries. During thier first night of camping, an unearthly wail pierces the calm of the forest. Then someone--no, something--emerges from the dense woods and begins pursuing them. Everything that follows is a blur to Reed--except for the unforgettable image of a huge creature carrying his wife into the darkness. Dependant on the efforts of a small town and a band of friends, Reed knows they have little time to find Beck. Even more important, he soon realizes that they aren't the only ones doing the hunting. Something much faster, more relentless--and definately not human--has begun to hunt them.


Frank Peretti is at the top of his game in this "New York Times" best-selling novel of "survival of the fittest." Nothing is as it first appears in this thriller where things that go bump in the night are only a heartbeat away.

Some monsters are real.


Miles away from the hectic city, Reed and Rebecca hike into the beautiful Northwester woods. They are surrounded by gorgeous mountains, waterfalls, and hundreds of acres of unspoiled wilderness.


During their first night camping, an unearthly wail pierces the calm of the forest. Then something emerges from the dense woods. Everything that follows is a blur to Reed?except the unforgettable image of a huge creature carrying his wife into the darkness.


Enter into deep wilderness where the rules of civilization no longer apply. A world where strange shadows lurk. Where creatures long attributed to overactive imaginations and nightmares are the hunters . . .and people are the hunted.


The Hunter, rifle in his hands, dug in a heel and came to a sudden halt on the game trail, motionless, nearly invisible in a thicket of serviceberry and crowded pines. He heard something.


The first rays of the sun flamed over the ridge to the east, knifing through the pine boughs and morning haze in translucent wedges, backlighting tiny galaxies of swirling bugs. Soon the warming air would float up the draw and the pines would whisper like distant surf, but in the lull between the cool of night and the warmth of day, the air was still, the sounds distinct. The Hunter heard his own pulse. The scraping of branches against his camouflage sleeves was crisp and brilliant, the snapping of twigs under his boots almost startling.


And the eerie howl was clear enough to reach him from miles away, audible under the sound of the jays and between the chatterings of a squirrel.


He waited, not breathing, until he heard it again: long, mournful, rising in pitch, and then holding that anguished note to the point of agony before trailing off.


The Hunter's brow crinkled under the bill of his cap. The howl was too deep and guttural for a wolf. A cougar never made a sound like that. A bear? Not to his knowledge. If it was his quarry, it was upset about something.


And far ahead of him.


He moved again, quickstepping, ducking branches, eyes darting about, dealing with the distance.


Before he had worked his way through the forest another mile, he saw a breach in the forest canopy and an open patch of daylight through the trees. He was coming to a clearing.


He slowed, cautious, found a hiding place behind a massive fallen fir, and peered ahead.


Just a few yards beyond him, the forest had been shorn open by a logging operation, a wide swath of open ground littered with forest debris and freshly sawn tree stumps. A dirt road cut through it all, a house-sized pile of limbs and slash awaited burning, and on the far side of the clearing, a hulking, yellow bulldozer sat cold and silent, its tracks caked with fresh earth. A huge pile of logs lay neatly stacked near the road, ready for the logging trucks.


He saw no movement, and the only sound was the quiet rumble of a battered pickup truck idling near the center of the clearing.


He waited, crouching, eyes level with the top of the fallen tree, scanning the clearing, searching for the human beings who had to be there. But no one appeared and the truck just kept idling.


His gaze flitted from the truck to the bulldozer, then to the huge pile of logs, and then to the truck again where something protruding from behind the truck's front wheels caught his eye. He grabbed a compact pair of binoculars from a pocket and took a closer look.


The protrusion was a man's arm, motionless and streaked with red.


Looking about, the Hunter waited just a few more seconds and then, satisfied that no one else was there, he climbed over the log and stole into the clearing, stepping carefully from rock to stump to patch of grass, trying to avoid any soil that would register his footprints. The truck was parked in nothing but loose soil, freshly chewed by the bulldozer, but he would have to deal with that problem later. He was planning his moves as he went along.


He reached the truck, slowed with caution, and then eased around it, neck craning, in no mood for gruesome surprises.


What he found on the other side was no surprise, but it was gruesome, and definitely a complication. Cursing, he leaned against the truck's hood, warily scanned the tree line and the logging road, and started weighing his options.


The crumpled body on the ground was obviously one of the logging crew, most likely the foreman who'd lingered alone too long on the site the previous evening, judging from the stiff condition of his body. He lay on his belly in the dirt, his body crushed, dried blood streaked from his nose and mouth, his head twisted grotesquely on a broken neck. His hard hat lay top down several feet away, and the ground around the truck was littered with metal shreds of what used to be a lunch box and scattered, chewed-up plastic wrappings that used to hold a lunch.


I don't have time for this!


The Hunter quickly stifled his rage. He needed to calculate, foresee, plan.


His gaze shifted to the pile of logs. That might be an option. He could make it look like an accident that would explain the bent, torn, rag-doll condition of the dead man.


Were the keys in the bulldozer?


Leaving his rifle by the truck, the Hunter ran to the bulldozer, clambered up on the big steel track, and stepped into the cab. He sank into the worn and torn driver's seat and searched the panel for the keys. Then he sniffed a chuckle of realization: Of course. This wasn't in town, where idle punks drifted about looking to steal anything not locked up or bolted down, and this machine was no car for joyriding. The key was in the ignition.


It had been a while since his college summers with the construction crew, but if this thing was anything like that track hoe he used to operate . . .


He clicked the key over to Preheat, waited, then turned the key to Start.


The dozer cranked to life with a puff of black smoke.


His mind was racing, still planning, as he put the mountainous machine into gear and got it moving. Reverse came easily enough. Forward was easier. With careful manipulation of the brakes and levers, he brought the dozer to the back of the log pile, then left it there, still running.


Hauling the dead man across the ground would be messy, but it was the only option. The Hunter grabbed the man's wrists--the right arm was intact, but the left arm had been snapped above the elbow and flexed like a rubber hose--and started pulling. He tugged and dragged the body over limbs, grass, rocks, and debris. The man's head dangled from a wrung neck and scraped on the ground. When the Hunter reached the front of the log pile, he let go of the arms. The stiffened body flopped into the dust.


Seated once again in the dozer, he edged the machine forward, reaching under the logs with the bucket. With a calculating, steady pull of the lever, he raised the bucket, lifting the logs, lifting, lifting, until . . .


The pile upset. The logs rolled and rumbled down, bouncing, tumbling one over the other, drumming the ground, kicking up dust.


The dead man's body disappeared beneath a jackstraw pile of logs.


No time, no time! The Hunter eased the dozer back to its resting place, switched it off, and leaped to the ground. He ran back to the idling truck and pocketed every metal scrap, every torn plastic wrapper he could find. Then, slinging his rifle over his shoulder, he spotted and grabbed a broken-off evergreen bough and went to work, retracing his every step, brushing and erasing each footprint with rapid side-sweeps as he backed out of the clearing.


As expected, he heard the slowly rising sound of a vehicle coming up the logging road, climbing switchbacks, lurching through gears, rattling over potholes, and growling over gravel.


He crouched and headed for the trees, tossing away the branch. Just as he slipped into the forest, a truck pulled into the clearing on the other side. He stole through the crowded timber, planting every footstep silently in the soft, pine-needled ground. Truck doors slammed. Voices lifted, followed by cries of alarm. Those loggers were going to have quite a morning.