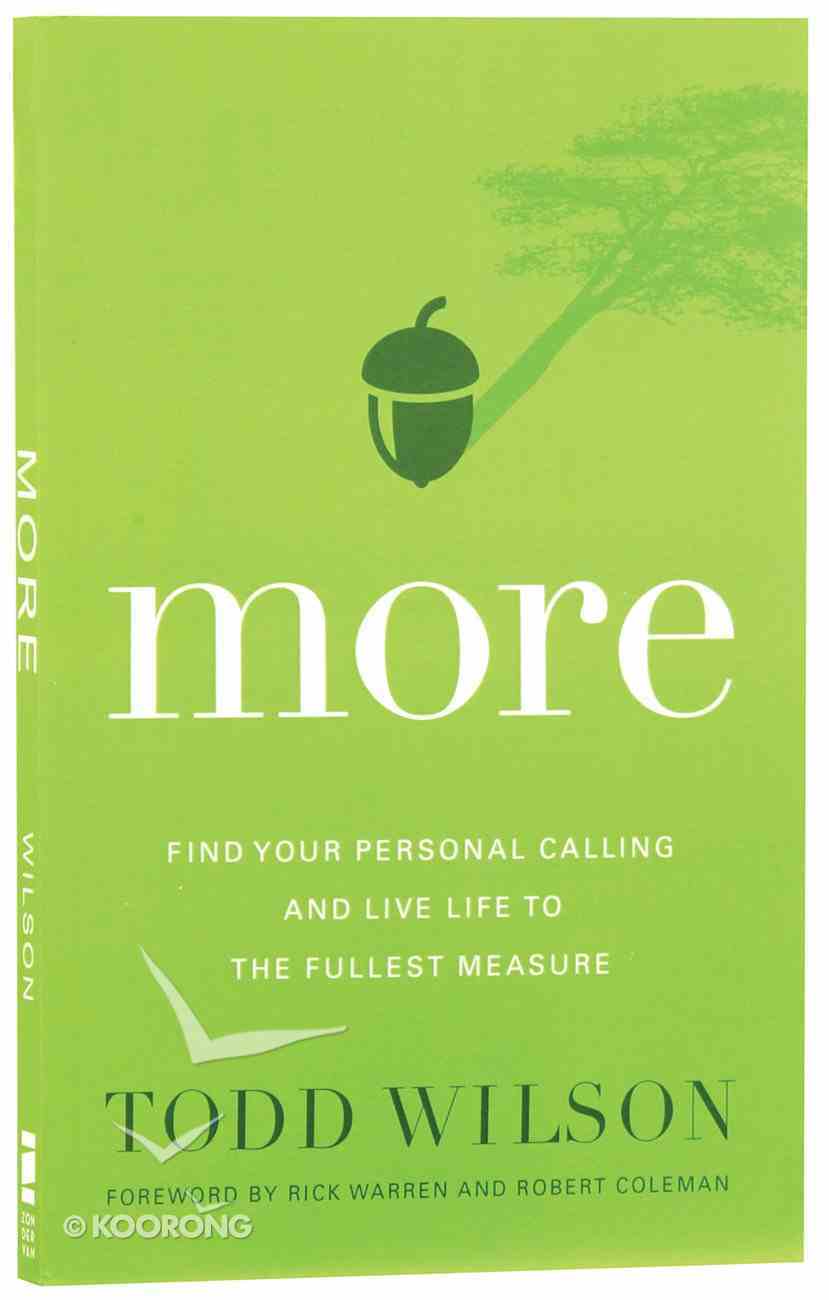 More: Find Your Personal Calling and Live Life to the Fullest Measure

Church strategist Todd Wilson shows how all believers can live more abundant lives based on their unique calling. Through an easy-to-use framework, Wilson enables readers to answer and act on the questions: 'Who am I created to be?' 'What am...

Limited Availability
Expected to ship within 12 hours from Australia.
Learn More
Free Shipping
for orders over $99.

The Father's Kiss: Living in the Reality of God's Love
Tracy Williamson
Paperback

Church strategist Todd Wilson shows how all believers can live more abundant lives based on their unique calling. Through an easy-to-use framework, Wilson enables readers to answer and act on the questions: 'Who am I created to be?' 'What am I created to do?' and 'Where am I to be best positioned to do it?'

:
More meets Christians where they're at, acknowledging the roots of their discontent and demonstrating how to move from inspiration and desire into action. Church strategist and ministry activator Todd Wilson shows how all believers can live more abundant lives around the uniqueness of how they were made and what they are called to do.


Introducing a memorable vocabulary and an easy-to-use practical framework, More equips readers to embark on a journey of discovering their unique personal calling. It enables readers to answer three of the most important and profound questions we all naturally ask.


The integrated answers to these key questions-the BE-DO-GO of a person's life-represent the core dimensions of personal calling. Inspiring and challenging, More gives readers permission and encouragement to engage in the journey God has solely for them.

Todd Wilson (Ph.D. in New Testament at the University of Cambridge) is responsible for teaching and training adults at College Church, Wheaton Illinois. This includes our adult communities, mens and womens ministries, and several other opportunities for learning and growth. He joined the staff at College Church in September 2005, and is an adjunct instructor in biblical studies at Wheaton College. He is the author of The Curse of the Law and the Crisis in Galatia (Mohr-Siebeck), Paul's Life and Letters (Lion Publishing), and coeditor (with Leland Ryken) of Preach the Word: Essays on Expository Preaching: In Honor of Dr. R. Kent Hughes (Crossway). Todd and his wife, Katie, have three children. -Editorial Review.