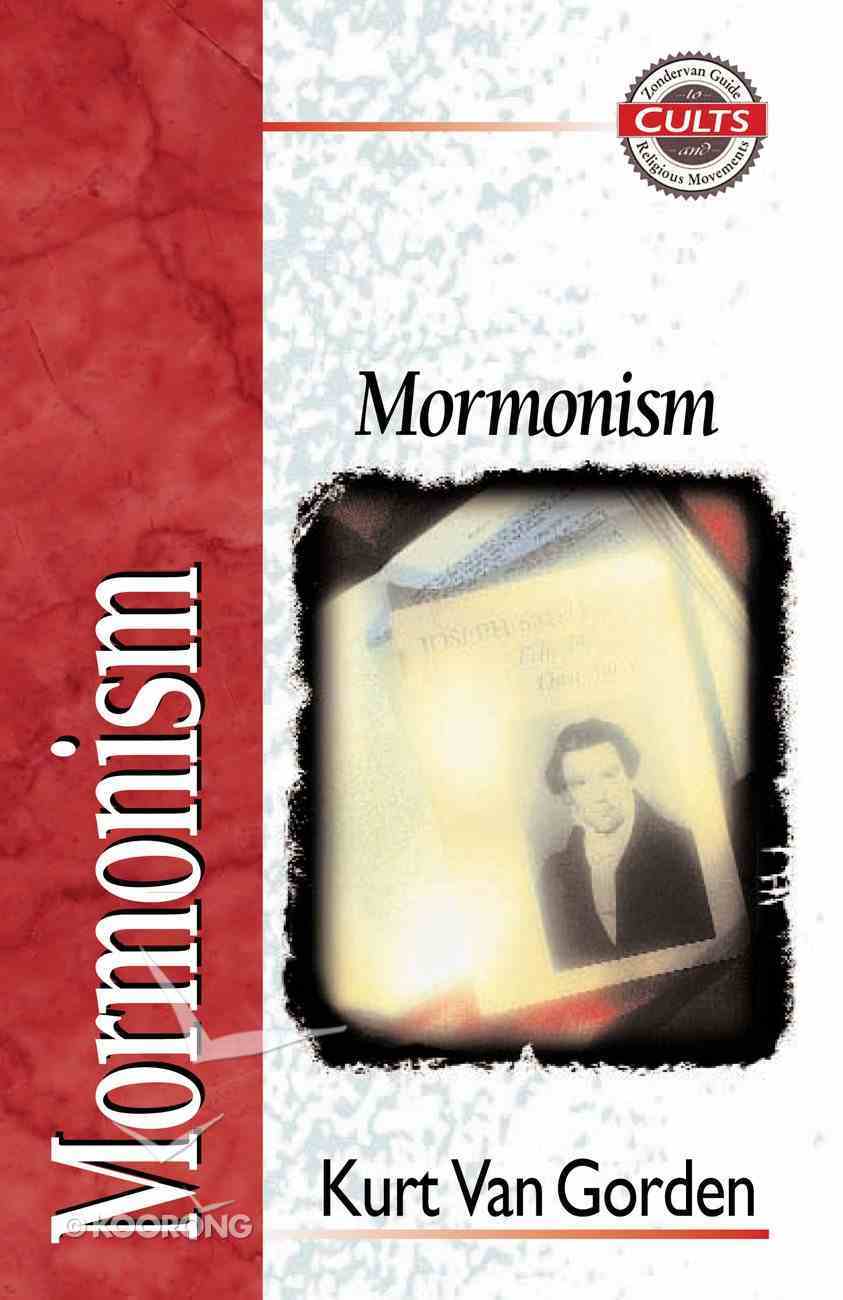 Kurt Van Gorden This guide analyses the Church of Jesus Christ of Latter-DaySaints,areligiousmovementofNorthAmericanorigin.

Kurt Van Gorden This guide analyses the Church of Jesus Christ of Latter-DaySaints,areligiousmovementofNorthAmericanorigin.

With their strong emphasis on traditional family values, education, discipline, and service, Mormons sound and look more "Christian" than many believers. At first glance, there seems to be little to criticize in what they say or do. But peel back the facade, and you find a cult with its roots in immorality and heresy. The story of the Mormon Church is one of in-fighting, racism, polygamy, and violence. Often, even the members of the group don't know the full truth about either the history or the teachings of this fast-growing church. -- Why this series? This is an age when countless groups and movements, old and new, mark the religious landscape in our culture, leaving many people confused or uncertain in their search for spiritual truth and meaning. Because few people have the time or opportunity to research these movements fully, these books provide essential information and insights for their spiritual journeys. Each book has five sections: - A concise introduction to the group - A
-Publisher

Kurt Van Gordon, formerly a pastor in Utah, is the director of Jude 3 Missions and the Utah Gospel Mission, founded as a mission to cults in 1898.

Part I: Introduction I. Historical Background A. Joseph Smith, Jr. (1805 -- 44): Founder 1. Smith's Family Background (1805 -- 20) a. Smith was born to Joseph and Lucy Smith on December 23, 1805, in Sharon, Vermont. b. Smith was the fourth child of nine who survived. c. In 1817, the Smith family settled on a farm in Palmyra, New York. d. Smith's parents were inactive Protestants. (1) Joseph and Lucy Smith blended superstitious folklore1 and occult dabbling into the home life. (2) His mother, two brothers, and a sister later joined the Presbyterian Church in Palmyra, New York. 2. Early Religious Visions and Experiences (1820 -- 27) a. Vision of the Father and Jesus Christ (1820). (1) In the Spring of 1820, when Smith was fourteen years old, he claimed that a revival broke out in the Presbyterian, Baptist, and Methodist churches of Palmyra. (2) Smith was not willing to join in the excitement, but questioned which, if any, church was true. (3) After reading James 1:5, which says that God will give wisdom to those who ask, Smith claimed that he went to the woods to pray and there received a vision of God the Father and Jesus Christ. (4) When Smith asked them which church to join, he was told, 'Join none of them, for they were all wrong,' and that 'all their creeds were an abomination in his sight; that those professors were all corrupt.' b. Moroni and the Golden Plates (1823 -- 27) (1) Smith claimed that an angel named Moroni appeared to him on September 21, 1823. (2) Moroni said he was a former inhabitant of America who, shortly before his death, buried some golden plates which recorded the history of his people and the fullness of the gospel. (3) Moroni said Smith would translate the 'Reformed Egyptian hieroglyphics' on these golden plates, using special stones called the Urim and Thummim (The Book of Mormon is Smith's alleged translation of the golden plates although he knew no language other than English). (4) The following day, as Smith was working in a field, Moroni appeared to him again and took him to a hill called Cumorah, where he showed Smith the golden plates and the Urim and Thummim. Moroni forbade Smith to remove the plates, due to his age (seventeen), and commanded him to return to that same place annually for four years. (5) On September 22, 1827, Moroni gave Smith permission to dig up the golden plates, along with the Urim and Thummim, and to begin to translate them. 3. Attempts to Authenticate the Book of Mormon a. Dr. Charles Anthon (1) Martin Harris, Smith's neighbor, was to sell his farm to subsidize the cost of printing the Book of Mormon. (2) Smith copied some of the Reformed Egyptian characters on a piece of paper for Mr. Harris, who then took the paper to Dr. Charles Anthon, the esteemed linguist and professor at Columbia College in New York. (3) According to Joseph Smith, Dr. Anthon confirmed the authenticity of the characters and translation until Mr. Harris told him that they came from an angel, whereupon Anthon destroyed his certification. (4) Anthon later wrote a testimony that contradicts Smith's account, saying that Harris did indeed present him with the transcription, but that Anthon declared the characters to be perfectly nonsensical and anything but 'Egyptian hieroglyphics.' b. 'Witnesses' to the Plates (1) Oliver Cowdery, David Whitmer, and Martin Harris claimed that, while in the company of Smith (June 1829), the angel Moroni appeared to them and was holding the golden plates. (2) Shortly afterward, eight others allegedly received a special manifestation of the angel and the plates while accompanied by Smith. 4. The Priesthood Conferred (1829) a. The Aaronic Priesthood (1) Joseph Smith claimed to restore Christianity to the earth. (2) One of Smith's first acts of restoration was to reinstate the authoratative priesthood. In May 1829, while he and Oliver Cowdery were praying in a forest near Bainbridge, Pennsylvania, John the Baptist allegedly appeared to them and conferred the Aaronic priesthood upon them. (3) Mormons claim that the Aaronic priesthood gives them the authority to baptize and assist in sacramental service. b. The Melchizedek Priesthood (1) Again in May 1829, Oliver Cowdery and Joseph Smith were praying in the woods when, they claimed, Peter, James, and John appeared to them and conferred the Melchizedekian priesthood upon them. (2) Mormons claim that the Melchizedekian priesthood gives them the authority to govern the church and to practice the 'laying on of hands' to impart the 'gift of the Holy Ghost.' 5. Translation and Publication of the Book of Mormon (1830) a. Joseph Smith translated the Book of Mormon with the aid of his seer stone. The Urim and Thummin were not used; he instead used an egg-shaped, chocolate-colored seer stone. b. Smith reportedly sat behind a curtain and read the translated text to various scribes, including his wife, Emma, and Book of Mormon witnesses, Martin Harris and Oliver Cowdery. c. The Book of Mormon was published in March 1830. 6. The Mormon Church (1830) a. Smith officially founded the Mormon Church as The Church of Christ on April 6, 1830, in Fayette, New York. b. After two name changes they settled on the Church of Jesus Christ of Latter-day Saints in 1838. 7. Smith's 'Translation' of the Bible (1831) a. Joseph Smith began to 'translate' the King James Version of the Bible in 1831, without referring to Hebrew or Greek manuscripts. b. Smith claimed that he used 'the gift and power of God' to translate the Bible. In other words, his 'translation' was based on supposed direct revelation. 8. Continuing Revelations (1833 -- 44) a. Smith continued to receive revelations and published them as The Book of Commandments in 1833. b. This was enlarged and later published as the Doctrine and Covenants in 1835. Additional revelations were added through the years. c. Some of Smith's revelations were gathered post-mortem and published as The Pearl of Great Price (1851).

Ashamed of Joseph
Steven A Crane, Charles A Crane
eBook