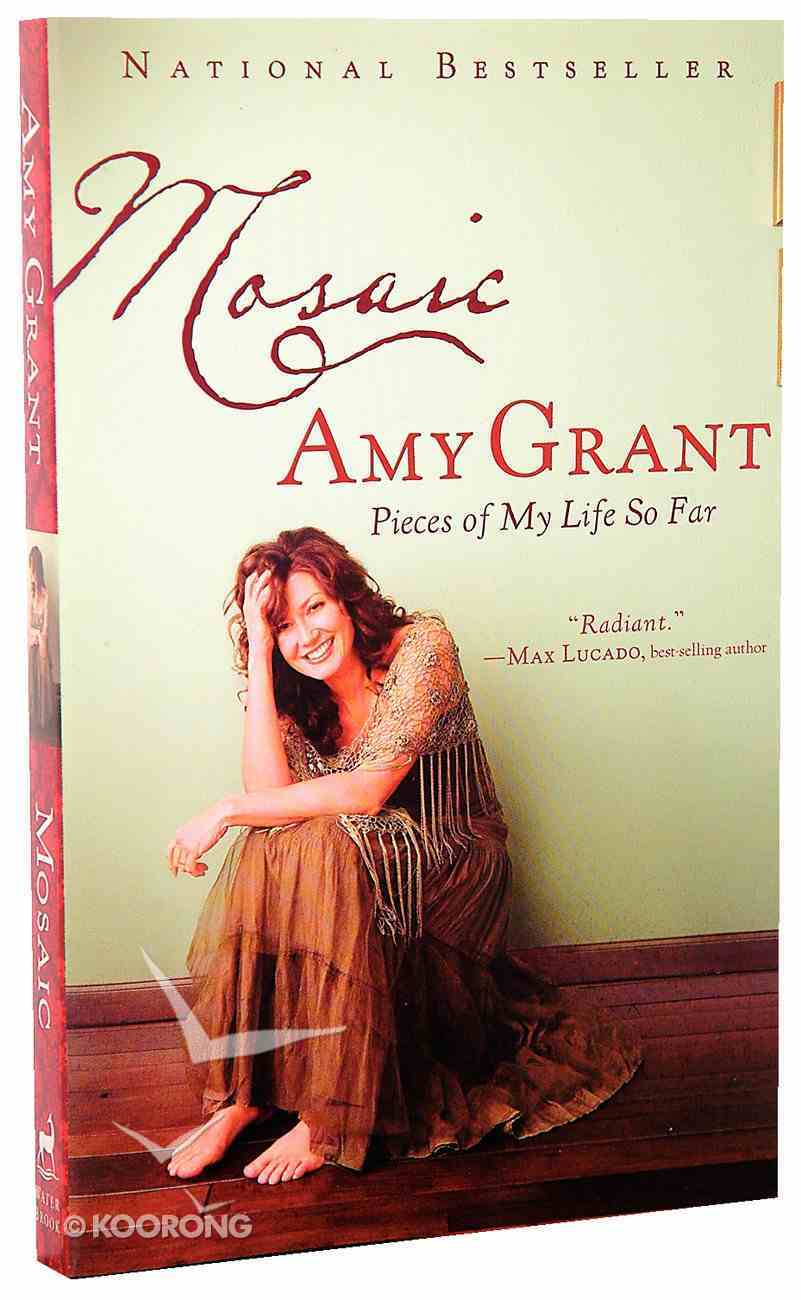 One of Christian music's most beloved and all-time popular artists bares her heart and soul in this collection of luminous reflections on her life so far. Amy Grant offers a candid, insightful account of her faith journey, from childhood, through...

I've Seen the End of You: A Neurosurgeon's Look At Faith, Doubt, and the Things We Think We Know
W Lee Warren
Hardback

One of Christian music's most beloved and all-time popular artists bares her heart and soul in this collection of luminous reflections on her life so far. Amy Grant offers a candid, insightful account of her faith journey, from childhood, through celebrity and family life.

"One of America's most popular music artists shares beautiful pieces of an unforgettable human mosaic, revealing pieces of a life in progress.^" ^With her unmistakable voice and honest lyrics, Amy Grant has captured a unique place in American music. As the bestselling Christian music artist of all time, a crossover pop sensation, and the wife of country music star Vince Gill, Amy has lived much of her life in the spotlight, subject to adulation, speculation, and scrutiny. Now for the first time she bares her heart and soul to reveal thoughts on everything from motherhood and marriage to fame and forgiveness. Whether describing personal moments alone on a moonlit hillside or very public ones performing with the likes of Tony Bennett and James Taylor, Amy presents a captivating collection of beautiful reflections on life, love, and faith. ^Includes Never Before Published Lyrics to New Songs ^Rendered with the lyrical insight we see in her music, Amy reflects on the pieces of
-Publisher

There you go making mountains
Out of such a little hill
Here I go mixing mortar
For another wall to build
There’s a struggle in this life we lead
It’s partly you
It’s partly me, but

Here we stand in the middle
Of what we’ve come to know
It’s a dance, it’s a balance
Holding on and letting go
But there is nothing that we can’t resolve
When love’s at stake
When love’s involved, ’cause

I can’t remember the first time my parents took me to the ocean. I’m the youngest in my family, and beach vacations were already a tradition in our household by the time I was able to travel—by car, of course. Just hearing the word vacation now conjures up memories of those overnight drives–my dad preferring to travel through the night while my sister Carol and I slept in the backseat. I can still hear the sound of my mother’s unscrewing of the thermos lid and pouring Dad another cup, the comforting smell of black coffee wafting through the car. The quiet of the lonesome highway.

Summer weeks at the beach have been part of every stage in my life; throughout all the changes of many years, the oceanfront constants—drip castles, body surfing, people watching, long walks, soaking in the heat—remain.

I’ve collected starfish, sand dollars, more shells and pieces of sea glass than I can count, and even rescued a baby octopus a time or two. An old friend and I have often reminded each other that there’s not much a little salt water can’t cure, whether from the Gulf or the Atlantic or a bucket of tears.

Before I developed my current shark phobia, I couldn’t just sit and watch the water. I had to be in the salt, in the sand, with green slime and crushed coquina shells stuck in the lining of my bathing suit. Those waves have rolled me up in a ball and sent me crawling on my hands and knees out of the surf and onto the sand, hoping my bathing suit was still intact. I have watched the sun rise and set on the ocean, many oceans, across many seasons. I’ve watched the water by starlight, marveling at the fluorescent green breakers at midnight. Watched it in the heat of the day. Listened to its crashing roar that I love so much. I am drawn to it and afraid of it. It reminds me of the power of God’s creation, and nobody has to explain it to me. Nothing about it is diminished in my absence.

I inherited by marriage three nieces, who by the time they were almost in high school had never seen the ocean. I couldn’t believe it. They had seen it in National Geographic magazines, seen it on postcards, seen it on television, the intro to Hawaii Five–O. But not the real deal. I quickly developed a plan to change all that—a place to stay, a car full of gas, and a map. We made it a girls’ trip, my nieces, their moms, and me.

The old Highway 98 into Destin, Florida, runs along the beach for a few miles. Like the way many of the old beach towns are set up, Destin features the ocean on one side of the highway and all the places to stay on the other. After a seven–hour road trip, we drove into town toward the end of the day. The afternoon sun was shining. The sky was a brilliant blue.

I made the girls promise not to peek across the highway. I suggested we drop our bags, put on our clothes for dinner, and go see the ocean. By then it was sunset.

An old wooden walking bridge crossed over the highway between our parking lot and the beach. My heart was pounding. I got to be the lucky one to make this introduction: “Close your eyes. You’re not going to believe this.”

With eyes closed, my nieces held the handrail, climbed the stairs, and walked across the length of the bridge. We could hear cars passing under us, but above it all, the insistent sound of the surf. When we got to the beach side of the bridge, I said, “Open your eyes.”

There was water and sky as far as the eye could see. The last purple glow was fading on the far right edge of the horizon. The wind was whipping our hair, filling our senses with the primitive smell of salt and sea.

The girls started laughing and shouting. The postcards hadn’t done it justice. Television and surround sound–they didn’t even come close. The next thing I knew, those three girls ran down the other side of the steps, across the sand, and straight into the water with their dinner clothes on. The pull was irresistible.

Salt water is the greatest component of our world, yet some people have never seen an ocean. That doesn’t change the ocean. It is constant and powerful, and like the love of God, whether we’re immersed in it, standing on the shore, or a thousand miles away, it remains.


LEAVE IT ALL BEHIND

Think it was yesterday I called you on the phone
You say you need a change, I recognize the tone
Buy me a ticket please, to anywhere I’ll go
I’m not saying what is right or what is wrong
I’m just thinking you’ve been hanging here too long

So, why don’t we just up and leave it all behind?
Maybe a change would ease your mind
For a time, leave it all behind
What I really want to do is see you smile
Hear you talk and let me listen for a while
There’s too much going on to keep it all inside
You try to whisper, but you start to scream and shout

One winter day when my ten-year–old daughter, Sarah Cannon, was home from school, I decided to take her with me to look at an old horse that was for sale. My sister Carol and I had a horse when we were younger, and I’m always trying to whet my kids’ appetites for things we can do together at the farm.

Sarah was a prime candidate for being a full–fledged horse lover. She just needed a little more confidence around them. I guess riding lessons could have been an option, but neither of us likes to have our time all planned out. I thought if we found a horse that was already dead broke, then we could just trail ride whenever we wanted to. Sarah wasn’t as keen on the idea as I was, but she drove with me and our friend Leigh Ann to a farm in Leiper’s Fork where Jack was a school pony. Leigh Ann is my oldest friend. When we were kids, we lived across the street from each other, and now we own property side by side out in the country. We’ve always enjoyed riding together, but Leigh Ann turned into the real horsewoman. She’s the one who found Jack.

Sarah never did get on to ride that day. She wasn’t feeling well, and I knew I was forcing it a little bit. But I rode. Jack was a Steady Eddie. He was rust colored and shaggy, and I thought he was perfect. We went through the paces in a sand pen, round and round, as Sarah watched from the fence.

Little by little Jack did grow on Sarah. He had an easy canter, and at the farm I’d see her stretch out on his bare back and close her eyes, her face to the sun. She and I never became the big trail-riding duo that I dreamed we would, but we did a little camping and more riding than we would have done without Jack.

When spring came around and all his shaggy hair fell out, we discovered that Jack had a brand on his right shoulder. He had been a workhorse on a ranch out west before he came to Tennessee, and the brand was just two letters, SC. Jack was already Sarah’s, but now that we knew he was branded with her initials, it seemed mysterious and wonderful that he belonged to her. Those scarred letters confirmed what was already true.

We have a way of branding each other, of branding ourselves. “He’s dependable” or “She’s flaky.” I brand myself every morning when I wake up and look in the mirror. You’re puffy…not puffy…Getting older… I see gray hairs. You know the drill. In a culture that worships youth and beauty, the process of aging, even gracefully, is not the feel–good experience everyone is looking for.

I’ve decided it’s time to start reminding myself of some other words that are true. Today as I was brushing my teeth, I saw my reflection in the mirror…no contacts in yet, so I looked softer around the edges. Before my mind started assessing the toll of time, I spoke in an early morning whisper to my forty–six–year–old reflection: “You are made in the image of God. You are the salt of the earth. You are like starlight shining out in the darkness. You’re the light of the world.”

What is it about these words that is so mysterious and powerful? I am just repeating what has already been said. What is already true.