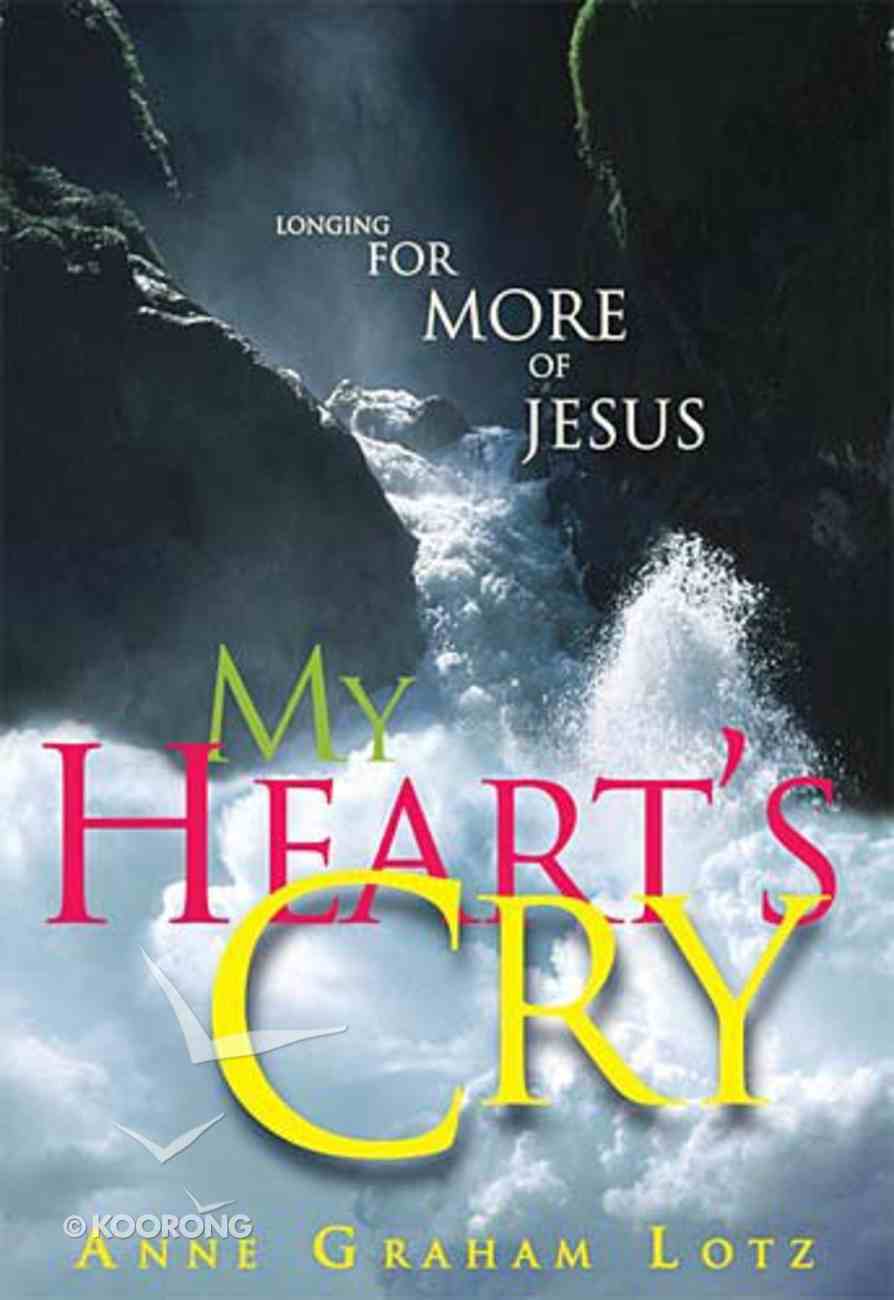 The Way of the Wild Heart: A Map For the Masculine Journey (Unabridged, 9 Cds)
John Eldredge, Kelly Ryan (Narr)
CD

With love and foresight, Jesus poured his life into His disciple, preparing them for the trials they would face, the work they would do, and the blessings that would flow through them for all generations to come. Those riveting lessons, shared with passionate intensity as the disciples were desperately clinging for more of Jesus at the end of His time on earth, are as important for us today as they were for the disciples so long ago. In My Heart's Cry, gifted Bible teacher and acclaimed revival speaker Anne Graham Lotz shows how saturating your life with more of Jesus can bring you the key to achieving victory over life's adversities, discovering hope in your grief, switching on the light in the "darkness" of your life, and making your service to God more faithful. In this audiobook, recorded live at The Cove in North Carolina, you'll learn how having more of Jesus in your life leads you into a world of unparalleled privilege.
-Publisher

""It knowing Jesus] will never be enough until my faith becomes sight and I know him as fully as I am known. I find that my yearning for Him is ravenous and it has once again led me to immerse myself in the pages of His Word-in particular, the eyewitness account of His life and ministry that was recorded by the disciple with whom I most identify-John."" -Anne Graham Lotz ^Long heralded by Billy Graham as the "best preacher in the family," Anne Graham Lotz draws new insights from passages containing Jesus' teachings to his disciples toward the end of his earthly ministry when the disciples were trying to cling to Him most. Anne writes, "I wanted to know what He had to say to those who were desperate for more of Him." ^Anne focuses each chapter on a passage from the last half of the book of John and features a corresponding life application. Chapter titles will include x2026; His Voice in My Ears, His Tears on My Face, His Praise on My Lips, His Death in My Life, His Dirt on My Hand
-Publisher


God told me to tell you that you are supposed to marry me." I received that astonishing bit of information on a lined sheet of notebook paper that had food stains on it when I was fourteen years of age! It was a personal letter to me from some delusional young man that had been forwarded from my father's organization. I remember writing back rather crisply, "Well, He hasn't told me!"


As amusing as that incident was, a similar attitude was conveyed to me at the beginning of my ministry that was not so humorous. Some church leaders publicly expressed disapproval of my ministry because I was willing to speak when there were men in the audience. And their stand was based on what they said God says.


A typical argument from one of these men was something like this: "God told me that you as a woman are not to speak to an audience in which there are men. God has also told me women are not to be preachers."


My initial reaction was the same as it was when I was fourteen: "Well, God hasn't told me!" But because this argument was made by those with seminary degrees and reputations for being spiritual, by godly men who held positions as shepherds in their congregations, this little sheep needed to hear her Shepherd's voice. I did not want to hear what others said He said. I wanted to hear from Him directly. I wanted to hear His voice in the ears of my spirit.


Do you have a similar dilemma in your life? Have you been confronted with those who, in essence, have said, "God told me to tell you if you only had more faith, you would be healed," or "If God really loved you, that bad thing would not have happened to you," or "It's God's will that your loved one died"? Such "words of knowledge" spoken by sincere people within our circle of Christian friends can put us in a tailspin of emotional devastation and spiritual doubt. It is especially traumatic and confusing when those words are uttered by someone in a position of religious leadership.


How can you and I know which voice speaks the truth and is therefore authentic?


The Bible tells us that God does speak to His children and that we will hear and know His voice even as sheep hear and know the voice of their shepherd.


In Western civilization, the concept of a personal shepherd is relatively meaningless. With hoof-and-mouth disease in the news, we've seen British sheep ranches flashed on the news and sheep pens in Northern Ireland pictured on the front of our morning newspapers. If you live in a rural area, you may have noticed that sheep today graze in carefully fenced-in pastures where they're guarded by specially bred dogs and identified by a number tattooed in their ears. Computers track when they are born and when they are ready for either shearing or slaughter. There is no personal shepherd. Unless the sheep are on a very small farm, even the sheep's owner can't tell one animal from another.


But the Eastern shepherd was, and in many parts of the world still is, very different. He raised his sheep from the time they were lambs and maintained responsibility for them twenty-four hours a day, seven days a week, year in and year out, for the sheep's entire lifetime. There were no dogs or fences or tattoos or computers.


The Eastern shepherd of Jesus' day raised his sheep primarily in the Judean uplands. The countryside was rocky, hilly, and creased with deep crevices and ravines. Patches of grass were sparse. So the shepherd had to establish a personal relationship with each sheep, nurturing its love and trust in him in order to lead it to where the path was the smoothest, the grass was the greenest, the water was the cleanest, and the nights were the safest. The shepherd always led the sheep. He knew their names, and when he called them, they recognized his voice, following him like a swarm of little chicks follows the mother hen. When he stopped, the sheep huddled closely around him, pressing against his legs. Their personal relationship with him was based on his voice, which they knew and trusted.


The Bible describes our relationship with Jesus as being similar to the relationship between the Eastern shepherd and his sheep-a relationship based on His voice. And make no mistake about it, His voice is God's Word, the Holy Bible.


The Authentic Voice is Biblical
God speaks primarily through the Scriptures, and at times, through other people-which is where we must be careful. One of the most familiar teachings of Jesus is one He launched into after a confrontation with the "shepherds," or religious leaders, of His day who professed to speak for God. John recorded that the confrontation had taken place after an incident involving one of the many blind beggars in the city.


Jesus had been walking through the congested streets of Jerusalem when His attention was caught by a beggar who had been born blind. Stopping, Jesus had patiently explained to His disciples and to the man that the blindness was the result of no one's fault. Instead, it was an opportunity to reveal the glory of God. The resulting display of God's glory as Jesus created sight in eyes that had never seen before should have caused everyone, including the religious authorities-especially the religious authorities!-to fall at His feet in worship. Instead, it provoked a confrontational exchange between the man and the religious leaders that resulted in the man's excommunication from the temple. Try to enter into the drama of the former blind beggar's experience:


In one day, the former blind man's life had turned upside down and inside out. As he must have wandered in a daze through the narrow, crowded streets, surely he tried to comprehend all he had experienced, realizing that although he had gained his physical sight he had lost any social acceptance he would ever hope to have. Did he wage an almost superhuman battle to force his attention away from all he was seeing for the first time to all the thoughts he was thinking for the first time? And where would he go? Back to the alleyway where he had begged all of his life? Back to his home where his parents resented the disgrace he had brought on the family? Back to his "friends" who had turned him over to the authorities in the first place? Since he had received his sight, not one person had congratulated him or shaken his hand or slapped him on the back or even smiled joy and approval. Having lived in a world of darkness all of his life, surely he had never felt so alone as he did in the light.


Until he heard that familiar voice. It was coming from an ordinary-looking Man standing in front of him-


As the former beggar heard the voice he would never forget, did his heart leap? Did his newly focused eyes cling to the Man's face, drinking in every detail, listening to every syllable, as the Man gently inquired, "Do you believe the Son of Man?" Eagerly the man responded, "Who is he, sir? . . . Tell me so that I may believe in him."


Jesus then gave a scathing condemnation of the Pharisees who had stood in judgment over the man and were still hounding him. He declared that the man who had been blind could now see, not only physically, but also spiritually because he recognized Jesus as the Son of God and placed his faith in Him. But the Pharisees, who claimed with all of their religious training and knowledge and experience that they could see spiritually, remained blind because they rejected the truth of Who Jesus is (9:39-41).


The haughty, superpious, elaborately dressed Pharisees who had slipped through the temple courtyard to spy on the beggar caught him in conversation with Jesus. So Jesus used what was inevitably another imminent confrontation with the religious leaders to make a point that I believe needs to resonate in the ears of Christians today. With eyes that surely flashed with righteous indignation, and with the same breath that indicted the religious leaders for their spiritual blindness, Jesus warned His followers that not all religious leaders, or "shepherds," were authentic.