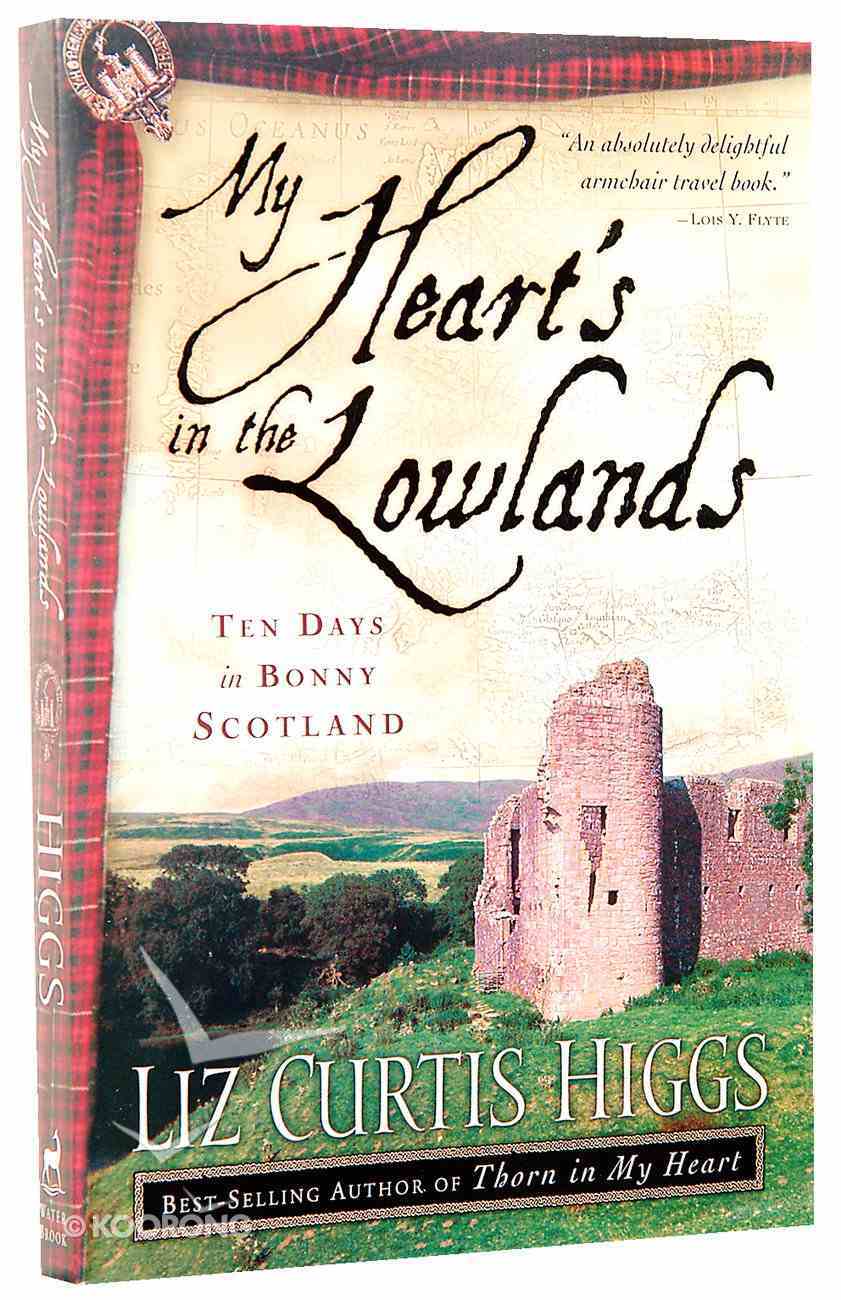 My Heart's in the Lowlands

Join bestselling Christian novelist Liz Curtis Higgs for an armchair tour of Scotland's South West, the setting of her much-loved historical romances. Liz will whisk you away to the quaint villages and crumbling castles of this enchanting region!

Not Quite Home: A Journey in Mission
Steve John
Paperback

Join bestselling Christian novelist Liz Curtis Higgs for an armchair tour of Scotland's South West, the setting of her much-loved historical romances. Liz will whisk you away to the quaint villages and crumbling castles of this enchanting region!

"Let's "go, " shall we? Just the two of us?" ^""I consider Galloway the country's best kept secret: a place where time holds its breath, where ancient ruins dot the countryside in moss-covered splendor, where the natives are friendly and tourists are few, only because they don't know what they're missing. ^"So, ten days in bonny Scotland. You'll join me, aye?"^"-from "My Heart's in the Lowlands" ^Best-selling novelist Liz Curtis Higgs invites you to take an entertaining journey through the South West of Scotland, known as Dumfries and Galloway. Without crossing the pond, changing time zones, or driving on the left side of the road, you'll explore quaint villages and crumbling castles, old bookshops and charming tearooms in the delightful company of a guide whose love for this quiet nook of Scotland illuminates every page. ^The verdant hills and glens of the Lowlands are awash in history, rich with culture, and peopled with engaging characters. The setting for Higgs's acc
-Publisher

AN INVITATION
But first, before you see heaven’s glory,
May ye get mony a merry story. - Robert Burns

Liz, are you off to Scotland again?”
I blush to confess it. Aye.
At first everyone understood. “Doing research for your novels,” they said. Who wouldn’t enjoy seeing the land of Braveheart and Rob Roy? But when my visits became an annual pilgrimage, when every spare penny and frequent-flier mile was earmarked “Glasgow,” when I had to build more bookshelves to hold all my treasured tomes from you-knowwhere, one fact became abundantly clear: Scotland had captured my heart and was not about to let go.
So…let’s go, shall we? Just the two of us?
Rather than running breathlessly from one end of the country to the other, we’ll take a leisurely turn around South West Scotland, known as Dumfries and Galloway. Many travelers bypass this quiet corner, eager to experience the stark beauty of the Highlands—a sight worth seeing, to be sure. But I consider Galloway the country’s bestkept secret: a place where time holds its breath, where ancient ruins dot the countryside in moss-covered splendor, where the natives are friendly and the tourists are few, only because they don’t know what they’re missing. So, ten days in bonny Scotland. You’ll join me, aye?
May is the best month for a leap across the pond. The sun rises by five and tarries past nine, providing ample time to wander down every footpath that beckons. The air is scented with lilacs. Month-old lambs gambol along the hedgerows, and the rolling hills and glens are covered with the greenest grass you can imagine. I’m on tiptoe just thinking about it.
Don’t worry about the driving; a steering wheel on the right side of the car and traffic on the left side of the road feel perfectly natural to me. Besides, in May we’ll have the place to ourselves. Students are still in school, and most tourists wait for summer. English sightseers, however, barrel up the M6 motorway on the weekends, so we’ll plan to arrive on a Sunday and depart on a Tuesday. That will give us lots of weekdays to poke about the village shops and explore half a dozen castles and linger over pots of tea and nibble on scones and… Oh, is it May yet?

Glasgow Bound
It’s always May, if only in our hearts. Our Continental flight leaves in an hour, and the passengers in the gate area are growing restless. The novel stuffed in my purse remains untouched, yet my plane ticket has been consulted many times. Still safely in place. Still a 7:50 p.m. departure.
Behind us, a Glaswegian woman scolds her teenage sons for wandering off. “Eejits!” she fumes. “Are ye daft?” I duck my head to hide a smile and see you do the same. No matter the dialect, a mother’s words are universal. When the first wave of passengers begins to board, we gather our belongings and follow the herd, trying not to be envious of all that legroom in the business-class cabin. No matter. Business or coach, high road or low road, we’ll all be in Scotland afore long. Truly, that’s all that matters.

“Why Scotland, Liz?”
I’m asked that question so often I really should have a snappy answer at the ready. “Because it’s the loveliest place on earth” is a beginning. “Because I’m fascinated by the country’s history” offers some justification.
“Because men in kilts make my heart skip a beat” may be true, though it’s the skirl of a lone bagpipe that brings a lump to my throat. Crawfords and Walkers, two fine Lowland names, grow in my family tree, but we’ve yet to find our roots definitively planted in Caledonian soil. How then to explain my abiding affection for Scotland, a country small enough to fit inside the state of Indiana with room to spare?
Perhaps because when I’m there, I have a sense of rightness, of completion, of belonging.
The verdant, rolling hills remind me of places I’ve lived—eastern Pennsylvania and central Kentucky in particular—yet the angle of the sun falling across the Lowland moors is uniquely Scottish. That slanted light works a kind of magic on me. The misty air softens my complexion. Sleep comes easily. Contentment seeps into my bones. I bite into a freshly baked oatcake, covered with a generous slice of sharp Galloway cheese, then sip milk-laced tea, hot enough to numb my lips, and I’m within walking distance of heaven.
I’ve felt this way since May 1996 when I first crossed the English border, driving north from Manchester Airport, and was greeted by a sign shaped like an arched door bearing a regal red lion and a single word in bold letters: SCOTLAND. I parked on the shoulder of the road, hands trembling as I photographed the sign, and then I wept with joy.
Home, home, home.
A good friend of mine feels the same way about Italy, and another adores a certain island in the
Caribbean. For me, it will always be Scotland— Galloway in particular. The musical lilt of a Lowland
accent never fails to boost my spirits. I’m simply, deliriously happy there. I suspect you share my passion for all things Scottish, or you wouldn’t be traveling with me now, bound for a distant kingdom.Bless you for coming, my friend.

Counting the Hours
As we settle into our coach-cabin seats, the screen in front of us displays a map of the eastern half of the United States and the western half of Europe, with a dotted line showing our intended route arching over New England before heading out to sea. We’ll cover a daunting number of miles tonight: more than three thousand. Had fictional Jamie McKie, the hero from my Lowlands of Scotland novels, sailed across the Atlantic in the late eighteenth century, the crossing would have taken two months. Hard to fathom we’ll cover the same distance in mere hours. Dinner, such as it is, will come and go soon after takeoff. Might be a good idea to set our watches on Glasgow time—five hours later than New York—if only to remind us it’s already 1:00 a.m. where we’re headed. Sleep is a must, or we’ll spend our first day in a jet-lagged stupor.
I gaze out the window as we taxi from the gate, anticipation thrumming inside me. In little more than six hours we’ll begin our descent over the Firth of Clyde and across the hilly moors of west Renfrewshire, a bolt of green velvet undulating beneath our wings. Unless it’s a foggy morning, the sun will be shining in our pilot’s eyes when the wheels meet the runway with a firm bounce and the flight attendant announces our arrival at Glasgow International Airport.
Sleep? Who am I kidding? We’re flying toward Scotland. We’re flying toward dawn.

The sky was a luminous dark blue with a faint pattern of clouds. As Leana watched, the color changed to turquoise so gradually she could not discern how or when it happened. Yet when she looked down for a moment to brush a leaf from her lap, then looked up again, the sky was lighter. And fading to gray.
Leana heard footsteps. Then Jamie’s voice. “’Tis a beautiful sight first thing in the morning.” --Whence Came a Prince