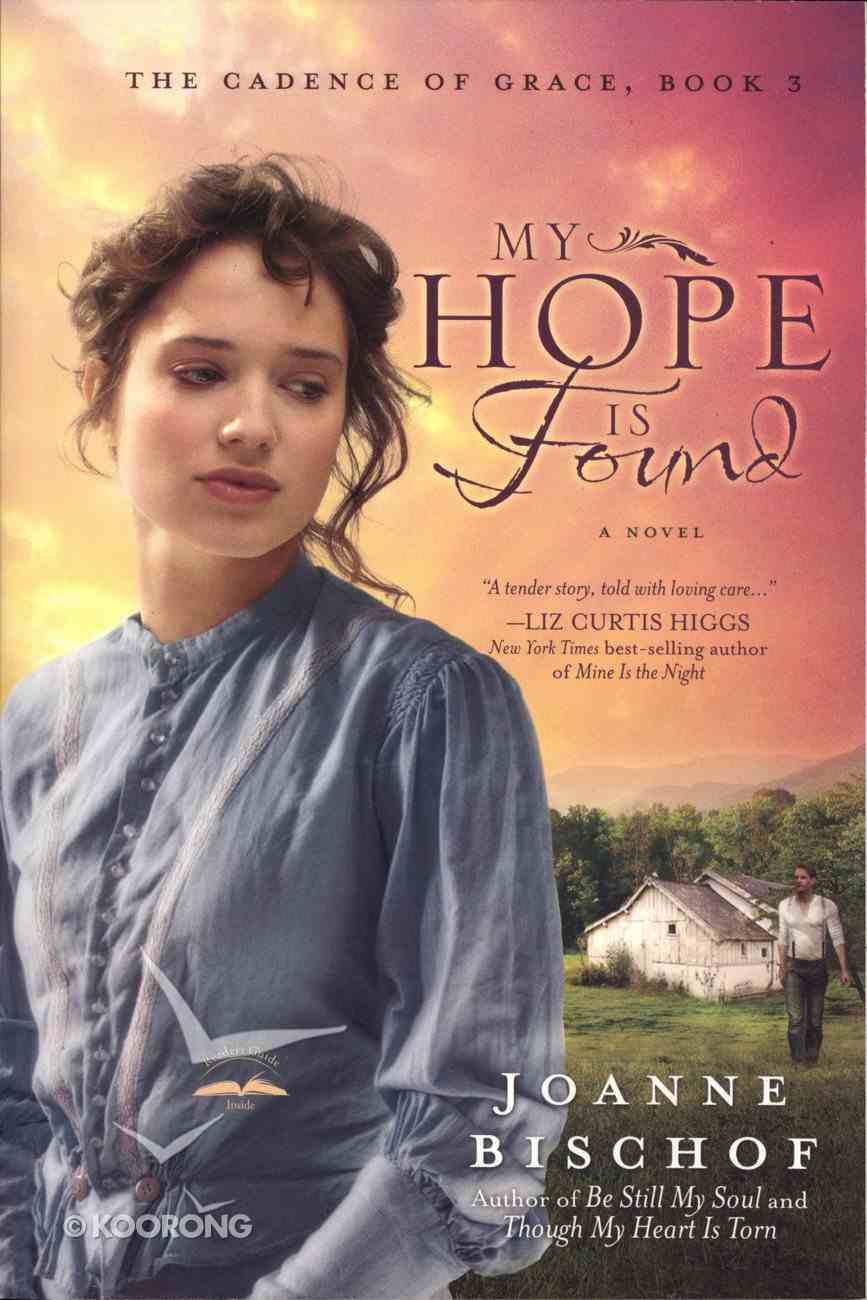 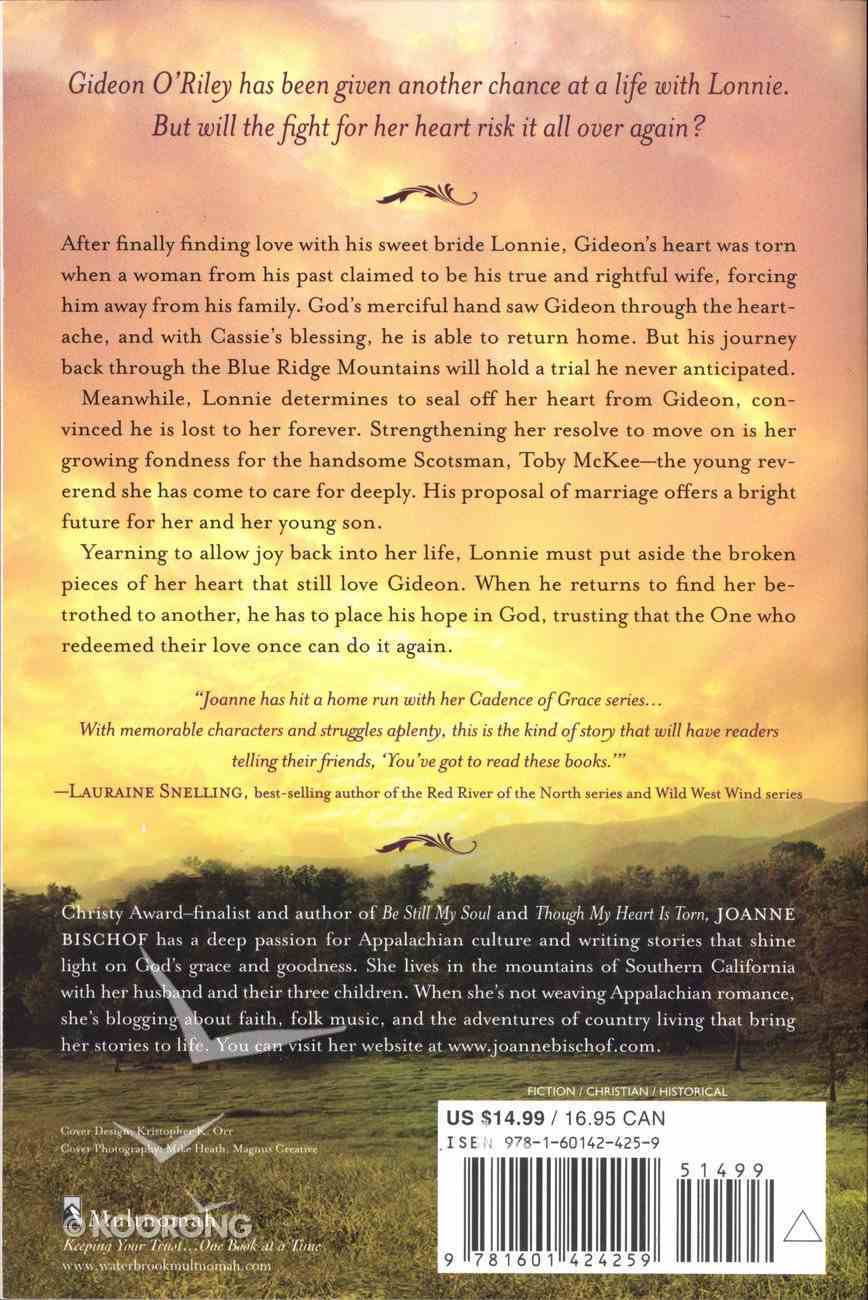 My Hope is Found (#03 in The Cadence Of Grace Series)

Gideon O&rsquo;Riley has been given another chance at a life with Lonnie. But will the fight for her heart risk it all over again? &#160;&#160; After finally finding love with his sweet bride Lonnie, Gideon&rsquo;s heart was torn when...

Gideon O&rsquo;Riley has been given another chance at a life with Lonnie. But will the fight for her heart risk it all over again?
&#160;&#160;
After finally finding love with his sweet bride Lonnie, Gideon&rsquo;s heart was torn when a woman from his past claimed to be his true and rightful wife, forcing him away from his family. God&rsquo;s merciful hand saw Gideon through the heartache, and with Cassie&rsquo;s blessing, he is able to return home. But his journey back through the Blue Ridge Mountains will hold a trial he never anticipated.
&#160;
Meanwhile, Lonnie determines to seal off her heart from Gideon, convinced he is lost to her forever. Strengthening her resolve to move on is her growing fondness for the handsome Scotsman, Toby McKee&mdash;the young reverend she has come to care for deeply. His proposal of marriage offers a bright future for her and her young son.
&#160;
Yearning to allow joy back into her life, Lonnie must put aside the broken pieces of her heart that still love Gideon. When he returns to find her betrothed to another, he has to place his hope in God, trusting that the One who redeemed their love once can do it again.

&ldquo;Joanne has hit a home run with her Cadence of Grace series&hellip; With memorable characters and struggles aplenty, this is the kind of story that will have readers telling their friends, &lsquo;You&rsquo;ve got to read these books.&rsquo;&rdquo;
&mdash;Lauraine Snelling, best-selling author of the Red River of the North series and Wild West Wind series
-Publisher

Go home to them.

With Cassie&rsquo;s words fresh in his heart, Gideon stepped from the woods. The sun hit his shoulders. Warm as a caress. His suspenders bounced around his legs. They&rsquo;d been abandoned halfway through his trek. Overwhelmed by the reality of what the day would bring, he&rsquo;d dressed in a hurry, hungry for the sanctuary of these woods. Gideon ran a hand over the back of his neck where the stiff muscles complained. A bachelor once more, he&rsquo;d bunked out in his shop the night before, leaving Cassie alone in the house.

Though he&rsquo;d had both pillow and blanket, sleep had been lost to him.

With his thoughts ricocheting between Lonnie and Cassie, his past and future seemed muddled. A coil of tangled wire. Rifle slung over his shoulder, Gideon circled his thumb over the smooth wood of the gunstock, the sound of birdsong paving the way to the cabin. Cassie&rsquo;s cabin&mdash;a place he would no longer call home. But it really never had been. He chewed the inside of his cheek. Where was home now? He knew the answer. There was only one place for him, and that was beside Lonnie.

Saying good-bye to Cassie should be simple. Especially since Lonnie and Jacob were waiting on the other side. So what was he doing out on a cold morning checking traps? Gideon straightened and gripped his catch, wishing with all his heart that it could be more for Cassie. That it could be better. Her words pressed against the edges of his mind.

&ldquo;I want this chance to do something right. Go home to them.&rdquo;

And here he was, leaving. With a puff of his cheeks and a duck of his head, Gideon walked on. Surely God had been smiling down on him the night Cassie had spoken those words only days ago. She didn&rsquo;t have to let go. But she had. He chalked it up to grace and nothing less. Of her own free will, she was letting him go home. Return to the life he once had. The life with his young bride and son. Gideon&rsquo;s chest tightened at the thought of taking Lonnie and Jacob in his arms.

He prayed that someday he might extend the grace that Cassie had extended to him. The thought filled him with wonder. Wonder at what it would feel like to have the peace that Cassie felt when she stepped out in faith. In goodness. For in keeping her word, she&rsquo;d given him his future. Which was why he&rsquo;d slept fitfully until dawn, overwhelmed by it all.

He clutched the rabbits tighter. A warm spell had turned the snow to mush, making his steps easy, but the trail was no match for his attention compared to the truths that roiled in his mind.

He was leaving today. Though it could take weeks before he got word that all was finalized between Cassie and himself&mdash;just as it should have been long ago&mdash;he couldn&rsquo;t stay with a woman who was no longer his wife.

Gideon shook his head and strode toward the cabin. Soon he&rsquo;d be on his way to Elsie and Jebediah Bennett&rsquo;s farm, to his family. In a week&rsquo;s time, he would stand before Lonnie. Pulse racing, he nearly lost his grip on the rabbits&rsquo; feet. Gideon tilted his face to the sun, the joy of it all warming him as much now as it had then.

Rounding the bend, the smell of coffee all but pulled his feet along. He spotted the small cabin nestled against a stand of oaks. Gideon rolled his shoulder that ached in the cool weather and stomped up the steps, spying Cassie in the kitchen window. The house was bright and warm when he stepped in. His pack, filled with all that he owned, sat beside the door. Cassie was at the stove, her braid long and dark down her back.

She glanced at him, her face registering amusement. &ldquo;I thought you&rsquo;d be gone.&rdquo; She watched him as he sifted through her crock of knives. &ldquo;You were going to leave at first light.&rdquo;

&ldquo;But&hellip;&rdquo; She glanced at the rabbits.

He found the knife he was looking for, grabbed her worn pan, and flicked his head toward the porch. He lifted the rabbits. &ldquo;I&rsquo;ll be right back.&rdquo;

&ldquo;Gideon.&rdquo; Her hand on his arm made him freeze. &ldquo;I can do this on my own. All of it.&rdquo; Her expression drove her implications deeper.

Nodding slowly, he stepped onto the porch. Sitting, he nestled the pan between his feet on the lower step. She moved in beside him and sat. Her patched skirts swayed soundlessly over her small boots. He sensed a weariness in her flushed cheeks. Though the scarlet fever had long since left her body, her strength was slow in returning.

He nodded. &ldquo;I know. I&rsquo;ll be off in a bit.&rdquo;

Hands pressed together, she seemed unsure of what to do with them. &ldquo;How did you sleep?&rdquo;

He glanced over in time to see her faint grin.

&ldquo;That shack had to be freezing, and you scarcely had enough blankets.&rdquo; She touched the toes of her boots together.

&ldquo;I&rsquo;d say it was best that way.&rdquo; He peered across the farm to where her brothers&rsquo; hammers could be heard over the quiet of late morning.

Cassie smirked, but her eyes seemed sad. &ldquo;Is that so?&rdquo; She gave him the look that had made him weak in the knees on more than one occasion. &ldquo;After months of sleeping in the rocking chair, you would have suddenly had the notion to take me in your arms?&rdquo; She elbowed him softly. &ldquo;You do realize you never even kissed me proper.&rdquo;

Feeling a half grin form, Gideon ducked his head.

Her blue-eyed gaze shifted away, over the farm, as if the fallen petals of their lives were scattered about. &ldquo;Well, the rumors will abound regardless.&rdquo;

That they would. He and Cassie had been married for months, and people would think what they wanted. It wouldn&rsquo;t help that his reputation around Rocky Knob was anything but saintly. Hands stilling in their work, he studied her, his heart aching afresh. &ldquo;What will you do, Cassie?&rdquo; How he wished he could shoulder this burden for her.

With a wave of her hand, she tossed his concerns aside. &ldquo;There&rsquo;s more to this world than Rocky Knob. I&rsquo;ve got a mind to start fresh. Maybe I&rsquo;ll head to Stuart. Farther, Lord willing.&rdquo;

That spark glinted in her eyes&mdash;fire and determination&mdash;and he knew she was going to be all right. The breeze lifted loose strands of her hair, sending the molasses-hued ribbons dancing.

Slowly he shook his head, overwhelmed. Through her grace, another burst of joy shot through him. He would see Lonnie again. He would hold his son. Watch him grow up. Memories of them had hung like dusty pictures in his mind, but soon he would add new memories. It was a gift he could never repay Cassie for.

Throat suddenly tight, he could only nod in return. He rose and, setting the pan aside, dipped his hands in the wash bucket.

She motioned toward the open door and his pack just inside. &ldquo;Will you be bringing nothing else? What about everything in your shop? all your tools?&rdquo;

&ldquo;Give them to Jack. He&rsquo;ll make good use of them.&rdquo; He scrubbed at the creases in his palms, thankful for the friend he&rsquo;d found in Cassie&rsquo;s youngest brother. He ran the icy water up his forearms, then grabbed the tattered towel.

Her expression grew so soft, he warred with the urge to cup her cheek as he once had.

&ldquo;He&rsquo;s a good kid.&rdquo; He struggled to find more meaningful words, but his gratitude for the young man&rsquo;s kindness ran deep.

Eyes down, Cassie leaned against the railing. She crossed her ankles, then uncrossed them. Gideon dried his hands on the towel longer than need be.

She stomped her foot. &ldquo;Off with you now. I can&rsquo;t take this.&rdquo; She waved him toward the steps as if to set him in motion. &ldquo;You&rsquo;re like a stray dog that won&rsquo;t leave.&rdquo; She quick-swiped at her damp cheeks.

He laughed, the sensation filling the empty spaces of his heart.

She wiped her cheeks again. Gideon captured her hand as it fell. He squeezed it, letting his thumb trace a slow circle on her wrist.

Without meeting his gaze, she spoke, her voice as soft as he&rsquo;d ever heard it. &ldquo;Please don&rsquo;t say good-bye. I don&rsquo;t think I could handle it.&rdquo;

Gideon swallowed the lump in his throat. &ldquo;Fine, then&hellip;&rdquo; Cupping the back of her head, he pressed a kiss to her forehead. &ldquo;You&rsquo;re wonderful,&rdquo; he whispered against her hair.

Cassie choked out a laugh. &ldquo;And you&rsquo;re a scoundrel.&rdquo;