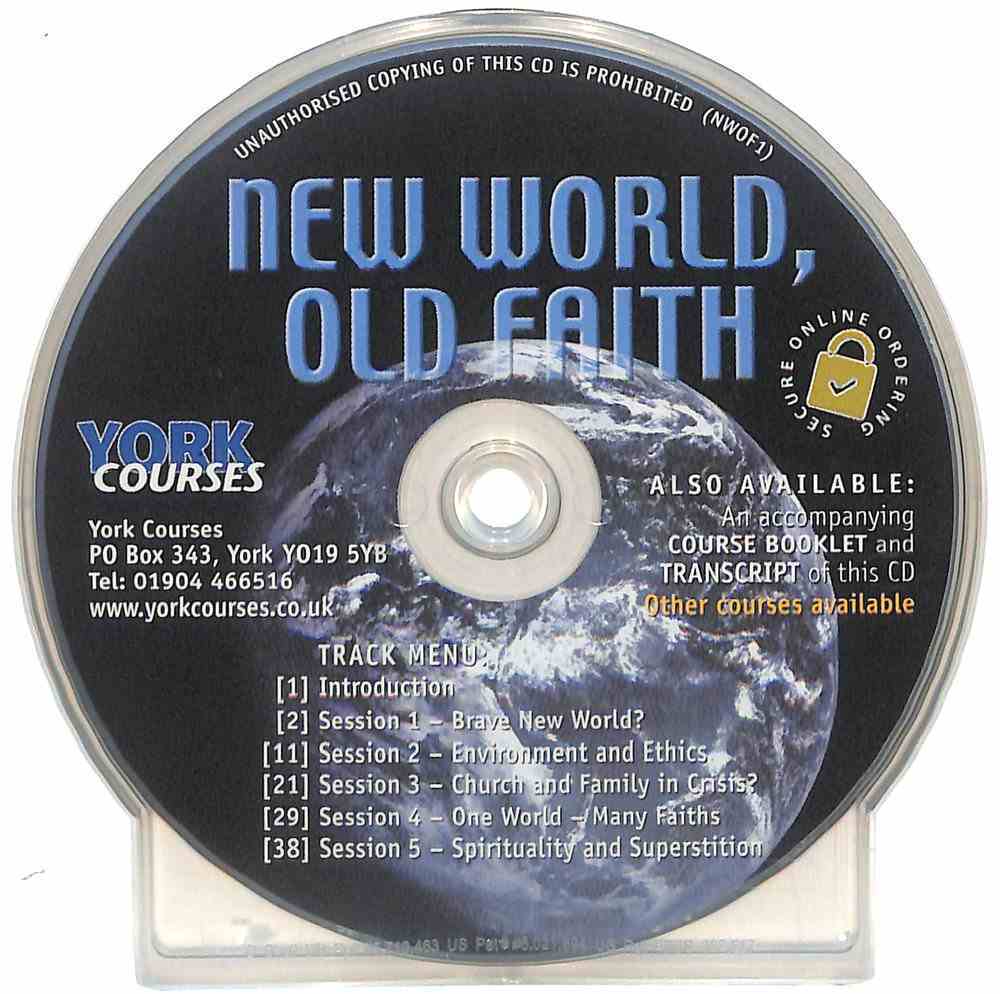 A 5-session ecumenical COURSE for discussion groups - IDEAL FOR LENT or any time of year New World, Old Faith looks at how Christian faith continues to shed light on a whole series of issues in our changing world,...

New World, Old Faith looks at how Christian faith continues to shed light on a whole series of issues in our changing world, including change itself. An essential course for making sense of faith in the world today.

5 sessions:
1. Brave New World?
2. Environment and Ethics
3. Church and Family in Crisis
4. One World - Many Faiths
5. Spirituality and Superstition

Rowan Williams was enthroned as Archbishop of Canterbury in February 2003. His previous positions include Archbishop of Wales, Lady Margaret Professor of Divinity, Oxford and Dean of Clare College, Cambridge. He has taught theology for more than fifteen years in five continents, worked as a parish priest, and published widely. His previous publications include "Teresa of Avila" (1991), "Open to Judgment" (1994) and "Sergi Bulgakov" (1999).

John C. Polkinghorne (Ph.D., University of Cambridge) is an Anglican priest, past president of Queens' College, Cambridge University, and former professor of mathematical physics at Cambridge. Polkinghorne resigned his chair in physics to study for the Anglican priesthood. After completing his theological studies and serving at parishes, he returned to Cambridge. In 1997, Dr. Polkinghorne was knighted by Queen Elizabeth II for distinguished service to science, religion, learning, and medical ethics. He was the recipient of the 2002 Templeton Prize for One Million $US
He lives in Cambridge, United Kingdom and is the author of 32 books, translated into 18 languages; 26 concern science and religion, often for a popular audience.

Joel Edwards is the General Director of the Evangelical Alliance. This was an historic appointment in 1997 as he became the first black General Director in the Alliance's 150-year history. He previously served as the General Secretary of the African and Caribbean Evangelical Alliance. Joel is also an honorary Canon of St Paul's Cathedral, and has served on the Executive of the New Testament Church of God. Joel and his wife currently worship at their local Assemblies of God church.

David Coffey has been an ordained Baptist Minister with the Baptist Union of Great Britain since 1967. A graduate of Spurgeon's College, London, he served as Pastor of three English churches: Whetstone, Leicester; North Cheam, Sutton; and Upton Vale, Torquay.
He was President of the Baptist Union of Great Britain 1986-87 and in the same period published a book Build That Bridge which is a study in conflict and reconciliation in church life. He served for three years as National Director of Evangelism for the Baptists (1988-91) prior to being appointed as the General Secretary of the Union in 1991. After fifteen years he retired from this ministry in July 2006.


In 2003 he was elected until 2007 as the Moderator of the Free Churches Group to represent the nineteen Free Church denominations in England. In this capacity he also serves as one of the four Presidents of Churches Together in England alongside the Archbishop of Canterbury, the Cardinal Archbishop of Westminster and a representative of the Orthodox churches.


He has a strong commitment to preaching and bible teaching and has published a commentary on Romans in The Crossway Bible Guide series and All One In Christ Jesus: A Passionate Appeal For Evangelical Unity (Authentic)

Uninvited: Living Loved When You Feel Less Than, Left Out, and Lonely
Lysa Terkeurst
eBook