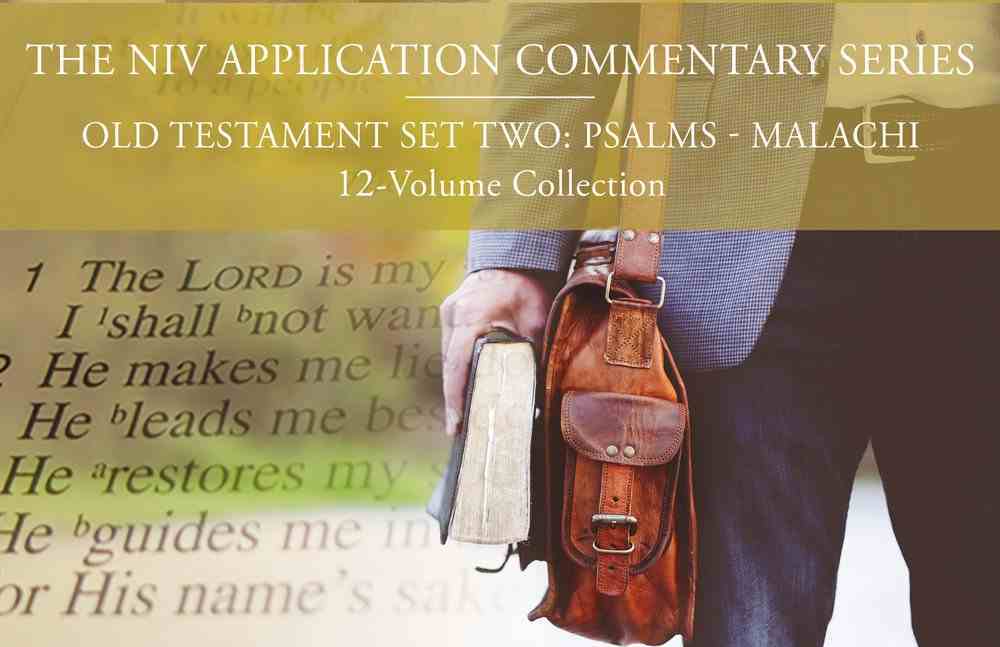 : The NIV Application Commentary helps you communicate and apply biblical text effectively in today's context. To bring the ancient messages of the Bible into today's world, each passage is treated in three sections: Original Meaning ....

Gerald H. Wilson (1945-2005), PhD, Yale University, was professor of Old Testament and biblical Hebrew at Azusa Pacific University. He wrote The Editing of the Hebrew Psalter, The Book of Job in the New International Bible Commentary and Psalms 1-72 New International Version Application Commentary, and numerous articles for journals, encyclopaedias, and reviews.

Dr Jamie Grant (PhD., University of Gloucestershire) studied the Psalms under Gordon Wenham, and is Tutor in Biblical Studies at Highland Theological Seminary near Inverness in Scotland. After studying law at the University of Dundee, Jamie worked for seven years in Poland with the International Fellowship of Evangelical Students. He is the author of The King as Exemplar: The Function of Deuteronomy's Kingship Law in the Shaping of the Book of Psalms and the forthcoming volume Psalms 76-150 (New International Version Application Commentary) replacing the late Gerald H. Wilson, he is also the editor and contributor to the volume The Covenant of God and Words and the Word: explorations in Biblical Interpretation and Bible Theory.
Koorong - Editorial Review.

Dr. John N. Oswalt (Ph.D., Brandeis University) is research professor of Old Testament at Wesley Biblical Seminary in Jackson, Mississippi. He is the author of numerous articles and several books, including the two-volumes Isaiah 1-39, Isaiah 40-66 (New International Commentary on the Old Testament series), Isaiah (NIV Application Commentary), Called to be Holy: A Biblical Perspective and most recently The Bible among the Myths: Unique Revelation or Just Ancient Literature?
Koorong - Editorial Review.

John Andrew (Andy) Dearman (Ph.D., Emory University;Th.D (hon)., Reformed Theological Academy, Debrecen in Hungary ) is director and associate dean for Fuller Texas and professor of Old Testament. Before coming to Fuller, he taught Old Testament at Austin Presbyterian Theological Seminary for 27 years, serving as its academic dean from 1997 to 2003. A respected archaeological researcher, he has held staff positions on archaeological surveys and excavations in Israel and Jordan.


Dearman has written several books, including Jeremiah and Lamentations (NIV Application Commentary series, 2002); The Land that I Will Show You: Essays on the History and Archaeology of the Near East in Honor of J. Maxwell Miller (editor and contributor, 2001); Religion and Culture in Ancient Israel (1992); Harpers Bible Pronunciation Guide (editor and contributor, 1989) and Hosea (New International Commentary on the Old Testament series)


Additionally, he is a part of two ongoing Bible translation projects, contributing to translation for The Voice (Thomas Nelson) and serving as a translation editor for the Common English Bible (Abingdon).
Koorong - Editorial Review.

Iain Provan (PhD, Cambridge University) is Marshall Sheppard Professor of Biblical Studies at Regent College. An ordained minister of the Church of Scotland, he is the author of commentaries on Lamentations and 1 and 2 Kings. A

Worship as It is in Heaven
John A Dickson, Chuck D Pierce
eBook