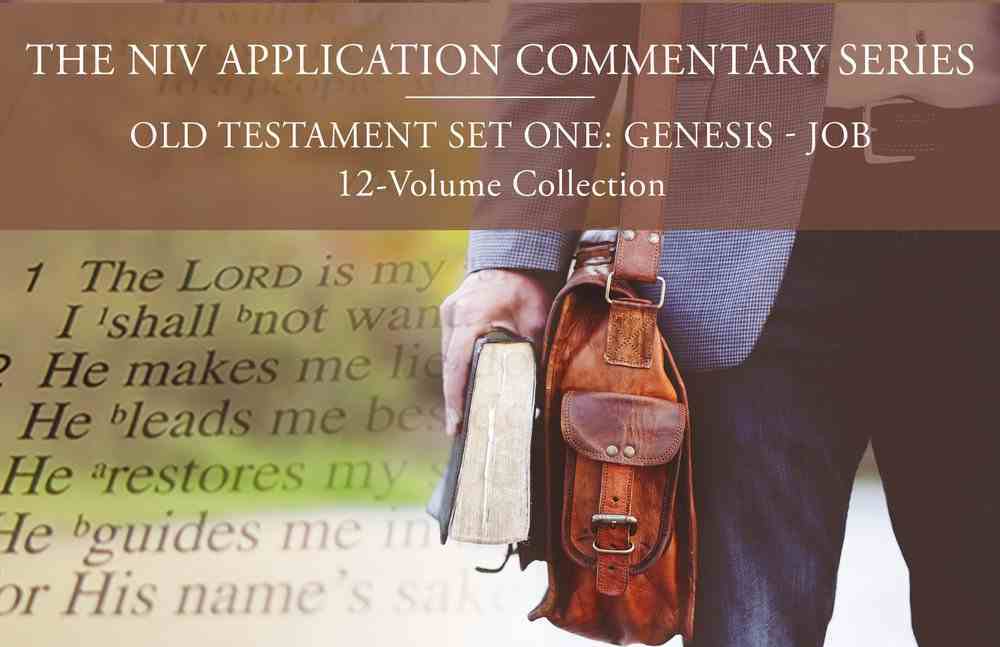 This series helps readers with the vital task of bringing the ancient message of the Bible into a contemporary context. It gives preachers and teachers the tools, ideas, and insights they need to communicate God's Word today.

This series helps readers with the vital task of bringing the ancient message of the Bible into a contemporary context. It gives preachers and teachers the tools, ideas, and insights they need to communicate God's Word today.


Volumes and authors in The NIV Application Commentary, Old Testament Set One: Genesis-Job, 12-Volume Collection include:

Robert L. Hubbard, Jr. (Ph.D., Claremont Graduate School) is Professor of Biblical Literature at North Park Theological Seminary in Chicago, IL. He also taught at Denver Seminary and served as a chaplain on active duty in the United States Navy and in the United States Naval Reserve. Dr. Hubbard is author of The Book of Ruth (New International Commentary on the Old Testament)(Eerdmans, 1988), which received the Christianity Today Critics Choice Award as the best commentary of 1989.
He co-authored Introduction to Biblical Interpretation (Word, 1993), with William Klein and Craig Blomberg, his latest commentaries are The Book of Joshua (NIV Application Commentary) and Esther and Lamentations (New International Commentary on the Old Testament), a series on which he serves as general editor. He is ordained by the Evangelical Free Church of America.
Koorong -Editorial Review.

Andrew E. Hill, (Ph.D., University of Michigan) is Professor of Old Testament at Wheaton College, Wheaton, Illinois where he has held a faculty appointment in the Biblical & Theological Studies Department since 1984. Professor Hill has been affiliated with Robert E. Webber and the Institute of Worship Studies (IWS) since 1992, and has taught "Biblical Foundations of Worship" as an adjunct faculty member for IWS since 1996. He is the author of Enter His Courts with Praise! Micah-Malachi Cornerstone Biblical Commentary, and Daniel (Revised Expositor's Bible Commentary). His other published works include The Old Testament Today, with John H. Walton, 1 and 2 Chronicles (NIV Application Commentary), and Malachi: A New Translation with Introduction and Commentary (Anchor Bible Commentary 25D.)
Koorong - Editorial Review.

August Konkel, PhD (Westminster Theological Seminary), has been professor of Old Testament at Providence Seminary since 1984 and president of the College and Seminary since 2001. A contributor to the New International Dictionary of Old Testament Theology and Exegesis, he is preparing forthcoming commentaries on Chronicles (Herald Press) and on 1 & 2 Kings (Zondervan) and his commentary on The Book of Job (Cornerstone Biblical Commentary).

Karen H. Jobes is the Gerald F. Hawthorne Professor of New Testament Greek and Exegesis at Wheaton College. She is the author of many articles and several books, including The NIV Application Commentary: Esther.

Roy Gane (PhD, University of California, Berkeley) is professor of Hebrew Bible and ancient near eastern languages at the Theological Seminary of Andrews University. He is author of a number of scholarly articles and several books including God's Faulty Heroes (Review Herald, 1996-on the biblical book of Judges), Altar Call (Diadem, 1999-on the Israelite sanctuary services and their meaning for Christians), Ritual Dynamic Structure (Gorgias Press, 2004), Leviticus, Numbers (NIV Application Commentary; Zondervan, 2004), and Cult and Character: Purification Offerings, Day of Atonement, and Theod

Peter Enns (Ph.D., Harvard University) is senior fellow of biblical studies for The BioLogos Foundation, an organization founded by Francis Collins that explores, promotes, and celebrates the integration of science and Christian faith. He was professor of Old Testament and Biblical hermeneutics at Westminster Theological Seminary, Philadelphia. He is the author of Poetry and Wisdom; Exodus Retold; Inspiration and Incarnation: Evangelicals and the Problem of the Old Testament and Exodus (NIV Application Commentary series).
His latest works are Ecclesiastes (Two Horizons Commentary); Three Views on the New Testaments Use of the Old Testament co-written with Walter Kaiser and Darrell Bock and The Evolution of Adam: What the Bible Does and Doesn't Say about Human Origins (Brazos, 2012)
Koorong -Editorial Review.