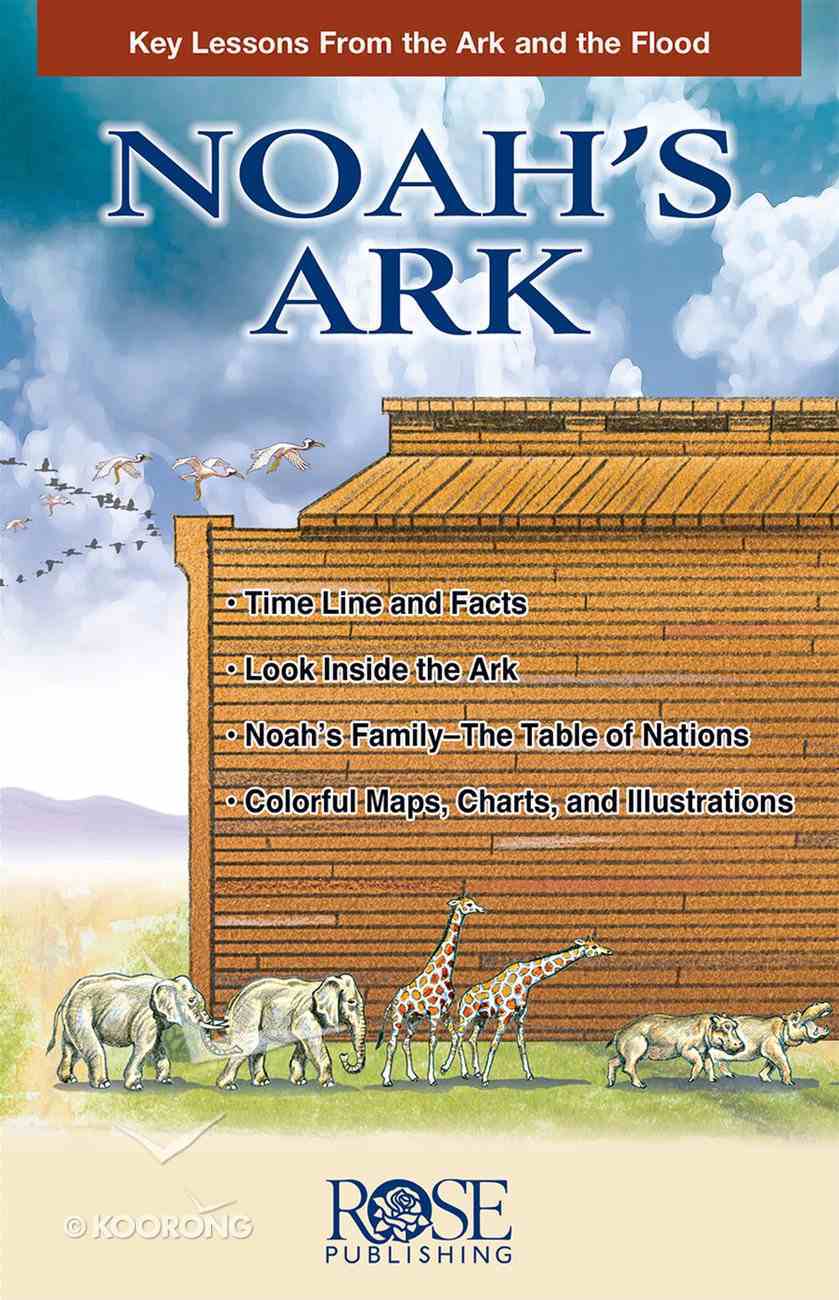 This Noah's Ark Pamphlet is a booklet that shows a Noah's Ark picture drawn to the size and description in the Bible in Genesis 5.

includes a fold-out picture that compares the massive Ark to common objects. Noah's Ark was longer than a football field or a soccer field, in fact 50 feet longer. Noah's Ark was 450 feet long (138 meters), and 75 feet wide (23 meters). Noah's Ark was wider than a semi-trailer truck.
This Noah's Ark Pamphlet shows you the inside of Noah's ark based on the biblical description. What we know about the layout and floor plan of the Ark is shown in this fold-out Noah's Ark picture: We know the dimensions, the height, length, and width. We know it had 3 decks, and that Noah's Ark held animals for more than a year. This incredible Noah's Ark diagram is perfect for Sunday school lessons, Bible studies, and homeschool curriculum.

So make yourself an ark of cypress wood;
make rooms in it and coat it with pitch inside and out.
This is how you are to build it:
The ark is to be three hundred cubits long,
fifty cubits wide and thirty cubits high.
Make a roof for it, leaving below the roof an opening
one cubit high all around.
Put a door in the side of the ark
and make lower, middle and upper decks.
-Genesis 5:14-16
The Noah's Ark booklet shows the massive ark and and artist's rendition of the inside of the Ark. It explains how Noah could house all of the animals on board, it also shows the size of Noah's Ark compared to giraffes, elephants and hippos.

Noah's Ark Pamphlet Includes A Timeline of Events Timeline: Noah's Ark and the Flood God told Noah to build the Ark, which took about 100 years. Noah was about 500-600 years old. Noah, his family and the animals enter the Ark. After 7 Days God shuts the door. 40 Days and Nights of the Flood. 110 Days Water Covers all of the Earth 74 Days the Water Goes Down and the Ark Rests on Mt. Ararat. 40 Days later the Tops of the Mountains Are Seen Timeline: Noah, His Family and the Animals Leave Ark Noah sends a raven and a dove to see if the waters have gone down enough. Noah waits another 22 Days. 57 Days Noah opens the roof of the Ark. God tells Noah he and his family and the animals can leave the Ark. God gives the Rainbow as a sign of God's Promise never again to destroy all creatures with a Flood. 4 Features of the Noah's Ark Pamphlet Family Tree of Noah - Noah's 3 Sons and the Table of Nations Map Where is Noah's Ark Today? Includes a Map of Turkey, Armenia, Georgia and Iran. How Noah's Ark was built. How long it took to build Noah's Ark. God's Covenant with Noah: The Rainbow Sign of God's Promise Ancient Flood Stories From Other Countries - The records of many ancient cultures support the belief in a massive Flood. FAQs: Noah's Ark Timeline Inside Noah's Ark: An Artist's Picture of the interior of Noah's Ark

The Fruit of the Spirit (Rose Guide Series)
Pamphlet