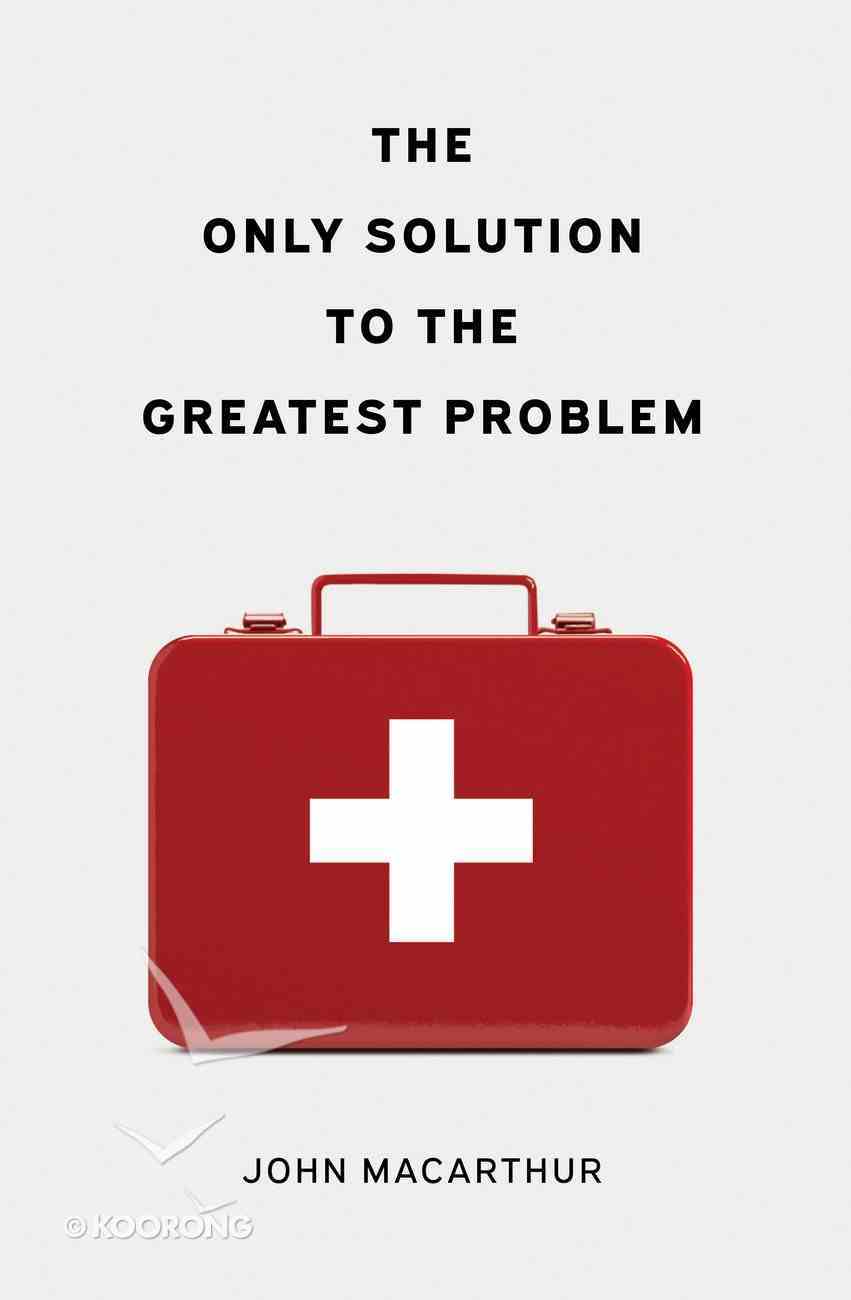 Only Solution to the Greatest Problem, the ESV (25 Pack)

: SIN IS THE GREATEST PROBLEM FACING HUMANITY Sin has caused wars between nations, conflict between individuals and groups, fear and anxiety, illness and death, and all kinds of natural and human-influenced disasters. In the Bible, the beginning chapters of...

Anxious For Nothing
John Macarthur
Paperback

Sin has caused wars between nations, conflict between individuals and groups, fear and anxiety, illness and death, and all kinds of natural and human-influenced disasters.

In the Bible, the beginning chapters of the book of Genesis report that the curse of sin after the Fall of Adam and Eve disrupted three basic relationships. First, men and women were separated from God when they became subject to spiritual death (Genesis 3:613). Second, they became at odds with nature. From then on it would resist their efforts to cultivate and control it (Genesis 3:1719). Third, people were separated from each other as sin brought envy and conflict into the world.

Everyone who dies, no matter from what cause, dies as a victim of sin. Romans 6:23 says, The wages of sin is death. Every human being is subject to the fearful power of sin.

THE DEFINITION AND CHARACTERISTICS OF SIN

The definition of sin is simple: sin is lawlessness
(1 John 3:4). Practicing sin is living as if there were no God and no law. It is arrogantly living on ones own terms, not being bound by Gods standards. Sin is not only open disregard of Gods Law, but also a defiling or polluting of the divine standard. Sin makes a persons soul stained with guilt and unrighteousness.

Sin is rebellion against God. Scripture describes those who rebel as people who walk contrary to God and defy Him (Leviticus 26:27). If sinners had their way, they would go as far as overthrowing God, which is what Satan attempted to do (Isaiah 14:1221).

Sin causes multitudes of people to live each day in absolute ingratitude, despite the fact that God created them to praise and glorify Him forevera loftier purpose than they could ever imagine on their own. All people owe their very existence and all that they have to God. Acts 17:28 says, For In him we live and move and have our being ... For we are indeed his offspring.

THE EXTENT OF SIN

The book of Romans clearly states that sins extentis universal: None is righteous, no, not one; no one understands; no one seeks for God. All have turned aside, together they have become worthless; no one does good, not even one (Romans 3:1012).

When we enter this world, we are already sinners. Sin is in our natures, woven into the fabric of our lives. Thats because we are all descendants of Adam, and as such, we all bear his corruption.

As if it werent bad enough that humanitys fall intosin subjected the whole creation to many miseriesand hardships (Genesis 3:824; Romans 8:1822), the most devastating result of sin is that it has the power to condemn the soul to eternal punishment and separation from God in hell.

With sin, humanity has a horrible, pervasive, incurable spiritual disease that cannot be defeated by human means (Jeremiah 13:23). Men and women in their own strength cannot cure the sin that is within them because their minds and consciences are defiled and depraved. There is simply no human remedy for the problem of sin. It will not be cured by any acts
of human will, any programs of moral reformation or educational renewal, no pieces of legislation, no efforts of man-made counseling and consultation, nor any deeds of self-righteousness.

But if humans cant cure themselves of sin, what can they do about it? The answer is found in Romans 6:23: For the wages of sin is death, but the free gift of God is eternal life in Christ Jesus our Lord.

The apostle Paul expresses two absolute truths in that verse. First, he reminds us that spiritual death results from sin. It is the rightful destiny of every life that is lived apart from God. Second, the verse tells in one concise statement the remedy for sins effects salvation freely granted through Jesus Christ. Paul writes in the book of Ephesians: For by grace you have been saved through faith. And this is not your own doing; it is the gift of God, not a result of works, so that no one may boast (Ephesians 2:89).

The gospelthe good news of Jesus Christoffers the only solution to the stark reality of sin. Because of Gods immeasurable love for his creation, heprovided a way for all humanity to experience the forgiveness of sins and eternal life. Jesus is the way, and the truth, and the life. Not one person will be rid of their sin except through believing in the life, death, and resurrection of Jesus Christ (John 14:6).

Jesus was not just an ordinary person, prophet, or Jewish scholar. He was the perfect, sinless Son of GodGod incarnate. Jesus was the only one who could take our place on the cross, and he died the death that we deserve for our rebellion against God. Because of Jesuss sacrifice, those who repent of their sin and trust in Him alone for salvation receive the good news: Their sins are forever washed away, and they are adopted into Gods family as beloved children.

The darkness of sin is no match against the light of Jesus Christ and the good news of salvation that He offers. Turn and repent of your sinful rebellion against God today, and receive new life and the promise of eternity with our loving Savior.

Heavenly Father, I believe that Jesus Christ is your Son, and that he died on the cross to save me from my sin. I believe that he rose again to life, and that he invites me to live forever with him as part of your family. Because of what Jesus has done, I ask you to forgive me of my sin and allow me to recieve eternal life. Help me to live in a way that pleases and honors you. Amen.

If you would like more information about the good news that Jesus offers, we encourage you to meet with a Christian friend and begin attending a local church. Find someone who is knowledgeable about the Bible and who can help you learn more about God. If you are already a follower of Jesus, go and share your faithtell everyone you meet about the amazing solution that God has provided in spite of your sin! Become a friend to those who are unbelieversserve as a disciple to those who have expressed interest in hearing more about the Christian faith.

Widely known for his thorough, candid approach to teaching God's Word, John MacArthur is a popular author and conference speaker and has served as pastor-teacher of Grace Community Church in Sun Valley, California since 1969. John and his wife, Patricia, have four grown children and fourteen grandchildren.

John's pulpit ministry has been extended around the globe through his media ministry, Grace to You, and its satellite offices in seven countries. In addition to producing daily radio programs for nearly 2,000 English and Spanish radio outlets worldwide, Grace to You distributes books, software, audiotapes, and CDs by John MacArthur.

John is president of The Master's College and Seminary and has written hundreds of books and study guides, each one biblical and practical. Best-selling titles include The Gospel According to Jesus, Truth War, The Murder of Jesus, Twelve Ordinary Men, Twelve Extraordinary Women, and The MacArthur Study Bible, a 1998 ECPA Gold Medallion recipient.